The Digibind brand name has been discontinued in the U.S. If generic versions of this product have been approved by the FDA, there may be generic equivalents available.

Digibind, Digoxin Immune Fab (Ovine), is a sterile lyophilized powder of antigen binding fragments (Fab) derived from specific antidigoxin antibodies raised in sheep. Production of antibodies specific for digoxin involves conjugation of digoxin as a hapten to human albumin. Sheep are immunized with this material to produce antibodies specific for the antigenic determinants of the digoxin molecule. The antibody is then papain-digested and digoxin-specific Fab fragments of the antibody are isolated and purified by affinity chromatography. These antibody fragments have a molecular weight of approximately 46,200.

Each vial, which will bind approximately 0.5 mg of digoxin (or digitoxin), contains 38 mg of digoxin-specific Fab fragments derived from sheep plus 75 mg of sorbitol as a stabilizer and 28 mg of sodium chloride. The vial contains no preservatives.

Digibind is administered by intravenous injection after reconstitution with Sterile Water for Injection (4 mL per vial).

After intravenous injection of Digoxin Immune Fab (Ovine) in the baboon, digoxin-specific Fab fragments are excreted in the urine with a biological half-life of about 9 to 13 hours.1 In humans with normal renal function, the half-life appears to be 15 to 20 hours.2 Experimental studies in animals indicate that these antibody fragments have a large volume of distribution in the extracellular space, unlike whole antibody which distributes in a space only about twice the plasma volume.1 Ordinarily, following administration of Digibind, improvement in signs and symptoms of digitalis intoxication begins within one-half hour or less.2,3,4,5

Digibind binds molecules of digoxin, making them unavailable for binding at their site of action on cells in the body. The Fab fragment-digoxin complex accumulates in the blood, from which it is excreted by the kidney. The net effect is to shift the equilibrium away from binding of digoxin to its receptors in the body, thereby reversing its effects.

Indications and Usage for Digibind

There are no known contraindications to the use of Digibind.

Suicidal ingestion often involves more than one drug; thus, toxicity from other drugs should not be overlooked.

One should consider the possibility of anaphylactic, hypersensitivity, or febrile reactions. If an anaphylactoid reaction occurs, the drug infusion should be discontinued and appropriate therapy initiated using aminophylline, oxygen, volume expansion, diphenhydramine, corticosteroids, and airway management as indicated. The need for epinephrine should be balanced against its potential risk in the setting of digitalis toxicity.

Since the Fab fragment of the antibody lacks the antigenic determinants of the Fc fragment, it should pose less of an immunogenic threat to patients than does an intact immunoglobulin molecule. Patients with known allergies would be particularly at risk, as would individuals who have previously received antibodies or Fab fragments raised in sheep. Papain is used to cleave the whole antibody into Fab and Fc fragments, and traces of papain or inactivated papain residues may be present in Digibind. Patients with allergies to papain, chymopapain, or other papaya extracts also may be particularly at risk.

Skin testing for allergy was performed during the clinical investigation of Digibind. Only one patient developed erythema at the site of skin testing, with no accompanying wheal reaction; this individual had no adverse reaction to systemic treatment with Digibind. Since allergy testing can delay urgently needed therapy, it is not routinely required before treatment of life-threatening digitalis toxicity with Digibind.

Skin testing may be appropriate for high risk individuals, especially patients with known allergies or those previously treated with Digoxin Immune Fab (Ovine). The intradermal skin test can be performed by:

The scratch test procedure is performed by placing one drop of a 1:100 dilution of Digibind on the skin and then making a ¼-inch scratch through the drop with a sterile needle. The scratch site is inspected at 20 minutes for an urticarial wheal surrounded by erythema.

Standard therapy for digitalis intoxication includes withdrawal of the drug and correction of factors that may contribute to toxicity, such as electrolyte disturbances, hypoxia, acid-base disturbances, and agents such as catecholamines. Also, treatment of arrhythmias may include judicious potassium supplements, lidocaine, phenytoin, procainamide, and/or propranolol; treatment of sinus bradycardia or atrioventricular block may involve atropine or pacemaker insertion. Massive digitalis intoxication can cause hyperkalemia; administration of potassium supplements in the setting of massive intoxication may be hazardous (see Laboratory Tests). After treatment with Digibind, the serum potassium concentration may drop rapidly2 and must be monitored frequently, especially over the first several hours after Digibind is given (see Laboratory Tests).

The elimination half-life in the setting of renal failure has not been clearly defined. Patients with renal dysfunction have been successfully treated with Digibind.4 There is no evidence to suggest the time-course of therapeutic effect is any different in these patients than in patients with normal renal function, but excretion of the Fab fragment-digoxin complex from the body is probably delayed. In patients who are functionally anephric, one would anticipate failure to clear the Fab fragment-digoxin complex from the blood by glomerular filtration and renal excretion. Whether failure to eliminate the Fab fragment-digoxin complex in severe renal failure can lead to reintoxication following release of newly unbound digoxin into the blood is uncertain. Such patients should be monitored for a prolonged period for possible recurrence of digitalis toxicity.

Patients with intrinsically poor cardiac function may deteriorate from withdrawal of the inotropic action of digoxin. Studies in animals have shown that the reversal of inotropic effect is relatively gradual, occurring over hours. When needed, additional support can be provided by use of intravenous inotropes, such as dopamine or dobutamine, or vasodilators. One must be careful in using catecholamines not to aggravate digitalis toxic rhythm disturbances. Clearly, other types of digitalis glycosides should not be used in this setting.

Redigitalization should be postponed, if possible, until the Fab fragments have been eliminated from the body, which may require several days. Patients with impaired renal function may require a week or longer.

Digibind will interfere with digitalis immunoassay measurements.6 Thus, the standard serum digoxin concentration measurement can be clinically misleading until the Fab fragment is eliminated from the body.

There have been no long-term studies performed in animals to evaluate carcinogenic potential.

Digibind has been successfully used in infants with no apparent adverse sequelae. As in all other circumstances, use of this drug in infants should be based on careful consideration of the benefits of the drug balanced against the potential risk involved.

Of the 150 subjects in an open-label study of Digibind, 42% were 65 and over, while 21% were 75 and over. In a post-marketing surveillance study that enrolled 717 adults, 84% were 60 and over, and 60% were 70 and over. No overall differences in safety or effectiveness were observed between these subjects and younger subjects, and other reported clinical experience has not identified differences in responses between the elderly and younger patients, but greater sensitivity of some older individuals cannot be ruled out.

Allergic reactions to Digibind have been reported rarely. Patients with a history of allergy, especially to antibiotics, appear to be at particular risk (see WARNINGS). In a few instances, low cardiac output states and congestive heart failure could have been exacerbated by withdrawal of the inotropic effects of digitalis. Hypokalemia may occur from re-activation of (sodium, potassium) ATPase (see Laboratory Tests). Patients with atrial fibrillation may develop a rapid ventricular response from withdrawal of the effects of digitalis on the atrioventricular node.4

The dosage of Digibind varies according to the amount of digoxin (or digitoxin) to be neutralized. The average dose used during clinical testing was 10 vials.

Twenty (20) vials (760 mg) of Digibind is adequate to treat most life-threatening ingestions in both adults and children. However, in children it is important to monitor for volume overload. In general, a large dose of Digibind has a faster onset of effect but may enhance the possibility of a febrile reaction. The physician may consider administering 10 vials, observing the patient’s response, and following with an additional 10 vials if clinically indicated.

Dosage for Toxicity During Chronic Therapy

For adults, six vials (228 mg) usually is adequate to reverse most cases of toxicity. This dose can be used in patients who are in acute distress or for whom a serum digoxin or digitoxin concentration is not available. In infants and small children (≤20 kg) a single vial usually should suffice.

Methods for calculating the dose of Digibind required to neutralize the known or estimated amount of digoxin or digitoxin in the body are given below (see DOSAGE CALCULATION section).

When determining the dose for Digibind, the following guidelines should be considered:

Each vial of Digibind contains 38 mg of purified digoxin-specific Fab fragments which will bind approximately 0.5 mg of digoxin (or digitoxin). Thus one can calculate the total number of vials required by dividing the total digitalis body load in mg by 0.5 mg/vial (see Formula 1).

Table 2 gives dosage estimates in number of vials for adult patients for whom a steady-state serum digoxin concentration is known. The dose of Digibind (in number of vials) represented in Table 2 can be approximated using the following formula:

Table 3 gives dosage estimates in milligrams for infants and small children based on the steady-state serum digoxin concentration. The dose of Digibind represented in Table 3 can be estimated by multiplying the dose (in number of vials) calculated from Formula 2 by the amount of Digibind contained in a vial (38 mg/vial) (see Formula 3). Since infants and small children can have much smaller dosage requirements, it is recommended that the 38-mg vial be reconstituted as directed and administered with a tuberculin syringe. For very small doses, a reconstituted vial can be diluted with 34 mL of sterile isotonic saline to achieve a concentration of 1 mg/mL.

*Dilution of reconstituted vial to 1 mg/mL may be desirable.

Calculation Based on Steady-State Digitoxin Concentration

The dose of Digibind for digitoxin toxicity can be approximated using the following formula:

If the dose based on ingested amount differs substantially from that calculated from the serum digoxin or digitoxin concentration, it may be preferable to use the higher dose.

The contents in each vial to be used should be dissolved with 4 mL of Sterile Water for Injection, by gentle mixing, to give a clear, colorless, approximately isosmotic solution with a protein concentration of 9.5 mg/mL. Reconstituted product should be used promptly. If it is not used immediately, it may be stored under refrigeration at 2° to 8°C (36° to 46°F) for up to 4 hours. The reconstituted product may be diluted with sterile isotonic saline to a convenient volume. Parenteral drug products should be inspected visually for particulate matter and discoloration prior to administration, whenever solution and container permit.

Digibind, Digoxin Immune Fab (Ovine), is administered by the intravenous route over 30 minutes. It is recommended that it be infused through a 0.22-micron membrane filter to ensure no undissolved particulate matter is administered. If cardiac arrest is imminent, it can be given as a bolus injection.

How is Digibind Supplied 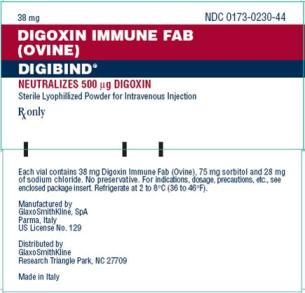