Each 5 mL (one teaspoonful) contains:

Dihydrocodeine is a semisynthetic narcotic analgesic/antitussive related to codeine, with multiple actions qualitatively similar to those of codeine: the most prominent of these involve the central nervous system and organs with smooth muscle components.

Chlorpheniramine is an alkylamine type antihistamine. This group of antihistamines is among the most active histamine antagonists and is generally effective in relatively low doses. The drugs are not so prone to produce drowsiness and are therefore among the most suitable agents for daytime use, but a significant proportion of patients do experience the effect.

Pseudoephedrine Hydrochloride is a sympathomimetic amine, which acts predominantly on alpha receptors and has little action on beta-receptors. It therefore functions as an oral nasal decongestant with minimal CNS stimulation.

Indications and Usage for Coldcough Syrup

Coldcough™ is indicated for the temporary relief of cough and nasal congestion associated with upper respiratory tract infections and allergies.

This combination product is contraindicated in patients with hypersensitivity to dihydrocodeine, codeine, or any of the active or inactive components listed above, or in any situation where opioids are contraindicated including significant respiratory depression (in unmonitored settings or in the absence of resuscitation equipment), acute or severe bronchial asthma or hypercapnia, and paralytic ileus.

Antihistamines are contraindicated in patients receiving antihypertensive or antidepressant drugs containing monoamine oxidase inhibitors MAOI (or for 14 days after stopping MAOI therapy), since these agents may prolong and intensify the anticholinergic and CNS depressant effects of antihistamines (see DRUG INTERACTIONS).

Antihistamines should not be used to treat or lower respiratory tract symptoms or be given to premature or newborn infants.

Do not exceed recommended dosage. If nervousness, dizziness, or sleeplessness occurs, discontinue use and consult a doctor. If symptoms do not improve within 7 days or are accompanied by a fever, consult a doctor.

Considerable caution should be exercised in patients with hypertension, diabetes mellitus, ischemic heart disease, hyperthyroidism, increased intraocular pressure, and prostatic hypertrophy. The elderly (60 years and older) are more likely to exhibit adverse reactions. Antihistamines may cause excitability, especially in children. At dosages higher than the recommended dose, nervousness, dizziness, or sleeplessness may occur.

Dihydrocodeine may impair the mental and/or physical abilities required for the performance of potentially hazardous tasks such as driving a car or operating machinery.

Respiratory depression is the most dangerous acute reaction produced by opioid agonist preparations, although it is rarely severe with usual doses. Opioids decrease the respiratory tidal volume, minute ventilation, and sensitivity to carbon dioxide. Respiratory depression occurs most frequently in elderly or debilitated patients, usually after large initial doses in non-tolerant patients, or when opioids are given in conjunction with other agents that depress respiration. This combination product should be used with caution in patients with significant chronic obstructive pulmonary disease or cor pulmonale and in patients with a substantially decreased respiratory reserve, hypoxia, hypercapnia, or respiratory depression.

Dihydrocodeine, like all opioid analgesics, may cause hypotension in patients whose ability to maintain blood pressure has been compromised by a depleted blood volume or who received concurrent therapy with drugs such as phenothiazine or other agents which compromise vasomotor tone. Coldcough™ may produce orthostatic hypotension in ambulatory patients. This combination product should be administered with caution to patients with circulatory shock since vasodilatation produced by the drug may further reduce cardiac output and blood pressure.

Dihydrocodeine can produce drug dependence of the codeine type and has the potential for being abused. This product should be prescribed and administered with the appropriate degree of caution (See DRUG ABUSE AND DEPENDENCE).

This combination product should be used with caution in elderly or debilitated patients or those with any of the following conditions: adrenocortical insufficiency (e.g., Addison's disease); asthma; central nervous system depression or coma; chronic obstructive pulmonary disease; decreased respiratory reserve (including emphysema, severe obesity, cor pulmonale, or kyphoscoliosis); delirium tremens; diabetes; head injury; hypotension; hypertension; increased intracranial pressure; myxedema or hypothyroidism; prostatic hypertrophy or urethral structure; and toxic psychosis. The benefits and risks of opioids in patients taking monoamine oxidase inhibitors (or for 14 days after stopping MAOI therapy) and in those with a history of drug abuse should be carefully considered. This combination product may aggravate convulsions in patients with convulsive disorders, and like all opioids, may induce or aggravate seizures in some clinical settings.

Patients receiving other opioid analgesics, sedatives or hypnotics, muscle relaxants, general anesthetics, centrally acting anti-emetics, phenothiazines or other tranquilizers, or alcohol concomitantly with this product may exhibit additive depressant effects on the central nervous system. When such combination therapy is contemplated, the dose of one or both agents should be reduced. Concomitant use of dihydrocodeine and antihistamines with alcohol and other CNS depressants may have an additive effect.

Dihydrocodeine, like all opioids, interact with monoamine oxidase inhibitors causing central nervous system excitation and hypertension. MAO inhibitors (or for 14 days after stopping MAOI therapy) and beta-adrenergic blockers increase the effects of sympathomimetics.

Patients receiving Coldcough™ should be given the following information:

Babies born to mothers who have been taking opioids regularly prior to delivery will be physically dependent. The withdrawal signs include irritability and excessive crying, tremors, hyperactive reflexes, increased respiratory rate, increased stools, sneezing, yawning, vomiting and fever.

The intensity of the syndrome does not always correlate with the duration of the maternal opioid use or dose. There is no consensus on the best method of managing withdrawal.

Chlorpromazine 0.7-1.0 mg/kg q6h, phenobarbital 2 mg/kg q6h, and paregoric 2-4 drops/kg q4h, have been used to treat withdrawal symptoms in infants. The duration of therapy is 4 to 28 days, with dosages decreased as tolerated.

Coldcough™ is not recommended for use by women during and immediately before labor and delivery because oral opioids may cause respiratory depression in the newborn.

Due to the possible passage of the ingredients into breast milk, this product should not be given to nursing mothers.

When physicians prescribe codeine-containing drugs to nursing women, they should inform their patients about the potential risks and the signs of morphine overdose. Nursing women taking codeine need to carefully watch their infants for signs of morphine overdose and seek medical attention immediately if the infant develops increased sleepiness (more than usual), difficulty breastfeeding or breathing, or decreased tone (limpness). Nursing mothers may also experience overdose symptoms such as extreme sleepiness, confusion, shallow breathing or severe constipation. When prescribing codeine to nursing mothers, physicians should choose the lowest effective dose the shortest period of time and should closely monitor mother-infant pairs.

Drug metabolism is a complex process involving multiple genetic, environmental and physiologic factors. Limited evidence suggests that individuals who are ultra-rapid metabolizers (those with a specific CYP2D6 genotype) may convert codeine to its active metabolite, morphine, more rapidly and completely than other people. In nursing mothers, this metabolism can result in higher than expected serum and breast milk morphine levels. One published case report of an infant death raises concern that nursing babies may be at increased risk of morphine overdose if their mothers are taking codeine and are ultra-rapid metabolizers of the drug.

Safety and effectiveness in the pediatric population, under 6, have not been established. This product is not recommended for use in children under two years of age. Children under two years may be more susceptible to respiratory arrest, coma, and death. Use of antihistamines is not recommended in infants. This age group may be at higher risk than other age groups because of an increased susceptibility to anticholinergic effects such as CNS excitation and increased tendency toward convulsions. In older children taking antihistamines, a paradoxical reaction characterized by hyperexcitability may occur. Very young children may be more susceptible to the effects, especially the vasopressor effects of sympathomimetic amines.

Coldcough™ should be given with caution to the elderly.

Coldcough™ should be given with caution to patients with hepatic insufficiency. Since dihydrocodeine is metabolized by the liver the effects of this combination product should be monitored closely in such patients.

Coldcough™ should be used with caution and at reduced dosage in the presence of impaired renal function.

Opioids may cause spasms of the sphincter of Oddi and should be used with caution in patients with biliary tract disease, including pancreatitis.

The most frequently observed adverse reactions with dihydrocodeine include lightheadedness, dizziness, drowsiness, headache, fatigue, sedation, sweating, nausea, vomiting, constipation, pruritus, and skin reactions. With the exception of constipation, tolerance develops to most of these effects. Other reactions that have been observed with dihydrocodeine or opioids include respiratory depression, orthostatic hypotension, cough suppression, confusion, diarrhea, miosis, abdominal pain, dry mouth, indigestion, anorexia, spasm of biliary tract, and urinary retention. Physical and psychological dependence are possibilities.

Other reactions observed with the ingredients in Coldcough™ include lassitude, nausea, giddiness, dryness of the mouth, blurred vision, cardiac palpitations, flushing, increased irritability or excitement (especially in children).

May be habit forming. Dihydrocodeine can produce drug dependence of the codeine type and, therefore, has the potential for being abused. Psychic dependence, physical dependence and tolerance may develop upon repeated administration of Coldcough™, and it should be prescribed and administered with the same degree of caution appropriate to the use of other narcotic drugs.

Pseudoephedrine is banned and tested for by the U.S. Olympic Committee (USOC) and the National Collegiate Athletic Association (NCAA).

An overdose of Coldcough™ is a potentially lethal poly-drug overdose situation, and consultation with a regional Poison Control Center is recommended.

A listing of the Poison Control Centers can be found in a standard reference such as the Physician's Desk Reference®.

Symptoms of an overdose include pinpoint pupils, respiratory depression, extreme somnolence progressing to stupor, loss of consciousness or coma, skeletal muscle flaccidity, cold and clammy skin and other symptoms common with narcotic overdosage. Convulsions, cardiovascular collapse, and death may occur. A single case of acute rhabdomyolysis associated with an overdose of dihydrocodeine has been reported.

Immediate treatment of an overdose of Coldcough™ includes support of cardiovascular function and measures to reduce further drug absorption. Vomiting should be induced with syrup of ipecac. If the patient is alert and has adequate laryngeal reflexes, oral activated charcoal should follow. The first dose should be accompanied by an appropriate cathartic. Gastric lavage may be necessary. Hypotension is usually hypovolemic and should be treated with fluids. Endotracheal intubation and artificial respiration may be necessary. The pure opioid antagonist naloxone or nalmexone is a specific antidote against respiratory depression that results from opioid overdose. Opioid antagonists should not be given in the absence of clinically significant respiratory or circulatory depression secondary to opioid overdose. They should be administered cautiously to persons who are known, or suspected to be, physically dependent on any opioid agonist including dihydrocodeine. In such cases, an abrupt or complete reversal of opioid effects may precipitate an acute abstinence syndrome. The prescribing information for the specific opioid antagonist should be consulted for details of their proper use.

These doses may be given every 4 to 6 hours as needed.

This product is not indicated for use in children under 6 years of age. (see PRECAUTIONS, Pediatric Use.)

How is Coldcough Syrup Supplied

KEEP THIS AND ALL MEDICATIONS OUT OF REACH OF CHILDREN. IN CASE OF ACCIDENTAL OVERDOSE, SEEK PROFESSIONAL ASSISTANCE OR CONTACT A POISON CONTROL CENTER IMMEDIATELY.

Preserve and dispense in a tight, light-resistant container with a child-resistant closure, as defined in the USP/NF.

All prescription substitutions using this product shall be pursuant to state statutes as applicable.

This is not an Orange Book product.

Each 5 mL (one teaspoonful) for
oral administration contains: 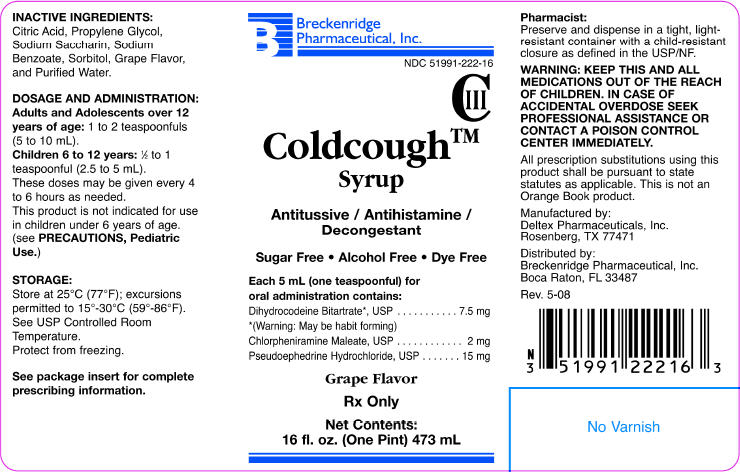