Indications and Usage for Cablivi

Cablivi is indicated for the treatment of adult patients with acquired thrombotic thrombocytopenic purpura (aTTP), in combination with plasma exchange and immunosuppressive therapy.

Cablivi should be administered upon initiation of plasma exchange therapy. The recommended dose of Cablivi is as follows:

Discontinue Cablivi if the patient experiences more than 2 recurrences of aTTP, while on Cablivi.

Avoid concomitant use of antiplatelet agents or anticoagulants [see Warnings and Precautions (5.1)].

Discontinuation for Surgery and Other Interventions

The first dose of Cablivi should be administered by a healthcare provider as a bolus intravenous injection. Administer subsequent doses subcutaneously in the abdomen. Avoid injections around the navel. Do not administer consecutive injections in the same abdominal quadrant.

Patients or caregivers may inject Cablivi subcutaneously after proper training on the preparation and administration of Cablivi, including aseptic technique [see Instructions for Use].

For injection: 11 mg as a white lyophilized powder in a single-dose vial.

In clinical studies, severe bleeding adverse reactions of epistaxis, gingival bleeding, upper gastrointestinal hemorrhage, and metrorrhagia were each reported in 1% of subjects. Overall, bleeding events occurred in approximately 58% of patients on Cablivi versus 43% of patients on placebo.

In the postmarketing setting, cases of life-threatening and fatal bleeding were reported in patients receiving Cablivi.

The risk of bleeding is increased in patients with underlying coagulopathies (e.g. hemophilia, other coagulation factor deficiencies). It is also increased with concomitant use of Cablivi with drugs affecting hemostasis and coagulation [see Drug Interactions (7) and Clinical Pharmacology (12.3)].

Avoid concomitant use of Cablivi with antiplatelet agents or anticoagulants. Interrupt use of Cablivi if clinically significant bleeding occurs. If needed, von Willebrand factor concentrate may be administered to rapidly correct hemostasis. If Cablivi is restarted, monitor closely for signs of bleeding.

Withhold Cablivi for 7 days prior to elective surgery, dental procedures or other invasive interventions. If emergency surgery is needed, the use of von Willebrand factor concentrate may be considered to correct hemostasis. After the risk of surgical bleeding has resolved, and Cablivi is resumed, monitor closely for signs of bleeding.

The following clinically significant adverse reactions are also discussed in other sections of the labeling:

The safety of Cablivi was evaluated in two placebo-controlled clinical studies (HERCULES, in which 71 patients received Cablivi; and TITAN, in which 35 patients received Cablivi). The data described below and in the Warnings and Precautions reflect exposure to Cablivi during the blinded periods of both studies, which include 106 patients with aTTP who received at least one dose, age 18 to 79 years, of whom 69% were female and 73% were White. The median treatment duration with Cablivi was 35 days (range 1–77 days).

Among 106 patients treated with Cablivi during the TITAN and HERCULES studies, serious bleeding adverse reactions reported in ≥2% patients included epistaxis (4%) and subarachnoid hemorrhage (2%).

Adverse reactions that occurred in ≥2% of patients treated with Cablivi and more frequently than in those treated with placebo across the pooled data from the two trials are summarized in Table 1. Urticaria was seen during plasma exchange.

As with all therapeutic proteins, there is potential for immunogenicity. The detection of antibody formation is highly dependent on the sensitivity and specificity of the assay. Additionally, the observed incidence of antibody (including neutralizing antibody) positivity in an assay may be influenced by several factors including assay methodology, sample handling, timing of sample collection, concomitant medications, and underlying disease. For these reasons, comparison of the incidence of antibodies to caplacizumab-yhdp in the studies described below, with the incidence of antibodies in other studies, or to other products, may be misleading.

The prevalence of pre-existing antibodies binding to caplacizumab-yhdp observed during clinical studies and during evaluation of commercially available human samples varied between 4% and 63%. In aTTP patients, pre-existing antibodies can be produced by the patient or can originate from donor plasma during plasma exchange. No clinically apparent impact of these pre-existing antibodies on clinical efficacy or safety was found. Treatment-emergent anti-drug antibodies (TE ADA) against caplacizumab-yhdp were detected in 3% of patients treated with Cablivi in the HERCULES study. In the HERCULES study, TE ADA were further characterized as having neutralizing potential. There was no clinically apparent impact on clinical efficacy or safety [see Clinical Pharmacology (12.3)].

The following adverse reactions have been identified during postapproval use of Cablivi. Because these reactions are reported voluntarily from a population of uncertain size, it is not always possible to reliably estimate their frequency or establish a causal relationship to caplacizumab-yhdp exposure.

Concomitant Use of Anticoagulants or Antiplatelet Agents

Concomitant use of Cablivi with any anticoagulant or antiplatelet agent may increase the risk of bleeding. Avoid concomitant use when possible. Assess and monitor closely for bleeding with concomitant use [see Warnings and Precautions (5.1) and Clinical Pharmacology (12.3)].

There are no available data on Cablivi use in pregnant women to inform a drug-associated risk of major birth defects and miscarriage. However, there are potential risks of hemorrhage in the mother and fetus associated with use of Cablivi (see Clinical Considerations). In animal reproduction studies, there was no evidence of adverse developmental outcomes with intramuscular administration of caplacizumab-yhdp during organogenesis in guinea pigs at exposures approximately 30 times the AUC in humans at the recommended subcutaneous injection dose of 11 mg (see Data).

Cablivi may increase the risk of bleeding in the fetus and neonate. Monitor neonates for bleeding [see Warnings and Precautions (5.1)].

Two separate reproduction studies were conducted in pregnant guinea pigs with administration of caplacizumab-yhdp during the organogenesis period.

In an embryo-fetal development study, caplacizumab-yhdp was administered intramuscularly at doses up to 20 mg/kg/day from gestational day (GD) 6 to GD 41 in guinea pigs. No maternal toxicity or adverse developmental outcomes were observed.

There is no information regarding the presence of caplacizumab-yhdp in human milk, the effects on the breastfed child or the effects on milk production.

The developmental and health benefits of breastfeeding should be considered along with the mother's clinical need for Cablivi and any potential adverse effects on the breastfed child from Cablivi, or from the underlying maternal condition.

The safety and effectiveness of Cablivi in pediatric patients have not been established.

Clinical studies of Cablivi did not include sufficient numbers of subjects aged 65 and over to determine whether they respond differently from younger subjects.

No formal studies with Cablivi have been conducted in patients with severe acute or chronic hepatic impairment and no data regarding the use of Cablivi in these populations are available. Due to a potential increased risk of bleeding, use of Cablivi in patients with severe hepatic impairment requires close monitoring for bleeding [see Warnings and Precautions (5.1)].

In case of overdose, based on the pharmacological action of Cablivi, there is the potential for an increased risk of bleeding [see Warnings and Precautions (5.1)]. Close monitoring for signs and symptoms of bleeding is recommended. If needed, the use of von Willebrand factor concentrate could be considered to correct hemostasis.

Caplacizumab-yhdp is a von Willebrand factor (vWF)-directed antibody fragment that consists of two identical humanized building blocks, linked by a three-alanine linker. Caplacizumab-yhdp is produced in Escherichia coli by recombinant DNA technology and has an approximate molecular weight of 28 kDa.

Caplacizumab-yhdp targets the A1-domain of vWF, and inhibits the interaction between vWF and platelets, thereby reducing both vWF-mediated platelet adhesion and platelet consumption.

Ristocetin cofactor (RICO) activity was used to assess vWF activity. Subcutaneous doses of caplacizumab-yhdp at greater than or equal to the approved recommended dosage to healthy subjects and patients with aTTP decreased RICO activity levels to below 20% approximately 4 hours post-dose. RICO activity returned to baseline values within 7 days of drug discontinuation.

Caplacizumab-yhdp decreased vWF antigen and factor VIII:C levels. These reductions were transient and returned to baseline upon cessation of treatment.

Caplacizumab-yhdp pharmacokinetics depends on the expression of the target vWF and are not dose proportional. Higher levels of vWF antigen increase the fraction of drug-target complex retained in the circulation. Steady-state was reached following the first administration of Cablivi in healthy subjects, with minimal accumulation. Following a single subcutaneous dose of 10 mg caplacizumab-yhdp to healthy subjects the mean (CV%) peak concentration (Cmax) was 528 (20%) ng/mL and AUC0–24 was 7951 (16%). Following subcutaneous dosing of 10 mg caplacizumab-yhdp daily for 14 days to healthy subjects, the mean (CV%) Cmax was 348 (30%) ng/mL and AUC0–τ was 6808 (26%) hr∙ng/mL.

The bioavailability of subcutaneous caplacizumab-yhdp is approximately 90%.

The maximum concentration was observed 6 to 7 hours after subcutaneous dosing of 10 mg caplacizumab-yhdp once daily in healthy subjects.

Caplacizumab-yhdp central volume of distribution is 6.33 L in patients with aTTP.

No clinically significant differences in the pharmacokinetics of caplacizumab-yhdp were observed in patients with pre-existing or treatment-emergent anti-drug antibodies.

No dedicated drug-drug interaction studies with caplacizumab-yhdp have been conducted.

No studies have been performed to evaluate the potential of caplacizumab-yhdp for carcinogenicity or genotoxicity.

Animal reproduction studies assessing the effects of caplacizumab-yhdp on male and female fertility have not been conducted.

The efficacy of Cablivi for the treatment of adult patients with acquired thrombotic thrombocytopenic purpura (aTTP) in combination with plasma exchange and immunosuppressive therapy was established in a pivotal multicenter, randomized, double-blind, placebo-controlled trial (HERCULES) (NCT02553317).

A total of 145 patients were enrolled in the HERCULES study; the median age was 45 (range: 18 to 79) years, 69% were female, 73% were White. Patients were randomized to either Cablivi (n=72) or placebo (n=73). Patients in both groups received plasma exchange and immunosuppressive therapy. Patients were stratified according the severity of neurological involvement (Glasgow Coma Scale score ≤12 or 13 to 15). Patients with sepsis, infection with E. coli 0157, atypical hemolytic uremic syndrome, disseminated intravascular coagulation or congenital thrombotic thrombocytopenic purpura were not eligible for enrollment.

Patients received a single 11 mg Cablivi bolus intravenous injection or placebo prior to the first plasma exchange on study, followed by a daily subcutaneous injection of 11 mg Cablivi or placebo after completion of plasma exchange, for the duration of the daily plasma exchange period and for 30 days thereafter. If after the initial treatment course, sign(s) of persistent underlying disease such as suppressed ADAMTS13 activity levels remained present, treatment was extended for 7 day intervals for a maximum of 28 days.

The median treatment duration with Cablivi was 35 days. 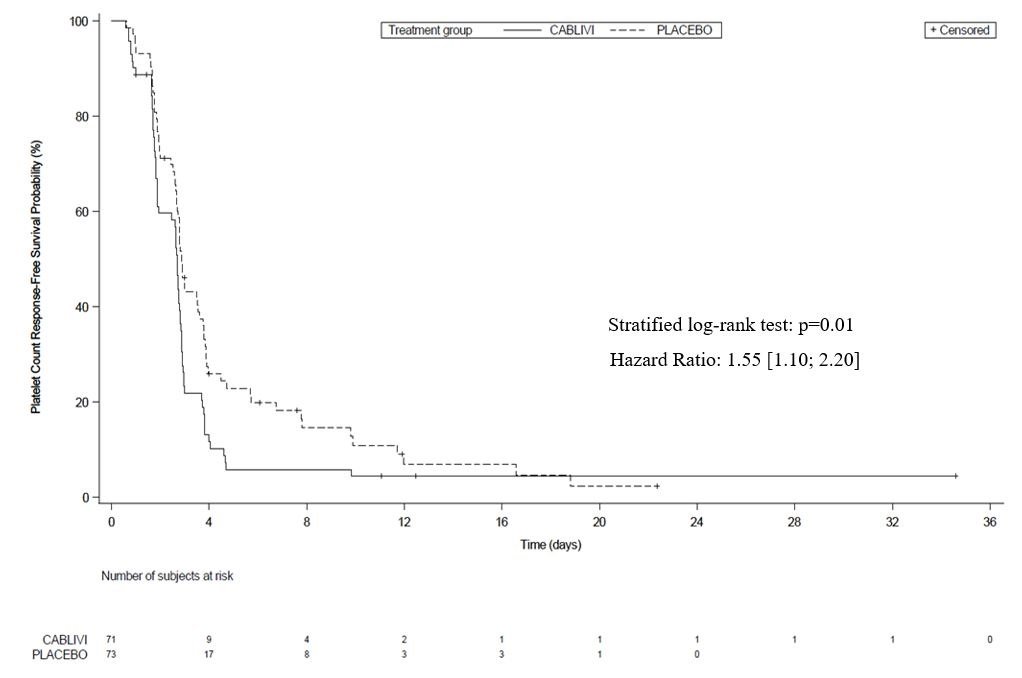 Treatment with Cablivi resulted in a lower number of patients with TTP-related death, recurrence of TTP, or at least one treatment-emergent major thromboembolic event (a composite endpoint) during the treatment period (see Table 2).

The proportion of patients with a recurrence of TTP in the overall study period (the drug treatment period plus the 28-day follow-up period after discontinuation of drug treatment) was lower in the Cablivi group (9/72 patients [13%]) compared to the placebo group (28/73 patients [38%] (p<0.001). In the 6 patients in the Cablivi group who experienced a recurrence of TTP during the follow-up period (i.e., a relapse defined as recurrent thrombocytopenia after initial recovery of platelet count (platelet count ≥150,000/µL) that required reinitiation of daily plasma exchange, occurring after the 30-day post daily plasma exchange period), ADAMTS13 activity levels were <10% at the end of the study drug treatment, indicating that the underlying immunological disease was still active at the time Cablivi was stopped.

Cablivi (caplacizumab-yhdp) for injection is a sterile, white, preservative-free, lyophilized powder in a single-dose vial. Each carton (NDC 58468-0225-1) contains:

Advise the patient to read the FDA-approved patient labeling (Instructions for Use).

For Intravenous and Subcutaneous Use

Must be reconstituted with diluent provided. 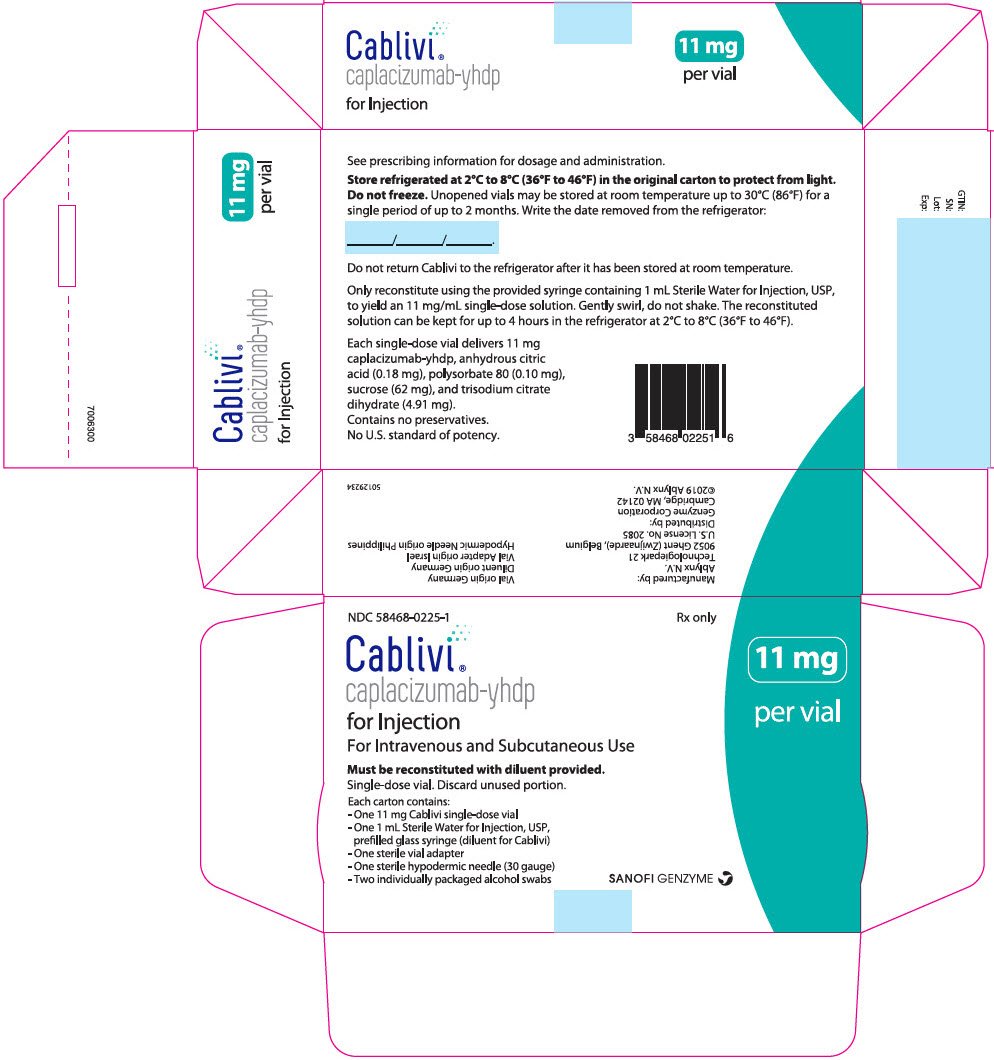