Indications and Usage for Aralast NP

The effect of augmentation therapy with any Alpha1-PI, including Aralast NP, on pulmonary exacerbations and on the progression of emphysema in alpha1-antitrypsin deficiency has not been conclusively demonstrated in randomized, controlled clinical trials.

Clinical data demonstrating the long-term effects of chronic augmentation and maintenance therapy with Aralast NP or ARALAST are not available.

Aralast NP is not indicated as therapy for lung disease in patients in whom severe congenital Alpha1-PI deficiency has not been established.

Aralast NP is available as a lyophilized powder in single dose vials containing 0.5 gram or 1 gram of functional Alpha1-PI.

Aralast NP is contraindicated in immunoglobulin A (IgA) deficient patients with antibodies against IgA, due to the risk of severe hypersensitivity.

Aralast NP may contain trace amounts of IgA. Patients with known antibodies to IgA, which can be present in patients with selective or severe IgA deficiency, have a greater risk of developing severe hypersensitivity and anaphylactic reactions. Closely follow the recommended infusion rate [see Dosage and Administration (2.3)]. Monitor vital signs continuously and observe the patient carefully throughout the infusion. Discontinue the infusion if hypersensitivity symptoms occur and administer appropriate emergency treatment. Have epinephrine and other appropriate supportive therapy available for the treatment of any acute anaphylactic or anaphylactoid reaction.

Because this product is made from human plasma, it may carry a risk of transmitting infectious agents, such as viruses, the variant Creutzfeldt-Jakob disease (vCJD) and theoretically, the Creutzfeldt-Jakob disease (CJD) agent. This also applies to unknown or emerging viruses and other pathogens. The risk of transmitting an infectious agent has been minimized by screening plasma donors for prior exposure to certain viruses, by testing for the presence of certain virus infections and by inactivating and removing certain viruses during the manufacturing process. Despite these measures, such products may still potentially transmit human pathogenic agents.

No seroconversions for hepatitis B or C (HBV or HCV) or human immunodeficiency virus (HIV) or any other known infectious agent were reported with the use of Aralast NP during clinical studies.

All infections thought by a physician to possibly have been transmitted by this product should be reported by the physician or other healthcare provider to Baxalta US Inc., at 1-800-423-2090 (in the U.S.).

Hypersensitivity reactions have been reported in patients following administration of ARALAST/Aralast NP [see Warnings and Precautions (5.1)].

Table 1 summarizes the number of subjects, the total number of infusions, and the rate of adverse reactions (ARs) associated with Aralast NP or ARALAST treatment for each clinical trial.

The most common ARs (defined as adverse reactions occurring in ≥5% of infusions) in each clinical trial are shown in Table 2.

ARALAST was evaluated for up to 96 weeks in 27 subjects with a congenital deficiency of Alpha1-PI and clinically evident emphysema. During the initial 10 weeks of the trial, subjects were randomized to receive either ARALAST or a commercially available preparation of Alpha1-PI (PROLASTIN).

Treatment-emergent elevations (> two times the upper limit of normal) in aminotransferases (ALT or AST), up to 3.7 times the upper limit of normal, were noted in 3 of 27 (11.1%) subjects. Elevations were transient lasting three months or less. No subject developed any evidence of viral hepatitis or hepatitis seroconversion while being treated with ARALAST, including 13 evaluable subjects who were not vaccinated against hepatitis B.

No clinically relevant alterations in blood pressure, heart rate, respiratory rate, or body temperature occurred during infusion of ARALAST. Mean hematology and routine clinical chemistry (other than ALT) laboratory parameters were little changed over the duration of the trial, with individual variations not clinically meaningful.

There were no serious adverse reactions or seroconversions reported for the ARALAST group during the 96 week trial period. No subject developed antibodies to Alpha1-PI.

The following adverse reactions have been identified during post-approval use of Aralast NP. Because these reactions are reported voluntarily from a population of uncertain size, it is not always possible to reliably estimate their frequency or establish a causal relationship to drug exposure.

In the U.S. general population, the estimated background risk of major birth defect and miscarriage in clinically recognized pregnancies is 2-4% and 15-20%, respectively.

There is no information regarding the presence of Aralast NP in human milk, the effect on the breastfed infant, or the effects on milk production.

The developmental and health benefits of breastfeeding should be considered along with the mother's clinical need for Aralast NP and any potential adverse effects on the breastfed infant from Aralast NP or from the underlying maternal condition.

Clinical studies of Aralast NP did not include sufficient numbers of subjects aged 65 and over to determine whether they respond differently from younger subjects. As for all patients, dosing for geriatric patients should be appropriate to their overall situation. Safety and effectiveness in patients over age 65 years of age have not been established.

To reduce the risk of viral transmission, the manufacturing process includes treatment with a solvent detergent (S/D) mixture [tri-n-butyl phosphate and polysorbate 80] to inactivate enveloped viral agents such as human immunodeficiency virus (HIV), hepatitis B (HBV), and hepatitis C (HCV). In addition, a nanofiltration step is incorporated into the manufacturing process to reduce the risk of transmission of enveloped and non-enveloped viral agents. Based on in vitro studies, the process used to produce Aralast NP has been shown to inactivate and/or partition various viruses as shown in Table 3 below.

The unreconstituted, lyophilized cake should be white or off-white to slightly yellow-green or yellow in color. When reconstituted as directed, the concentration of functionally active Alpha1-PI is ≥16 mg/mL and the specific activity is ≥0.55 mg active Alpha1-PI/mg total protein. The composition of the reconstituted product is as follows:

Each vial of Aralast NP has the functional activity, as determined by inhibition of porcine pancreatic elastase, stated on the label. The formulation contains no preservative. The pH of the solution ranges from 7.2 to 7.8. Product must only be administered intravenously.

Aralast NP administration is intended to inhibit serine proteases such as neutrophil elastase (NE), which is capable of degrading protein components of the alveolar walls and which is chronically present in the lung.

Alpha1-PI deficiency is an autosomal, co-dominant, hereditary disorder characterized by low serum and lung levels of Alpha1-PI.1,2,4,5 Severe forms of the deficiency are frequently associated with slowly progressive, moderate-to-severe panacinar emphysema that most often manifests in the third to fourth decades of life.1,2,3,5,6 However, an unknown percentage of individuals with severe Alpha1-PI deficiency are not diagnosed with or may never develop clinically evident emphysema during their lifetimes. Individuals with Alpha1-PI deficiency have little protection against NE released by neutrophils in their lower respiratory tract, resulting in a protease:protease inhibitor imbalance in the lung.2,7 This imbalance allows relatively unopposed destruction of the connective tissue framework of the lung parenchyma.7

Augmenting the levels of functional Alpha1-proteinase inhibitor by intravenous infusion is an approach to therapy for patients with Alpha1-PI deficiency. However, the efficacy of augmentation therapy in affecting the progression of emphysema has not been demonstrated in randomized, controlled clinical trials. The intended theoretical goal is to provide protection to the lower respiratory tract by correcting the imbalance between neutrophil elastase and protease inhibitors. Whether augmentation therapy with Aralast NP actually protects the lower respiratory tract from progressive emphysematous changes has not been evaluated. Although the maintenance of blood serum levels of Alpha1-PI (antigenically measured) above 11 microM has been historically postulated to provide therapeutically relevant anti-neutrophil elastase protection, this has not been proven. Individuals with severe Alpha1-PI deficiency have been shown to have increased neutrophil and neutrophil elastase concentrations in lung epithelial lining fluid compared to normal PiMM individuals, and some PiSZ individuals with Alpha1-PI above 11 microM have emphysema attributed to Alpha1-PI deficiency. These observations underscore the uncertainty regarding the appropriate therapeutic target serum level of Alpha1-PI during augmentation therapy. The clinical benefit of increased blood levels of Alpha1-PI at the recommended dose has not been established.

The clinical efficacy of Aralast NP in influencing the course of pulmonary emphysema or the frequency, duration, or severity of pulmonary exacerbations has not been demonstrated in randomized, controlled clinical trials.

Chronic augmentation therapy with a weekly dose of Aralast NP at 60 mg/kg body weight to patients with Alpha1-PI deficiency increases the level of the deficient protein in plasma and in the epithelial lining fluid (ELF) as determined by antigenic assay. Normal individuals have plasma levels of Alpha1-PI greater than 20 microM. The clinical benefit of increased blood and ELF levels of Alpha1-PI at the recommended dose has not been demonstrated in adequately powered, randomized, double-blind, placebo-controlled trials for any Alpha1-PI product. 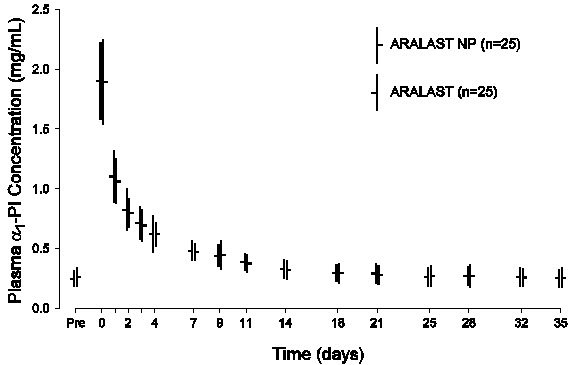 Long-term studies in animals to evaluate the carcinogenic potential of Aralast NP have not been conducted. In vitro and in vivo testing of Aralast NP for mutagenesis or impairment of fertility was not performed.

A clinical trial (ARALAST versus PROLASTIN trial) was conducted to compare the predecessor product ARALAST to a commercially available preparation of Alpha1-PI (PROLASTIN) in 28 subjects with congenital Alpha1-PI deficiency and emphysema, who had not received Alpha1-PI augmentation therapy within the preceding six months.

Subjects were randomized to receive either ARALAST or PROLASTIN, 60 mg/kg intravenously per week for 10 consecutive weeks. Following their first 10 weekly infusions, the subjects who were receiving PROLASTIN were switched to ARALAST while those who already were receiving ARALAST continued to receive it. Table 5 summarizes the mean serum antigenic and functional Alpha1-PI trough levels measured prior to infusion at steady state (Weeks 8 through 11).

Following weekly augmentation therapy with ARALAST or PROLASTIN, a gradual increase in peak and trough serum Alpha1-PI levels was noted, with stabilization after several weeks. The metabolic half-life of ARALAST was 5.9 days. Serum ANEC trough levels rose substantially in all subjects by Week 2, and by Week 3, serum ANEC trough levels exceeded 11 microM in the majority of subjects. With few exceptions, levels in both treatment groups remained above this level in individual subjects for the duration of the period Weeks 3 through 24. Although only five of fourteen subjects (35.7%) receiving ARALAST had BALs meeting acceptance criteria for analysis at both baseline and Week 7, a statistically significant increase in the antigenic level of Alpha1-PI in epithelial lining fluid (ELF) was observed. No statistically significant increase in the ANEC in the ELF was detected.

It was concluded that at a dose of 60 mg/kg administered intravenously once weekly, ARALAST and PROLASTIN had similar effects in maintaining target serum Alpha1-PI trough levels and increasing antigenic levels of Alpha1-PI in the ELF with maintenance augmentation therapy.

The pharmacokinetic comparability of Aralast NP and the predecessor product ARALAST was demonstrated in a randomized, double-blind, crossover trial in 25 subjects with severe Alpha1-PI deficiency [see Pharmacokinetics (12.3)]. 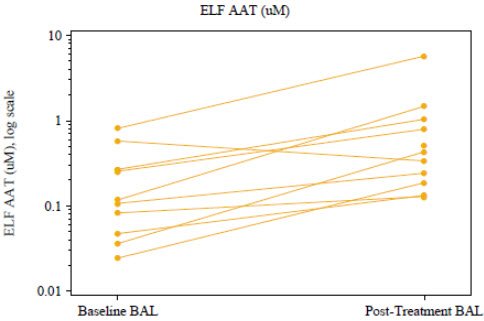 The clinical efficacy of Aralast NP or any Alpha1-PI product in influencing the clinical course of pulmonary emphysema in Alpha1-PI deficiency has not been conclusively demonstrated in adequately powered, randomized, controlled clinical trials.

Aralast NP is available in the following kits:

Aralast NP® is a trademark of Baxalta Incorporated, a wholly-owned, indirect subsidiary of Shire plc. SHIRE and the Shire Logo are trademarks or registered trademarks of Shire Pharmaceutical Holdings Ireland Limited or its affiliates.

Prolastin is a trademark of Talecris Biotherapeutics, Inc.

Lyophilized powder for solution
For intravenous use only

Aralast NP® is a trademark of Baxalta Incorporated,
a wholly-owned, indirect subsidiary of Shire plc.

Sterile Water for Injection, USP
for reconstitution of accompanying product

See accompanying directions for use. Do not use unless clear. No antimicrobial agent
or other substance has been added. Do not use for intravascular injection without
making approximately isotonic by addition of suitable solute. Discard unused portion.
Rx Only.

Lyophilized powder for solution
For intravenous use only

Aralast NP® is a trademark of Baxalta Incorporated,
a wholly-owned, indirect subsidiary of Shire plc.

Sterile Water for Injection, USP
for reconstitution of accompanying product

Do not use unless clear. No antimicrobial agent or other substance has been added.
Do not use for intravascular injection without making approximately isotonic by
addition of suitable solute. Discard unused portion.
Rx Only