Hallucinations or delusions can occur in as many as 50 percent of patients with Parkinson’s disease at some time during the course of their illness. People who experience them see or hear things that are not there (hallucinations) and/or have false beliefs (delusions). The hallucinations and delusions experienced with Parkinson’s disease are serious symptoms, and can lead to thinking and emotions that are so impaired that the people experiencing them may not relate to loved ones well or take appropriate care of themselves.

“Hallucinations and delusions can be profoundly disturbing and disabling,” said Mitchell Mathis, M.D., director of the Division of Psychiatry Products in the FDA’s Center for Drug Evaluation and Research. “Nuplazid represents an important treatment for people with Parkinson’s disease who experience these symptoms.”

An estimated 50,000 Americans are diagnosed with Parkinson’s disease each year, according to the National Institutes of Health, and about one million Americans have the condition. The neurological disorder typically occurs in people over age 60, when cells in the brain that produce a chemical called dopamine become impaired or die. Dopamine helps transmit signals between the areas of the brain that produce smooth, purposeful movement -- like eating, writing and shaving. Early symptoms of the disease are subtle and occur gradually. In some people Parkinson’s disease progresses more quickly than in others. As the disease progresses, the shaking, or tremor, which affects the majority of people with Parkinson’s disease, may begin to interfere with daily activities. Other symptoms may include depression and other emotional changes; hallucinations and delusions; difficulty in swallowing, chewing, and speaking; urinary problems or constipation; skin problems; and sleep disruptions.

The effectiveness of Nuplazid was shown in a six-week clinical trial of 199 participants. Nuplazid was shown to be superior to placebo in decreasing the frequency and/or severity of hallucinations and delusions without worsening the primary motor symptoms of Parkinson’s disease.

In clinical trials, the most common side effects reported by participants taking Nuplazid were: swelling, usually of the ankles, legs, and feet due to the accumulation of excessive fluid in the tissue (peripheral edema); nausea; and abnormal state of mind (confused state).

Nuplazid was granted breakthrough therapy designation for the treatment of hallucinations and delusions associated with Parkinson’s disease. Breakthrough therapy designation is a program designed to expedite the development and review of drugs that are intended to treat a serious condition and where preliminary clinical evidence indicates that the drug may demonstrate substantial improvement over available therapy on a clinically significant endpoint. The drug was also granted a priority review. The FDA’s priority review program provides for an expedited review of drugs that offer a significant improvement in the safety or effectiveness for the treatment, prevention, or diagnosis of a serious condition. 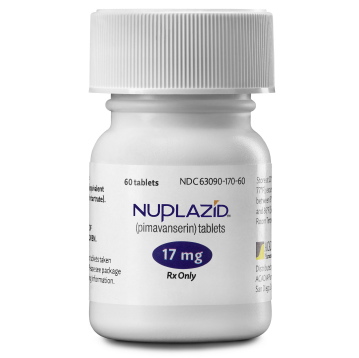