Stomach polyps — also called gastric polyps — are masses of cells that form on the lining inside your stomach. These polyps are rare and usually don't cause any signs or symptoms.

Stomach polyps are most often discovered when your doctor is examining you for some other reason.

Most stomach polyps don't become cancerous. But certain types can increase your risk of stomach cancer. Depending on the type of stomach polyp you have, treatment might involve removing the polyp or monitoring it for changes. 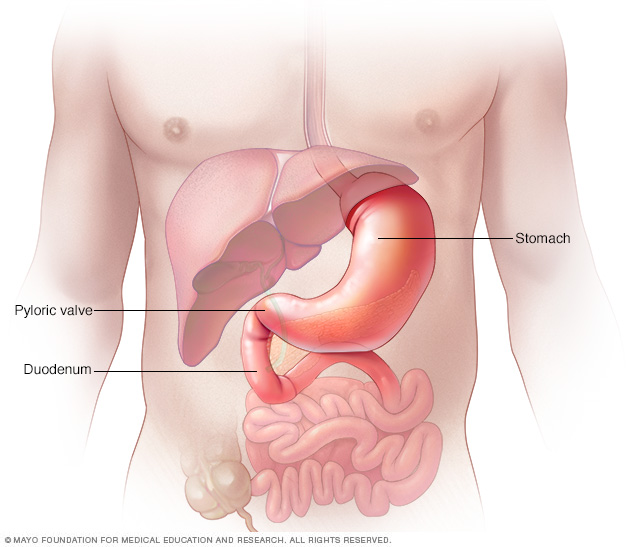 Your stomach is a muscular sac about the size of a small melon that expands when you eat or drink to hold as much as a gallon (about 4 liters) of food or liquid. Once your stomach pulverizes the food, strong muscular contractions (peristaltic waves) push the food toward the pyloric valve, which leads to the upper portion of your small intestine (duodenum).

But as a stomach polyp enlarges, open sores (ulcers) can develop on its surface. Rarely, the polyp can block the opening between your stomach and your small intestine.

Signs and symptoms include:

See your doctor if you have persistent blood in your stool or other signs or symptoms of stomach polyps.

Stomach polyps form in response to damage to your stomach lining. The most common causes of stomach polyps are:

Factors that increase your chances of developing stomach polyps include:

Tests and procedures used to diagnose stomach polyps include:

Treatment depends on the type of stomach polyps you have:

Your doctor will likely recommend follow-up endoscopy to check for recurring polyps.

If you have gastritis caused by H. pylori bacteria in your stomach, your doctor will likely recommend treatment with a combination of medications, including antibiotics. Treating an H. pylori infection can make hyperplastic polyps disappear and might also stop polyps from recurring.

You might start by seeing your primary care doctor or you might be referred to a doctor who specializes in the digestive system (gastroenterologist).

When you make the appointment, ask if there's anything you need to do in advance, such as fasting before having a specific test. Make a list of:

For stomach polyps, some questions to ask your doctor include:

Your doctor is likely to ask you questions about your symptoms, such as: