Chiari malformation (kee-AH-ree mal-for-MAY-shun) is a condition in which brain tissue extends into the spinal canal. It occurs when part of the skull is misshapen or smaller than is typical, pressing on the brain and forcing it downward.

Chiari malformation is uncommon, but increased use of imaging tests has led to more-frequent diagnoses.

Doctors categorize Chiari malformation into three types, depending on the anatomy of the brain tissue that is displaced into the spinal canal and whether developmental problems of the brain or spine are present.

Treatment of Chiari malformation depends on the form, severity and associated symptoms. Regular monitoring, medications and surgery are treatment options. In some cases, no treatment is needed. 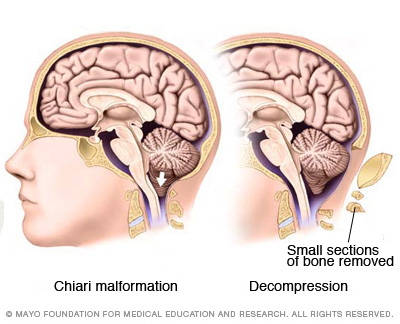 In Chiari malformation surgery, doctors remove a small section of bone at the back of your skull to make room for part of your brain (cerebellum) and relieve pressure on your brainstem, cerebellum and spinal cord.

Many people with Chiari malformation have no signs or symptoms and don't need treatment. Their condition is detected only when tests are performed for unrelated disorders. However, depending on the type and severity, Chiari malformation can cause a number of problems.

The more common types of Chiari malformation are:

Although these types are less serious than the rarer pediatric form, type 3, signs and symptoms still can be life disrupting.

The signs and symptoms can include those related to a form of spina bifida called myelomeningocele that nearly always accompanies Chiari malformation type 2. In myelomeningocele, the backbone and the spinal canal don't close properly before birth.

Signs and symptoms may include:

Chiari malformation type 2 is usually noted with ultrasound during pregnancy. It may also be diagnosed after birth or in early infancy.

In the most severe type of the condition, Chiari malformation type 3, a portion of the lower back part of the brain (cerebellum) or the brainstem extends through an opening in the back of the skull. This form of Chiari malformation is diagnosed at birth or with an ultrasound during pregnancy.

This type of Chiari malformation has a higher mortality rate and may also cause neurological problems.

If you or your child has any of the signs and symptoms that may be associated with Chiari malformation, see your doctor for an evaluation.

Because many symptoms of Chiari malformation can also be associated with other disorders, a thorough medical evaluation is important.

Chiari malformation type 1 occurs when the section of the skull containing a part of the brain (cerebellum) is too small or is deformed, thus putting pressure on and crowding the brain. The lower part of the cerebellum (tonsils) is displaced into the upper spinal canal.

When the cerebellum is pushed into the upper spinal canal, it can interfere with the normal flow of cerebrospinal fluid that protects the brain and spinal cord.

This impaired circulation of cerebrospinal fluid can lead to the blockage of signals transmitted from the brain to the body, or to a buildup of spinal fluid in the brain or spinal cord.

Alternatively, the pressure from the cerebellum on the spinal cord or lower brainstem can cause neurological signs or symptoms.

There's evidence that Chiari malformation runs in some families. However, research into a possible hereditary component is still in its early phase.

In some people, Chiari malformation can become a progressive disorder and lead to serious complications. In others, there may be no associated symptoms, and no intervention is necessary. The complications associated with this condition include:

To diagnose your condition, your doctor will review your medical history and symptoms and conduct a physical examination.

Your doctor will also order imaging tests to diagnose your condition and determine its cause. Tests may include:

Treatment for Chiari malformation depends on the severity and the characteristics of your condition.

If you have no symptoms, your doctor likely will recommend no treatment other than monitoring with regular examinations and MRIs.

When headaches or other types of pain are the primary symptom, your doctor may recommend pain medication.

Doctors usually treat symptomatic Chiari malformation with surgery. The goal is to stop the progression of changes in the anatomy of the brain and spinal canal, as well as ease or stabilize symptoms.

When successful, surgery can reduce pressure on the cerebellum and spinal cord and restore the normal flow of spinal fluid.

In the most common surgery for Chiari malformation, called posterior fossa decompression, the surgeon removes a small section of bone in the back of the skull, relieving pressure by giving the brain more room.

In many cases, the covering of the brain, called the dura mater, may be opened. Also, a patch may be sewn in place to enlarge the covering and provide more room for the brain. This patch may be an artificial material, or it could be tissue harvested from another part of the body.

The surgical technique may vary, depending on whether a fluid-filled cavity (syrinx) is present, or if you have fluid in your brain (hydrocephalus). If you have a syrinx or hydrocephalus, you may need a tube (shunt) to drain the excess fluid.

Surgery involves risks, including the possibility of infection, fluid in the brain, cerebrospinal fluid leakage or problems with wound healing. Discuss the pros and cons with your doctor when deciding whether surgery is the most appropriate treatment for you.

The surgery reduces symptoms in most people, but if nerve injury in the spinal canal has already occurred, this procedure won't reverse the damage.

After the surgery, you'll need regular follow-up examinations with your doctor, including periodic imaging tests to assess the outcome of surgery and the flow of cerebrospinal fluid.

You're likely to start by seeing your family doctor. However, when you call to set up an appointment, you may be referred to a doctor trained in brain and nervous system conditions (neurologist).

Prepare a list of questions so that you can make the most of your limited time with your doctor. List your questions from most important to least important in case time runs out. For Chiari malformation, some basic questions to ask your doctor include: