What is a Nosebleed (Epistaxis)?

The inside of the nose is covered with moist, delicate tissue (mucosa) that has a rich supply of blood vessels near the surface. When this tissue is injured, even from a minor nick or scratch, these blood vessels tend to bleed, sometimes heavily. Nosebleeds near the front of the nose, called anterior nosebleeds, are very common since this is the most accessible area to injury. The most frequent location is the nasal septum, the wall between the two sides of the nose. In most cases, this type of nosebleed is not serious. It usually can be stopped with some local pressure and a little patience.

Only rarely is a nosebleed life threatening or fatal. In these cases, the hemorrhage (severe bleeding) is usually from an artery in a posterior location, higher and deeper in the nose. Posterior bleeds usually drain down the back of the throat, but can also bleed out of both nostrils. Also, in most cases of severe nosebleeds, the person has another health problem, such as high blood pressure or a bleeding disorder, or the person takes a blood-thinning medication that slows down the blood-clotting process. 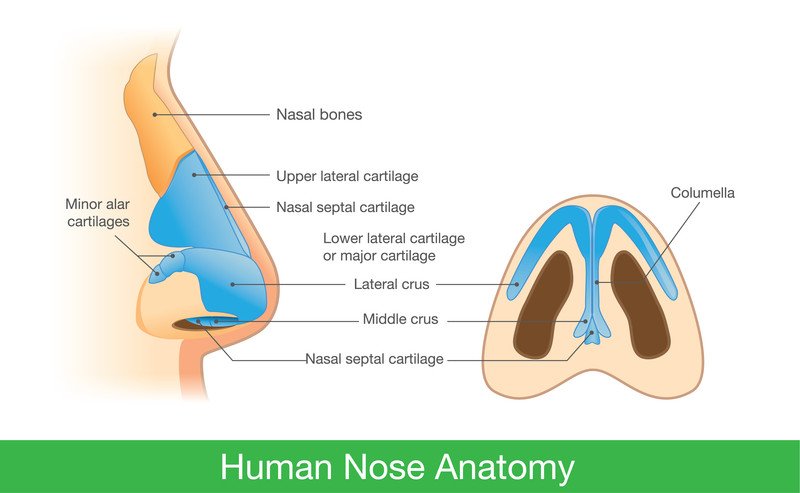 Certain people are more likely to get nosebleeds because of their environment, work history, health problems or use of medications that increase the tendency to bleed. Common risk factors for nosebleeds include:

Nosebleeds also commonly are caused by trauma, such as nose picking, forceful blowing of the nose or severe facial trauma from an automobile accident or contact sports.

Nosebleeds usually involve one nostril, but occasionally both nostrils are involved. If one nostril becomes partially blocked with a blood clot, the blood might flow out the other nostril or down the back of the throat. In a posterior nosebleed (higher up in the nose), large amounts of blood typically flow down the back of the throat. The amount of bleeding from a nosebleed can vary with posterior bleeds usually bleeding significantly more.

In otherwise healthy people, most mild anterior nosebleeds can be self-diagnosed and treated at home. If your nosebleed is severe and does not respond to first-aid measures, you will need to see a doctor immediately.

The doctor will review your health history and current medications. He or she also will ask you to estimate the amount of blood you've lost, which usually is based on how long you've been bleeding and the number of soaked towels or tissues you've used. Next, the doctor will examine your nose to determine where the bleeding is located. If necessary, he or she may insert a lighted, tube-like instrument called an endoscope into your nose to see the site of bleeding. Blood tests may be done to check for any bleeding abnormalities.

You can help to prevent nosebleeds by:

If you are bleeding from the front of your nose, begin by trying the following first-aid measures:

At the same time, use your other hand to apply an ice pack or a plastic bag of crushed ice to the bridge of your nose to slow blood flow. 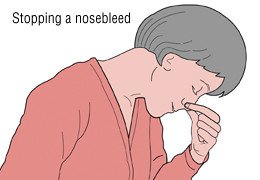 When simple first aid does not stop a nosebleed, your doctor may treat the problem by:

If you cannot stop a nosebleed by using the first-aid measures, call your doctor immediately or go to an emergency room.

Also, contact your doctor if blood continues to ooze from your nose, especially if you also have persistent nasal stuffiness or a foul-smelling nasal discharge. In older people, especially smokers, these can be symptoms of a tumor inside the nose or sinuses. In a young child, these may be signs that a foreign object is lodged in a nostril.

Some people who have excessive bleeding, multiple medical problems or who are taking anticoagulant medications may need to be hospitalized for treatment of a nosebleed.