Medically reviewed by Drugs.com. Last updated on May 2, 2022.

What is Fifth Disease (Erythema Infectiosum)?

Fifth disease, also known as erythema infectiosum, is a common viral infection among school-aged children. It is caused by parvovirus B19, which spreads through direct contact with fluids or mucus from the nose or mouth of an infected person. Fifth disease causes a bright red "slapped cheek" rash that doesn't appear until an infected person is no longer contagious. Fifth disease usually is a mild illness, and some people who are infected may never realize they have it. 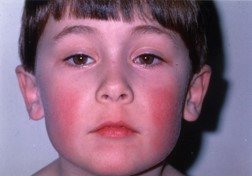 Outbreaks of fifth disease typically occur in late winter and early spring. When outbreaks occur among schoolchildren, 10% to 60% of susceptible children may develop symptoms. Parvovirus B19 infects humans only and is not the same as the parvovirus that infects dogs.

Sometimes, fifth disease does not cause any symptoms. When symptoms occur, they may include mild cold symptoms (stuffy nose, runny nose, slight fever), body aches, headache and fatigue. These symptoms pass after three or four days and are followed primarily in children by a rash that is bright red and usually begins on the cheeks (the "slapped cheek" rash). This facial rash is followed by a lacy, flat rash that appears on the arms, legs, trunk and buttocks. The blotchy rash may itch, and it may last from several days to several weeks before it fades. Even after the rash clears, it sometimes may reappear if the skin is irritated by rubbing, heat, cold, exercise or exposure to sunlight.

Adolescents and adults with fifth disease may not have any symptoms or they may develop the typical rash, joint pain and swelling (most often at the knuckles, wrists and knees) or both.

Children who have blood disorders, such as sickle cell anemia and hemolytic anemia, and those with immune deficiency or cancer rarely get the rash of fifth disease. Instead, they may develop severe anemia (not enough red blood cells) as a result of being infected with parvovirus B19. The symptoms can include paleness, rapid breathing, rapid pulse, fever and malaise (a general sick feeling).

Usually, your doctor can diagnose fifth disease by seeing the typical "slapped cheek" rash without fever or other signs of illness. Fifth disease rarely is diagnosed before the rash appears, since there may not be any early symptoms or they are mild and nonspecific. In rare cases, blood tests are done to look for specific antibodies against parvovirus B19. Antibodies are proteins made by the immune system to help protect the body against viruses or other invaders. The virus itself, or its viral DNA (genetic map), also can be detected in the blood of some patients.

Fifth disease usually goes away within three weeks, but the rash may last longer. Although joint pains in adolescents may last for a few weeks or months, there are typically no long-term joint problems.

Fifth disease is spread in the droplets of coughs and sneezes, on dirty tissues, and on drinking glasses and eating utensils. It is difficult to avoid exposure to the illness, because fifth disease is most contagious three to 14 days before its characteristic rash appears. During this time, most infected people don't know that they are ill and capable of spreading their illness to others.

When outbreaks of fifth disease occur in a community, frequent hand washing may help to prevent spread of the illness. It is especially important to wash your hands before you eat and after you have touched contaminated items (dirty tissues, drinking glasses, eating utensils). Currently there is no approved vaccine against fifth disease, although at least one vaccine is being tested.

Since fifth disease is a mild illness, it usually does not require treatment. Home care for a child whose rash itches may include oatmeal baths or other over-the-counter bath treatments. Adolescents with joint pain may be treated with over-the-counter pain relievers such as acetaminophen (Tylenol and others) or ibuprofen (Advil, Motrin and others). Aspirin should never be given to children with fever or flu-like illness, including fifth disease, because of the risk of Reye's syndrome, a serious brain problem that develops in some children who have had certain viral illnesses and have been treated with aspirin.

Children and adults with blood disorders (sickle cell anemia, hemolytic anemia), and children who have cancer or an immune deficiency, are at increased risk of serious illness as a result of fifth disease. Patients with an immune deficiency may be given intravenous immunoglobulin (IVIG) that contains antibodies against parvovirus B19.

When To Call A Professional

Pregnant women who believe they have been exposed to fifth disease or who develop a rash should call their doctors immediately. Although fifth disease in the mother usually does not threaten the unborn child, fifth disease in rare cases can cause miscarriage or fetal anemia.