What is Chickenpox (Varicella)?

Chickenpox is an infection that causes an itchy, blistering rash and is very contagious, meaning it is spread easily from one person to another. It is caused by varicella-zoster virus (VZV), which enters the body through the mouth and nose after contact with an infected person. 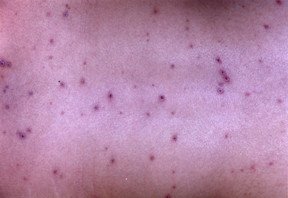 A person with chickenpox can spread the disease to someone else from one day before the rash appears until all chickenpox blisters have crusted over. Once someone has had a chickenpox infection, he or she almost always develops a lifelong immunity, meaning that person usually does not get chickenpox a second time.

Chickenpox is very contagious, and spreads easily with household or other close contact among people who are not immune. In the past, chickenpox cases often occurred in groups (epidemics), usually during the late winter and early spring. However, the number of cases of chickenpox has dropped dramatically because of the chickenpox (varicella) vaccine, which was licensed in 1995 and is recommended for all children.

Chickenpox is an uncomfortable infection that, in most cases, goes away by itself. However, chickenpox also has been associated with serious complications, including death. About one of every 100 children infected with chickenpox will develop a severe lung infection (pneumonia), an infection of the brain (encephalitis), or a problem with the liver. Dangerous skin infections also can occur.

Before the introduction of the vaccine, about 100,000 people were hospitalized and 100 people in the United States died each year of chickenpox, most of them previously healthy children. Adolescents and adults who develop chickenpox are also at high risk of developing serious complications.

After a person has chickenpox, the virus typically lives silently in the nervous system of the body for the rest of a person’s life. It may reactivate (come to life again) at any time. This is more likely to happen when the body’s immune defenses are weakened by stress or illness (such as cancer or HIV infection) or by medications that weaken the immune system. The most common reason for the virus to reactivate is getting older.

Reactivation of the virus causes a condition called herpes zoster, commonly known a shingles. It’s a painful blistering skin rash that typically occurs on the face, chest or back, in the same area where one or two of the body’s sensory nerves travel.

Symptoms of chickenpox begin between 10 and 21 days after a person is exposed. The illness typically includes fever and a generally sick feeling. This is soon followed by itchy, red bumps that quickly become fluid-filled and are easily recognized as chickenpox. The rash usually begins on the head, face and trunk and moves outward to the arms and legs.

These skin blisters are round, about 5 millimeters to 10 millimeters across (about the size of a pencil eraser), with a red base. Sometimes, they are described as a "dew drop on a rose petal." They appear in various stages over the next few days and eventually crust over. These blisters may appear anywhere there is skin, even inside the mouth, throat or vagina. Some patients have only 50 blisters or fewer. Others have too many to count.

If you or someone in your household develops a skin rash suggestive of chicken pox, call your doctor. He or she may suspect chickenpox over the phone, especially if that person has not had the chickenpox vaccine or the chickenpox disease before.

Your doctor will most likely want to examine you. Be sure to ask the doctor’s staff about where you should enter the office to avoid exposing other patients.

Your doctor will want to know whether you have been exposed to someone with chickenpox, although this is not necessary to make the diagnosis. He or she can most often make the diagnosis based on your symptoms and the typical appearance of the skin rash.

Diagnostic blood tests are also available, but they do not need to be done in most patients. Sometimes your physician may scrape a chickenpox blister to examine it under the microscope.

Chickenpox blisters form over a period of 3 to 5 days and then crust over during the next 7 to 10 days.

Chickenpox once was considered to be an unavoidable childhood illness, meaning everyone would get it. However, since the varicella vaccine was licensed, this disease can be prevented easily.

The standard recommendation is to give the first dose of varicella vaccine between age 12 and 15 months and again when the child is 3- 4 years old, but the second dose can be given as soon as three months after the first. The vaccine also is recommended when someone who has never had the disease or vaccine before has been exposed to someone with active chickenpox. This may help to prevent that person from getting the disease.

Some people are at high risk of serious complications from chickenpox, including people who have problems with their immune system, certain pregnant women, and premature infants. If a person at high risk is exposed to someone with chickenpox, an injection of varicella zoster immune globulin (VZIG) also may help to prevent chickenpox. VZIG contains protective antibodies against chickenpox that are taken from the blood of healthy people who have high levels of protection against the chickenpox virus. However, VZIG rarely is given unless a person at risk of serious complications has been exposed to someone with chickenpox for more than one hour.

Doctors can use an antiviral medication such acyclovir (Zovirax) or valacyclovir (Valtrex) to help minimize the symptoms of chickenpox in adults. It is most effective if it is started within the first 24 hours after the onset of the rash. Any parent without a personal history of chickenpox whose child develops chickenpox should call his or her own doctor right away to see whether treatment is recommended.

Otherwise healthy children who get chickenpox do not usually need antiviral medication.

Most of the treatment for chickenpox focuses on relieving the annoying itch of chickenpox blisters and preventing broken blisters from getting infected from scratching. Oatmeal baths and calamine lotion can help to reduce the itchiness. Trim fingernails to decrease the risk of infection and scarring from scratching.

If itchiness cannot be controlled with baths and lotion, oral (taken by mouth) antihistamines, such as diphenhydramine (Benadryl and other brand names), may give some relief. Use a non-aspirin medication such as acetaminophen (Tylenol and other brand names) to lower your child’s fever. Never give aspirin to a child with chickenpox because it can cause Reye’s syndrome, a potentially fatal illness. Sometimes, chickenpox blisters can become infected with bacteria and require antibiotic treatment.

The following list of medications are in some way related to or used in the treatment of this condition.

Call your doctor if any child or adult in your family develops symptoms of chickenpox, especially if:

Call your doctor for his or her recommendations if you or your child has been exposed to chickenpox and neither of you has had the disease or the vaccine before.

In people with confirmed chickenpox, call your doctor if any of the following symptoms develops:

To decrease the spread of chickenpox, the person with chickenpox should avoid exposing people who have not had the disease, especially those who cannot fight infection well.

In otherwise healthy children, chickenpox is usually a mild infection, with the skin returning to normal within two to four weeks. Sometimes, a few mild scars remain where some of the chickenpox rash had been. Scratching the blisters can result in more noticeable scars. Remember that in a very small number of cases, chickenpox causes more serious infections that require hospitalization and sometimes cause long-term disability and death.