Botulism is a form of poisoning caused by exposure to Clostridium botulinum bacteria. These bacteria manufacture a chemical poison known as botulinum toxin that interferes with muscle function in many areas of the body, causing paralysis of individual muscles or groups of muscles. Exposure to this toxin is life threatening, since one of the muscles it can paralyze is the diaphragm, the muscle that controls breathing. 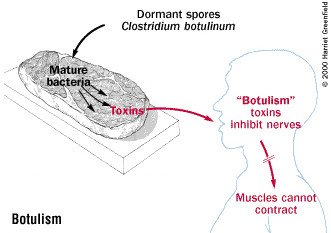 You can be exposed to the bacteria causing botulism in several ways, the most familiar being by eating contaminated food. In most food-borne cases of botulism in adults, home-canned foods are responsible. The bacteria that cause botulism exist in dirt and dust as a spore, but this form is inactive and does not produce toxin. When a spore is moved into a low-oxygen environment, however, such as an enclosed jar or can, it can reproduce and make its dangerous toxin.

Home-canned vegetables that are not highly acidic (asparagus, green beans, peppers, beets and corn) are good incubators for botulism bacteria unless they are heat-treated appropriately to kill the spores during the canning process and eaten quickly after opening. The bacteria can release large quantities of toxin into the canned food jar, causing botulism symptoms in people who sample the produce. Home-canned, smoked or fermented fish is also a risk. Recent outbreaks have been reported from commercial carrot juice and home-canned bamboo shoots. In the United States, roughly 100 people become ill with botulism each year. About a quarter are due to consumption of contaminated food. Most cases today (about 70%) occur in infants. Babies less than 1 year old, especially those that are breast feeding, have a different intestinal system than adults. Spores swallowed by an adult with a mature digestive tract usually will remain in their hibernating, inactive state. But spores ingested by a young infant can reproduce and can form toxin that is absorbed into the bloodstream, causing botulism.

In one out of five cases of botulism in infants, the infant has eaten raw honey. More rarely, botulism spores are found in corn syrup. Since the majority of cases of infant botulism can't be traced to a food source, experts suspect that babies are exposed simply by swallowing small amounts of dust or dirt.

Rarely, botulism is the result of a contaminated wound. Most wound botulism today occurs in people who inject or snort recreational drugs.

All of the symptoms of botulism are the result of nerve paralysis during exposure to the toxin. Symptoms usually begin within one to two days after eating contaminated food. Symptoms of infant botulism and wound botulism also appear suddenly.

The earliest symptoms involve the eyes and face, because nerves controlling their function are affected most quickly by the botulism toxin. Early or mild symptoms, which may go away on their own, include:

More severe cases can cause these additional symptoms:

If your doctor suspects botulism after asking you about your medical history and examining you, both blood and stool samples may be tested to check for the presence of botulinum toxin. Generally these tests are done in a government laboratory that specializes in detecting botulism. Sometimes botulism bacteria can be grown from a stool sample.

Botulism is uncommon enough that your doctor will consider other explanations for your symptoms. In most cases, several other tests will be ordered:

Once definite evidence of botulism is found with laboratory tests, usually no additional testing is needed.

Most paralysis symptoms of botulism last for several weeks and then slowly go away in the following months. Sometimes fatigue and shortness of breath can last for years.

You can prevent food-borne botulism with careful food-handling techniques:

To prevent wound botulism, do not use recreational injected drugs. Report deep wounds promptly to a physician.

Botulism usually requires hospitalization, sometimes for a prolonged time. The main treatment for botulism includes antibiotics, an antitoxin (a chemical antidote to the toxin), and good nursing support and physician care, sometimes in an intensive care unit, with machine support by a ventilator as needed to assist breathing. If antitoxin is given early in the course of the disease, it will prevent further paralysis from the toxin, but it does not affect symptoms that are already present. Physical therapy can be helpful in aiding recovery of muscle strength.

Infants with botulism present a special challenge: They are treated with antitoxin but are not given antibiotics because killing the botulism bacteria in their gut can cause a sudden release of more antitoxin. Instead, medicines that cause vomiting or treatments such as enemas are used to remove undigested food from the gut.

Wounds that are a source of botulism must be treated with surgery to remove contaminated tissue.

The following list of medications are in some way related to or used in the treatment of this condition.

Botulism can worsen rapidly and is a life-threatening emergency. If you or your infant has symptoms of botulism and these symptoms do not have a known explanation, you should contact a physician immediately.