The Vitrasert brand name has been discontinued in the U.S. If generic versions of this product have been approved by the FDA, there may be generic equivalents available.

Each Vitrasert Implant contains a ganciclovir tablet which contains the inactive ingredient, magnesium stearate (0.25%). Each tablet is coated with polyvinyl alcohol and ethylene vinyl acetate polymers.

The chemical name of ganciclovir is 9-[[2-hydroxy -1- (hydroxymethyl)ethoxy] methyl]guanine, and has the following structure: 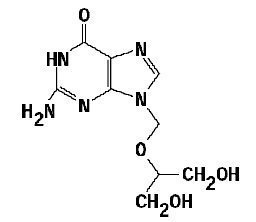 Ganciclovir is a white to off-white crystalline powder with a molecular formula of C 9 H 13 N 5 O 4 and molecular weight of 255.23. Ganciclovir has a solubility of 4.3 mg/mL in water at 25°C.

Ganciclovir is a synthetic nucleoside analogue of 2'-deoxyguanosine that inhibits replication of herpes viruses both in vitro and in vivo. Sensitive human viruses include cytomegalovirus (CMV), herpes simplex virus-1 and -2 (HSV-1, HSV-2), Epstein-Barr virus (EBV) and varicella zoster virus (VZV). Clinical studies have been limited to assessment of efficacy in patients with CMV infection.

Median effective inhibitory doses (ED 50 ) of ganciclovir for human CMV isolates tested in vitro in several cell lines ranged from 0.2 to 3.0 µg/mL. The relationship between in vitro sensitivity of CMV to ganciclovir and clinical response has not been established. Ganciclovir inhibits mammalian cell proliferation in vitro at higher concentrations (10 to 60 µg/mL) with bone marrow colony forming cells being the most sensitive (ID 50 >/=10 µg/mL) of those cell types tested.

Emergence of viral resistance has been reported based on in vitro sensitivity testing of CMV isolates from patients receiving intravenous ganciclovir treatment. The prevalence of resistant isolates is unknown, and there is a possibility that some patients may be infected with strains of CMV resistant to ganciclovir. Therefore, the possibility of viral resistance should be considered in patients who show poor clinical response.

In a clinical trial of Vitrasert Implants, 26 patients (30 eyes) received a total of 39 primary implants and 12 exchange implants (performed 32 weeks after the implant was inserted or earlier if progression of CMV retinitis occurred). Because most of the exchanged implants were empty, the time the implant actually ran out of drug was unknown, and a precise in-vivo release rate could not be calculated. However, approximate in-vivo release rates could be determined for the exchanged implants, which ranged from 1.00 µg/h to more than 1.62 µg/h.

In 14 implants (3 exchanged, 11 autopsy) in which the in-vivo release rate could accurately be calculated, the mean release rate was 1.40 µg/h, with a range from 0.5 to 2.88 µg/h. The mean vitreous drug levels in eight eyes (4 collected at the time of retinal detachment surgery; 2 collected from autopsy eyes within 6 hours of death and prior to fixation; 2 collected from implant exchanges) was 4.1 µg/mL.

The Vitrasert Implant is indicated for the treatment of CMV retinitis in patients with acquired immunodeficiency syndrome (AIDS).

The Vitrasert Implant is for intravitreal implantation only.

In a randomized, controlled parallel group trial conducted between May 1993 and December 1994, treatment with the Vitrasert Implant was compared to treatment with intravenous ganciclovir (Cytovene-IV; Roche) in 188 patients with AIDS and newly diagnosed CMV retinitis. Patients randomized to the Cytovene-IV treatment group received Cytovene-IV solution at induction doses (5 mg/kg twice daily) for 14 days, followed by maintenance dosing (5 mg/kg once daily). Based on masked assessment of fundus photographs, the median time to progression was approximately 210 days for the Vitrasert Implant treatment group compared to approximately 120 days for the intravenous ganciclovir treatment group.

As with any surgical procedure, there is risk involved. Potential complications accompanying intraocular surgery to place the Vitrasert Implant into the vitreous cavity may include, but are not limited to, the following: vitreous loss, vitreous hemorrhage, cataract formation, retinal detachment, uveitis, endophthalmitis, and decrease in visual acuity.

As with any surgical procedure, there is risk involved. Potential complications accompanying intraocular surgery to place the Vitrasert Implant into the vitreous cavity may include, but are not limited to, the following: intraocular infection or inflammation, detachment of the retina, and formation of cataract in the natural crystalline lens.

The Vitrasert Implant only treats eyes in which it has been implanted. Additionally, because CMV is a systemic disease, patients should be monitored for extraocular CMV infections (e.g., pneumonitis, colitis) in the body.

Patients should be advised that ganciclovir has caused tumors in animals. Although there is no information from human studies, ganciclovir should be considered a potential carcinogen.

Ganciclovir was carcinogenic in the mouse at oral doses of 20 and 1000 mg/kg/day. At the dose of 1000 mg/kg/day there was a significant increase in the incidence of tumors of the preputial gland in males, forestomach (nonglandular mucosa) in males and females, and reproductive tissues (ovaries, uterus, mammary gland, clitoral gland, and vagina) and liver in females. At the dose of 20 mg/kg/day, a slightly increased incidence of tumors was noted in the preputial and harderian glands in males, forestomach in males and females, and liver in females. Except for histiocytic sarcoma of the liver, ganciclovir-induced tumors were generally of epithelial or vascular origin. Although the preputial and clitoral glands, forestomach, and harderian glands of mice do not have human counterparts, ganciclovir should be considered a potential carcinogen in humans.

Ganciclovir increased mutations in mouse lymphoma cells and DNA damage in human lymphocytes in vitro at concentrations between 50-500 and 250-2000 µg/mL, respectively. In the mouse micronucleus assay, ganciclovir was clastogenic at doses of 150 and 500 mg/kg (IV) (2.8 - 10x human exposure based on AUC) but not 50 mg/kg (exposure approximately comparable to the human based on AUC). Ganciclovir was not mutagenic in the Ames Salmonella assay at concentrations of 500-5000 µg/mL.

Daily intravenous doses of 90 mg/kg administered to female mice prior to mating, during gestation, and during lactation caused hypoplasia of the testes and seminal vesicles in the month-old male offspring, as well as pathologic changes in the nonglandular region of the stomach (see Carcinogenesis, Mutagenesis subsection).

It is not known whether ganciclovir from the Vitrasert Implant is excreted in human milk. Daily intravenous doses of 90 mg/kg administered to female mice prior to mating, during gestation, and during lactation caused hypoplasia of the testes and seminal vesicles in the month-old male offspring, as well as pathologic changes in the non-glandular region of the stomach. Because many drugs are excreted in human milk and, because carcinogenicity and teratogenicity effects occurred in animals treated with ganciclovir, mothers should be instructed to discontinue nursing if they have a Vitrasert Implant.

Safety and effectiveness in pediatric patients below 9 years of age have not been established.

During clinical trials, the most frequent adverse events seen in patients treated with the Vitrasert Implant involved the eye.

The Vitrasert Implant is supplied in individual unit boxes in a sterile Tyvek package (NDC 24208-412-01).

FOR INTRAVITREAL IMPLANTATION ONLY
Rx Only

Vitrasert is a registered trademark of Bausch & Lomb Incorporated.

One Sterile Vitreal Implant
For Intraocular Implantation Only