Indications and Usage for Thrombate III

Thrombate III is a human antithrombin (AT) indicated in patients with hereditary antithrombin deficiency for:

For intravenous use after reconstitution only

Thrombate III is a sterile lyophilized powder for reconstitution in single use vials. Each vial of Thrombate III contains the labeled amount of antithrombin in units per vial, typically 500 units. When reconstituted with 10 mL of Sterile Water for Injection, USP, the final concentration is approximately 50 units per mL.

The potency is determined with a standard calibrated in International Units against a World Health Organization (WHO) antithrombin reference preparation.

Because Thrombate III is made from human blood, it may carry a risk of transmitting infectious agents, e.g., viruses, the variant Creutzfeldt-Jakob disease (vCJD) agent and, theoretically, the Creutzfeldt-Jakob disease (CJD) agent. There is also the possibility that unknown infectious agents may be present in the product. The risk that the product will transmit viruses has been reduced by screening plasma donors for prior exposure to certain viruses, by testing for the presence of certain current virus infections, and by inactivating and removing certain viruses during manufacture. Despite these measures, this product may still potentially transmit diseases.

Report all infections suspected by a physician possibly to have been transmitted by this product to Grifols Therapeutics LLC at 1-800-520-2807.

In clinical studies, the most common adverse reactions (≥ 5% of subjects) were dizziness, chest discomfort, nausea, dysgeusia, and pain (cramps).

Two clinical trials were conducted in 33 subjects with congenital AT deficiency. The first was a prospective, open-label, dose-escalation, dose-ranging, and pharmacokinetic study in 11 asymptomatic subjects. Eight subjects received a single dose, escalated sequentially, followed by weekly dose ranging from 25 to 125 unit/kg. Five subjects (including 2 from the first part of the study) received weekly Thrombate III for periods of up to 23 weeks in doses ranging from 125 to 225 unit/kg. The second trial was a phase III, prospective, open-label study conducted in 24 subjects for additional kinetics (n=3), the prevention of thrombosis (n=13) during high risk conditions (pregnancy, surgery), or the treatment of thrombosis (n=10). Loading doses targeted an AT plasma level of 120% and ranged from 33 to 150 unit/kg. Maintenance doses targeted a plasma AT range of 70% to 120%, which were 23 to 75 unit/kg.

The effect of drugs that use antithrombin to exert their anticoagulation may be altered when Thrombate III is added or withdrawn. Regularly perform coagulation tests suitable for the anticoagulant used (e.g., aPTT and anti-Factor Xa activity) and at close intervals to avoid excessive or insufficient anticoagulation. Adjust dosage of anticoagulant as necessary. Additionally, monitor the patients for the occurrence of bleeding or thrombosis.

Reproduction studies have been performed in rats and rabbits at doses up to four times the human dose and have revealed no evidence of impaired fertility or harm to the fetus due to Thrombate III.

The safety and effectiveness in the geriatric population have not been established.

Thrombate III, Antithrombin III (Human), is a sterile, non-pyrogenic concentrate of human antithrombin (AT) in lyophilized powder form for reconstitution for intravenous injection. When reconstituted with Sterile Water for Injection, USP, Thrombate III has a pH of 6.0 to 7.5 and contains 110 mEq/L to 210 mEq/L sodium, 110 mEq/L to 210 mEq/L chloride, 0.075 M to 0.125 M alanine, and not more than 0.1 unit of heparin per 1 unit of AT. Thrombate III contains no preservative.

Thrombate III is prepared from pooled units of human plasma from normal donors. The capacity of the Thrombate III manufacturing process to remove and/or inactivate enveloped and non-enveloped viruses has been validated by laboratory spiking studies on a scaled down process model using a wide range of viruses with diverse physicochemical properties. There are two dedicated virus inactivation/removal steps included in the Thrombate III manufacturing process: a heat treatment step at 60°C ± 0.5°C for not less than 10 hours for virus inactivation and a nanofiltration step for effective removal of viruses as small as 18 nm.

The Thrombate III manufacturing process was also investigated for its capacity to decrease the infectivity of an experimental agent of transmissible spongiform encephalopathy (TSE), considered as a model for the variant Creutzfeldt-Jakob disease (vCJD) and Creutzfeldt-Jakob disease (CJD) agents. An individual production step in the Thrombate III manufacturing process has been shown to decrease TSE infectivity of that experimental model agent. The TSE reduction step is the Effluent I to Effluent II + III fractionation step (6.0 log10). These studies provide reasonable assurance that low levels of vCJD/CJD agent infectivity, if present in the starting material, would be removed.

Antithrombin, an alpha2-glycoprotein of molecular weight 58,000, is normally present in human plasma at a concentration of approximately 12.5 mg/dL and is the major plasma inhibitor of thrombin. Inactivation of thrombin by AT occurs by formation of a covalent bond resulting in an inactive 1:1 stoichiometric complex between the two, involving an interaction of the active serine of thrombin and an arginine reactive site on AT. AT is also capable of inactivating other components of the coagulation cascade including factors IXa, Xa, XIa, and XIIa, as well as plasmin. The neutralization rate of serine proteases by AT proceeds slowly in the absence of heparin, but is greatly accelerated in the presence of heparin. As the therapeutic antithrombotic effect of heparin is mediated by AT, heparin in vivo is ineffective in the absence or near absence of AT.

After administration, Thrombate III temporarily replaces the missing AT in patients with hereditary antithrombin deficiency.

In a clinical trial of Thrombate III conducted in asymptomatic subjects with hereditary deficiency of AT, 8 subjects were administered a single dose of Thrombate III at doses ranging from 25 units/kg to 125 units/kg. Pharmacokinetic parameters were determined using immunologic and functional AT assays (Table 3).

In a prospective, open-label clinical trial, 21 subjects were administered Thrombate III for 16 prophylaxis events (n=13 subjects) and 10 for treatment of thrombosis (n=10 subjects) with 2 subjects receiving Thrombate III for both prophylaxis and treatment of thrombosis. None of the 13 subjects with hereditary AT deficiency and histories of thromboembolism treated prophylactically on 16 separate occasions with Thrombate III for high thrombotic risk situations (11 surgical procedures, 5 pregnancies and/or deliveries) developed a thrombotic complication. Heparin was administered in 3 of the 11 surgical procedures. Two of the pregnant subjects received LMW heparin prophylactically during the first trimester, but which was unable to maintain anti-coagulation with increasing dosages. [see Drug Interactions (7)] They experienced a thrombosis, which subsequently resolved with the addition of Thrombate III, and were therefore administered Thrombate III and LMW heparin prophylaxis weekly during the second and third trimesters, and during labor and delivery. These two subjects did not experience a new thrombosis.

Ten subjects with hereditary AT deficiency were treated with Thrombate III as well as heparin (n=9) for major thrombotic or thromboembolic complications, including 4 subjects with thrombosis during the first trimester of pregnancy. Nine subjects recovered with no additional thromboses or extension of existing thrombosis. The tenth subject died due to complications from the original pulmonary embolism with infarction which preceded treatment with Thrombate III.

Thrombate III is supplied in a kit containing one single use vial of Thrombate III lyophilized powder for reconstitution, one vial of Sterile Water for Injection, USP, one sterile double-ended transfer needle, and one sterile filter needle. The total activity of AT in International Units is stated on the label of the Thrombate III vial.

Components of the packaging do not contain natural rubber latex.

Inform patients that Thrombate III is made from human plasma and may carry a risk of transmitting infectious agents that can cause disease (e.g., viruses, the variant Creutzfeldt-Jakob disease (vCJD) agent and, theoretically, the Creutzfeldt-Jakob disease (CJD) agent). Inform patients that this risk has been reduced by screening plasma donors for prior exposure to certain infectious agents, by testing the donated plasma for markers of certain current infections, and by inactivating and/or removing pathogens during manufacturing. [see Warnings and Precautions (5.2)]

For Intravenous
Administration Only

Heat-Treated Nanofiltered
The patient and physician should discuss
the risks and benefits of this product.
No Preservative
Sterile — Nonpyrogenic
Reconstitute with 10 mL Sterile Water for
Injection, USP.
Store at temperatures not to exceed 25°C
(77°F). Do not freeze.
Dosage and Administration: Read package
insert.
Grifols Therapeutics LLC
Research Triangle Park, NC 27709 USA
U.S. License No. 1871

For Intravenous Administration Only

The patient and physician should discuss the risks and benefits of
this product.
This product when reconstituted with 10 mL Sterile Water for
Injection, USP, contains 110-210 mEq/L sodium, 110-210 mEq/L
chloride, 0.075-0.125 M alanine, and not more than
0.1 IU heparin/IU ATIII.
Administer within 3 hours after reconstitution.
Dosage and Administration: Read enclosed package insert.
Store at temperatures not to exceed 25°C (77°F). Do not
freeze.
If the shrink band is absent or shows any sign of tampering, do not
use the product and notify Grifols Therapeutics LLC immediately.
Not Returnable for Credit or Exchange

This product is prepared from large pools of human plasma which may contain infectious agents.
See package insert Warnings. 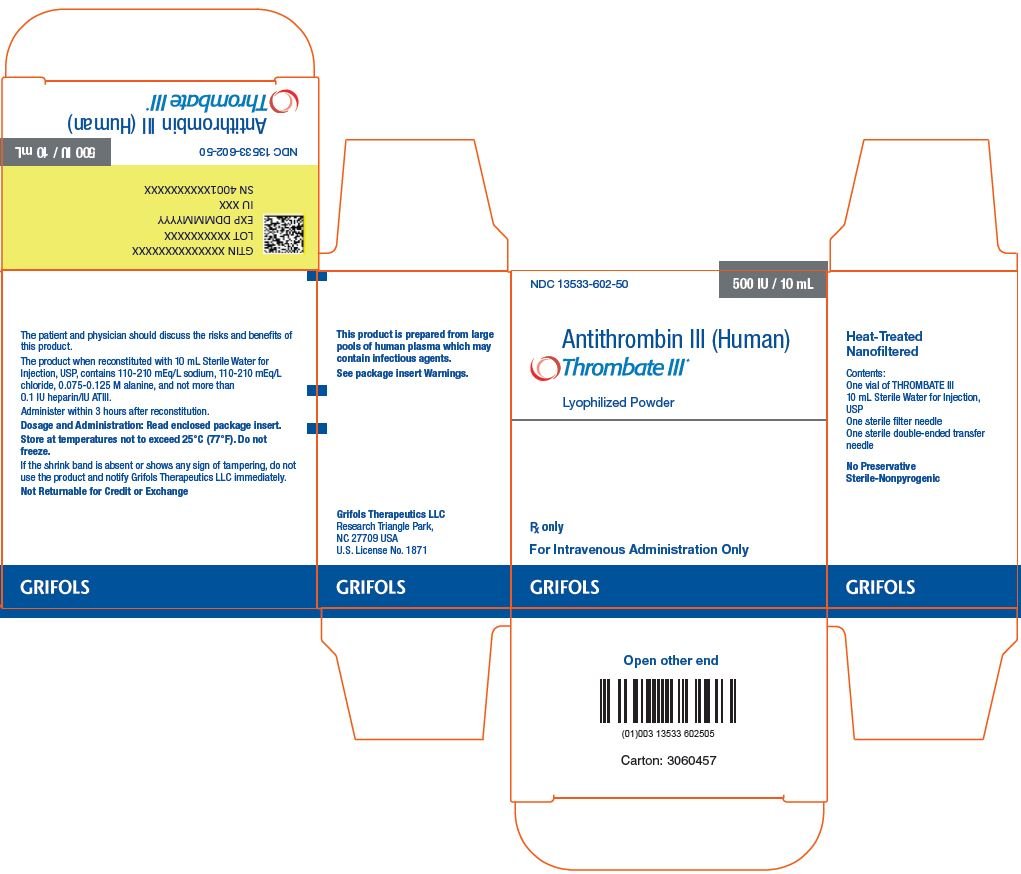 For reconstitution of accompanying product

Single-Dose Container, Nonpyrogenic
Do not use unless clear. No antimicrobial agent or other
substance has been added. Do not use for intravascular
injection without making approximately isotonic by
addition of suitable solute. Discard unused portion.

For reconstitution of accompanying product

Single-Dose Container, Nonpyrogenic
Do not use unless clear. No antimicrobial agent or other
substance has been added. Do not use for intravascular
injection without making approximately isotonic by
addition of suitable solute. Discard unused portion.