Indications and Usage for Thallous Chloride

Thallous Chloride Tl 201 Injection is a diagnostic radiopharmaceutical indicated for

Thallous Chloride Tl 201 Injection emits radiation and must be handled with appropriate safety measures and in accordance with the “as low as reasonably achievable” (ALARA) principle of radioactivity dosing.

Use the lowest dose of Thallous Chloride Tl 201 Injection necessary to obtain the intended diagnostic image. Individualize the dose and consider factors such as body size, and the equipment and technique to be employed.

For resting myocardial studies, begin imaging 10 to 20 minutes after injection of Thallous Chloride Tl 201. Myocardial-to-background ratios are improved when patients are injected upright and in the fasting state; the upright position reduces the hepatic and gastric thallium Tl-201 concentration.

For exercise stress testing administer Thallous Chloride Tl 201 Injection at the start of a period of maximum stress which is sustained for approximately 30 seconds after injection. Begin imaging within ten minutes after administration to obtain maximum target-to-background ratios. Within two hours after the completion of the stress testing the target-to-background ratios may decrease in lesions that are attributable to transient ischemia.

For localization of parathyroid hyperactivity, administer Thallous Chloride Tl 201 Injection before, with or after a minimal dose of a thyroid imaging agent such as sodium pertechnetate Tc 99m or sodium iodide I-123 to enable thyroid subtraction imaging.

The estimated absorbed radiation doses at calibration time to a 70 kg patient from an intravenous injection of Thallous Chloride Tl 201 are shown in Table 1. The estimates were calculated based on human data from Krahwinkel et al.1and Thomas et al.2Assumed percentages of 98.3% 201Tl, 0.3% 200Tl, 1.2% 202Tl, and 0.2% 203Pb. The effective dose was calculated using ICRP 103 tissue weighting factors and assumptions on the biodistribution data based on data from Krahwinkel et al. and Thomas et al.

Perform stress testing only under the supervision of a qualified physician and in a laboratory equipped with appropriate resuscitation and support equipment. Patients suspected or known to have myocardial infarction or ischemia, require continuous clinical monitoring and treatment in accordance with safe, accepted procedures.

Induction of cardiovascular stress might be associated with serious adverse events such as myocardial infarction, arrhythmia, hypotension or hypertension, ECG abnormalities, chest pain, bronchoconstriction, and cerebrovascular events. Perform pharmacologic stress when indicated and in accordance with the pharmacologic stress agent’s prescribing information.

Use the lowest dose necessary for imaging and ensure safe handling to protect the patient and health care worker [see Dosage and Administration (2.1)(2.5)].

Risk of Extravasation and Tissue Damage

The following adverse reactions have been identified during post-approval use of Thallous Chloride Tl 201. Because these reactions are reported voluntarily from a population of uncertain size, it is not always possible to reliably estimate their frequency or establish a causal relationship to drug exposure:

Injection site reactions and extravasation of Tl-201 have been reported: burning, pain, redness, swelling, warmth, and, in one case, tissue damage with chronic ulcer formation

Drugs that increase or decrease myocardial blood flow or potassium uptake might correspondingly alter the biodistribution of Thallous Chloride Tl 201.

Thallous Chloride Tl 201 is excreted in human milk. Advise patients who continue to breastfeed to express and discard milk for a minimum of 2 weeks after administration of Thallous Chloride Tl 201. Minimize close contact with infants if the administered dose would result in an effective dose greater than 1 mSv (0.1 rem) to the infant.

Safety and effectiveness of Thallous Chloride Tl 201 Injection in pediatric patients have not been established.

Assess the pregnancy status of women of childbearing potential prior to performing imaging procedures with Thallous Chloride Tl 201 Injection [see Warnings and Precautions (5.3)].

In the event of the administration of a radiation overdose with Thallous Chloride Tl 201, the absorbed dose to the patient should be reduced where possible by increasing the elimination of the radionuclide from the body by forced diuresis with frequent voiding and stimulation of the gastrointestinal passage.

Thallous Chloride Tl 201 Injection is supplied in an isotonic solution as a sterile, non-pyrogenic diagnostic radiopharmaceutical for intravenous administration. Each milliliter contains 37 MBq (1 mCi) Thallous Chloride Tl 201 at calibration time, made isotonic with 9 milligrams sodium chloride and preserved with 0.9% (v/v) benzyl alcohol. The pH is adjusted to between 4.5 to 7.0 with hydrochloric acid and/or sodium hydroxide. Thallium Tl-201 is cyclotron produced. At the time of calibration it contains no more than 1.0% thallium Tl-200, no more than 1.0% thallium Tl-202, no more than 0.25% lead Pb-203, and no less than 98% thallium Tl-201 as a percentage of total activity. No carrier has been added. 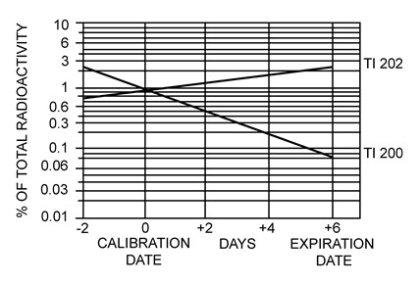 Thallium Tl-201, with a physical half-life of 72.9 hours, decays by electron capture to mercury Hg-201. Photons that are useful for detection and imaging are listed in Table 3. The lower energy x-rays obtained from the mercury Hg-201 daughter of thallium Tl-201 are recommended for myocardial imaging, because the mean percent disintegration at 68.9 to 80.3 keV is much greater than the combination of gamma-4 and gamma-6 mean percent disintegration.

The specific gamma ray constant for thallium Tl-201 is 4.64 R/mCi-hr at 1 cm. The first half-value thickness of lead (Pb) is 0.0006 cm. A range of values for the radiation emitted by this radionuclide with the corresponding exposure rate at 1 cm that results from interposition of various thicknesses of lead is shown in Table 4. For example, the use of 0.21 cm of lead will decrease the external radiation exposure by a factor of about 1,000.

To correct for physical decay of the radionuclide, the fractions that remain at selected intervals after calibration time are shown in Table 5.

In clinical studies, Thallous Chloride Tl 201 images have been found to visualize areas of infarction as “cold” or nonlabeled regions which are confirmed by electrocardiographic and enzyme changes. Regions of transient myocardial ischemia corresponding to areas perfused by coronary arteries with partial stenoses have been visualized when Thallous Chloride Tl 201 was administered in conjunction with an exercise stress test. Anatomic configurations may interfere with visualization of the right coronary artery.

After intravenous administration, Thallous Chloride Tl 201 clears rapidly from the blood with maximal concentration by normal myocardium occurring at about 10 minutes. It will, in addition, localize in parathyroid adenomas; it is not specific since it will localize to a lesser extent in sites of parathyroid hyperplasia and other abnormal tissues such as thyroid adenoma, neoplasia (e.g., parathyroid carcinoma) and sarcoid. Biodistribution is generally proportional to organ blood flow at the time of injection. Blood clearance of Thallous Chloride Tl 201 is primarily by the myocardium, thyroid, liver, kidneys and stomach with the remainder distributing fairly uniformly throughout the body. The dosimetry data in Table 1 reflect this distribution pattern and are based on a biological half-life of 2.4 days. Thallous Chloride Tl 201 is excreted slowly and to an equal extent in both feces and urine.

No long-term animal studies have been performed to evaluate carcinogenic potential, mutagenic potential or whether this drug affects fertility in males or females.

The contents of the vial are radioactive. Adequate shielding and handling precautions must be maintained.

Storage and disposal of Thallous Chloride Tl 201 Injection should be controlled in a manner that is in compliance with the appropriate regulations of the government agency authorized to license the use of this radionuclide.

Advise patients to inform their physician or healthcare provider if they are pregnant or breast-feeding.

Curium and the Curium logo are trademarks of a Curium company.
©2018 Curium US LLC. All Rights Reserved.

Each milliliter contains 37 MBq (1 mCi) Thallous Chloride TI 201 (no carrier added) at date and time of calibration. 9 mg sodium chloride, and 0.9% (v/v) benzyl alcohol as a preservative. Sodium hydroxide and/or hydrochloric acid are added for pH adjustment. The pH is between 4.5 and 7.0.

For information on dosage, administration and indications see package insert.

WARNING: Radioactive drugs must be handled only by qualified personnel in conformity with regulation of the U.S. Nuclear Regulatory Commission or state regulatory agencies where applicable. Bottle containing drug should be kept in this container or within a heavier shield.