Sodium tetradecyl sulfate is an anionic surfactant which occurs as a white, waxy solid. The structural formula is as follows: 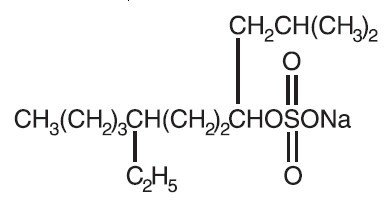 Sodium Tetradecyl Sulfate Injection is a sterile nonpyrogenic solution for intravenous use as a sclerosing agent.

Sodium Tetradecyl Sulfate Injection is a sclerosing agent. Intravenous injection causes intima inflammation and thrombus formation. This usually occludes the injected vein. Subsequent formation of fibrous tissue results in partial or complete vein obliteration that may or may not be permanent.

Sodium Tetradecyl Sulfate Injection is indicated in the treatment of small uncomplicated varicose veins of the lower extremities that show simple dilation with competent valves. The benefit- to-risk ratio should be considered in selected patients who are great surgical risks.

Sodium Tetradecyl Sulfate Injection should only be administered by a healthcare professional experienced in venous anatomy and the diagnosis and treatment of conditions affecting the venous system and familiar with proper injection technique. Severe adverse local effects, including tissue necrosis, may occur following extravasation; therefore, extreme care in intravenous needle placement and using the minimal effective volume at each injection site are important.

Emergency resuscitation equipment should be immediately available. Allergic reactions, including fatal anaphylaxis, have been reported. As a precaution against anaphylactic shock, it is recommended that 0.5 mL of Sodium Tetradecyl Sulfate Injection be injected into a varicosity, followed by observation of the patient for several hours before administration of a second or larger dose. The possibility of an anaphylactic reaction should be kept in mind, and the physician should be prepared to treat it appropriately.

Because of the danger of thrombosis extension into the deep venous system, thorough preinjection evaluation for valvular competency should be carried out and slow injections with a small amount (not over 2 mL) of the preparation should be injected into the varicosity. Deep venous patency must be determined by noninvasive testing such as duplex ultrasound. Venous sclerotherapy should not be undertaken if tests such as Trendelenberg and Perthes, and angiography show significant valvular or deep venous incompetence.

Stroke, transient ischemic attack, myocardial infarction, and impaired cardiac function have been reported in close temporal relationship with STS administration. These events may be caused by air embolism when using the product foamed with room air (high nitrogen concentration) or thromboembolism. The safety and efficacy of STS foamed with room air has not been established and its use should be avoided.

Extreme caution must be exercised in the presence of underlying arterial disease such as marked peripheral arteriosclerosis or thromboangiitis obliterans (Buerger’s Disease).

No well-controlled studies have been performed on patients taking antiovulatory agents. The physician must use judgment and evaluate any patient taking antiovulatory drugs prior to initiating treatment with Sodium Tetradecyl Sulfate Injection. (See ADVERSE REACTIONS section.)

Heparin should not be included in the same syringe as Sodium Tetradecyl Sulfate Injection, since the two are incompatible.

Local reactions consisting of pain, urticaria or ulceration may occur at the site of injection. A permanent discoloration may remain along the path of the sclerosed vein segment. Sloughing and necrosis of

Parenteral drug products should be inspected visually for particulate matter and discoloration prior to administration. Do not use if precipitated or discolored.

Sodium Tetradecyl Sulfate Injection is for intravenous use only. The strength of solution required depends on the size and degree of varicosity. In general, the 1% solution will be found most useful with the 3% solution preferred for larger varicosities. The dosage should be kept small, using 0.5 mL to 2 mL (preferably 1 mL maximum) for each injection, and the maximum single treatment should not exceed 10 mL.

The intravenous LD 50 of sodium tetradecyl sulfate in mice was reported to be 90 ± 5 mg/kg.

In the rat, the acute intravenous LD 50 of sodium tetradecyl sulfate was estimated to be between 72 mg/kg and 108 mg/kg.

Purified sodium tetradecyl sulfate was found to have an LD 50 of 2 g/kg when administered orally by stomach tube as a 25% aqueous solution to rats. In rats given 0.15 g/kg in drinking water for 30 days, no appreciable toxicity was seen, although some growth inhibition was discernible.

FOR IV USE ONLY

DO NOT USE IF