This warning does not apply to Rh(D)-negative patients treated for the suppression of Rh isoimmunization.

Indications and Usage for Rhophylac

Rhophylac is a Rh(D) Immune Globulin Intravenous (Human) (anti-D) product that is indicated for the suppression of Rh isoimmunization in non-sensitized Rh(D)-negative patients and for the treatment of immune thrombocytopenic purpura (ITP) in Rh(D)-positive patients.

Observe patients for at least 20 minutes following administration of Rhophylac.

DO NOT confuse micrograms (mcg) with International Units (IU) when calculating the dose of Rhophylac. Miscalculations could result in a significant overdose or underdose of the product. Note that 1 mcg = 5 IU of Rhophylac.

For treatment of ITP, ADMINISTER Rhophylac BY THE INTRAVENOUS ROUTE ONLY [see Dosage and Administration (2.1)]. Do not administer intramuscularly.

Calculate the dose of Rhophylac for ITP on the basis of the patient's weight in kilograms (kg). Inappropriate use of pounds (lbs) will result in an overdose.

The following formula can be used to calculate the number of syringes of Rhophylac to administer:

Rhophylac is contraindicated in:

Rhophylac contains trace amounts of IgA (less than 5 mcg/mL) [see Description (11)]. Patients with known antibodies to IgA have a risk of developing potentially severe hypersensitivity and anaphylactic reactions. Rhophylac is contraindicated in patients with antibodies against IgA and a history of hypersensitivity reactions to Rhophylac or any of its components [see Contraindications (4)].

Rhophylac can contain antibodies to other Rh antigens (e.g., anti-C antibodies), which might be detected by sensitive serological tests following administration.

Because Rhophylac is made from human blood, it may carry a risk of transmitting infectious agents, e.g., viruses and, theoretically, the Creutzfeldt-Jakob disease (CJD) agent. The risk of infectious agent transmission has been reduced by screening plasma donors for prior exposure to certain viruses, testing for the presence of certain current virus infections, and including virus inactivation/removal steps in the manufacturing process for Rhophylac.

Report any infections thought to be possibly transmitted by Rhophylac to CSL Behring Pharmacovigilance at 1-866-915-6958.

Serious intravascular hemolysis has occurred in a clinical study with Rhophylac. All cases resolved completely. However, as reported in the literature, some Rh(D)-positive patients treated with Rh(D) Immune Globulin Intravenous (Human) for ITP developed clinically compromising anemia, acute renal insufficiency, and, very rarely, disseminated intravascular coagulation (DIC) and death.2 Note: This warning does not apply to Rh(D)-negative patients treated for the suppression of Rh isoimmunization.

If signs and/or symptoms of intravascular hemolysis are present or suspected after Rhophylac administration, perform post-treatment laboratory tests, including plasma hemoglobin, haptoglobin, LDH, and plasma bilirubin (direct and indirect). DIC may be difficult to detect in the ITP population; the diagnosis is dependent mainly on laboratory testing.

If patients who develop hemolysis with clinically compromising anemia after receiving Rhophylac are to be transfused, Rh(D)-negative packed RBCs should be used to avoid exacerbating ongoing hemolysis.

The safety of Rhophylac in the treatment of ITP has not been established in patients with pre-existing anemia. Rhophylac may increase the severity of anemia.

The most serious adverse reactions in patients receiving Rh(D) Immune Globulin Intravenous (Human) have been observed in the treatment of ITP and include intravascular hemolysis, clinically compromising anemia, acute renal insufficiency, and, very rarely, DIC and death [see Boxed Warning, and Warnings and Precautions (5.4)].2

The most common adverse reactions observed with the use of Rhophylac for suppression of Rh isoimmunization (≥0.5% of subjects) are nausea, dizziness, headache, injection-site pain, and malaise.

The most common adverse reactions observed in the treatment of ITP (>14% of subjects) are chills, pyrexia/increased body temperature, and headache. Hemolysis (manifested by an increase in bilirubin, a decrease in hemoglobin, or a decrease in haptoglobin) was also observed.

Because clinical studies are conducted under different protocols and widely varying conditions, adverse reaction rates observed cannot be directly compared to rates in other clinical trials and may not reflect the rates observed in practice.

In a clinical study, 98 Rh(D)-positive adult subjects with chronic ITP received an intravenous dose of Rhophylac 250 IU (50 mcg) per kg body weight [see Clinical Studies (14.2)]. Premedication to alleviate infusion-related side effects was not used except in a single subject who received acetaminophen and diphenhydramine.

Table 4 shows the most common adverse reactions observed in the clinical study.

Serious adverse reactions (SARs) were reported in 4 (4.1%) subjects. SARs were intravascular hemolytic reaction (hypotension, nausea, chills and headache, and a decrease in haptoglobin and hemoglobin) in two subjects; headache, dizziness, nausea, pallor, shivering, and weakness requiring hospitalization in one subject; and an increase in blood pressure and severe headache in one subject. All four subjects recovered completely.

Because postmarketing adverse reactions are reported voluntarily from a population of uncertain size, it is not always possible to reliably estimate their frequency or establish a causal relationship to product exposure. The following adverse reactions have been identified during post-approval use of Rhophylac:

There have been reports of lack of effect in patients with a body mass index ≥30 when administration via the intramuscular route was attempted [see Dosing and Administration (2.2)].

Transient hemoglobinuria has been reported in a patient being treated with Rhophylac for ITP.

Passive transfer of antibodies may transiently impair the immune response to live attenuated virus vaccines such as measles, mumps, rubella, and varicella [see Patient Counseling Information (17)]. Do not immunize with live vaccines within 3 months after the final dose of Rhophylac. If Rhophylac is administered within 14 days after administration of a live vaccine, the immune response to the vaccination may be inhibited.3

Animal reproduction studies have not been conducted with Rhophylac.

Rhophylac has not been evaluated in pregnant women with ITP.

In the U.S. general population, the estimated background risk of major birth defects and miscarriage in clinically recognized pregnancies is 2-4% and 15-20%, respectively.

There is no information regarding the presence of Rhophylac in human milk, the effect on the breastfed infant, and the effects on milk production. The development and health benefits of breastfeeding should be considered along with the mother's clinical need for Rhophylac and any potential adverse effects on the breastfed child from Rhophylac or from the underlying maternal condition.

Rhophylac is used in nursing mothers for the suppression of Rh isoimmunization.

Rhophylac has not been evaluated in nursing mothers with ITP.

The safety and effectiveness of Rhophylac have not been established in pediatric subjects being treated for an incompatible transfusion. The physician should weigh the potential risks against the benefits of Rhophylac, particularly in girls whose later pregnancies may be affected if Rh isoimmunization occurs.

The safety and effectiveness of Rhophylac have not been established in pediatric subjects with chronic ITP. Dosing in the treatment of children with chronic ITP is expected to be similar to adults.

Rhophylac has not been evaluated for treating incompatible transfusions in subjects 65 years of age and older.

Of the 98 subjects evaluated in the clinical study of Rhophylac for treatment of ITP [see Clinical Studies (14.2)], 19% were 65 years of age and older. No overall differences in effectiveness or safety were observed between these subjects and younger subjects.

During clinical trials, there were no reports of known overdoses in patients being treated for suppression of Rh isoimmunization or ITP. In postmarketing reporting, there have been a limited number of overdose reports including medication error reports related to dosage calculations in which higher doses than that recommended for Rhophylac were administered potentially due to confusion between mcg and international units (IU). In these reports there were no adverse reactions identified due to overdose. Patients with incompatible transfusion or ITP who receive an overdose of Rh(D) immune globulin should be monitored because of the potential risk for hemolysis.

Rhophylac is a sterile Rh(D) Immune Globulin Intravenous (Human) (anti-D) solution in a ready-to-use prefilled glass syringe for intravenous or intramuscular injection. One syringe contains at least 1500 IU (300 mcg) of IgG antibodies to Rh(D) in a 2 mL solution, sufficient to suppress the immune response to at least 15 mL of Rh(D)-positive RBCs.1 The product potency is expressed in IUs by comparison to the World Health Organization (WHO) standard, which is also the US and the European Pharmacopoeia standard.

Plasma is obtained from healthy Rh(D)-negative donors who have been immunized with Rh(D)-positive RBCs. The donors are screened carefully to reduce the risk of receiving donations containing blood-borne pathogens. Each plasma donation used in the manufacture of Rhophylac is tested for the presence of HBV surface antigen (HBsAg), HIV-1/2, and HCV antibodies. In addition, plasma used in the manufacture of Rhophylac is tested by FDA-licensed Nucleic Acid Testing (NAT) for HBV, HCV, and HIV-1 and found to be negative. The source plasma is also tested by NAT for hepatitis A virus (HAV) and B19 virus (B19V).

Rhophylac is produced by an ion-exchange chromatography isolation procedure5, using pooled plasma obtained by plasmapheresis of immunized Rh(D)-negative US donors. The manufacturing process includes a solvent/detergent treatment step (using tri-n-butyl phosphate and Triton™ X-100) that is effective in inactivating enveloped viruses such as HIV, HCV, and HBV.6,7 Rhophylac is filtered using a Planova® 15 nanometer (nm) virus filter that has been validated to be effective in removing both enveloped and non-enveloped viruses. Table 5 presents viral clearance and inactivation data from validation studies, expressed as the mean log10 reduction factor (LRF).

The mechanism by which Rh(D) immune globulin suppresses immunization to Rh(D)-positive RBCs is not completely known.

Rhophylac has been shown to increase platelet counts and to reduce bleeding in non-splenectomized Rh(D)-positive subjects with chronic ITP. The mechanism of action is thought to involve the formation of Rh(D) immune globulin RBC complexes, which are preferentially removed by the reticuloendothelial system, particularly the spleen. This results in Fc receptor blockade, thus sparing antibody-coated platelets.8

In a clinical study comparing the pharmacokinetics of intravenous versus intramuscular administration, 15 Rh(D)-negative pregnant women received a single 1500 IU (300 mcg) dose of Rhophylac at Week 28 of gestation.9

Following intramuscular administration, peak serum levels ranged from 7 to 46 ng/mL and were achieved between 2 and 7 days. Mean apparent clearance was 0.29 ± 0.12 mL/min, and half-life was 18 ± 5 days. The absolute bioavailability of Rhophylac was 69%.

Regardless of the route of administration, Rh(D) immune globulin titers were detected in all women up to at least 9 weeks following administration of Rhophylac.

Pharmacokinetic studies with Rhophylac were not performed in Rh(D)-positive subjects with ITP. Rh(D) immune globulin binds rapidly to Rh(D)-positive erythrocytes.10

In an open-label, single-arm, multicenter study, 98 Rh(D)-positive adult subjects with chronic ITP and a platelet count of 30 × 109/L or less were treated with Rhophylac. Subjects received a single intravenous dose of 250 IU (50 mcg) per kg body weight.

The primary efficacy endpoint was the response rate defined as achieving a platelet count of ≥30 × 109/L as well as an increase of >20 × 109/L within 15 days after treatment with Rhophylac. Secondary efficacy endpoints included the response rate defined as an increase in platelet counts to ≥50 × 109/L within 15 days after treatment and, in subjects who had bleeding at baseline, the regression of hemorrhage defined as any decrease from baseline in the severity of overall bleeding status.

Table 7 presents the response rates by baseline platelet count for subjects in the ITT population.

Approximately half of the 98 subjects in the ITT population had evidence of bleeding at baseline. Post-baseline, the percentage of subjects without bleeding increased to a maximum of 70.4% at Day 8.

Each product presentation includes a package insert and the following components:

Please inform patients of the following:

Manufactured by:
CSL Behring AG
Bern, Switzerland
US License No. 1766

For Intravenous or Intramuscular Injection. Rx only 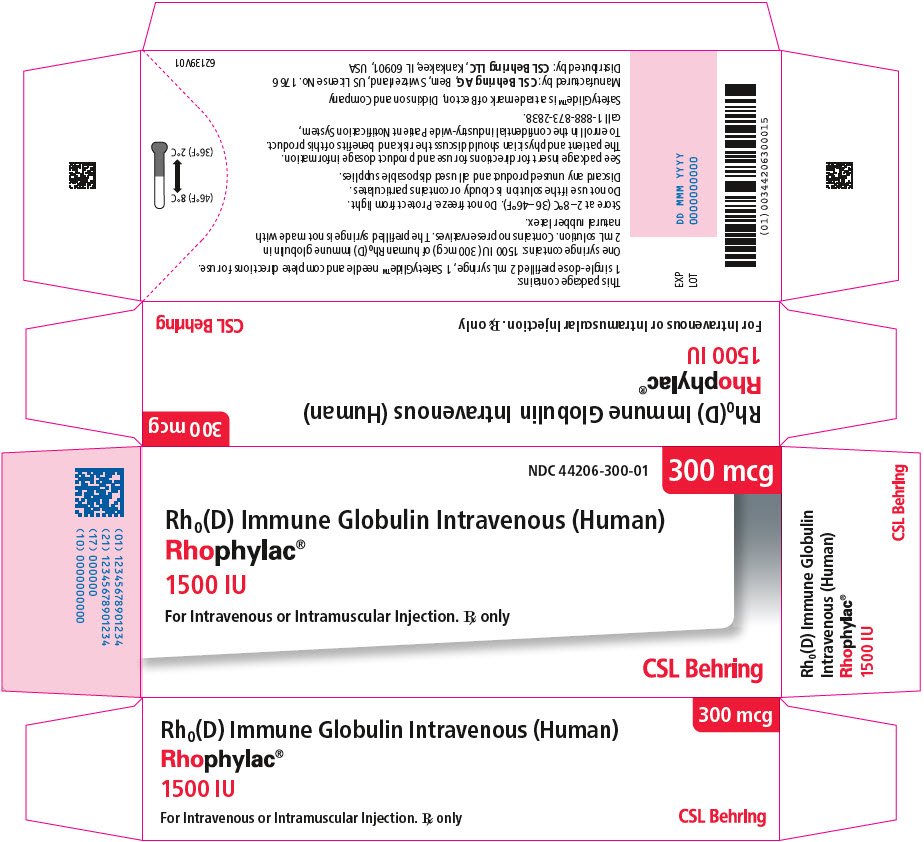 For Intravenous or Intramuscular Injection.