Fomepizole Injection is a competitive inhibitor of alcohol dehydrogenase. The chemical name of Fomepizole is 4-methylpyrazole. It has the molecular formula C4H6N2 and a molecular weight of 82.1. The structural formula is: 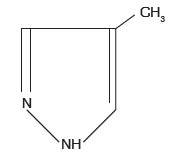 Ethylene glycol, the main component of most antifreezes and coolants, is metabolized to glycoaldehyde, which undergoes subsequent sequential oxidations to yield glycolate, glyoxylate, and oxalate. Glycolate and oxalate are the metabolic byproducts primarily responsible for the metabolic acidosis and renal damage seen in ethylene glycol toxicosis. The lethal dose of ethylene glycol in humans is approximately 1.4mL/kg.

Methanol, the main component of windshield wiper fluid, is slowly metabolized via alcohol dehydrogenase to formaldehyde with subsequent oxidation via formaldehyde dehydrogenase to yield formic acid. Formic acid is primarily responsible for the metabolic acidosis and visual disturbances (e.g., decreased visual acuity and potential blindness) associated with methanol poisoning. A lethal dose of methanol in humans is approximately 1 to 2mL/kg.

In healthy volunteers, oral doses of Fomepizole (10 to 20 mg/kg) significantly reduced the rate of elimination of moderate doses of ethanol, which is also metabolized through the action of alcohol dehydrogenase (see PRECAUTIONS, Drug Interactions).

The plasma half-life of Fomepizole varies with dose, even in patients with normal renal function, and has not been calculated.

After intravenous infusion, Fomepizole rapidly distributes to total body water. The volume of distribution is between 0.6 L/kg and 1.02L/kg.

The elimination of Fomepizole is best characterized by Michaelis-Menten kinetics after acute doses, with saturable elimination occurring at therapeutic blood concentrations [100 to 300 µmol/L, 8.2 to 24.6mg/L].

With multiple doses, Fomepizole rapidly induces its own metabolism via the cytochrome P450 mixed-function oxidase system, which produces a significant increase in the elimination rate after about 30 to 40 hours. After enzyme induction, elimination follows first-order kinetics.

Fomepizole Injection has not been studied sufficiently to determine whether the pharmacokinetics differ for a geriatric population.

Fomepizole has not been studied sufficiently to determine whether the pharmacokinetics differ for a pediatric population.

Fomepizole has not been studied sufficiently to determine whether the pharmacokinetics differ between the genders.

The metabolites of Fomepizole are excreted renally. Definitive pharmacokinetic studies have not been done to assess pharmacokinetics in patients with renal impairment.

Fomepizole is metabolized through the liver, but no definitive pharmacokinetic studies have been done in subjects with hepatic disease.

The efficacy of Fomepizole in the treatment of ethylene glycol and methanol intoxication was studied in two prospective, U.S. clinical trials without concomitant control groups. Fourteen of 16 patients in the ethylene glycol trial and 7 of 11 patients in the methanol trial underwent hemodialysis because of severe intoxication (see DOSAGE AND ADMINISTRATION). All patients received Fomepizole shortly after admission.

In a separate French trial, 5 patients presented with ethylene glycol concentrations ranging from 46.5 to 345mg/dL, insignificant ethanol blood concentrations, and normal renal function. These patients were treated with Fomepizole alone without hemodialysis, and none developed signs of renal injury.

Fomepizole should not be administered to patients with a documented serious hypersensitivity reaction to Fomepizole or other pyrazoles.

Fomepizole should not be given undiluted or by bolus injection. Venous irritation and phlebosclerosis were noted in two of six normal volunteers given bolus injections (over 5 minutes) of Fomepizole at a concentration of 25 mg/mL.

In addition to specific antidote treatment with Fomepizole, patients intoxicated with ethylene glycol or methanol must be managed for metabolic acidosis, acute renal failure (ethylene glycol), adult respiratory distress syndrome, visual disturbances (methanol), and hypocalcemia. Fluid therapy and sodium bicarbonate administration are potential supportive therapies. In addition, potassium and calcium supplementation and oxygen administration are usually necessary. Hemodialysis is necessary in the anuric patient, or in patients with severe metabolic acidosis or azotemia (see DOSAGE AND ADMINISTRATION). Treatment success should be assessed by frequent measurements of blood gases, pH, electrolytes, BUN, creatinine, and urinalysis, in addition to other laboratory tests as indicated by individual patient conditions. At frequent intervals throughout the treatment, patients poisoned with ethylene glycol should be monitored for ethylene glycol concentrations in serum and urine, and the presence of urinary oxalate crystals. Similarly, serum methanol concentrations should be monitored in patients poisoned with methanol.

Electrocardiography should be performed because acidosis and electrolyte imbalances can affect the cardiovascular system. In the comatose patient, electroencephalography may also be required. In addition, hepatic enzymes and white blood cell counts should be monitored during treatment, as transient increases in serum transaminase concentrations and eosinophilia have been noted with repeated Fomepizole dosing.

Reciprocal interactions may occur with concomitant use of Fomepizole and drugs that increase or inhibit the cytochrome P450 system (e.g., phenytoin, carbamazepine, cimetidine, ketoconazole), though this has not been studied.

Carcinogenesis, Mutagenesis, and Impairment Of Fertility :

There have been no long-term studies performed in animals to evaluate carcinogenic potential.

There was a positive Ames test result in the Escherichia coli tester strain WP2uvrA and the Salmonella typhimurium tester strain TA102 in the absence of metabolic activation. There was no evidence of a clastogenic effect in the in vivo mouse micronucleus assay.

Safety and effectiveness in geriatric patients have not been established.

The most frequent adverse events reported as drug-related or unknown relationship to study drug in the 78 patients and 63 normal volunteers who received Fomepizole injection were headache ( 14% ), nausea (11%), and dizziness, increased drowsiness, and bad taste / metallic taste (6% each). All other adverse events in this population were reported in approximately 3% or fewer of those receiving Fomepizole and were as follows:

Body as a Whole :

Nausea, dizziness, and vertigo were noted in healthy volunteers receiving 50 and 100 mg/kg doses of Fomepizole (at plasma concentrations of 290 to 520 µmol/L, 23.8 to 42.6 mg/L). These doses are 3 to 6 times the recommended dose. This dose-dependent CNS effect was short-lived in most subjects and lasted up to 30 hours in one subject.

Fomepizole is dialyzable, and hemodialysis may be useful in treating cases of overdosage.

Treatment Guidelines: If ethylene glycol or methanol poisoning is left untreated, the natural progression of the poisoning leads to accumulation of toxic metabolites, including glycolic and oxalic acids (ethylene glycol intoxication) and formic acid (methanol intoxication). These metabolites can induce metabolic acidosis, nausea/vomiting, seizures, stupor, coma, calcium oxaluria, acute tubular necrosis, blindness, and death. The diagnosis of these poisonings may be difficult because ethylene glycol and methanol concentrations diminish in the blood as they are metabolized to their respective metabolites. Hence, both ethylene glycol and methanol concentrations and acid base balance, as determined by serum electrolyte (anion gap) and/or arterial blood gas analysis, should be frequently monitored and used to guide treatment.

Treatment consists of blocking the formation of toxic metabolites using inhibitors of alcohol dehydrogenase, such as Fomepizole, and correction of metabolic abnormalities. In patients with high ethylene glycol or methanol concentrations (≥ 50 mg/dL), significant metabolic acidosis, or renal failure, hemodialysis should be considered to remove ethylene glycol or methanol and the respective toxic metabolites of these alcohols.

Treatment with Fomepizole may be discontinued when ethylene glycol or methanol concentrations are undetectable or have been reduced below 20 mg/dL, and the patient is asymptomatic with normal pH.

A loading dose of 15 mg/kg should be administered, followed by doses of 10 mg/kg every 12 hours for 4 doses, then 15 mg/kg every 12 hours thereafter until ethylene glycol or methanol concentrations are undetectable or have been reduced below 20 mg/dL, and the patient is asymptomatic with normal pH. All doses should be administered as a slow intravenous infusion over 30 minutes

Fomepizole Injection is dialyzable and the frequency of dosing should be increased to every 4 hours during hemodialysis.

Fomepizole solidifies at temperatures less than 25°C (77°F). If the Fomepizole solution has become solid in the vial, the solution should be liquefied by running the vial under warm water or by holding in the hand. Solidification does not affect the efficacy, safety, or stability of Fomepizole. Using sterile technique, the appropriate dose of Fomepizole should be drawn from the vial with a non-polycarbonate containing syringe and injected into at least 100 mL of sterile 0.9% sodium chloride injection or dextrose 5% injection. Mix well. The entire contents of the resulting solution should be infused over 30 minutes. Fomepizole, like all parenteral products, should be inspected visually for particulate matter prior to administration.

Fomepizole diluted in 0.9% sodium chloride injection or dextrose 5% injection remains stable and sterile for at least 24 hours when stored refrigerated or at room temperature. Fomepizole does not contain preservatives. Therefore, maintain sterile conditions, and after dilution do not use beyond 24 hours. Solutions showing haziness, particulate matter, precipitate, discoloration, or leakage should not be used.

How is Fomepizole Supplied

Fomepizole Injection is available as a sterile, preservative-free solution for intravenous use, in vials containing1.5mL (1 g/mL) of Fomepizole. 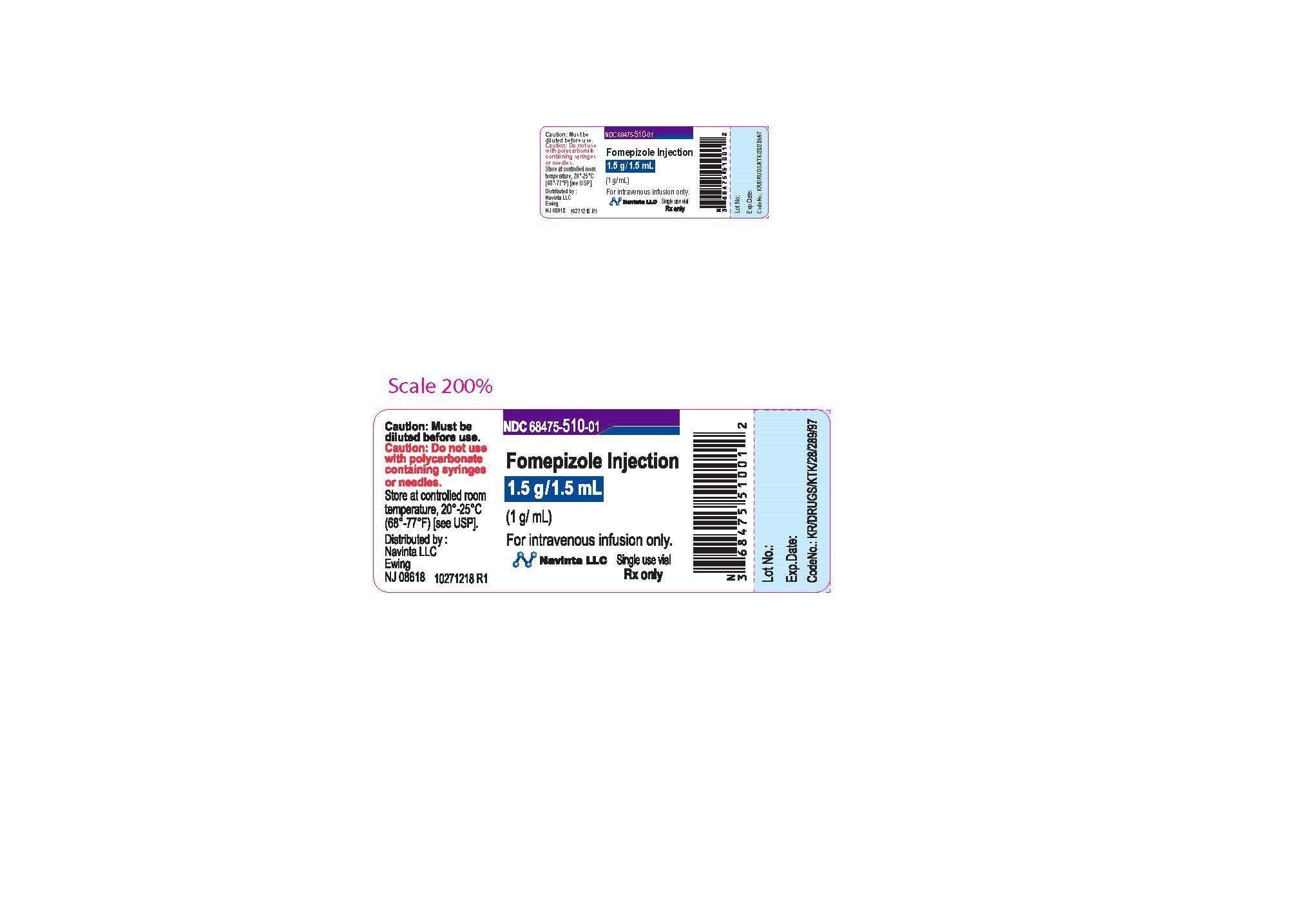 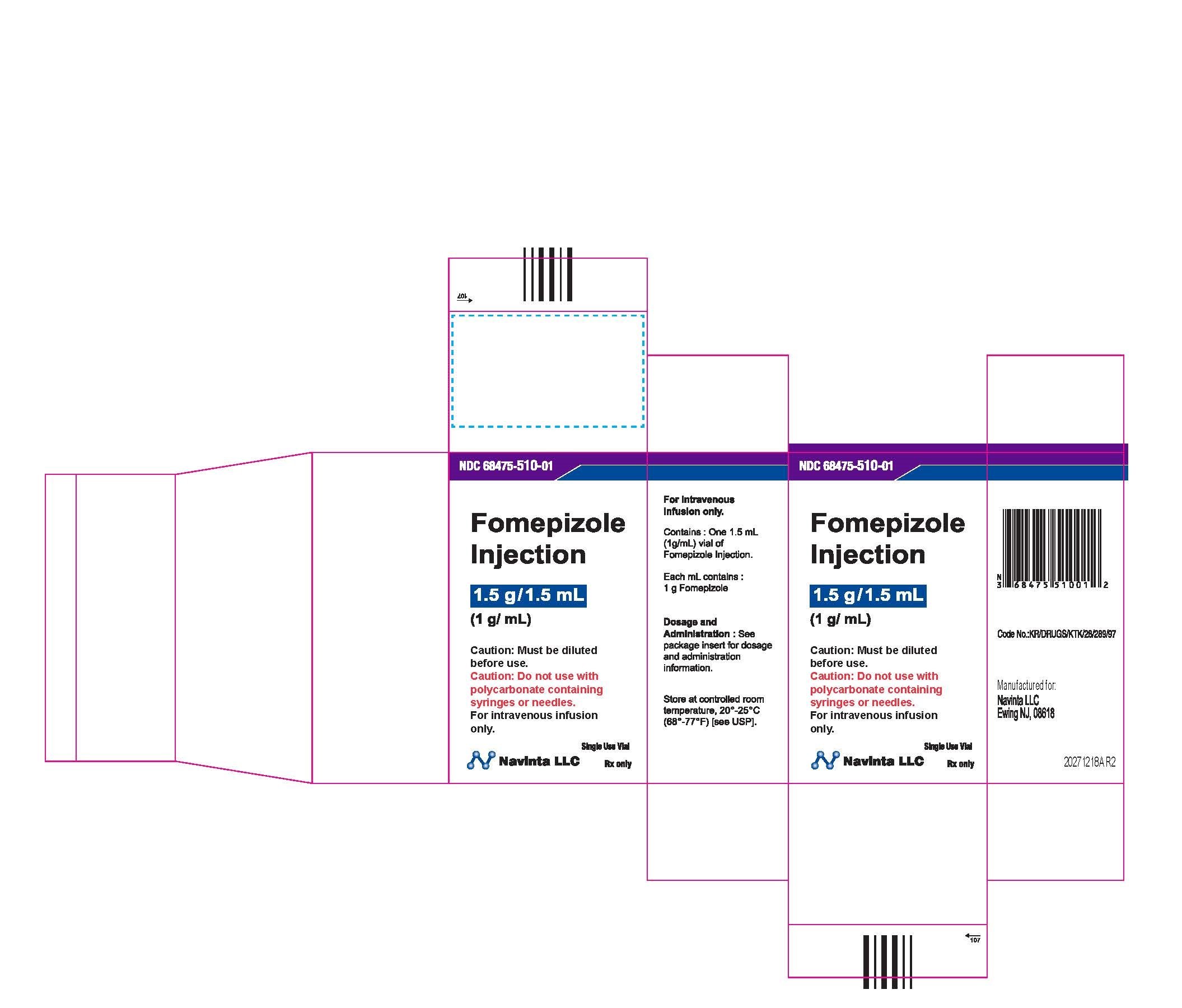 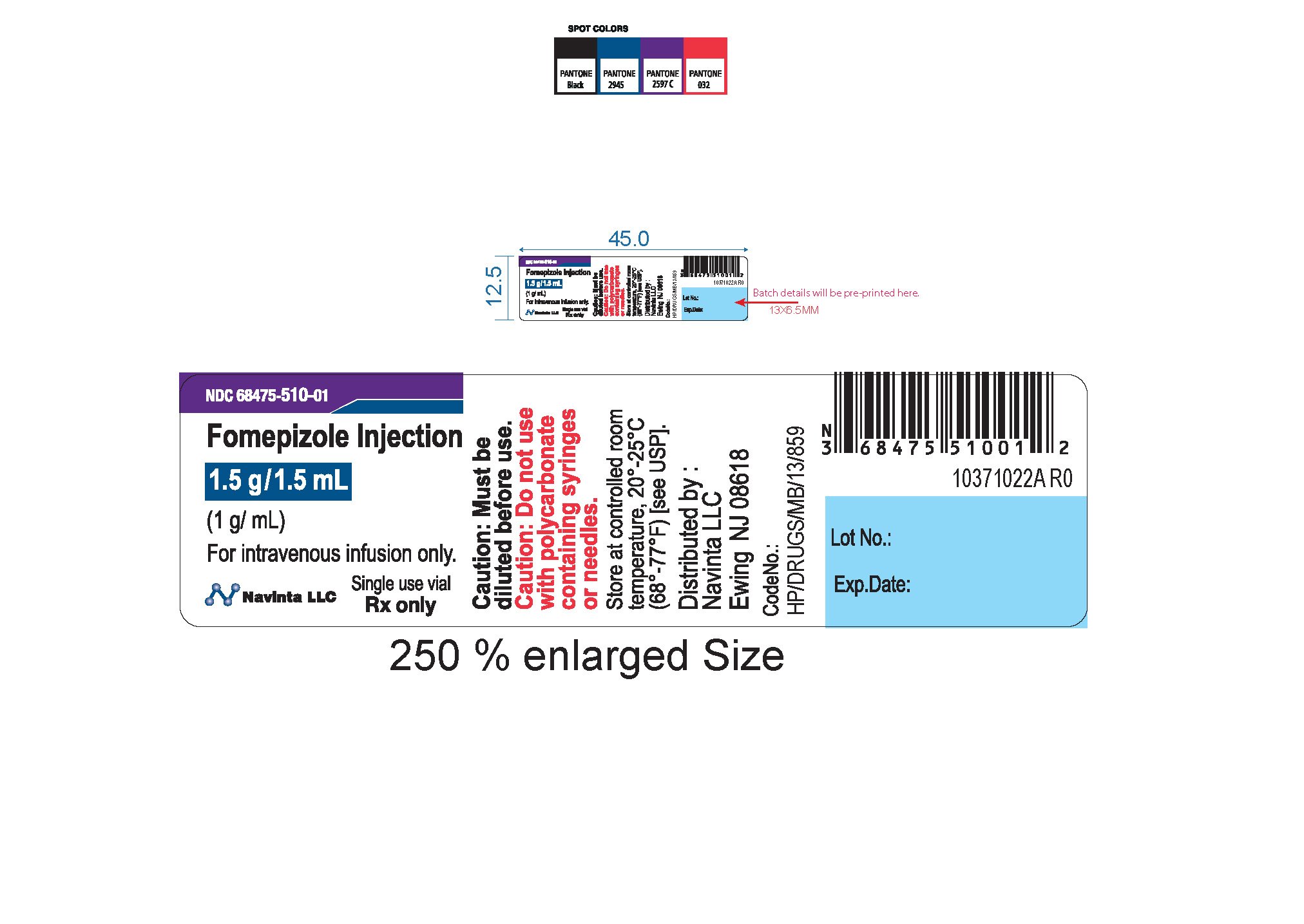 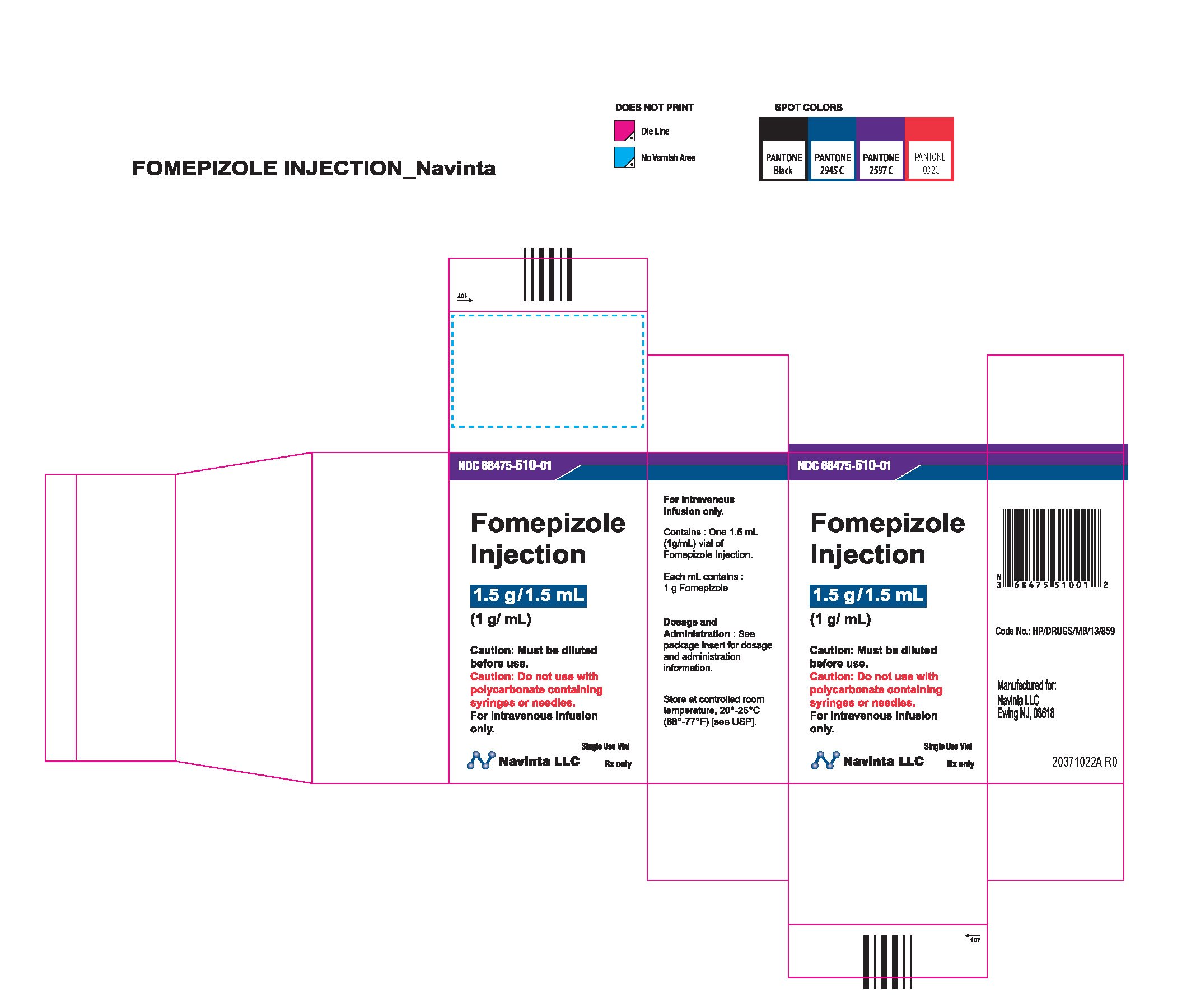