LIQUID E-Z-PAQUE® is a barium sulfate suspension (60% w/v, 41% w/w) for oral administration. Each 100 mL contains 60 g barium sulfate. Barium sulfate, due to its high molecular density is opaque to x-rays and, therefore, acts as a positive contrast agent for radiographic studies. The active ingredient is barium sulfate and its structural formula is BaSO4. Barium sulfate occurs as a fine, white, odorless, tasteless, bulky powder which is free from grittiness. Its aqueous suspensions are neutral to litmus. It is practically insoluble in water, solutions of acids and alkalies, and organic solvents.

Barium sulfate, due to its high molecular density is opaque to x-rays and, therefore, acts as a positive contrast agent for radiographic studies. Barium sulfate is biologically inert and, therefore, is not absorbed or metabolized by the body and is eliminated unchanged from the body.

Indications and Usage for E-Z Paque

For radiographic visualization of the gastrointestinal tract.

This product should not be used in patients with known gastric or intestinal perforation or hypersensitivity to barium sulfate products.

Diagnostic procedures which involve the use of radiopaque contrast agents should be carried out under the direction of personnel with the requisite training and with a thorough knowledge of the particular procedure to be performed. A history of bronchial asthma, atopy, as evidenced by hay fever and eczema, or a previous reaction to a contrast agent, warrant special attention. Caution should be exercised with the use of radiopaque media in severely debilitated patients and in those with marked hypertension or advanced cardiac disease.

Ingestion of this product is not recommended in patients with a history of food aspiration. If barium studies are required in these patients or in patients in whom integrity of the swallowing mechanism is unknown, proceed with caution. If this product is aspirated into the larynx, further administration should be immediately discontinued.

After any barium study of the GI tract, it is important to rehydrate the patient as quickly as possible to prevent impaction of the bowel by barium sulfate. To prevent barium sulfate impaction in the bowel, the use of mild laxatives such as milk of magnesia or lactulose, following completion of the examination may also be required. These mild laxatives are recommended on a routine basis and in patients with a history of constipation unless contraindicated.

Use with caution in patients with complete or nearly complete obstruction of the GI tract.

Before administration of this product patients should be instructed to:

The presence of barium sulfate formulations in the GI tract may alter the absorption of therapeutic agents taken concomitantly. In order to minimize any potential change in absorption, the separate administration of barium sulfate from that of other agents should be considered.

Radiation is known to cause harm to the unborn fetus exposed in utero. Therefore, radiographic procedures should only be used when, in the judgement of the physician, its use is deemed essential to the welfare of the pregnant patient.

Barium sulfate products may be used during lactation.

Adverse reactions, such as nausea, vomiting, diarrhea and abdominal cramping, accompanying the use of barium sulfate formulations are infrequent and usually mild. Severe reactions (approximately 1 in 1,000,000) and fatalities approximately 1 in 10,000,000) have occurred. Procedural complications are rare, but may include aspiration pneumonitis, barium sulfate impaction, granuloma formation, intravasation, embolization and peritonitis following intestinal perforation, vasovagal and syncopal episodes, and fatalities. It is of the utmost importance to be completely prepared to treat any such occurrence.

Due to the increased likelihood of allergic reactions in atopic patients, it is important that a complete history of known and suspected allergies as well as allergic-like symptoms, e.g., rhinitis, bronchial asthma, eczema and urticaria, must be obtained prior to any medical procedure utilizing these products. A mild allergic reaction would most likely include generalized pruritus, erythema or urticaria (approximately 1 in 250,000). Such reactions will generally respond to an antihistamine such as 50 mg of diphenhydramine or its equivalent. In the rarer, more serious reactions (approximately 1 in 1,000,000) laryngeal edema, bronchospasm or hypotension could develop. Severe reactions which may require emergency measures are often characterized by peripheral vasodilation, hypotension, reflex tachycardia, dyspnea, agitation, confusion and cyanosis progressing to unconsciousness. Treatment should be initiated immediately with 0.3 to 0.5 mL of 1:1000 epinephrine subcutaneously. If bronchospasm predominates, 0.25 to 0.50 grams of intravenous aminophylline should be given slowly. Appropriate vasopressors might be required. Adrenocorticosteroids, even if given intravenously, exert no significant effect on the acute allergic reactions for a few hours. The administration of these agents should not be regarded as emergency measures for treatment of allergic reactions.

Apprehensive patients may develop weakness, pallor, tinnitus, diaphoresis and bradycardia following the administration of any diagnostic agent. Such reactions are usually non-allergic in nature and are best treated by having the patient lie flat for an additional 10 to 30 minutes under observation.

On rare occasions following repeated administration, severe stomach cramps, nausea, vomiting, diarrhea or constipation may occur. These are transitory in nature and are not considered serious. Symptoms may be treated according to currently accepted standards of medical care.

The volume and concentration of LIQUID E-Z-PAQUE® to be administered will depend on the degree and extent of contrast required in the area(s) under examination and on the equipment and technique employed.

If the patient is scheduled for an MR study immediately or shortly after an upper GI procedure with this product, the regions of the GI tract which still contain this product may appear as areas of lowered signal intensity (black) with certain pulse sequences.

SHAKE WELL PRIOR TO USE, THE PRODUCT MUST BE FULLY SUSPENDED.

How is E-Z Paque Supplied 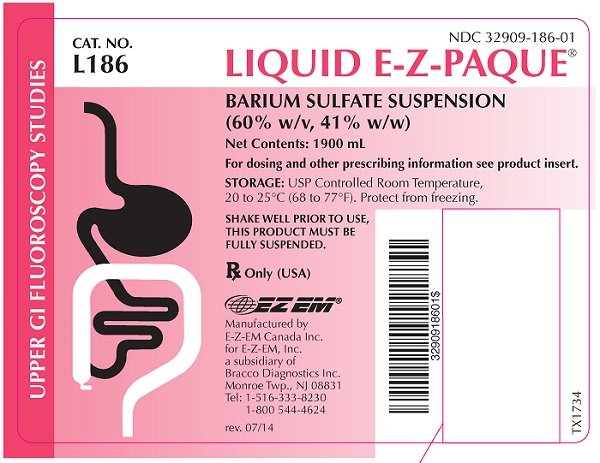 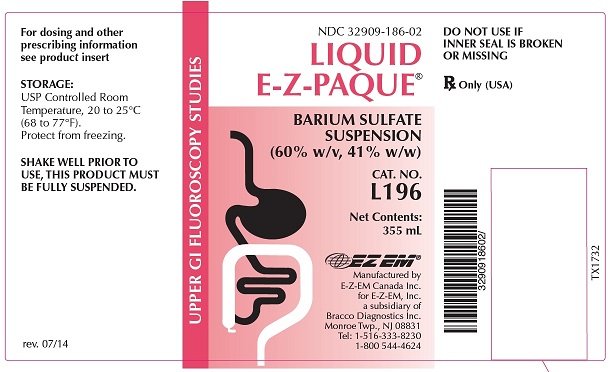