Danazol, USP is a synthetic steroid derived from ethisterone. It is a white to pale yellow crystalline powder, practically insoluble or insoluble in water, and sparingly soluble in alcohol. Chemically, Danazol, USP is 17α-Pregna-2,4-dien-20-yno [2,3-d]-isoxazol-17-ol, which has the following structural formula: 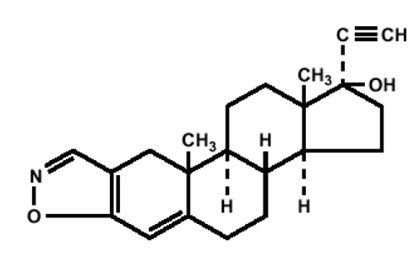 Danazol suppresses the pituitary-ovarian axis. This suppression is probably a combination of depressed hypothalamic-pituitary response to lowered estrogen production, the alteration of sex steroid metabolism, and interaction of Danazol with sex hormone receptors. The only other demonstrable hormonal effect is weak androgenic activity. Danazol depresses the output of both follicle-stimulating hormone (FSH) and luteinizing hormone (LH).

Recent evidence suggests a direct inhibitory effect at gonadal sites and a binding of Danazol to receptors of gonadal steroids at target organs. In addition, Danazol has been shown to significantly decrease IgG, IgM and IgA levels, as well as phospholipid and IgG isotope autoantibodies in patients with endometriosis and associated elevations of autoantibodies, suggesting this could be another mechanism by which it facilitates regression of the disease.

In the treatment of endometriosis, Danazol alters the normal and ectopic endometrial tissue so that it becomes inactive and atrophic. Complete resolution of endometrial lesions occurs in the majority of cases.

Changes in vaginal cytology and cervical mucus reflect the suppressive effect of Danazol on the pituitary-ovarian axis.

Changes in the menstrual pattern may occur.

Generally, the pituitary-suppressive action of Danazol is reversible. Ovulation and cyclic bleeding usually return within 60 to 90 days when therapy with Danazol is discontinued.

In the treatment of hereditary angioedema, Danazol at effective doses prevents attacks of the disease characterized by episodic edema of the abdominal viscera, extremities, face, and airway which may be disabling and, if the airway is involved, fatal. In addition, Danazol corrects partially or completely the primary biochemical abnormality of hereditary angioedema by increasing the levels of the deficient C1 esterase inhibitor (C1EI). As a result of this action the serum levels of the C4 component of the complement system are also increased.

Absorption: After oral administration of a 400 mg dose to healthy male volunteers, peak plasma concentrations of Danazol are reached between 2 and 8 hours, with a median Tmax value of 4 hours. Steady state conditions are observed following 6 days of twice daily dosing of Danazol.

The pharmacokinetic parameters for Danazol after administering a 400 mg oral dose to healthy males are summarized in the following table:

The pharmacokinetic parameters for Danazol after oral administration of 100, 200 and 400 mg single doses to healthy female volunteers are summarized in the following table:

Bioavailability studies indicate that blood levels do not increase proportionally with increases in the administered dose.

Single dose administration of Danazol in healthy female volunteers found that a 4 fold increase in dose produced only a 1.6 and 2.5 fold increase in AUC and a 1.3 and 2.2 fold increase in Cmax in the fasted and fed state, respectively. A similar degree of non-dose proportionality was observed at steady state.

Single dose administration of 100 mg and 200 mg capsules of Danazol to female volunteers showed that both the extent of availability and the maximum plasma concentration increased by 3 to 4 fold, respectively, following a meal (> 30 grams of fat), when compared to the fasted state. Further, food also delayed mean time to peak concentration of Danazol by about 30 minutes. Even after multiple dosing under less extreme food/fasting conditions, there remained approximately a 2 to 2.5 fold difference in bioavailability between the fed and fasted states.

Danazol is lipophilic and can partition into cell membranes, indicating the likelihood of distribution into deep tissue compartments.

Danazol appears to be metabolized and the metabolites are eliminated by renal and fecal pathways. The two primary metabolites excreted in the urine are 2-hydroxymethyl Danazol and ethisterone. At least ten different products were identified in feces.

Indications and Usage for Danazol

Danazol capsules are indicated for the treatment of endometriosis amenable to hormonal management.

Danazol capsules are indicated for the prevention of attacks of angioedema of all types (cutaneous, abdominal, laryngeal) in males and females.

Danazol should not be administered to patients with:

Use of Danazol in pregnancy is contraindicated. A sensitive test (e.g., beta subunit test if available) capable of determining early pregnancy is recommended immediately prior to start of therapy. Additionally a non-hormonal method of contraception should be used during therapy. If a patient becomes pregnant while taking Danazol, administration of the drug should be discontinued and the patient should be apprised of the potential risk to the fetus. Exposure to Danazol in utero may result in androgenic effects on the female fetus; reports of clitoral hypertrophy, labial fusion, urogenital sinus defect, vaginal atresia, and ambiguous genitalia have been received (see PRECAUTIONS, Pregnancy, Teratogenic Effects).

Thromboembolism, thrombotic and thrombophlebitic events including sagittal sinus thrombosis and life-threatening or fatal strokes have been reported.

Experience with long-term therapy with Danazol is limited. Peliosis hepatis and benign hepatic adenoma have been observed with long-term use. Peliosis hepatis and hepatic adenoma may be silent until complicated by acute, potentially life-threatening intraabdominal hemorrhage. The physician therefore should be alert to this possibility. Attempts should be made to determine the lowest dose that will provide adequate protection. If the drug was begun at a time of exacerbation of hereditary angioneurotic edema due to trauma, stress or other cause, periodic attempts to decrease or withdraw therapy should be considered.

Danazol has been associated with several cases of benign intracranial hypertension also known as pseudotumor cerebri. Early signs and symptoms of benign intracranial hypertension include papilledema, headache, nausea and vomiting, and visual disturbances. Patients with these symptoms should be screened for papilledema and, if present, the patients should be advised to discontinue Danazol immediately and be referred to a neurologist for further diagnosis and care.

Patients should be watched closely for signs of androgenic effects some of which may not be reversible even when drug administration is stopped.

Because Danazol may cause some degree of fluid retention, conditions that might be influenced by this factor, such as epilepsy, migraine, or cardiac or renal dysfunction, polycythemia and hypertension require careful observation. Use with caution in patients with diabetes mellitus.

Since hepatic dysfunction manifested by modest increases in serum transaminases levels has been reported in patients treated with Danazol, periodic liver function tests should be performed (see WARNINGS and ADVERSE REACTIONS).

Administration of Danazol has been reported to cause exacerbation of the manifestations of acute intermittent porphyria (see CONTRAINDICATIONS).

Laboratory monitoring of the hematologic state should be considered.

Prolongation of prothrombin time occurs in patients stabilized on warfarin.

Therapy with Danazol may cause an increase in carbamazepine levels in patients taking both drugs.

Danazol can cause insulin resistance. Caution should be exercised when used with antidiabetic drugs.

Danazol may raise the plasma levels of cyclosporin and tacrolimus, leading to an increase of the renal toxicity of these drugs. Monitoring of systemic concentrations of these drugs and appropriate dose adjustments may be needed when used concomitantly with Danazol.

The risk of myopathy and rhabdomyolysis is increased by concomitant administration of Danazol with statins such as simvastatin, atorvastatin and lovastatin. Caution should be exercised if used concomitantly. Consult the product labeling for statin drugs for specific information on dose restrictions in presence of Danazol.

Danazol treatment may interfere with laboratory determinations of testosterone, androstenedione and dehydroepiandrosterone. Other metabolic events include a reduction in thyroid binding globulin and T4 with increased uptake of T3, but without disturbance of thyroid stimulating hormone or of free thyroxin index.

Current data are insufficient to assess the carcinogenicity of Danazol.

Danazol administered orally to pregnant rats from the 6th through the 15th day of gestation at doses up to 250 mg/kg/day (7 to 15 times the human dose) did not result in drug-induced embryotoxicity or teratogenicity, nor difference in litter size, viability or weight of offspring compared to controls. In rabbits, the administration of Danazol on days 6 to 18 of gestation at doses of 60 mg/kg/day and above (2 to 4 times the human dose) resulted in inhibition of fetal development.

Clinical studies of Danazol did not include sufficient numbers of subjects aged 65 and over to determine the safety and effectiveness of Danazol in elderly patients.

The following events have been reported in association with the use of Danazol:

Androgen like effects include weight gain, acne and seborrhea. Mild hirsutism, edema, hair loss, voice change, which may take the form of hoarseness, sore throat or of instability or deepening of pitch, may occur and may persist after cessation of therapy. Hypertrophy of the clitoris is rare.

Other possible endocrine effects are menstrual disturbances including spotting, alteration of the timing of the cycle and amenorrhea. Although cyclical bleeding and ovulation usually return within 60 to 90 days after discontinuation of therapy with Danazol, persistent amenorrhea has occasionally been reported.

Flushing, sweating, vaginal dryness and irritation and reduction in breast size, may reflect lowering of estrogen. Nervousness and emotional lability have been reported. In the male a modest reduction in spermatogenesis may be evident during treatment. Abnormalities in semen volume, viscosity, sperm count, and motility may occur in patients receiving long-term therapy.

Hepatic dysfunction, as evidenced by reversible elevated serum enzymes and/or jaundice, has been reported in patients receiving a daily dosage of Danazol of 400 mg or more. It is recommended that patients receiving Danazol be monitored for hepatic dysfunction by laboratory tests and clinical observation. Serious hepatic toxicity including cholestatic jaundice, peliosis hepatis, hepatic adenoma, hepatocellular injury, hepatocellular jaundice and hepatic failure have been reported (see WARNINGS and PRECAUTIONS).

In moderate to severe disease, or in patients infertile due to endometriosis, a starting dose of 800 mg given in two divided doses is recommended. Amenorrhea and rapid response to painful symptoms is best achieved at this dosage level. Gradual downward titration to a dose sufficient to maintain amenorrhea may be considered depending upon patient response. For mild cases, an initial daily dose of 200 mg to 400 mg given in two divided doses is recommended and may be adjusted depending on patient response. Therapy should begin during menstruation. Otherwise, appropriate tests should be performed to ensure that the patient is not pregnant while on therapy with Danazol capsules (see CONTRAINDICATIONS and WARNINGS). It is essential that therapy continue uninterrupted for 3 to 6 months but may be extended to 9 months if necessary. After termination of therapy, if symptoms recur, treatment can be reinstituted.

The dosage requirements for continuous treatment of hereditary angioedema with Danazol capsules should be individualized on the basis of the clinical response of the patient. It is recommended that the patient be started on 200 mg, two or three times a day. After a favorable initial response is obtained in terms of prevention of episodes of edematous attacks, the proper continuing dosage should be determined by decreasing the dosage by 50% or less at intervals of one to three months or longer if frequency of attacks prior to treatment dictates. If an attack occurs, the daily dosage may be increased by up to 200 mg. During the dose adjusting phase, close monitoring of the patient's response is indicated, particularly if the patient has a history of airway involvement.

How is Danazol Supplied

Dispense in a tight, light-resistant container as defined in the USP, with a child-resistant closure (as required). 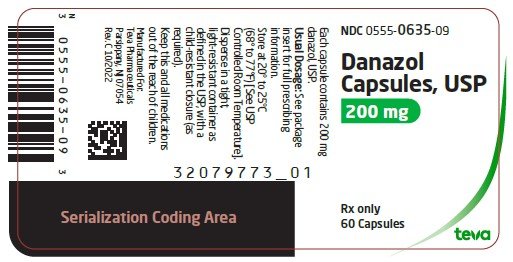 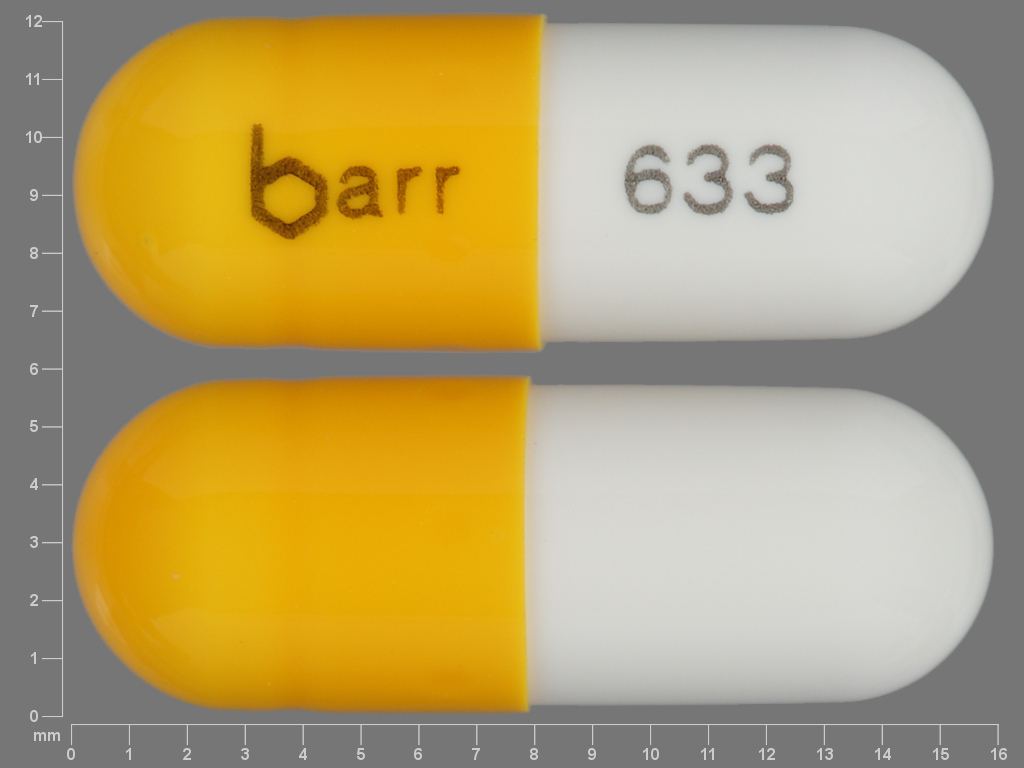