Powder for reconstitution for use in central venous access devices

Cathflo® Activase® (Alteplase) is a tissue plasminogen activator (t‑PA) produced by recombinant DNA technology. It is a sterile, purified glycoprotein of 527 amino acids. It is synthesized using the complementary DNA (cDNA) for natural human tissue‑type plasminogen activator (t‑PA) obtained from an established human cell line. The manufacturing process involves secretion of the enzyme Alteplase into the culture medium by an established mammalian cell line (Chinese hamster ovary cells) into which the cDNA for Alteplase has been genetically inserted.

Each vial of Cathflo Activase contains 2.2 mg of Alteplase (which includes a 10% overfill), 77 mg of L‑arginine, 0.2 mg of polysorbate 80, and phosphoric acid for pH adjustment. Each reconstituted vial will deliver 2 mg of Cathflo Activase, at a pH of approximately 7.3.

In patients with acute myocardial infarction administered 100 mg of Activase as an accelerated intravenous infusion over 90 minutes, plasma clearance occurred with an initial half‑life of less than 5 minutes and a terminal half‑life of 72 minutes. Clearance is mediated primarily by the liver (2).

When Cathflo Activase is administered for restoration of function to central venous access devices according to the instructions in DOSAGE AND ADMINISTRATION, circulating plasma levels of Alteplase are not expected to reach pharmacologic concentrations. If a 2 mg dose of Alteplase were administered by bolus injection directly into the systemic circulation (rather than instilled into the catheter), the concentration of circulating Alteplase would be expected to return to endogenous circulating levels of 5–10 ng/mL within 30 minutes (1).

A placebo‑controlled, double‑blind, randomized trial (Trial 1) and a larger open‑label trial (Trial 2) investigated the use of Alteplase in predominately adult patients who had an indwelling CVAD for administration of chemotherapy, total parenteral nutrition, or long‑term administration of antibiotics or other medications. Both studies enrolled patients whose catheters were not functioning (defined as the inability to withdraw at least 3 mL of blood from the device) but had the ability to instill the necessary volume of study drug. Patients with hemodialysis catheters or a known mechanical occlusion were excluded from both studies. Also excluded were patients considered at high risk for bleeding or embolization (see PRECAUTIONS, Bleeding), as well as patients who were younger than 2 years old or weighed less than 10 kg. Restoration of function was assessed by successful withdrawal of 3 mL of blood and infusion of 5 mL of saline through the catheter.

Trial 1 tested the efficacy of a 2 mg/2 mL Alteplase dose in restoring function to occluded catheters in 150 patients with catheter occlusion up to 24 hours in duration. Patients were randomized to receive either Alteplase or placebo instilled into the lumen of the catheter, and catheter function was assessed at 120 minutes. Restoration of function was assessed by successful withdrawal of 3 mL of blood and infusion of 5 mL of saline through the catheter. All patients whose catheters did not meet these criteria were then administered Alteplase, until function was restored or each patient had received up to two active doses. After the initial dose of study agent, 51 (67%) of 76 patients randomized to Alteplase and 12 (16%) of 74 patients randomized to placebo had catheter function restored. This resulted in a treatment‑associated difference of 51% (95% CI is 37% to 64%). A total of 112 (88%) of 127 Alteplase‑treated patients had restored function after up to two doses.

Three hundred forty-six patients who had successful treatment outcome were evaluated at 30 days after treatment. The incidence of recurrent catheter dysfunction within this period was 26%.

Trial 3 was an open‑label, single‑arm trial in 310 patients between the ages of 2 weeks and 17 years. All patients had catheter dysfunction defined as the inability to withdraw blood (at least 3 mL for patients ≥ 10 kg or at least 1 mL for patients < 10 kg). Catheter dysfunction could be present for any duration. The indwelling CVADs (single-, double-, and triple‑lumen, and implanted ports) were used for administration of chemotherapy, blood products or fluid replacement, total parenteral nutrition, antibiotics, or other medications. Patients with hemodialysis catheters or known mechanical occlusions were excluded from the study, as were patients considered at high risk for bleeding or embolization. Patients were treated with up to two doses of Cathflo Activase instilled into the catheter lumen. For patients weighing ≥ 30 kg, the dose was 2 mg in 2 mL. For patients weighing < 30 kg, the dose was 110% of the estimated internal lumen volume, not to exceed 2 mg in 2 mL. Restoration of function was assessed at 30 and 120 minutes (if required) after administration of each dose. Restoration of function was defined as the ability to withdraw fluid (3 mL in patients ≥ 10 kg; 1 mL in patients < 10 kg) and infuse saline (5 mL in patients ≥ 10 kg; 3 mL in patients < 10 kg).

Cathflo® Activase® (Alteplase) is indicated for the restoration of function to central venous access devices as assessed by the ability to withdraw blood.

Cathflo Activase should not be administered to patients with known hypersensitivity to Alteplase or any component of the formulation (see DESCRIPTION).

Catheter dysfunction may be caused by a variety of conditions other than thrombus formation, such as catheter malposition, mechanical failure, constriction by a suture, and lipid deposits or drug precipitates within the catheter lumen. These types of conditions should be considered before treatment with Cathflo Activase.

Because of the risk of damage to the vascular wall or collapse of soft‑walled catheters, vigorous suction should not be applied during attempts to determine catheter occlusion.

Excessive pressure should be avoided when Cathflo Activase is instilled into the catheter. Such force could cause rupture of the catheter or expulsion of the clot into the circulation.

The most frequent adverse reaction associated with all thrombolytics in all approved indications is bleeding (3,4). Cathflo Activase has not been studied in patients known to be at risk for bleeding events that may be associated with the use of thrombolytics. Caution should be exercised with patients who have active internal bleeding or who have had any of the following within 48 hours: surgery, obstetrical delivery, percutaneous biopsy of viscera or deep tissues, or puncture of non‑compressible vessels. In addition, caution should be exercised with patients who have thrombocytopenia, other hemostatic defects (including those secondary to severe hepatic or renal disease), or any condition for which bleeding constitutes a significant hazard or would be particularly difficult to manage because of its location, or who are at high risk for embolic complications (e.g., venous thrombosis in the region of the catheter). Death and permanent disability have been reported in patients who have experienced stroke and other serious bleeding episodes when receiving pharmacologic doses of a thrombolytic.

Should serious bleeding in a critical location (e.g., intracranial, gastrointestinal, retroperitoneal, pericardial) occur, treatment with Cathflo Activase should be stopped and the drug should be withdrawn from the catheter.

The interaction of Cathflo Activase with other drugs has not been formally studied. Concomitant use of drugs affecting coagulation and/or platelet function has not been studied.

Potential interactions between Cathflo Activase and laboratory tests have not been studied.

Long‑term studies in animals have not been performed to evaluate the carcinogenic potential or the effect on fertility. Short-term studies that evaluated tumorigenicity of Alteplase and effect on tumor metastases were negative in rodents. Studies to determine mutagenicity (Ames test) and chromosomal aberration assays in human lymphocytes were negative at all concentrations tested. Cytotoxicity, as reflected by a decrease in mitotic index, was evidenced only after prolonged exposure at high concentrations exceeding those expected to be achieved with Cathflo Activase.

There are no adequate and well‑controlled studies in pregnant women. Cathflo Activase should be used during pregnancy only if the potential benefit justifies the potential risk to the fetus.

A total of 432 subjects under age 17 have received Cathflo Activase in the three trials. Rates of serious adverse events were similar in the pediatric and adult patients, as were the rates of catheter function restoration.

In 312 patients enrolled who were age 65 years and over, no incidents of intracranial hemorrhage (ICH), embolic events, or major bleeding events were observed. One hundred three of these patients were age 75 years and over, and 12 were age 85 years and over. The effect of Alteplase on common age-related comorbidities has not been studied. In general, caution should be used in geriatric patients with conditions known to increase the risk of bleeding (see PRECAUTIONS, Bleeding).

The following adverse reactions are discussed in greater detail in Section PRECAUTIONS of the label:

In the clinical trials, the most serious adverse events reported after treatment were sepsis (see PRECAUTIONS, Infections), gastrointestinal bleeding, and venous thrombosis.

Four catheter-related sepsis events occurred from 15 minutes to 1 day after treatment with Alteplase, and a fifth sepsis event occurred on Day 3 after Alteplase treatment. All 5 patients had positive catheter or peripheral blood cultures within 24 hours after symptom onset.

Three patients had a major hemorrhage from a gastrointestinal source from 2 to 3 days after Alteplase treatment. One case of injection site hemorrhage was observed at 4 hours after treatment in a patient with pre-existing thrombocytopenia. These events may have been related to underlying disease and treatments for malignancy, but a contribution to occurrence of the events from Alteplase cannot be ruled out. There were no reports of intracranial hemorrhage.

Three cases of subclavian and upper extremity deep venous thrombosis were reported 3 to 7 days after treatment. These events may have been related to underlying disease or to the long-term presence of an indwelling catheter, but a contribution to occurrence of the events from Alteplase treatment cannot be ruled out. There were no reports of pulmonary emboli.

There were no gender-related differences observed in the rates of adverse reactions. Adverse reactions profiles were similar across all age subgroups.

No pediatric patients in Trial 3 experienced an intracranial hemorrhage, major hemorrhage, thrombosis, or an embolic event.

Cathflo® Activase® (Alteplase) is for instillation into the dysfunctional catheter at a concentration of 1 mg/mL.

If catheter function is not restored at 120 minutes after 1 dose of Cathflo Activase, a second dose may be instilled (see Instructions for Administration). There is no efficacy or safety information on dosing in excess of 2 mg per dose for this indication. Studies have not been performed with administration of total doses greater than 4 mg (two 2‑mg doses).

No other medication should be added to solutions containing Cathflo Activase.

Instillation of Solution into the Catheter

Any unused solution should be discarded.

Store lyophilized Cathflo Activase at refrigerated temperature (2–8°C/36–46°F). Do not use beyond the expiration date on the vial. Protect the lyophilized material during extended storage from excessive exposure to light.

Cathflo Activase (Alteplase) for injection is supplied as a sterile, lyophilized powder in 2 mg vials.

Representative sample of labeling (see the HOW SUPPLIED section for complete listing): 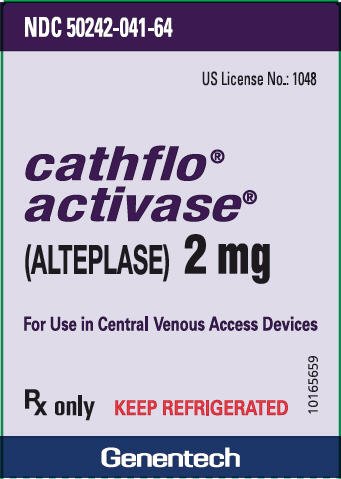