CARNITOR ® (levocarnitine) is a carrier molecule in the transport of long-chain fatty acids across the inner mitochondrial membrane.

CARNITOR ® (levocarnitine) Injection is a sterile aqueous solution containing 1 g of levocarnitine per 5 mL vial. The pH is adjusted to 6.0 - 6.5 with hydrochloric acid or sodium hydroxide.

CARNITOR ® (levocarnitine) is a naturally occurring substance required in mammalian energy metabolism. It has been shown to facilitate long-chain fatty acid entry into cellular mitochondria, thereby delivering substrate for oxidation and subsequent energy production. Fatty acids are utilized as an energy substrate in all tissues except the brain. In skeletal and cardiac muscle, fatty acids are the main substrate for energy production.

Primary systemic carnitine deficiency is characterized by low concentrations of levocarnitine in plasma, RBC, and/or tissues. It has not been possible to determine which symptoms are due to carnitine deficiency and which are due to an underlying organic acidemia, as symptoms of both abnormalities may be expected to improve with CARNITOR ®. The literature reports that carnitine can promote the excretion of excess organic or fatty acids in patients with defects in fatty acid metabolism and/or specific organic acidopathies that bioaccumulate acylCoA esters. 1-6

Secondary carnitine deficiency can be a consequence of inborn errors of metabolism or iatrogenic factors such as hemodialysis. CARNITOR ® may alleviate the metabolic abnormalities of patients with inborn errors that result in accumulation of toxic organic acids. Conditions for which this effect has been demonstrated are: glutaric aciduria II, methyl malonic aciduria, propionic acidemia, and medium chain fatty acylCoA dehydrogenase deficiency. 7,8 Autointoxication occurs in these patients due to the accumulation of acylCoA compounds that disrupt intermediary metabolism. The subsequent hydrolysis of the acylCoA compound to its free acid results in acidosis which can be life-threatening. Levocarnitine clears the acylCoA compound by formation of acylcarnitine, which is quickly excreted. Carnitine deficiency is defined biochemically as abnormally low plasma concentrations of free carnitine, less than 20 µmol/L at one week post term and may be associated with low tissue and/or urine concentrations. Further, this condition may be associated with a plasma concentration ratio of acylcarnitine/levocarnitine greater than 0.4 or abnormally elevated concentrations of acylcarnitine in the urine. In premature infants and newborns, secondary deficiency is defined as plasma levocarnitine concentrations below age-related normal concentrations.

End Stage Renal Disease (ESRD) patients on maintenance hemodialysis may have low plasma carnitine concentrations and an increased ratio of acylcarnitine/carnitine because of reduced intake of meat and dairy products, reduced renal synthesis and dialytic losses. Certain clinical conditions common in hemodialysis patients such as malaise, muscle weakness, cardiomyopathy and cardiac arrhythmias may be related to abnormal carnitine metabolism.

Pharmacokinetic and clinical studies with CARNITOR ® have shown that administration of levocarnitine to ESRD patients on hemodialysis results in increased plasma levocarnitine concentrations.

The plasma concentration profiles of levocarnitine after a slow 3 minute intravenous bolus dose of 20 mg/kg of CARNITOR ® were described by a two-compartment model. Following a single i.v. administration, approximately 76% of the levocarnitine dose was excreted in the urine during the 0-24h interval. Using plasma concentrations uncorrected for endogenous levocarnitine, the mean distribution half life was 0.585 hours and the mean apparent terminal elimination half life was 17.4 hours.

Total body clearance of levocarnitine (Dose/AUC including endogenous baseline concentrations) was a mean of 4.00 L/h.

Levocarnitine was not bound to plasma protein or albumin when tested at any concentration or with any species including the human. 9

In a 9-week study, 12 ESRD patients undergoing hemodialysis for at least 6 months received CARNITOR ® 20 mg/kg three times per week after dialysis. Prior to initiation of CARNITOR ® therapy, mean plasma levocarnitine concentrations were approximately 20 µmol/L pre-dialysis and 6 µmol/L post-dialysis. The table summarizes the pharmacokinetic data (mean ± SD µmol/L) after the first dose of CARNITOR ® and after 8 weeks of CARNITOR ® therapy.

After one week of CARNITOR ® therapy (3 doses), all patients had trough concentrations between 54 and 180 µmol/L (normal 40-50 µmol/L) and concentrations remained relatively stable or increased over the course of the study.

In a dose-ranging study in ESRD patients undergoing hemodialysis, patients received 10, 20, or 40 mg/kg CARNITOR ® 3 times per week following dialysis (N~30 for each dose group). Mean ± SD trough levocarnitine concentrations (µmol/L) by dose after 12 and 24 weeks of therapy are summarized in the table.

While the efficacy of CARNITOR ® to increase carnitine concentrations in patients with ESRD undergoing dialysis has been demonstrated, the effects of supplemental carnitine on the signs and symptoms of carnitine deficiency and on clinical outcomes in this population have not been determined.

After attainment of steady state following 4 days of oral administration of CARNITOR ® Tablets (1980 mg q12h) or Oral Solution (2000 mg q12h) to 15 healthy male volunteers, the mean urinary excretion of levocarnitine during a single dosing interval (12h) was about 9% of the orally administered dose (uncorrected for endogenous urinary excretion).

Indications and Usage for Carnitor Injection

For the acute and chronic treatment of patients with an inborn error of metabolism which results in secondary carnitine deficiency.

For the prevention and treatment of carnitine deficiency in patients with end stage renal disease who are undergoing dialysis.

Serious hypersensitivity reactions, including anaphylaxis, laryngeal edema, and bronchospasm have been reported following CARNITOR ® administration, mostly in patients with end stage renal disease who are undergoing dialysis. Some reactions occurred within minutes after intravenous administration of CARNITOR ®.

If a severe hypersensitivity reaction occurs, discontinue CARNITOR ® treatment and initiate appropriate medical treatment. Consider the risks and benefits of re-administering CARNITOR ® to individual patients following a severe reaction. If the decision is made to re-administer the product, monitor patients for a reoccurrence of signs and symptoms of a severe hypersensitivity reaction.

The safety and efficacy of oral levocarnitine has not been evaluated in patients with renal insufficiency. Chronic administration of high doses of oral levocarnitine in patients with severely compromised renal function or in ESRD patients on dialysis may result in accumulation of the potentially toxic metabolites, trimethylamine (TMA) and trimethylamine-N-oxide (TMAO), since these metabolites are normally excreted in the urine.

Reports of INR increase with the use of warfarin have been observed. It is recommended that INR levels be monitored in patients on warfarin therapy after the initiation of treatment with levocarnitine or after dose adjustments.

Mutagenicity tests performed in Salmonella typhimurium, Saccharomyces cerevisiae, and Schizosaccharomyces pombe indicate that levocarnitine is not mutagenic. No long-term animal studies have been performed to evaluate the carcinogenic potential of levocarnitine.

Reproductive studies have been performed in rats and rabbits at doses up to 3.8 times the human dose on the basis of surface area and have revealed no evidence of impaired fertility or harm to the fetus due to CARNITOR ®. There are, however, no adequate and well controlled studies in pregnant women.

Because animal reproduction studies are not always predictive of human response, this drug should be used during pregnancy only if clearly needed.

Levocarnitine supplementation in nursing mothers has not been specifically studied.

Transient nausea and vomiting have been observed. Less frequent adverse reactions are body odor, nausea, and gastritis. An incidence for these reactions is difficult to estimate due to the confounding effects of the underlying pathology.

The table below lists the adverse events that have been reported in two double-blind, placebo-controlled trials in patients on chronic hemodialysis. Events occurring at ≥5% are reported without regard to causality.

The following adverse reactions have been reported:

The recommended dose is 50 mg/kg given as a slow 2-3 minute bolus injection or by infusion. Often a loading dose is given in patients with severe metabolic crisis, followed by an equivalent dose over the following 24 hours. It should be administered q3h or q4h, and never less than q6h either by infusion or by intravenous injection. All subsequent daily doses are recommended to be in the range of 50 mg/kg or as therapy may require. The highest dose administered has been 300 mg/kg.

The recommended starting dose is 10-20 mg/kg dry body weight as a slow 2-3 minute bolus injection into the venous return line after each dialysis session. Initiation of therapy may be prompted by trough (pre-dialysis) plasma levocarnitine concentrations that are below normal (40-50 µmol/L). Dose adjustments should be guided by trough (pre-dialysis) levocarnitine concentrations, and downward dose adjustments (e.g. to 5 mg/kg after dialysis) may be made as early as the third or fourth week of therapy.

How is Carnitor Injection Supplied

Store vials at controlled room temperature (25°C). See USP. Discard unused portion of an opened vial, as the formulation does not contain a preservative.

Each 5mL vial contains: 1g of Levocarnitine as an
aqueous solution 1g/5mL [200mg/mL]. May contain
HCl or NaOH for pH adjustment.

Discard any unused portion as the formulation does
not contain preservative. 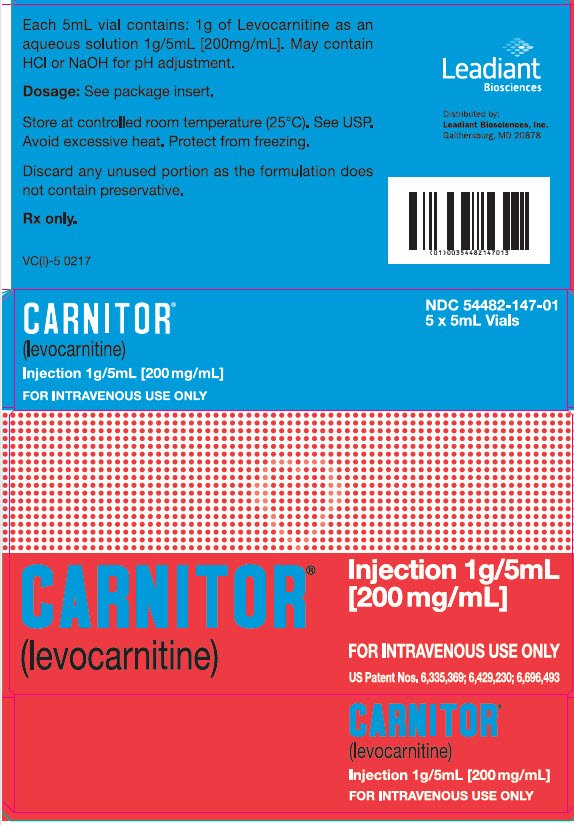 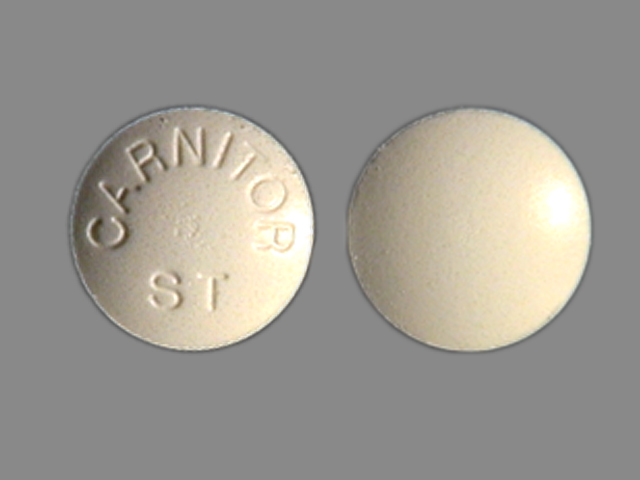