Indications and Usage for Albenza

Albenza is indicated for the treatment of parenchymal neurocysticercosis due to active lesions caused by larval forms of the pork tapeworm, Taenia solium.

Albenza is indicated for the treatment of cystic hydatid disease of the liver, lung, and peritoneum, caused by the larval form of the dog tapeworm, Echinococcus granulosus.

Dosing of Albenza will vary depending upon the indication. Albenza tablets may be crushed or chewed and swallowed with a drink of water. Albenza tablets should be taken with food [see Clinical Pharmacology (12.3)].

Patients being treated for neurocysticercosis should receive appropriate steroid and anticonvulsant therapy as required. Oral or intravenous corticosteroids should be considered to prevent cerebral hypertensive episodes during the first week of treatment [see Warnings and Precautions (5.3)].

Monitoring for Safety Before and During Treatment

Albenza is contraindicated in patients with known hypersensitivity to the benzimidazole class of compounds or any components of Albenza.

Fatalities associated with the use of Albenza have been reported due to granulocytopenia or pancytopenia. Albenza may cause bone marrow suppression, aplastic anemia, and agranulocytosis. Monitor blood counts at the beginning of each 28-day cycle of therapy, and every 2 weeks while on therapy with Albenza in all patients. Patients with liver disease and patients with hepatic echinococcosis are at increased risk for bone marrow suppression and warrant more frequent monitoring of blood counts. Discontinue Albenza if clinically significant decreases in blood cell counts occur.

Albenza may cause fetal harm and should not be used in pregnant women except in clinical circumstances where no alternative management is appropriate. Obtain pregnancy test prior to prescribing Albenza to women of reproductive potential. Advise women of reproductive potential to use effective birth control for the duration of Albenza therapy and for one month after end of therapy. Immediately discontinue Albenza if a patient becomes pregnant and apprise the patient of the potential hazard to the fetus [see Use in Specific Populations (8.1, 8.3)].

Risk of Neurologic Symptoms in Neurocysticercosis

Patients being treated for neurocysticercosis should receive steroid and anticonvulsant therapy to prevent neurological symptoms (e.g. seizures, increased intracranial pressure and focal signs) as a result of an inflammatory reaction caused by death of the parasite within the brain.

Risk of Retinal Damage in Patients with Retinal Neurocysticercosis

Cysticercosis may involve the retina. Before initiating therapy for neurocysticercosis, examine the patient for the presence of retinal lesions. If such lesions are visualized, weigh the need for anticysticeral therapy against the possibility of retinal damage resulting from inflammatory damage caused by Albenza-induced death of the parasite.

In clinical trials, treatment with Albenza has been associated with mild to moderate elevations of hepatic enzymes in approximately 16% of patients. These elevations have generally returned to normal upon discontinuation of therapy. There have also been case reports of acute liver failure of uncertain causality and hepatitis [see Adverse Reactions (6)].

Monitor liver enzymes (transaminases) before the start of each treatment cycle and at least every 2 weeks during treatment. If hepatic enzymes exceed twice the upper limit of normal, consideration should be given to discontinuing Albenza therapy based on individual patient circumstances. Restarting Albenza treatment in patients whose hepatic enzymes have normalized off treatment is an individual decision that should take into account the risk/benefit of further Albenza usage. Perform laboratory tests frequently if Albenza treatment is restarted.

Unmasking of Neurocysticercosis in Hydatid Patients

Undiagnosed neurocysticercosis may be uncovered in patients treated with Albenza for other conditions. Patients with epidemiologic factors who are at risk for neurocysticercosis should be evaluated prior to initiation of therapy.

The adverse reaction profile of Albenza differs between hydatid disease and neurocysticercosis. Adverse reactions occurring with a frequency of 1% or greater in either disease are described in Table 2 below.

These symptoms were usually mild and resolved without treatment. Treatment discontinuations were predominantly due to leukopenia (0.7%) or hepatic abnormalities (3.8% in hydatid disease). The following incidence reflects adverse reactions that were reported to be at least possibly or probably related to Albenza.

The following adverse events were observed at an incidence of less than 1%:

Blood and Lymphatic System Disorders: There have been reports of leukopenia, granulocytopenia, pancytopenia, agranulocytosis, or thrombocytopenia [see Warnings and Precautions (5.1)].

The following adverse reactions have been identified during post-approval use of Albenza. Because these reactions are reported voluntarily from a population of uncertain size, it is not always possible to reliably estimate their frequency or establish a causal relationship to drug exposure.

Steady-state trough concentrations of albendazole sulfoxide were about 56% higher when 8 mg dexamethasone was co-administered with each dose of albendazole (15 mg/kg/day) in 8 neurocysticercosis patients.

Following a single dose of albendazole (400 mg), the pharmacokinetics of theophylline (aminophylline 5.8 mg/kg infused over 20 minutes) were unchanged. Albendazole induces cytochrome P450 1A in human hepatoma cells; therefore, it is recommended that plasma concentrations of theophylline be monitored during and after treatment.

There are limited data on use of Albenza in pregnant women to inform a drug-associated risk of major birth defects and miscarriage. In published studies, single-dose albendazole exposure during pregnancy did not show evidence of an increased risk of adverse maternal or fetal outcomes; however, this finding cannot be extrapolated to multiple-dose exposures (see Data).

A Cochrane review could not provide sufficient evidence of the impact of antihelminthics (including albendazole) on the pregnancy outcomes of low birthweight, perinatal mortality and preterm birth. In a large trial of about 2507 women, albendazole use during the second or third trimester of pregnancy had no overall effect on birth weight, perinatal mortality, or congenital anomalies. With a limited sample size and single-does exposure, another study could not rule out a two-fold increased risk of major malformations [4.7% vs. 2.2%; OR 2.2 (95% confidence interval (CI) 0.5 to 10.1); p = 0.26].

The developmental and health benefits of breastfeeding should be considered along with the mother’s clinical need for Albenza and any potential adverse effects on the breastfed child from Albenza or from the underlying maternal condition.

Obtain pregnancy test prior to prescribing Albenza to women of reproductive potential.

Advise women of reproductive potential to use effective birth control for the duration of Albenza therapy and for one month after end of therapy.

Hydatid disease is uncommon in infants and young children. In neurocysticercosis, the efficacy of Albenza in children appears to be similar to that in adults.

In patients aged 65 and older with either hydatid disease or neurocysticercosis, there was insufficient data to determine whether the safety and effectiveness of Albenza is different from that of younger patients.

The pharmacokinetics of Albenza in patients with impaired renal function has not been studied.

In patients with evidence of extrahepatic obstruction (n = 5), the systemic availability of albendazole sulfoxide was increased, as indicated by a 2-fold increase in maximum serum concentration and a 7-fold increase in area under the curve. The rate of absorption/conversion and elimination of albendazole sulfoxide appeared to be prolonged with mean Tmax and serum elimination half-life values of 10 hours and 31.7 hours, respectively. Plasma concentrations of parent Albenza were measurable in only 1 of 5 patients.

In case of overdosage, symptomatic therapy and general supportive measures are recommended.

Albenza (albendazole) is an orally administered anthelmintic drug. Chemically, it is methyl 5-(propylthio)-2-benzimidazolecarbamate. Its molecular formula is C12H15N3O2S. Its molecular weight is 265.34. It has the following chemical structure:

Each white to off-white, circular, biconvex, bevel-edged film coated, TILTAB tablet is debossed with “ap” and “550” and contains 200 mg of albendazole.

Albendazole is poorly absorbed from the gastrointestinal tract due to its low aqueous solubility. Albendazole concentrations are negligible or undetectable in plasma as it is rapidly converted to the sulfoxide metabolite prior to reaching the systemic circulation. The systemic anthelmintic activity has been attributed to the primary metabolite, albendazole sulfoxide. Oral bioavailability appears to be enhanced when albendazole is coadministered with a fatty meal (estimated fat content 40 grams) as evidenced by higher (up to 5-fold on average) plasma concentrations of albendazole sulfoxide as compared to the fasted state.

Following 4 weeks of treatment with albendazole (200 mg three times daily), 12 patients’ plasma concentrations of albendazole sulfoxide were approximately 20% lower than those observed during the first half of the treatment period, suggesting that albendazole may induce its own metabolism.

Albendazole sulfoxide is 70% bound to plasma protein and is widely distributed throughout the body; it has been detected in urine, bile, liver, cyst wall, cyst fluid, and cerebrospinal fluid (CSF). Concentrations in plasma were 3-fold to 10-fold and 2-fold to 4-fold higher than those simultaneously determined in cyst fluid and CSF, respectively.

Although no studies have investigated the effect of age on albendazole sulfoxide pharmacokinetics, data in 26 hydatid cyst patients (up to 79 years) suggest pharmacokinetics similar to those in young healthy subjects.

Albenza binds to the colchicine-sensitive site of β-tubulin inhibiting their polymerization into microtubules. The decrease in microtubules in the intestinal cells of the parasites decreases their absorptive function, especially the uptake of glucose by the adult and larval forms of the parasites, and also depletes glycogen storage. Insufficient glucose results in insufficient energy for the production of adenosine trisphosphate (ATP) and the parasite eventually dies.

Parasitic resistance to albendazole is caused by changes in amino acids that result in changes in the β-tubulin protein. This causes reduced binding of the drug to β-tubulin.

In the specified treatment indications albendazole appears to be active against the larval forms of the following organisms:

Long-term carcinogenicity studies were conducted in mice and rats.

No evidence of increased incidence of tumors was found in the mice or rats at up to 400 mg/kg/day or 20 mg/kg/day respectively (2 times and 0.2 times the recommended human dose on a body surface area basis).

In genotoxicity tests, albendazole was found negative in an Ames Salmonella/Microsome Plate mutation assay, Chinese Hamster Ovary chromosomal aberration test, and in vivo mouse micronucleus test. In the in vitro BALB/3T3 cells transformation assay, albendazole produced weak activity in the presence of metabolic activation while no activity was found in the absence of metabolic activation.

Albendazole did not adversely affect male or female fertility in the rat at an oral dose of 30 mg/kg/day (0.32 times the recommended human dose based on body surface area in mg/m2).

Each white to off-white, circular, biconvex, bevel-edged film coated, TILTAB tablet is debossed with “ap” and “550” and contains 200 mg of albendazole.

Patients should be advised that:

Albenza and TILTAB are registered trademarks of GlaxoSmithKline, used with permission.

Distributed by:
Amneal Specialty, a division of
Amneal Pharmaceuticals LLC 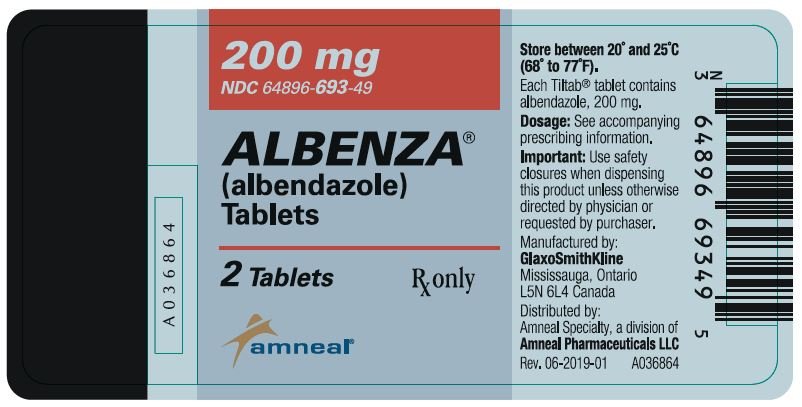 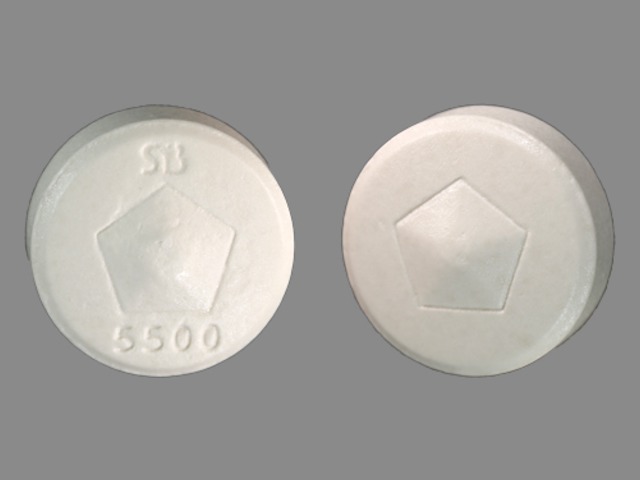