Methicillin-resistant Staphylococcus aureus (MRSA) infection is caused by a type of staph bacteria that's become resistant to many of the antibiotics used to treat ordinary staph infections.

Most MRSA infections occur in people who've been in hospitals or other health care settings, such as nursing homes and dialysis centers. When it occurs in these settings, it's known as health care-associated MRSA (HA-MRSA). HA-MRSA infections usually are associated with invasive procedures or devices, such as surgeries, intravenous tubing or artificial joints. HA-MRSA can spread by health care workers touching people with unclean hands or people touching unclean surfaces.

Another type of MRSA infection has occurred in the wider community — among healthy people. This form, community-associated MRSA (CA-MRSA), often begins as a painful skin boil. It's usually spread by skin-to-skin contact. At-risk populations include groups such as high school wrestlers, child care workers and people who live in crowded conditions.

These red bumps can quickly turn into deep, painful boils (abscesses) that require surgical draining. Sometimes the bacteria remain confined to the skin. But they can also burrow deep into the body, causing potentially life-threatening infections in bones, joints, surgical wounds, the bloodstream, heart valves and lungs.

Keep an eye on minor skin problems — pimples, insect bites, cuts and scrapes — especially in children. If wounds appear infected or are accompanied by a fever, see your doctor. 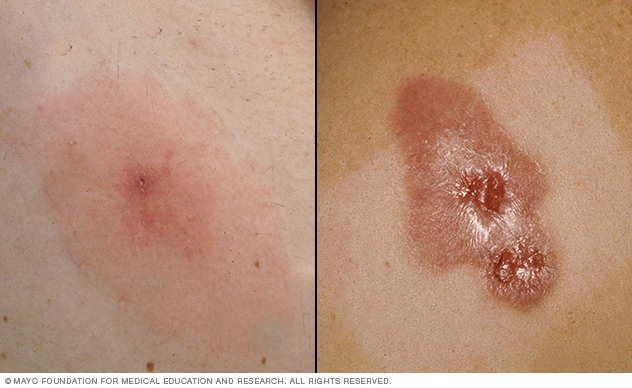 MRSA infections start out as small red bumps that can quickly turn into deep, painful abscesses.

Different varieties of Staphylococcus aureus bacteria, commonly called "staph," exist. Staph bacteria are normally found on the skin or in the nose of about one-third of the population. The bacteria are generally harmless unless they enter the body through a cut or other wound, and even then they usually cause only minor skin problems in healthy people.

According to the Centers for Disease Control and Prevention, around 5% of the population chronically carries the type of staph bacteria known as MRSA.

MRSA is the result of decades of often unnecessary antibiotic use. For years, antibiotics have been prescribed for colds, flu and other viral infections that don't respond to these drugs. Even when antibiotics are used appropriately, they contribute to the rise of drug-resistant bacteria because they don't destroy every germ they target. Bacteria live on an evolutionary fast track, so germs that survive treatment with one antibiotic soon learn to resist others.

Because hospital and community strains of MRSA generally occur in different settings, the risk factors for the two strains differ.

MRSA infections can resist the effects of many common antibiotics, so they're more difficult to treat. This can allow the infections to spread and sometimes become life-threatening.

MRSA infections may affect your:

In the hospital, people who are infected or colonized with MRSA often are placed in isolation as a measure to prevent the spread of MRSA. Visitors and health care workers caring for people in isolation may need to wear protective garments.

They also must follow strict hand hygiene procedures. For example, health care workers can help prevent HA-MRSA by washing their hands with soap and water or using hand sanitizer before and after each clinical appointment.

Hospital rooms, surfaces and equipment, as well as laundry items, need to be properly disinfected and cleaned regularly.

Doctors diagnose MRSA by checking a tissue sample or nasal secretions for signs of drug-resistant bacteria. The sample is sent to a lab where it's placed in a dish of nutrients that encourage bacterial growth.

But because it takes about 48 hours for the bacteria to grow, newer tests that can detect staph DNA in a matter of hours are now becoming more widely available.

Both health care-associated and community-associated strains of MRSA still respond to certain antibiotics.

In some cases, antibiotics may not be necessary. For example, doctors may drain a small, shallow boil (abscess) caused by MRSA rather than treat the infection with drugs.

During your physical exam, your doctor will closely examine any skin cuts you may have. He or she might take a sample of tissue or liquid from the cuts for testing.