Melanoma, the most serious type of skin cancer, develops in the cells (melanocytes) that produce melanin — the pigment that gives your skin its color. Melanoma can also form in your eyes and, rarely, inside your body, such as in your nose or throat.

The exact cause of all melanomas isn't clear, but exposure to ultraviolet (UV) radiation from sunlight or tanning lamps and beds increases your risk of developing melanoma. Limiting your exposure to UV radiation can help reduce your risk of melanoma.

The risk of melanoma seems to be increasing in people under 40, especially women. Knowing the warning signs of skin cancer can help ensure that cancerous changes are detected and treated before the cancer has spread. Melanoma can be treated successfully if it is detected early. 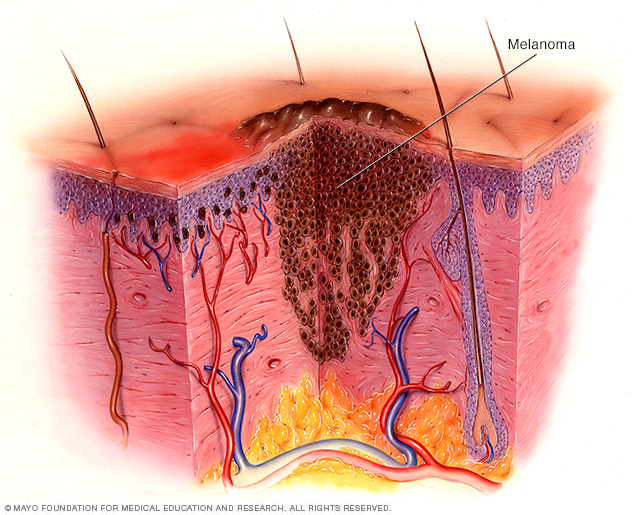 Melanoma is a form of skin cancer that begins in the cells (melanocytes) that control the pigment in your skin. This illustration shows melanoma cells extending from the surface of the skin into the deeper skin layers.

Melanomas can develop anywhere on your body. They most often develop in areas that have had exposure to the sun, such as your back, legs, arms and face.

Melanomas can also occur in areas that don't receive much sun exposure, such as the soles of your feet, palms of your hands and fingernail beds. These hidden melanomas are more common in people with darker skin.

The first melanoma signs and symptoms often are:

Melanoma doesn't always begin as a mole. It can also occur on otherwise normal-appearing skin.

Normal moles are generally a uniform color — such as tan, brown or black — with a distinct border separating the mole from your surrounding skin. They're oval or round and usually smaller than 1/4 inch (about 6 millimeters) in diameter — the size of a pencil eraser.

Most moles begin appearing in childhood and new moles may form until about age 40. By the time they are adults, most people have between 10 and 40 moles. Moles may change in appearance over time and some may even disappear with age.

Unusual moles that may indicate melanoma

To help you identify characteristics of unusual moles that may indicate melanomas or other skin cancers, think of the letters ABCDE:

Cancerous (malignant) moles vary greatly in appearance. Some may show all of the changes listed above, while others may have only one or two unusual characteristics.

Melanomas can also develop in areas of your body that have little or no exposure to the sun, such as the spaces between your toes and on your palms, soles, scalp or genitals. These are sometimes referred to as hidden melanomas because they occur in places most people wouldn't think to check. When melanoma occurs in people with darker skin, it's more likely to occur in a hidden area.

Make an appointment with your doctor if you notice any skin changes that seem unusual. 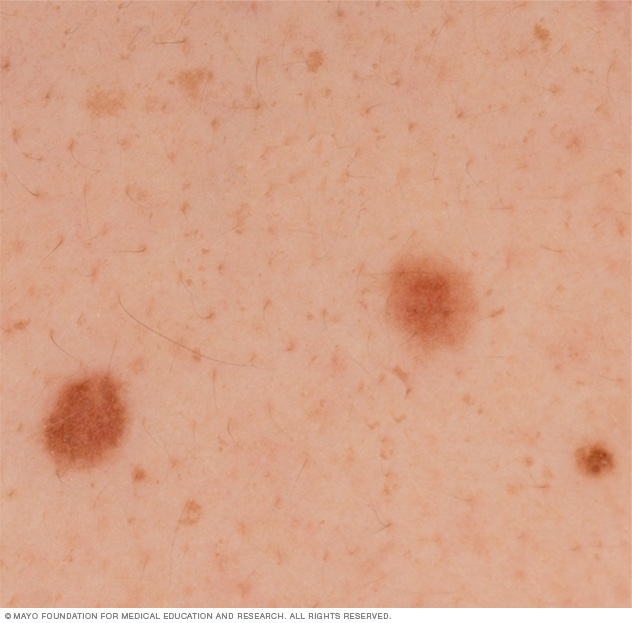 Moles are usually harmless. They may contain hairs or become raised or wrinkled. Talk to your doctor about any change in the color or size of a mole or if itching, pain, bleeding or inflammation develops. 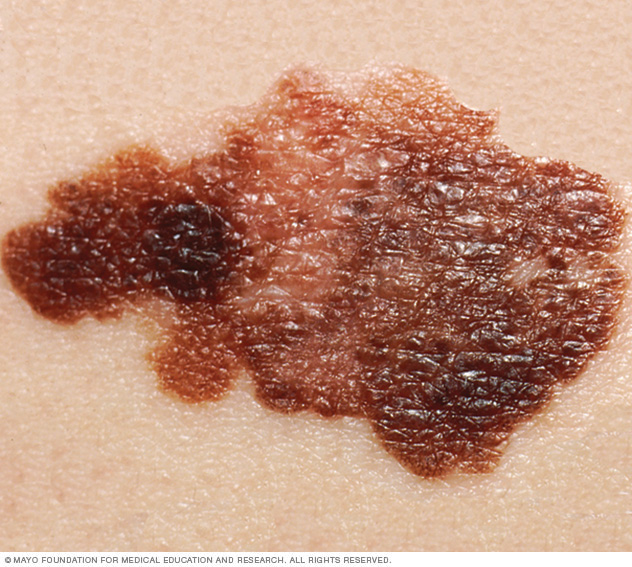 The first sign of melanoma is often a mole that changes size, shape or color. This melanoma shows color variations and an irregular border, both of which are melanoma warning signs.

Melanoma occurs when something goes wrong in the melanin-producing cells (melanocytes) that give color to your skin.

Normally, skin cells develop in a controlled and orderly way — healthy new cells push older cells toward your skin's surface, where they die and eventually fall off. But when some cells develop DNA damage, new cells may begin to grow out of control and can eventually form a mass of cancerous cells.

Just what damages DNA in skin cells and how this leads to melanoma isn't clear. It's likely that a combination of factors, including environmental and genetic factors, causes melanoma. Still, doctors believe exposure to ultraviolet (UV) radiation from the sun and from tanning lamps and beds is the leading cause of melanoma.

UV light doesn't cause all melanomas, especially those that occur in places on your body that don't receive exposure to sunlight. This indicates that other factors may contribute to your risk of melanoma.

Skin cancer begins in the cells that make up the outer layer (epidermis) of your skin. One type of skin cancer called basal cell carcinoma begins in the basal cells, which make skin cells that continuously push older cells toward the surface. As new cells move upward, they become flattened squamous cells, where a skin cancer called squamous cell carcinoma can occur. Melanoma, another type of skin cancer, arises in the pigment cells (melanocytes).

Factors that may increase your risk of melanoma include:

You can reduce your risk of melanoma and other types of skin cancer if you:

Tests and procedures used to diagnose melanoma include:

Determining the extent of the melanoma

If you receive a diagnosis of melanoma, the next step is to determine the extent (stage) of the cancer. To assign a stage to your melanoma, your doctor will:

Other factors may go into determining the risk that the cancer may spread (metastasize), including whether the skin over the area has formed an open sore (ulceration) and how many dividing cancer cells (mitoses) are found when looking under a microscope.

Melanoma is staged using the Roman numerals 0 through IV. At stage 0 and stage I, a melanoma is small and has a very successful treatment rate. But the higher the numeral, the lower the chances of a full recovery. By stage IV, the cancer has spread beyond your skin to other organs, such as your lungs or liver.

During an excisional biopsy, the doctor removes an entire lump or an entire area of abnormal skin, including a portion of normal skin. Stitches are generally used to close the biopsy site after this procedure. 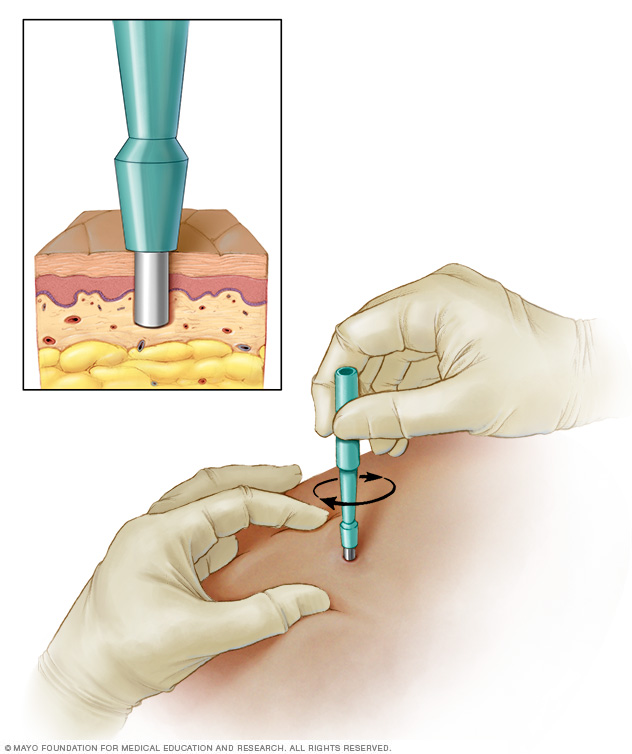 During a punch biopsy, your health care provider uses a special circular blade to remove deeper layers of skin for testing. Depending on the size, stitches may be necessary to close the wound.

The best treatment for your melanoma depends on the size and stage of cancer, your overall health, and your personal preferences.

Treatment for early-stage melanomas usually includes surgery to remove the melanoma. A very thin melanoma may be removed entirely during the biopsy and require no further treatment. Otherwise, your surgeon will remove the cancer as well as a border of normal skin and a layer of tissue beneath the skin. For people with early-stage melanomas, this may be the only treatment needed.

Treating melanomas that have spread beyond the skin

If melanoma has spread beyond the skin, treatment options may include:

A cancer diagnosis can change your life forever. Each person finds his or her own way of coping with the emotional and physical changes cancer brings. But when you're first diagnosed with cancer, sometimes it's difficult to know what to do next.

Here are some ideas to help you cope:

Because appointments can be brief, and because there's often a lot to discuss, it's a good idea to be well prepared for your appointment. Here's some information to help you get ready and know what to expect from your doctor.

Your time with your doctor is limited, so preparing a list of questions can help you make the most of your time together. List your questions from most important to least important, in case time runs out. For melanoma, some basic questions to ask your doctor include:

In addition to the questions that you've prepared to ask your doctor, don't hesitate to ask other questions during your appointment.