Hydrocephalus is the buildup of fluid in the cavities (ventricles) deep within the brain. The excess fluid increases the size of the ventricles and puts pressure on the brain.

Cerebrospinal fluid normally flows through the ventricles and bathes the brain and spinal column. But the pressure of too much cerebrospinal fluid associated with hydrocephalus can damage brain tissues and cause a range of impairments in brain function.

Hydrocephalus can happen at any age, but it occurs more frequently among infants and adults 60 and over. Surgical treatment for hydrocephalus can restore and maintain normal cerebrospinal fluid levels in the brain. Many different therapies are often required to manage symptoms or functional impairments resulting from hydrocephalus.

The signs and symptoms of hydrocephalus vary somewhat by age of onset.

Common signs and symptoms of hydrocephalus in infants include:

Changes in the head

Among toddlers and older children, signs and symptoms may include:

Common signs and symptoms in this age group include:

Among adults 60 years of age and older, the more common signs and symptoms of hydrocephalus are:

Seek emergency medical care for infants and toddlers experiencing these signs and symptoms:

Seek prompt medical attention for other signs or symptoms in any age group.

Because more than one condition can result in the problems associated with hydrocephalus, it's important to get a timely diagnosis and appropriate care.

Hydrocephalus is caused by an imbalance between how much cerebrospinal fluid is produced and how much is absorbed into the bloodstream.

Cerebrospinal fluid is produced by tissues lining the ventricles of the brain. It flows through the ventricles by way of interconnecting channels. The fluid eventually flows into spaces around the brain and spinal column. It's absorbed primarily by blood vessels in tissues near the base of the brain.

Cerebrospinal fluid plays an important role in brain function by:

Excess cerebrospinal fluid in the ventricles occurs for one of the following reasons: 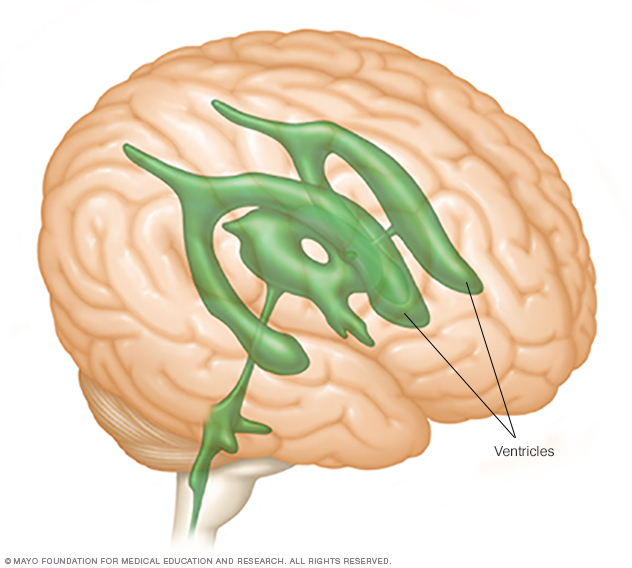 Your brain floats in a bath of cerebrospinal fluid. This fluid also fills large open structures, called ventricles, which lie deep inside your brain. The fluid-filled ventricles help keep the brain buoyant and cushioned.

In many cases, the exact event leading to hydrocephalus is unknown. However, a number of developmental or medical problems can contribute to or trigger hydrocephalus.

Hydrocephalus present at birth (congenital) or shortly after birth may occur because of any of the following:

Other factors that can contribute to hydrocephalus among any age group include:

Long-term complications of hydrocephalus can vary widely and are often difficult to predict. If hydrocephalus has progressed by the time of birth, it may result in significant intellectual, developmental and physical disabilities. Less severe cases, when treated appropriately, may have few, if any, serious complications.

Adults who have experienced a significant decline in memory or other thinking skills generally have poorer recoveries and persistent symptoms after treatment of hydrocephalus.

The severity of complications depends on:

A diagnosis of hydrocephalus is usually based on:

The type of neurological exam will depend on a person's age. The neurologist may ask questions and conduct relatively simple tests in the office to judge muscle condition, movement, well-being and how well the senses are functioning.

Imaging tests can help diagnose hydrocephalus and identify underlying causes of the symptoms. These tests may include:

One of two surgical treatments may be used to treat hydrocephalus.

The most common treatment for hydrocephalus is the surgical insertion of a drainage system, called a shunt. It consists of a long, flexible tube with a valve that keeps fluid from the brain flowing in the right direction and at the proper rate.

One end of the tubing is usually placed in one of the brain's ventricles. The tubing is then tunneled under the skin to another part of the body where the excess cerebrospinal fluid can be more easily absorbed — such as the abdomen or a chamber in the heart.

People who have hydrocephalus usually need a shunt system for the rest of their lives, and regular monitoring is required.

Endoscopic third ventriculostomy is a surgical procedure that can be used for some people. In the procedure, your surgeon uses a small video camera to have direct vision inside the brain. Your surgeon makes a hole in the bottom of one of the ventricles or between the ventricles to enable cerebrospinal fluid to flow out of the brain.

Both surgical procedures can result in complications. Shunt systems can stop draining cerebrospinal fluid or poorly regulate drainage because of mechanical malfunctions, blockage or infections. Complications of ventriculostomy include bleeding and infections.

Any failure requires prompt attention, surgical revisions or other interventions. Signs and symptoms of problems may include:

Some people with hydrocephalus, particularly children, may need additional treatment, depending on the severity of long-term complications of hydrocephalus.

A care team for children may include a:

Adults with more-severe complications also may require the services of occupational therapists, social workers, specialists in dementia care or other medical specialists. 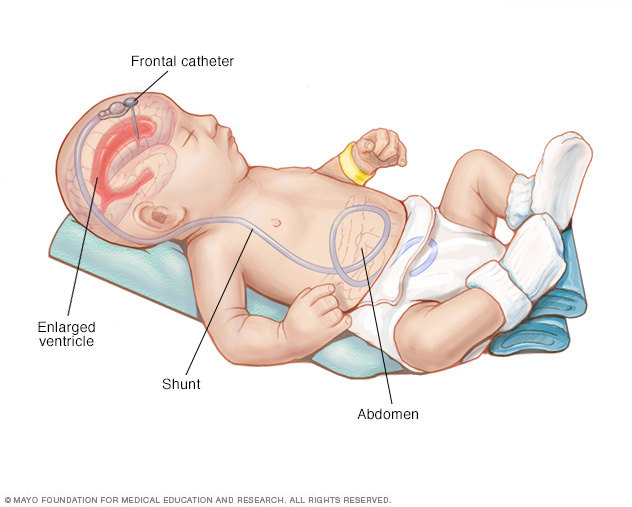 A shunt drains excess cerebrospinal fluid from the brain to another part of the body, such as the abdomen, where it can be more easily absorbed.

With the help of rehabilitative therapies and educational interventions, many people with hydrocephalus live with few limitations.

There are many resources available to provide emotional and medical support as you parent a child with hydrocephalus. Children with developmental problems due to hydrocephalus may be eligible for government-sponsored health care and other support services. Check with your state or county social services agency.

Hospitals and voluntary organizations serving people with disabilities are good resources for emotional and practical support, as are doctors and nurses. Ask these resources to help you connect with other families who are coping with hydrocephalus.

Should you be vaccinated against meningitis?

Ask your doctor if you or your child should receive a vaccine against meningitis, once a common cause of hydrocephalus. The Centers for Disease Control and Prevention recommends meningitis vaccination for preteen children and boosters for teenagers. It's also recommended for younger children and adults who may be at increased risk of meningitis for any of the following reasons:

The timing of diagnosing a child with hydrocephalus may depend on how severe the symptoms are, when problems first appear, and whether there were any significant risk factors during the pregnancy or delivery. In some cases, hydrocephalus may be diagnosed at birth or prior to birth.

It's important to take your child to all regularly scheduled well-baby visits. These visits are an opportunity for your child's doctor to monitor your child's development in key areas, including:

Questions you should be prepared to answer during regular checkups might include the following:

Preparing for other doctor visits

If you're seeing a doctor because of the recent onset of symptoms, you'll likely start by seeing your primary care doctor or your child's pediatrician. After an initial evaluation, your doctor may refer you to a doctor who specializes in the diagnosis and treatment of conditions that affect the brain and nervous system (neurologist).

Be prepared to answer the following questions about your symptoms or on your child's behalf: