CJD captured public attention in the 1990s when some people in the United Kingdom developed a form of the disease — variant CJD (vCJD) — after eating meat from diseased cattle. However, "classic" Creutzfeldt-Jakob disease hasn't been linked to contaminated beef. All types of CJD are serious, but very rare. Worldwide, about one to two cases of CJD are diagnosed per million people each year, most often in older adults.

Creutzfeldt-Jakob disease is marked by rapid mental deterioration, usually within a few months. Early signs and symptoms typically include:

As the disease progresses, mental symptoms worsen. Most people eventually fall into a coma. Heart failure, lung (respiratory) failure, pneumonia or other infections are generally the cause of death, which usually occurs within a year.

In people with the rarer vCJD, psychiatric symptoms may be more apparent in the beginning. In many cases, dementia — the loss of the ability to think, reason and remember — develops later in the illness. vCJD also affects people at a younger age and appears to last 12 to 14 months.

Creutzfeldt-Jakob disease and its variants belong to a broad group of human and animal diseases known as transmissible spongiform encephalopathies (TSEs). The name derives from the spongy holes, visible under a microscope, that develop in affected brain tissue.

The cause of Creutzfeldt-Jakob disease and other TSEs appears to be abnormal versions of a kind of protein called a prion. Normally these proteins are produced in our bodies and are harmless. But when they're misshapen, they become infectious and can harm normal biological processes.

How CJD is transmitted

The risk of CJD is low. The disease can't be spread through coughing or sneezing, touching, or sexual contact. CJD can develop in three ways: 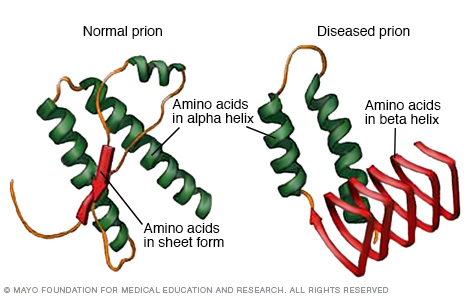 Prions are proteins that occur naturally in the brains of animals and people. Normally, the proteins are harmless, but when they're misshapen, they can cause devastating illnesses such as BSE disease in cattle and Creutzfeldt-Jakob disease in humans.

Most cases of Creutzfeldt-Jakob disease occur for unknown reasons, and no risk factors can be identified. However, a few factors seem to be associated with different kinds of CJD: 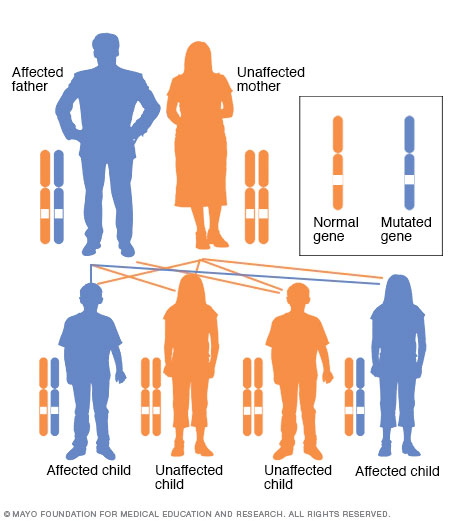 Creutzfeldt-Jakob disease greatly affects the brain and body. CJD usually progresses quickly. Over time, people with CJD withdraw from friends and family and eventually lose the ability to recognize or relate to them. They also lose the ability to care for themselves and many eventually slip into a coma. The disease is always fatal.

There's no known way to prevent sporadic Creutzfeldt-Jakob disease (CJD). If you have a family history of neurological disease, you may benefit from talking with a genetics counselor. He or she can help you sort through the risks associated with your situation.

Hospitals and other medical institutions follow clear policies to prevent iatrogenic CJD. These measures have included:

To help ensure the safety of the blood supply, people with a risk of exposure to CJD or vCJD aren't eligible to donate blood in the United States. This includes people who:

The U.K., as well as some other countries, also has certain restrictions regarding blood donations from people with a risk of exposure to CJD or vCJD.

The risk of getting vCJD in the United States remains very low. Only four cases have been reported in the U.S. According to the U.S. Centers for Disease Control and Prevention (CDC), strong evidence suggests that these cases were acquired in other countries outside of the U.S.

To date, there is no evidence that people can develop vCJD from consuming meat of animals infected with CWD prions. Nonetheless, the CDC recommends that hunters strongly consider having deer and elk tested before eating the meat in areas where CWD is known to be present. In addition, hunters should avoid shooting or handling meat from deer or elk that appear sick or are found dead.

Most countries have taken steps to prevent BSE-infected tissue from entering the food supply, including:

Only a brain biopsy or an exam of brain tissue after death (autopsy) can confirm the presence of Creutzfeldt-Jakob disease (CJD). But doctors often can make an accurate diagnosis based on your medical and personal history, a neurological exam, and certain diagnostic tests.

The exam is likely to reveal characteristic symptoms such as muscle twitching and spasms, abnormal reflexes, and coordination problems. People with may also have areas of blindness and changes in visual-spatial perception.

In addition, doctors commonly use these tests to help detect CJD:

No effective treatment exists for Creutzfeldt-Jakob disease or any of its variants. Many drugs have been tested and haven't shown benefits. For that reason, doctors focus on relieving pain and other symptoms and on making people with these diseases as comfortable as possible.

You're likely to start by seeing your family doctor or a general doctor. In some cases when you call for an appointment, you may be referred immediately to a brain specialist (neurologist).

For Creutzfeldt-Jakob disease, some basic questions to ask your doctor include:

Questions your doctor is likely to ask include: