These highlights do not include all the information needed to use SCENESSE .
See full prescribing information for SCENESSE.
Initial U.S. Approval: 2019

SCENESSE® is indicated to increase pain free light exposure in adult patients with a history of phototoxic reactions from erythropoietic protoporphyria (EPP).

SCENESSE should be administered by a health care professional. All healthcare professionals should be proficient in the
subcutaneous implantation procedure and have completed the training program provided by CLINUVEL prior to
administration of the SCENESSE implant [see Dosage and Administration (2.2)]. Additional information, including a
video, is available at http://www.clinuvel.com/US-HCP. The additional information has not been evaluated or approved by
the FDA.
A single SCENESSE implant is inserted subcutaneously above the anterior supra-iliac crest every 2 months.
Use the SFM Implantation Cannula to implant SCENESSE. Contact CLINUVEL INC. for other implantation devices that
have been determined by the manufacturer to be suitable for implantation of SCENESSE.
Maintain sun and light protection measures during treatment with SCENESSE to prevent phototoxic reactions related to
EPP.

Instructions for Implantation of SCENESSE

Insert a single SCENESSE implant (containing 16 mg of afamelanotide) subcutaneously above the anterior supra-iliac
crest.
Implant SCENESSE observing an aseptic technique. The following equipment is needed for the implant insertion:
• SCENESSE implant
• SFM Implantation Cannula; use of a device that has not been determined to be suitable could result in damage to
the SCENESSE implant [see Dosage and Administration (2.1)].
• Sterile gloves
• Local anesthetic, needle and syringe
• Blunt forceps suitable for removing the SCENESSE implant from the glass vial and placement of the SCENESSE
implant
• Sterile gauze, adhesive bandage, pressure bandage
Step 1
• Take the carton containing SCENESSE out of the refrigerator to allow the product to gradually warm up to
ambient temperature.
• Remove the seal and stopper from the glass vial containing SCENESSE. Remove the implant from the vial
using the blunt forceps under aseptic conditions and place the implant on a sterile gauze.

Step 2
Put the patient in a comfortable reclined supine position.
Identify the insertion site 3-4 cm above the anterior suprailiac
crest and disinfect the skin surface. 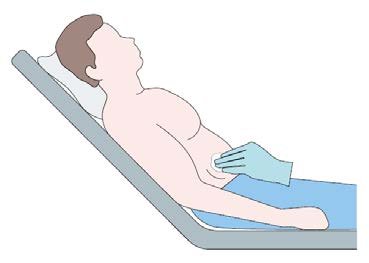 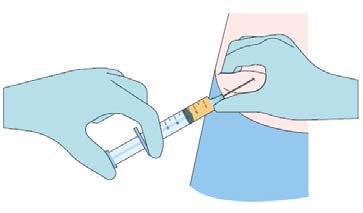 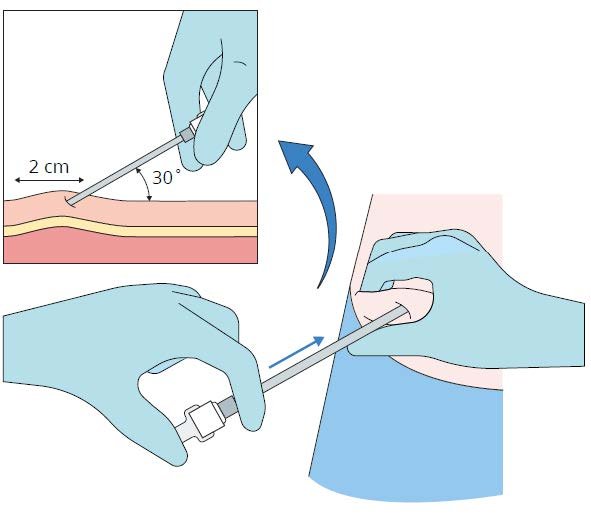 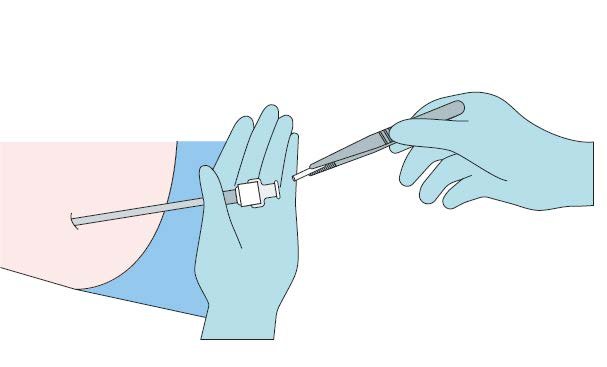 Step 6
Apply pressure to the site of the implant while removing the
stylet (obturator) and the cannula. Verify that no implant or
implant portion remains in the cannula. 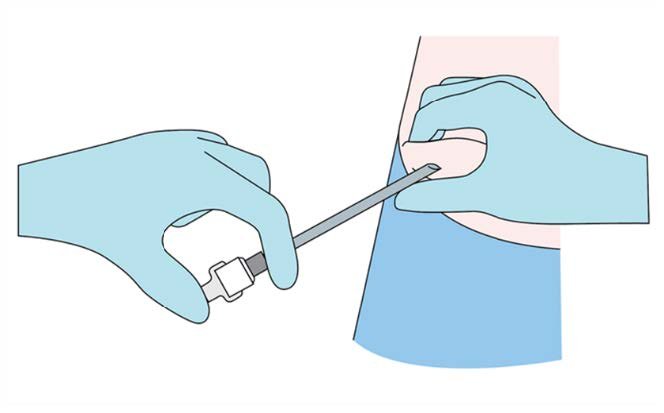 Step 7
Verify the correct insertion and placement of the implant by
palpating the skin overlying the implant. 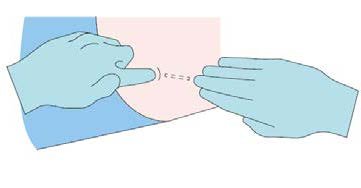 Step 8
Apply dressing to the insertion site. Leave dressing in place
for 24 hours. 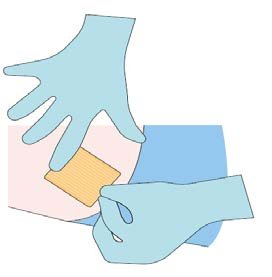 Step 9
Monitor the patient for 30 minutes after the implant
administration. 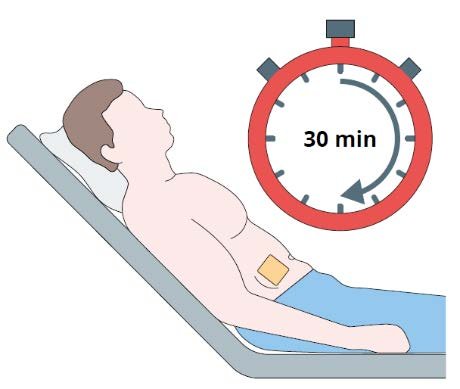 Implant: 16 mg of afamelanotide as a solid white to off-white, bioresorbable, sterile rod approximately 1.7 cm in length
and 1.45 mm in diameter.

SCENESSE may lead to generalized increased skin pigmentation and darkening of pre-existing nevi and ephelides because
of its pharmacologic effect. A full body skin examination (twice yearly) is recommended to monitor pre-existing and new
skin pigmentary lesions.

Because clinical trials are conducted under widely varying conditions, adverse reaction rates observed in the clinical trials
of a drug cannot be directly compared to rates in the clinical trials of another drug and may not reflect the rates observed in
practice.
The safety of SCENESSE was evaluated in 3 randomized, multicenter, prospective, vehicle controlled clinical trials (Study
CUV029, Study CUV030, and Study CUV039) involving 244 adult subjects with erythropoietic protoporphyria (EPP)
without significant liver involvement. Subjects received subcutaneous Scenesse Implants containing 16 mg of
afamelanotide every 2 months. A total of 125 subjects received SCENESSE and 119 subjects received vehicle implants.
Table 1 summarizes the adverse reactions that occurred in more than 2% of subjects. 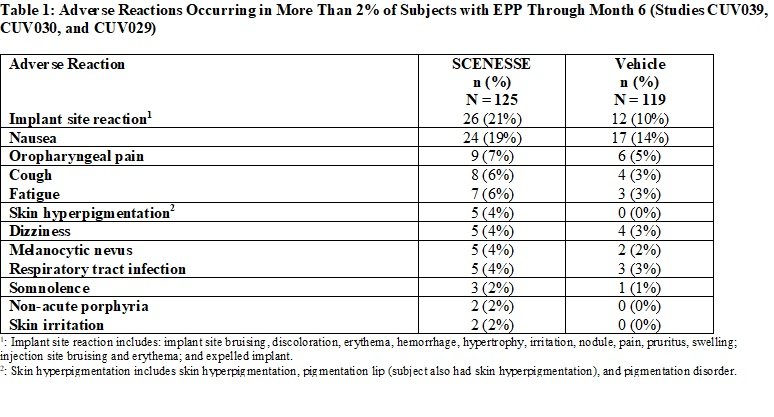 Risk Summary
There are no data on the presence of afamelanotide or any of its metabolites in human or animal milk, the effects on the
breastfed infant, or the effect on milk production. The developmental and health benefits of breastfeeding should be
considered along with the mother’s clinical need for SCENESSE and any potential adverse effects on the breastfed infant
from SCENESSE or from the underlying maternal condition.

The safety and effectiveness of SCENESSE have not been established in pediatric patients.

There were 10 subjects 65 years old and over in the clinical studies for EPP [see Clinical Studies (14)]. Of the 125
subjects treated with SCENESSE in these studies, 4 (3%) were 65 years of age and older. Clinical studies of SCENESSE
did not include sufficient numbers of subjects aged 65 and over to determine whether they respond differently from
younger subjects. Other reported clinical experience has not identified differences in responses between the elderly and
younger patients.

SCENESSE (afamelanotide) implant is a controlled-release dosage form for subcutaneous administration. Afamelanotide is
a melanocortin 1 receptor (MC1-R) agonist. The active ingredient afamelanotide acetate is a synthetic peptide containing
13 amino acids with molecular formula C78H111N21O19 •xC2H4O2 (3 ≤ x ≤ 4). The molecular weight of afamelanotide is
1646.85 (anhydrous free base). Afamelanotide acetate has the following structure:
Ac-Ser-Tyr-Ser-Nle-Glu-His-(D)Phe-Arg-Trp-Gly-Lys-Pro-Val-NH2• xCH3COOH.
Afamelanotide is a white to off-white powder, freely soluble in water. Each SCENESSE implant contains 16 mg of
afamelanotide (equivalent to 18 mg of afamelanotide acetate), and 15.3-19.5 mg of poly (DL-lactide-co-glycolide).
SCENESSE implant is a single, solid white to off-white, bioresorbable and sterile rod approximately 1.7 cm in length and
1.45 mm in diameter. The implant core comprises of the drug substance admixed with a poly (DL-lactide-co-glycolide)
bioresorbable copolymer.

Afamelanotide increases production of eumelanin in the skin independently of exposure to sunlight or artificial UV light
sources.

The pharmacokinetics of afamelanotide following administration of a single subcutaneous implant of SCENESSE were evaluated in 12 healthy adults. High variability was observed in the plasma concentrations of afamelanotide and for most subjects (9 out of 12), the last measurable afamelanotide concentration was at 96 hours post-dose. The mean ± SD C max and AUC 0-inf were 3.7 ± 1.3 ng/mL and 138.9 ± 42.6 hr*ng/mL, respectively.

The apparent half-life of afamelanotide is approximately 15 hr when administered subcutaneously in a controlled release implant.

Afamelanotide may undergo hydrolysis. However, its metabolic profile has not been fully characterized.

Carcinogenicity studies have not been conducted with SCENESSE.
Afamelanotide was negative in the Ames test, in vitro mouse lymphoma assay, and in vivo mouse bone marrow
micronucleus assay.
No effects on male or female fertility and reproductive performance were observed in rats at subcutaneous doses up to 20
mg/kg/day afamelanotide (12 times the MRHD, based on a body surface area comparison).

SCENESSE (afamelanotide) implant, 16 mg, for subcutaneous administration (NDC 73372-0116-1) is supplied in a Type I
amber glass vial sealed with a PTFE coated rubber stopper. Each vial contains one afamelanotide implant and is packaged
individually in a cardboard box. SCENESSE implant is a solid white to off-white, bioresorbable and sterile rod
approximately 1.7 cm in length and 1.45 mm in diameter.
Store in a refrigerator at 2°C – 8°C (36°F-46°F). Protect from light.
Scenesse Implants are not supplied with an implantation device for subcutaneous administration [see Dosage and
Administration (2)].

Re: Temporary changes to approved packaging and labeling of SCENESSE® (afamelanotide) implant.

CLINUVEL, INC. is issuing this letter to inform you of temporary changes to the approved packaging and labeling of SCENESSE®. This means that the appearance of SCENESSE® packaging will differ from that approved by the United States Food and Drug Administration (FDA). To meet U.S. demand, CLINUVEL, INC. is releasing batches ML1803 and ML1901 with the temporary changes to the packaging and labelling with the knowledge of the FDA. A summary of these changes is outlined below.

CLINUVEL will communicate updates to you on its ability to provide SCENESSE® in its final U.S. approved packaging.

CLINUVEL, INC. is the holder of the approved New Drug Application (NDA) for the medication SCENESSE® (afamelanotide) implant. SCENESSE® was approved by the U.S. FDA in October 2019 to increase pain-free light exposure in adult patients with a history of phototoxicity reactions from erythropoietic protoporphyria (EPP).

Summary of the temporary changes to packaging and labeling of SCENESSE®

SCENESSE® will be supplied in a single vial contained within a clear plastic pouch (transparent, zip-top bag), accompanied with the U.S. approved Prescribing Information, rather than in a cardboard carton. Both the pouch and label will feature the following information that is included in the approved label

Details on the contents of the packaging and ingredients:

NDC number
The statement “See Prescribing Information for dosage and administration information”
The statement “Rx only; for subcutaneous use only”
The lot number and expiration date of the SCENESSE® implant
Storage details
Manufacturer’s name

The vial should not be removed from the plastic pouch until the product is ready to be administered to a patient.

SCENESSE® is only available to healthcare professionals trained to administer SCENESSE® and should only be administered to adult patients with a confirmed diagnosis of EPP.

SCENESSE® is only available by direct order from CLINUVEL and cannot be obtained through third party distributors or wholesalers.

A copy of the full prescribing information for SCENESSE® has been appended to this letter.

Health Care Providers are expected to report all adverse events experienced by EPP patients receiving SCENESSE® to CLINUVEL via email at safety@clinuvel.com or by calling CLINUVEL, INC. on 1(650) 733 2827. Adverse events or quality problems experienced with the use of this product may also be reported to the FDA’s MedWatch Adverse Event Reporting Program either online, by regular mail, or by fax: