Salicylic Acid is the 2-hydroxy derivative of benzoic acid having the following structure: 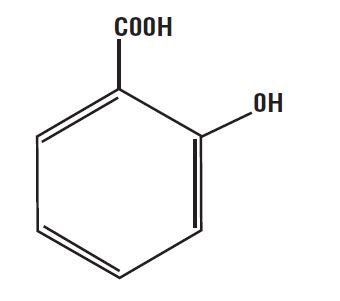 Salicylic Acid has been shown to produce desquamation of the horny layer of skin while not effecting qualitative or quantitative changes in the structure of the viable epidermis. The mechanism of action has been attributed to a dissolution of intercellular cement substance. In a study of the percutaneous absorption of Salicylic Acid in a 6% Salicylic Acid gel in four patients with extensive active psoriasis, Taylor and Halprin showed that the peak serum salicylate levels never exceeded 5 mg/100 ml even though more than 60% of the applied Salicylic Acid was absorbed. Systemic toxic reactions are usually associated with much higher serum levels (30 to 40 mg/100 ml). Peak serum levels occurred within five hours of the topical application under occlusion. The sites were occluded for 10 hours over the entire body surface below the neck. Since salicylates are distributed in the extracellular space, patients with a contracted extracellular space due to dehydration or diuretics have higher salicylate levels than those with a normal extracellular space. (See PRECAUTIONS.)

The major metabolites identified in the urine after topical administration are salicyluric acid (52%), salicylate glucuronides (42%) and free Salicylic Acid (6%). The urinary metabolites after percutaneous absorption differ from those after oral salicylate administration; those derived from percutaneous absorption contain more salicylate glucuronides and less salicyluric and Salicylic Acid. Almost 95% of a single dose of salicylate is excreted within 24 hours of its entrance into the extracellular space. Fifty to eighty percent of salicylate is protein bound to albumin. Salicylates compete with the binding of several drugs and can modify the action of these drugs. By similar competitive mechanisms other drugs can influence the serum levels of salicylate. (See PRECAUTIONS.)

For Dermatologic Use: Salicylic Acid 6% is a topical aid in the removal of excessive keratin in hyperkeratotic skin disorders including verrucae, and the various ichthyoses (vulgaris, sex-linked and lamellar), keratosis palmaris and plantaris keratosis pilaris, pityriasis rubra pilaris, and psoriasis (including body, scalp, palms and soles).

For Podiatric Use: Salicylic Acid 6% is a topical aid in the removal of excessive keratin on dorsal and plantar hyperkeratotic lesions. Topical preparations of 6% Salicylic Acid have been reported to be useful adjunctive therapy for verrucae plantares.

Salicylic Acid 6% should not be used in children under 2 years of age.

Prolonged use over large areas, especially in children and those patients with significant renal or hepatic impairment could result in salicylism. Concomitant use of other drugs which may contribute to elevated serum salicylate levels should be avoided where the potential for toxicity is present. In children under 12 years of age and those patients with renal or hepatic impairment, the area to be treated should be limited and the patient monitored closely for signs of salicylate toxicity: nausea, vomiting, dizziness, loss of hearing, tinnitus, lethargy, hyperpnea, diarrhea, and psychic disturbances. In the event of Salicylic Acid toxicity, the use of Salicylic Acid 6% should be discontinued. Fluids should be administered to promote urinary excretion. Treatment with sodium bicarbonate (oral or intravenous) should be instituted as appropriate.

Patients should be cautioned against the use of oral aspirin and other salicylate containing medications, such as sports injury creams, to avoid additional excessive exposure to Salicylic Acid.

Where needed, aspirin should be replaced by an alternative non-steroidal anti-inflammatory agent that is not salicylate based.

Patients should be advised not to apply occlusive dressings, clothing or other occlusive topical products such as petrolatum-based ointments to prevent excessive systemic exposure to Salicylic Acid. Excessive application of the product other than what is needed to cover the affected area will not result in a more rapid therapeutic benefit.

Due to potential risk of developing Reye's syndrome, salicylate products should not be used in children and teenagers with varicella or influenza, unless directed by physician.

FOR EXTERNAL USE ONLY. Avoid contact with eyes and other mucous membranes.

The following interactions are from a published review and include reports concerning both oral and topical salicylate administration. The relationship of these interactions to the use of Salicylic Acid 6% is not known.

Pregnancy: Category C. Salicylic Acid has been shown to be teratogenic in rats and monkeys. It is difficult to extrapolate from oral doses of acetylSalicylic Acid used in these studies to topical administration as the oral dose to monkeys may represent six times the maximal daily human dose of Salicylic Acid when applied topically over a large body surface. There are no adequate and well-controlled studies in pregnant women. Salicylic Acid 6% should be used during pregnancy only if the potential benefit justifies the potential risk to the fetus.

Nursing Mothers: Because of the potential for serious adverse reactions in nursing infants from the mother's use of Salicylic Acid 6%, a decision should be made whether to discontinue nursing or to discontinue the drug, taking into account the importance of the drug to the mother. If used by nursing mothers, it should not be used on the chest area to avoid accidental contamination of the child.

Carcinogenesis, Mutagenesis, Impairment of Fertility: No data are available concerning potential carcinogenic or reproductive effects of Salicylic Acid 6%. It has been shown to lack mutagenic potential in the Ames test.

Excessive erythema and scaling conceivably could result from use on open skin lesions. Call your physician for medical advice about side effects.

The preferable method of use is to apply Salicylic Acid 6% thoroughly to the affected area and to cover the treated area at night after washing and before retiring. Preferably, the skin should be hydrated for a least five minutes prior to application. The medication is washed off in the morning and if excessive drying and/or irritation is observed, a bland cream or lotion may be applied. Once clearing is apparent, the occasional use of Salicylic Acid 6% will usually maintain the remission. In those areas where occlusion is difficult or impossible, application may be made more frequently; hydration by wet packs or baths prior to application apparently enhances the effect. (See WARNINGS.) Unless hands are being treated, hands should be rinsed thoroughly after application. Excessive repeated application of Salicylic Acid 6% will not necessarily increase its therapeutic benefit, but could result in increased local intolerance and systemic adverse effects such as salicylism. 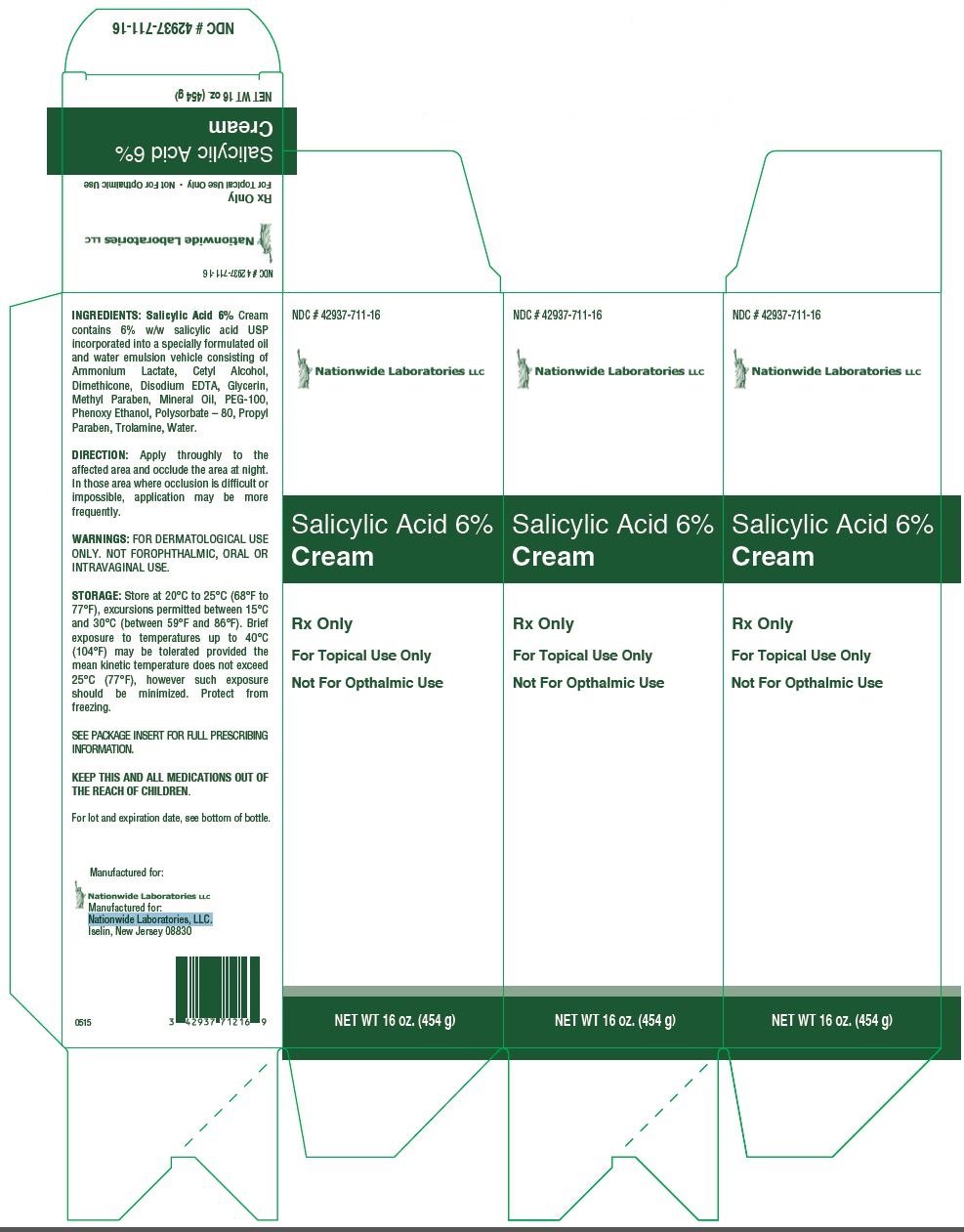