FOR USE IN NERVE AGENT POISONING ONLY

A Sterile Solution For Intramuscular Use Only

Each prefilled auto-injector provides a dose of the antidote, Pralidoxime Chloride in a self-contained unit, specially designed for automatic self- or buddy-administration by military personnel. Pralidoxime in the auto-injector may also be administered by qualified civilian emergency responders who have had adequate training in the on-site recognition and treatment of nerve agent intoxication in the event of an accidental release of nerve agent. The recommended procedure (see DOSAGE AND ADMINISTRATION) is to inject the contents of the auto-injector into the muscles of an outer thigh.

After an auto-injector has been activated, the empty container should be disposed of properly (see DOSAGE AND ADMINISTRATION), it cannot be refilled nor can the protruding needle be retracted.

When activated, each auto-injector dispenses 600 mg of Pralidoxime Chloride in 2 mL of a sterile solution containing 20 mg/mL benzyl alcohol, 11.26 mg/mL glycine in Water for Injection, USP. The pH is adjusted with hydrochloric acid. The pH range is 2.0-3.0. The product is pyrogen free.

Pralidoxime Chloride is a cholinesterase reactivator.

Pralidoxime Chloride occurs as an odorless, white, nonhygroscopic, crystalline powder which is soluble in water to the extent of 1 g in less than 1 mL. Stable in air, it melts between 215°C and 225°C, with decomposition.

The specific activity of the drug resides in the 2-formyl-1 methylpyridinium ion and is independent of the particular salt employed. The chloride is preferred because of physiologic compatibility, excellent water solubility at all temperatures, and high potency per gram, due to its low (173) molecular weight.

Pralidoxime Chloride is a cholinesterase reactivator.

The principal action of pralidoxime is to reactivate cholinesterase (mainly outside of the central nervous system) which has been inactivated by phosphorylation due to an organophosphate pesticide or related compound. The destruction of accumulated acetylcholine can then proceed and neuromuscular junctions will again function normally. Pralidoxime also slows the process of "aging" of phosphorylated cholinesterase to a non-reactivatable form, and detoxifies certain organophosphates by direct chemical reaction. The drug has its most critical effect in relieving paralysis of the muscles of respiration. Because pralidoxime is less effective in relieving depression of the respiratory center, atropine is always required concomitantly to block the effect of accumulated acetylcholine at this site. Pralidoxime relieves muscarinic signs and symptoms, salivation, bronchospasm, etc., but this action is relatively unimportant since atropine is adequate for this purpose.

Pralidoxime is distributed throughout the extracellular water, it is not bound to plasma protein. The drug is rapidly excreted in the urine partly unchanged, and partly as a metabolite produced by the liver. Consequently, pralidoxime is relatively short acting and repeated doses may be needed, especially where there is any evidence of continuing absorption of the poison.

It has been reported that the supplemental use of oxime cholinesterase reactivators (such as pralidoxime) reduces the incidence and severity of developmental defects in chick embryos exposed to such known teratogens as parathion, bidrin, carbachol and neostigmine. This protective effect of the oximes was shown to be dose related.

Indications and Usage for Pralidoxime Chloride

This auto-injector for Pralidoxime Chloride is specifically indicated for intramuscular use as an adjunct to atropine in the treatment of poisoning by nerve agents having anticholinesterase activity.

The Pralidoxime Chloride auto-injector is contraindicated in patients who are hypersensitive to any component of the product.

Pralidoxime is not effective in the treatment of poisoning due to phosphorus, inorganic phosphates or organophosphates not having anticholinesterase activity.

Pralidoxime has been very well tolerated in most cases, but it must be remembered that the desperate condition of the organophosphate-poisoned patient will generally mask such minor signs and symptoms as have been noted in normal subjects.

Because pralidoxime is excreted in the urine, a decrease in renal function will result in increased blood levels of the drug. Thus, the dosage of pralidoxime should be reduced in the presence of renal insufficiency.

The Pralidoxime Chloride auto-injector should be self- or buddy-administered by military personnel or administered by qualified civilian emergency responders only after the following events have occurred:

-
individual has donned his mask subsequent to recognizing the existence of a chemical agent hazard in his area
-
some or all of the symptoms of nerve agent poisoning cited below are present:
unexplained runny nose
tightness of chest with difficulty in breathing
pinpointed pupils of the eye resulting in blurred vision
drooling, excessive sweating
nausea, vomiting, and abdominal cramps
involuntary urination and defecation
jerking, twitching, and staggering
headache, drowsiness, coma, convulsions
stoppage of breathing

Appropriate steps must be taken to insure that personnel equipped with auto-injectors understand their indications and use including review of symptoms of poisoning and operation of the auto-injector.

Treatment of organophosphate poisoning should be instituted without waiting for the results of laboratory tests. Red blood cell, plasma cholinesterase, and urinary paranitrophenol measurements (in the case of parathion exposure) may be helpful in confirming the diagnosis and following the course of the illness. A reduction in red blood cell cholinesterase concentration to below 50% of normal has been seen only with organophosphate ester poisoning.

When atropine and pralidoxime are used together, the signs of atropinization (flushing, mydriasis, tachycardia, dryness of the mouth and nose) may occur earlier than might be expected when atropine is used alone. This is especially true if the total dose of atropine has been large and the administration of pralidoxime has been delayed.2, 3, 4

The following precautions should be kept in mind in the treatment of anticholesterinase poisoning, although they do not bear directly on the use of pralidoxime; since barbiturates are potentiated by the anticholinesterases, they should be used cautiously in the treatment of convulsions; morphine, theophylline, aminophylline, succinylcholine, reser-pine, and phenothiazine-type tranquilizers should be avoided in patients with organophosphate poisoning.

Since the Pralidoxime Chloride auto-injector is indicated for short-term emergency use only, no investigations of its potential for carcinogenesis, mutagenesis, or impairment of fertility have been conducted by the manufacturer, or reported in the literature.

Forty to 60 minutes after intramuscular injection, mild to moderate pain may be experienced at the site of injection.

Pralidoxime may cause blurred vision, diplopia and impaired accommodation, dizziness, headache, drowsiness, nausea, tachycardia, increased systolic and diastolic blood pressure, hyperventilation, and muscular weakness when given parenterally to normal volunteers who have not been exposed to anticholinesterase poisons. In patients it is very difficult to differentiate the toxic effects produced by atropine or the organophosphate compounds from those of the drug.

When atropine and pralidoxime are used together, the signs of atropinization may occur earlier than might be expected when atropine is used alone. This is especially true if the total dose of atropine has been large and the administration of pralidoxime has been delayed.2, 3, 4 Excitement and manic behavior immediately following recovery of consciousness have been reported in several cases. However, similar behavior has occurred in cases of organophosphate poisoning that were not treated with pralidoxime.3, 5, 6

Pralidoxime Chloride is not subject to abuse and possesses no known potential for dependence.

Observed in normal subjects only: dizziness, blurred vision, diplopia, headache, impaired accommodation, nausea, slight tachycardia. In therapy it has been difficult to differentiate side effects due to the drug from those due to the effects of the poison.

Artificial respiration and other supportive therapy should be administered as needed.

For optimal reactivation of organophosphate-inhibited cholinesterase, atropine and pralidoxime should be administered as soon as possible after exposure. Depending on the severity of symptoms, immediately administer one atropine-containing auto-injector, followed by one pralidoxime-containing auto-injector. Atropine must be given first until its effects become apparent and only then should pralidoxime be administered. If nerve agent symptoms are still present after 15 minutes, repeat injections. If symptoms still exist after an additional 15 minutes, repeat injections for a third time. If after the third set of injections, symptoms remain, do not give any more antidotes but seek medical help.

When, as described above, auto-injector use is indicated, proceed as follows:

Initial measures should include removal of secretions, maintenance of a patent airway and, if necessary, artificial ventilation. Atropine should not be used until cyanosis has been overcome since atropine produces ventricular fibrillations in the presence of hypoxia. Morphine, theophylline, aminophylline, or succincylcholine are contraindicated. Tranquilizers of the reserpine or phenothiazine type are to be avoided.

"Pralidoxime is most effective if administered immediately after poisoning. Generally, little is accomplished if the drug is given more than 36 hours after termination of exposure. When the poison has been ingested, however, exposure may continue for some time due to slow absorption from the lower bowel, and fatal relapses have been reported after initial improvement. Continued administration for several days may be useful in such patients. Close supervision of the patient is indicated for at least 48 to 72 hours. If dermal exposure has occurred, clothing should be removed and the hair and skin washed thoroughly with sodium bicarbonate or alcohol as soon as possible. Diazepam may be given cautiously if convulsions are not controlled by atropine."7

IMPORTANT: PHYSICIANS AND/OR OTHER MEDICAL PERSONNEL ASSISTING EVACUATED VICTIMS OF NERVE AGENTS, SHOULD AVOID EXPOSING THEMSELVES TO CONTAMINATION BY THE VICTIMS' CLOTHING.

How is Pralidoxime Chloride Supplied

Pralidoxime Chloride is supplied in aqueous solution prefilled in the auto-injector (600 mg, 2 mL) for military use and for use by qualified civilian emergency responders. Auto-injectors are supplied through the Directorate of Medical Materiel, Defense Supply Center Philadelphia or other analogous local, state or federal agency.

When activated, each auto-injector dispenses 600 mg of Pralidoxime Chloride in 2 mL of a sterile solution containing 20 mg/mL benzyl alcohol, 11.26 mg/mL glycine in Water for Injection, USP. The pH is adjusted with hydrochloric acid. The pH is 2.0-3.0 The product is pyrogen free.

FOR USE IN NERVE AGENT POISONING ONLY

Sterile solution for intramuscular use only

Each container dispenses 600mg of Pralidoxime Chloride when activated.

Water for Injection, USP. The pH is adjusted with hydrochloric acid.

A subsidiary of King Pharmaceuticals®, Inc 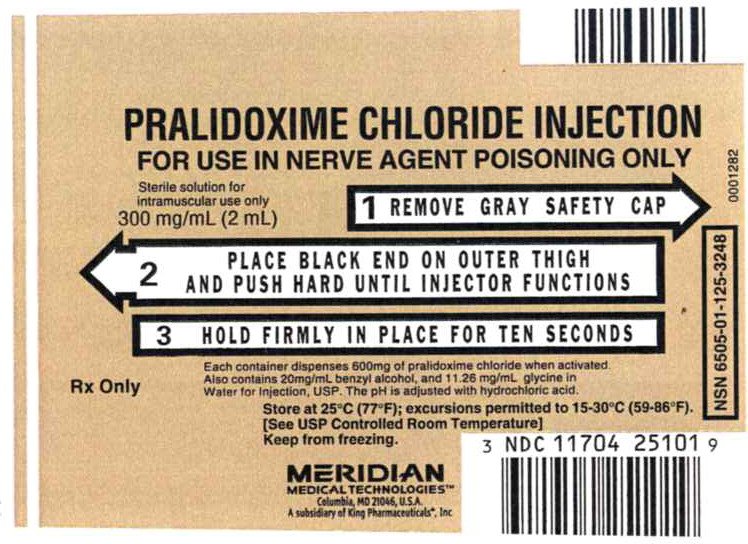