Expand
WARNING: ASTHMA EXACERBATION WITH NEBULIZATION and DEPLETION OF TRACE METALS DURING THERAPY

Zn-DTPA is indicated for treatment of individuals with known or suspected internal contamination with plutonium, americium, or curium to increase the rates of elimination.

Administer Ca-DTPA as the initial dose during the first 24 hours after internal contamination. Ca-DTPA is more effective than Zn-DTPA during this time period (see Ca-DTPA labeling). If Ca-DTPA is not available, use Zn-DTPA as initial therapy. On the next day, if additional chelation therapy is indicated, begin daily treatment with Zn-DTPA. If Zn-DTPA is not available, chelation therapy may continue with Ca-DTPA and concomitant mineral supplements containing zinc should be given (see Ca-DTPA labeling).

Do not administer more than one dose per 24 hour period.

If Ca-DTPA is not available during the first 24 hours:

After the first 24 hours, continue chelation therapy with Zn-DTPA:

No dose adjustment is needed. However, renal impairment may reduce the rate at which chelators remove radiocontaminants from the body. In heavily contaminated patients with renal impairment, dialysis may be used to increase the rate of elimination. High efficiency high flux dialysis is recommended. Because dialysis fluid will become radioactive, radiation precautions must be taken to protect personnel, other patients, and the general public.

If internal contamination with radiocontaminants other than plutonium, americium, or curium, or unknown radiocontaminants is suspected, additional therapies may be needed (e.g., Prussian blue, potassium iodide).

In individuals whose internal contamination is only by inhalation, Zn-DTPA can be administered by nebulized inhalation as an alternative route of administration.

Dilute Zn-DTPA for nebulization at a 1:1 ratio with sterile water or saline. After nebulization, encourage patients to avoid swallowing any expectorant. Some individuals may experience respiratory adverse events after inhalation therapy. [See Warnings and Precautions (5.1)] The safety and effectiveness of the nebulized route of administration have not been established in the pediatric population.

The safety and effectiveness of the intramuscular route of injection have not been established.

To establish an elimination curve, obtain a quantitative baseline estimate of the total internalized transuranium element(s) and measures of elimination of radioactivity by appropriate whole-body counting, by bioassay (e.g., biodosimetry), or fecal/urine sample whenever possible.

Zn-DTPA treatment may lead to depletion of body stores of endogenous metals (e.g. magnesium, manganese). The risk for depletion increases when Zn-DTPA is administered over several months. Monitor serum zinc levels, electrolytes and blood cell counts during Ca-DTPA or Zn-DTPA therapy. Give mineral or vitamin plus mineral supplements as appropriate. [See Dosage and Administration (2.4)]

Radioactive metals are known to be excreted in the urine, feces, and breast milk. In individuals with recent internal contamination with plutonium, americium, or curium, Zn-DTPA treatment increases excretion of radioactivity in the urine. Take appropriate safety measures to minimize contamination of others. [See Patient Counseling Information (17)]

Adequate and well-controlled drug-drug interaction studies in humans were not identified in the literature. When an individual is contaminated with multiple radiocontaminants, or when the radiocontaminants are unknown, additional therapies may be needed (e.g., Prussian blue, potassium iodide).

There are no adequate and well-controlled studies of Zn-DTPA use in pregnant women. Chelation treatment of pregnant women should begin and continue with Zn-DTPA. Reproduction studies have been performed in pregnant mice at doses up to 31 times (11.5 mmol/kg) the recommended daily human dose and have revealed no evidence of impaired fertility or harm to the fetus due to Zn-DTPA. There was a slight reduction in the average birth weight. Because animal reproduction studies are not always predictive of human response, this drug should be used during pregnancy only if clearly needed.

The safety and effectiveness of Zn-DTPA were established in the adult population and efficacy was extrapolated to the pediatric population for the intravenous route based on the comparability of pathophysiologic mechanisms. The dose is based on body size adjustment for an intravenous drug that is renally cleared [See Dosage and Administration (2.1)]. The safety and effectiveness of the nebulized route of administration have not been established in the pediatric population.

Overdose with Zn-DTPA has not been reported.

Pentetate zinc trisodium injection contains the sodium salt of zinc diethylenetriaminepentaacetate. Pentetate zinc trisodium is also known as trisodium zinc diethylenetriaminepentaacetate and is commonly referred to as Zn-DTPA. It has a molecular formula of Na3ZnC14H18N3O10 and a molecular weight of 522.7 Daltons. It is represented by the following structural formula: 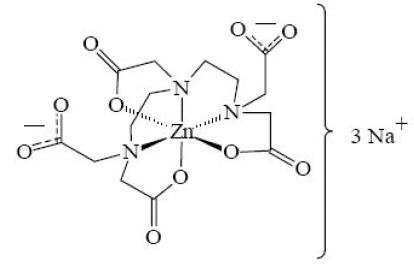 Zn-DTPA is supplied as a clear, colorless, hyperosmolar (1260 mOsmol/kg) solution in a colorless ampoule containing 5 mL. The ampoule contents are sterile, non-pyrogenic and suitable for intravenous administration. Each mL of solution contains the equivalent of 200 mg Pentetate zinc trisodium (obtained from 150.51 mg pentetic acid, 31.14 mg zinc oxide and NaOH) and water for injection, USP. The pH of the solution is adjusted with NaOH and is between 6.5-7.5.

Zn-DTPA forms stable chelates with metal ions by exchanging zinc for a metal of greater binding capacity. The radioactive chelates are then excreted by glomerular filtration into the urine. In animal studies, Zn-DTPA forms less stable chelates with uranium and neptunium in vivo resulting in deposition of these elements in tissues including the bone. Zn-DTPA treatments are not expected to be effective for uranium and neptunium. Radioactive iodine is not bound by DTPA.

In a study of rodents internally contaminated with plutonium, the rate of plutonium elimination was measured after treatment with Ca-DTPA and Zn-DTPA given intravenously as a single dose of 10 to 1,000 micromol/kg (0.54-54 × maximum human dose, MHD). When treated within one hour of internal contamination, Ca-DTPA resulted in about a 10 fold higher rate of elimination of plutonium in the urine as compared to Zn-DTPA. The chelating capacity of Ca-DTPA is greatest immediately and up to approximately 24 hours after internal contamination when the radiocontaminant is still circulating and readily available for chelation. After the first dose of Ca-DTPA, maintenance treatment with either Ca-DTPA or Zn-DTPA resulted in similar rates of elimination of radioactivity. However, at comparable doses, Zn-DTPA had less toxicity (e.g., less depletion of trace metals, lower rate of mortality, the absence of kidney and liver vacuolization, and absence of small bowel hemorrhagic lesions).

In another study, rodents contaminated with aerosolized plutonium and americium were treated with Ca-DTPA and Zn-DTPA. The treatment schedule involved inhalation of Ca-DTPA 2 micromol/kg (0.11 MHD) 30 minutes after contamination followed by inhalation of Zn-DTPA 2 micromol/kg at approximately 6 hours, 1, 2, 3, and 6 days, then twice weekly to day 26 or day 27. The treatment regime reduced the lung deposit of plutonium and americium to 1-2% of that in untreated animals. Systemic deposit in liver and skeleton were reduced by half.

Literature and U.S. Registry data in humans indicate that intravenous administration of Zn-DTPA forms chelates with radioactive contaminants found in the circulation, interstitial fluid, and tissues. When Zn-DTPA is administered by inhalation, it can chelate transuranium elements. Expectoration is expected to decrease the amount of radioactive contaminant available for systemic absorption.

Plasma retention and urinary excretion data were obtained in 2 subjects that received 750 kBq of 14C-DTPA. As shown in Figure 1, the radiolabeled DTPA was rapidly distributed throughout the extracellular fluid space and was cleared by glomerular filtration. The plasma retention up to 7 hours post dosing was expressed by the sum of three exponential components with average half lives of 1.4 min, 14.5 min, and 94.4 min. The level of activity in the plasma was below the limit of detection 24 hours after injection. During the study, no detectable activity was exhaled or excreted in the feces. By 24 hours, cumulative urinary excretion was more than 99% of the injected dose. 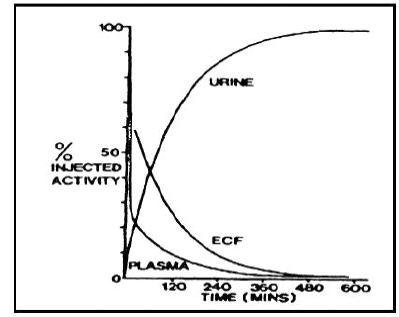 Zn-DTPA is poorly absorbed in the gastrointestinal tract. In animal studies, after oral administration, absorption was approximately 5%. In a U.S. Registry of 18 patients who received a single inhaled or intravenous dose of 1 gram, urine data indicate that the inhaled product was absorbed and resulted in a comparable elimination of the radiocontaminant. One study of 2 human subjects that received Ca-DTPA with 14C-DTPA by inhalation revealed approximately 20% absorption from the lungs. Human or animal bioavailability comparisons for Zn-DTPA are not available after administration by inhalation and intravenous injection. [See Clinical Studies (14)]

Following intravenous administration, Zn-DTPA is rapidly distributed throughout the extracellular fluid space. No significant amount of Zn-DTPA penetrates into erythrocytes or other cells. No accumulation of Zn-DTPA in specific organs has been observed. There is little or no binding of the chelating agent by the renal parenchyma.

Zn-DTPA undergoes a minimal amount of metabolic change in the body.

Zn-DTPA results in minimal depletion of magnesium and manganese.

Zn-DTPA is cleared from the plasma in the first few hours after dosing through urinary excretion by glomerular filtration. Renal tubular excretion has not been documented. In stool samples, only a very small amount of radioactivity (<3%) was detected.

Adequate and well-controlled pharmacokinetic and pharmacodynamic studies in renally impaired and/or hepatically impaired patients were not identified in the literature. Both Zn-DTPA and its radioactive chelates are excreted by glomerular filtration. Impaired renal function may decrease their rates of elimination and increase the serum half-life of Zn-DTPA.

Studies with Zn-DTPA to evaluate carcinogenesis, mutagenesis and impairment of fertility have not been performed. Data for Zn-DTPA effects on spermatogenesis are not available.

In 286 individuals, bioassays were available to measure urinary radioactivity elimination after chelation therapy. Of these 286 individuals, 18 had matched pre- and post-chelator urine radioactivity bioassay results available. The majority of these individuals received Ca-DTPA as the initial component to their chelation therapy. When multiple chelator doses were administered over days, the standard of practice was to switch therapy to Zn-DTPA following an initial dose of Ca-DTPA. Although both chelators were considered equipotent 24 hours following internal contamination, Zn-DTPA was considered less toxic. In one individual who received 3 doses, 1 gram each, by nebulization (1:1 Zn-DTPA and saline) followed by 6 intravenous doses, the urinary excretion of plutonium after the first nebulized dose was increased by a factor of 45.

After initial treatment with Ca-DTPA, maintenance treatment was continued with daily 1 gram Zn-DTPA doses administered over a period of days, months or years, depending on the extent of internal contamination and individual response to therapy. Treatment was generally continued until the excretion enhancement factor (EEF) approached 1. The longest treatment duration was 3.5 years. Similar increases in urinary radioactivity elimination were supported by data from the remaining 268 individuals in the U.S. Registry and from the literature.

How is Pentetate zinc trisodium Supplied

Zn-DTPA is supplied as a sterile solution in 5 mL single-use clear glass ampoules at a concentration of 200 mg/mL for intravenous use. Each ampoule contains the equivalent of 1000 mg of Pentetate zinc trisodium.

Inspect parenteral drug products visually for particulate matter and discoloration prior to administration, whenever solution and container permit. The product may be filtered using a sterile filter if particles are seen subsequent to opening of the ampoule.

OPC ampoule: to open, turn so that the point faces upward and break off the neck with a downward movement. 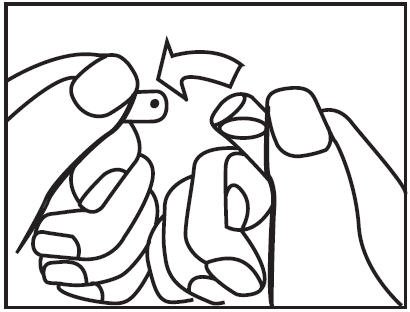 IInstruct parents and child-care givers to take extra precaution in handling the urine, feces, and expectorants of children to avoid any additional exposure to either the care-giver or to the child.

To develop long-term response data and information on the risk of developing late malignancy, detailed information on patient treatment should be provided to the manufacturer (see Patient Treatment Data Form). To obtain additional forms, please use the enclosed form as a template or see the following website: www.zn-dtpa.com. These data should include a record of the radioactive body burden and bioassay results at defined time intervals, a description of measurement methods to facilitate analysis of data, and adverse events.

Questions regarding the use of Zn-DTPA for the treatment of internal contamination with transuranium elements may be referred to:

10 x 5 mL Single-Dose Ampoules
For intravenous or inhalation use only. 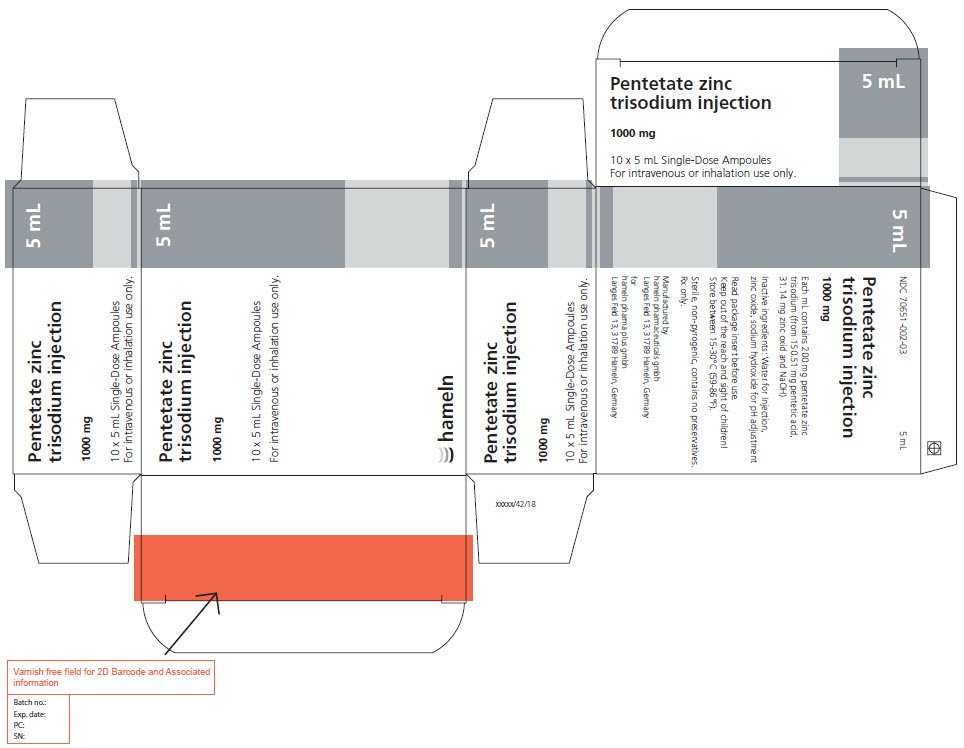