The Liposyn II brand name has been discontinued in the U.S. If generic versions of this product have been approved by the FDA, there may be generic equivalents available.

Liposyn II (Intravenous Fat Emulsion) is a sterile, nonpyrogenic fat emulsion for intravenous administration. It is supplied in both a 10% and 20% concentration.

Liposyn II 10% contains 5% safflower oil, 5% soybean oil, up to 1.2% egg phosphatides added as an emulsifier and 2.5% glycerin in water for injection. May contain sodium hydroxide for pH adjustment. pH 8.0 (6.0 − 9.0). Liposyn II 10% has an osmolarity of 276 mOsmol/liter (actual). The total caloric value of Liposyn II 10% including fat, phospholipid and glycerol is 1.1 kcal/mL. Of this total, approximately 0.6 kcal/mL is supplied by linoleic acid.

Liposyn II 20% contains 10% safflower oil, 10% soybean oil, 1.2% egg phosphatides and 2.5% glycerin in water for injection. May contain sodium hydroxide for pH adjustment. pH 8.3 (6.0 − 9.0). Liposyn II 20% has an osmolarity of 258 mOsmol/liter (actual). The total caloric value of Liposyn II 20% including fat, phospholipid and glycerol is 2 kcal/mL. Of this total, approximately 1.2 kcal/mL are supplied by linoleic acid.

Safflower oil and Soybean Oil, USP are mixtures of neutral triglycerides with the following structure: 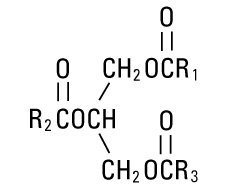 are saturated and unsaturated fatty acid residues. The major component fatty acids of the 50/50 safflower/soybean oil mixture are approximately 65.8% linoleic, 17.7% oleic, 8.8% palmitic, 3.4% stearic, and 4.2% linolenic acid. These fatty acids have the following chemical and structural formulas:

Egg phosphatides, purified, are primarily a mixture of naturally occurring phospholipids which are isolated from the egg yolk. These phospholipids have the following general structure:

are the same saturated and unsaturated fatty acid residues that abound in neutral fats. R3 is primarily either the choline [HOCH2CH2N(CH3)3OH] ester or ethanolamine (HOCH2CH2NH2) ester of phosphoric acid (H3PO4).

Glycerin, USP is chemically designated C3H803 and is a clear colorless, hygroscopic syrupy liquid. It has the following structural formula:

Phosphatides are the hydrophobic components of membranes and provide electrically insulated layers. They are involved in the formation of membrane structures. Choline prevents the deposition of fat in the liver.

Glycerol is metabolized to carbon dioxide and glycogen or is used in the synthesis of body fats.

Indications and Usage for Liposyn II

Liposyn II is indicated as a source of calories for patients requiring parenteral nutrition. Where such nutrition is required for extended periods of time (more than 5 days), Liposyn II is also indicated as a source of essential fatty acids to prevent or reverse biochemical changes in fatty acid composition of plasma lipids (elevated triene/tetraene ratio) and the clinical manifestations of EFAD.

The administration of Liposyn II (Intravenous Fat Emulsion) is contraindicated in patients demonstrating disturbances in normal fat metabolism such as pathologic hyperlipemia, lipoid nephrosis or acute pancreatitis if accompanied by hyperlipemia.

Caution should be exercised in administering Liposyn II (Intravenous Fat Emulsion) to patients with severe liver damage, pulmonary disease, anemia or blood coagulation disorders or when there is danger of fat embolism. The too rapid administration of Liposyn II can cause fluid and/or fat overloading resulting in dilution of serum electrolyte concentrations, overhydration, congested states, pulmonary edema, impaired pulmonary diffusion capacity or metabolic acidosis.

WARNING: This product contains aluminum that may be toxic. Aluminum may reach toxic levels with prolonged parenteral administration if kidney function is impaired. Premature neonates are particularly at risk because their kidneys are immature, and they require large amounts of calcium and phosphate solutions, which contain aluminum.

Because free fatty acids displace bilirubin bound to albumin, the use of lipid infusions in jaundiced or premature infants should be undertaken with caution.

During Liposyn II administration, the patient’s hemogram, blood coagulation, liver function, platelet count and plasma lipid profile must be closely monitored. The lipemia must clear between daily infusions. Liposyn II should be discontinued should a significant abnormality in any one of these parameters be attributed to the infusion.

Liposyn II is supplied in single-dose containers. Partially used containers must be discarded and should not be stored or resterilized for later use. Do not administer the contents of any container in which the emulsion appears to be oiling out.

This product contains no more than 25 mcg/L of aluminum.

Sepsis due to contamination of administration equipment and thrombophlebitis due to vein irritation from concurrently administered hypertonic solutions have been encountered. These are attributable to I.V. therapy in general or to the type of infusion administered.

The following reactions have been noted with long-term therapy with lipid infusions in general: Hepatomegaly, jaundice due to central lobular cholestasis, splenomegaly, thrombocytopenia, leucopenia, transient increases in liver function tests, overloading syndrome and deposition of brown pigment (“fat pigment”) in the reticuloendothelial tissue of the liver. The significance of this last occurrence and its cause are unknown.

In the event of fat overload during therapy, stop the infusion of Liposyn II (Intravenous Fat Emulsion) until visual inspection of the plasma, determination of triglyceride concentrations, or measurement of plasma light-scattering activity by nephelometry indicates the lipid has cleared. Re-evaluate the patient and institute appropriate corrective measures. See WARNINGS and PRECAUTIONS.

Liposyn II (Intravenous Fat Emulsion) should be administered as part of an intravenous total nutrition program via peripheral vein or central venous catheter.

Liposyn II can provide up to 60% of daily calories at a dose not to exceed 3 g/kg of body weight per day. The other 40% should be provided by carbohydrate and amino acids.

For the prevention of essential fatty acid deficiency, the recommended daily requirement is approximately 4% of the caloric intake as linoleate. In most adult patients, this can be supplied as 500 mL of Liposyn II 10% or 250 mL of Liposyn II 20% administered twice weekly.

Liposyn II can provide up to 60% of daily calories at a dose not to exceed 4 g/kg of body weight per day. The other 40% should be provided by carbohydrate and amino acids.

The infusion should be started at a rate of 0.1 mL/minute for the first 15 minutes. If no adverse effects are observed during this initial infusion, the rate can be increased to allow no more than 100 mL of Liposyn II 10% or 50 mL of Liposyn II 20% per hour.

With the exception of heparin at 1 to 2 units/mL of fat emulsion, additives to the Liposyn II bottle are contraindicated.

Partly used containers must not be stored for later use. Filters of less than 1.2 micron porosity must not be used with Liposyn II. Do not use any bottle in which there appears to be an oiling out of the emulsion.

See CONTRAINDICATIONS regarding mixing this emulsion with other I.V. fluids or additives.

Liposyn II can be infused into the same central or peripheral vein as the carbohydrate/amino acid solutions by means of a short Y-connector near the infusion site. This allows for mixing of the solutions immediately before entering the vein or for alternation of each solution. Flow rates of each solution should be controlled separately by infusion pumps, if these are used. Fat emulsion may also be infused through a separate peripheral site. If desired, heparin may be added to Liposyn II at a concentration of 1 to 2 units per mL prior to administration. Alternatively, studies have documented the stability of Liposyn® II 10% and 20%, necessary Hospira electrolytes, Hospira trace metals, and Hospira 10% through 70% Dextrose Injection, USP in a TPN admixture container with the following Hospira amino acid solutions:

Admixtures were compounded in either a nonphthalate polyvinylchloride (PVC) or an ethylene vinyl acetate (EVA) container. (See NOTE). SEE MIXING INSTRUCTIONS FOR COMBINED ADMINISTRATION. Compounded admixtures may be stored under refrigeration for up to 24 hours. Administration of admixtures should be completed within 24 hours after removal from refrigeration.

Conventional administration sets contain polyvinyl chloride (PVC) components that have DEHP (diethylhexyl phthalate) as a plasticizer. Fat-containing fluids such as Liposyn II extract DEHP from this PVC component, and it may be advisable to consider infusion of Liposyn II or the 3-in-1 admixture through a non-DEHP administration set.

A 1.2 micron air-eliminating filter can be used to deliver either a stable 3-in-1 admixture containing Liposyn II or the emulsion alone. Parenteral drug products should be inspected visually for particulate matter and discoloration prior to administration, whenever solution and container permit.

It is absolutely essential that the admixture be prepared using strict aseptic techniques as this nutrient mixture is a good growth media for microorganisms.

Studies have documented the stability of Liposyn®II 10% and 20% with necessary Hospira electrolytes, Hospira trace metals, and Hospira 10% through 70% Dextrose Injection, USP in a TPN admixture container with the following Hospira amino acid solutions:

NOTE: The TPN admixture containers used in the stability studies were formulated to minimize lipid/container interactions. The principal bag materials were a nonphthalate polyvinylchloride (PVC) or ethylene vinyl acetate (EVA). The only significant leachable from EVA is acetate. Acetate is found in total parenteral nutrition (TPN) admixtures as acetic acid, used for adjusting the pH of amino acid solutions, and as lysine acetate. The level of leachable acetate from EVA is not sufficient to alter the final acetate concentration significantly. Compounded admixtures may be stored under refrigeration for up to 24 hours. Administration of admixtures should be completed within 24 hours after removal from refrigeration. Reference should be made to the individual package inserts for detailed information on each component.

The prime destabilizers of emulsions are excessive acidity (low pH) and inappropriate electrolyte content. Careful consideration should be given to the dosage levels of the divalent cations (Ca++ and Mg++) administered, as these have been shown to cause emulsion instability. Amino acid solutions exert a buffering effect, protecting the emulsion.

The following proper mixing sequence must be followed to minimize pH-related problems by ensuring that typically acidic dextrose injections are not mixed with lipid emulsion alone:

Admixing should be accompanied by gentle agitation to avoid localized concentration effects. Simultaneous or sequential mixing of Liposyn II with other nutritional substrates using an automated, gravimetric pumping system is considered an acceptable method for admixture compounding, especially for institutions with a high volume of 3-in-1 admixtures.

How is Liposyn II Supplied

Liposyn II (Intravenous Fat Emulsion) 10% and 20% is a white to slightly off-white emulsion with no evidence of oiling out of the emulsion.