FEIBA is an Anti-Inhibitor Coagulant Complex indicated for use in hemophilia A and B patients with inhibitors for:

A guide for dosing FEIBA is provided in Table 1.

FEIBA is available as a lyophilized powder in single-dose glass vials containing nominally 500, 1000, or 2500 units per vial.

Thromboembolic events (including venous thrombosis, pulmonary embolism, myocardial infarction, and stroke) can occur with FEIBA, particularly following the administration of high doses (above 200 units per kg per day) and/or in patients with thrombotic risk factors [see Adverse Reactions (6)].

Patients with DIC, advanced atherosclerotic disease, crush injury, septicemia, or concomitant treatment with recombinant factor VIIa have an increased risk of developing thrombotic events due to circulating tissue factor or predisposing coagulopathy. Potential benefit of treatment with FEIBA should be weighed against the potential risk of these thromboembolic events.

Monitor patients receiving more than 100 units per kg of body weight of FEIBA for the development of DIC, acute coronary ischemia and signs and symptoms of other thromboembolic events. If clinical signs or symptoms occur, such as chest pain or pressure, shortness of breath, altered consciousness, vision, or speech, limb or abdomen swelling and/or pain, discontinue the infusion and initiate appropriate diagnostic and therapeutic measures.

Hypersensitivity and allergic reactions, including severe anaphylactoid reactions, can occur following the infusion of FEIBA. The symptoms include urticaria, angioedema, gastrointestinal manifestations, bronchospasm, and hypotension. These reactions can be severe and systemic (e.g., anaphylaxis with urticaria and angioedema, bronchospasm, and circulatory shock). Other infusion reactions, such as chills, pyrexia, and hypertension have also been reported. If signs and symptoms of severe allergic reactions occur, immediately discontinue administration of FEIBA and provide appropriate supportive care.

Because FEIBA is made from human plasma it may carry a risk of transmitting infectious agents, e.g., viruses, and the variant Creutzfeldt-Jakob disease (vCJD) agent, and theoretically, the Creutzfeldt-Jakob disease (CJD) agent. The risk has been minimized by screening plasma donors for prior exposure to certain viruses, by testing for the presence of certain current virus infections and by inactivating and removing certain viruses during the manufacturing process [see Description (11)]. Despite these measures, the product may still potentially transmit human pathogenic agents. There is also the possibility that unknown infectious agents may still be present.

All infections thought by a physician to have been possibly transmitted by this product should be reported by the physician or other healthcare providers to Baxalta US Inc., at 1-800-423-2090 (in the U.S.) and /or to FDA Med Watch (1-800-FDA-1088 or www.fda.gov/medwatch).

Presence of Isohemagglutinins and Interference with Laboratory Tests

FEIBA contains blood group isohemagglutinins (anti-A and anti-B). Passive transmission of antibodies to erythrocyte antigens, e.g., A, B, D, may interfere with some serological tests for red cell antibodies, such as antiglobulin test (Coombs test).

The most frequently reported adverse reactions observed in >5% of subjects in the prophylaxis trial were anemia, diarrhea, hemarthrosis, hepatitis B surface antibody positive, nausea, and vomiting.

The safety assessment of FEIBA is based on the review of the data from two prospective clinical trials in which FEIBA was used for the treatment of acute bleeding episodes and a prospective trial that compared the use of FEIBA prophylactically versus on-demand treatment.

The adverse reactions reported from two prospective clinical trials in which FEIBA was used for the treatment of acute bleeding episodes were chills, chest pain, chest discomfort, dizziness, dysgeusia, dyspnea, hypoesthesia, increase of inhibitor titer (anamnestic response), nausea, pyrexia, and somnolence. Specifically, the first trial was a multicenter randomized, double-blind trial in 15 hemophilia A subjects with inhibitors to factors VIII. The second trial was a multicenter FEIBA study conducted in 44 hemophilia A subjects with inhibitors, 3 hemophilia B subjects with inhibitors and 2 acquired factor VIII inhibitor subjects. Of the 489 infusions used to treat acute bleeds during the second trial, 18 (3.7%) caused minor transient reactions of chills, fever, nausea, dizziness and dysgeusia. Out of 49 subjects, 10 (20%) had a rise in their inhibitor titers after treatment with FEIBA. Five of these subjects (50%) had increases that were tenfold or more, and 3 (30%) of these subjects received factor VIII or IX concentrates within 2 weeks prior to treatment with FEIBA. These anamnestic rises were not associated with decreased efficacy of FEIBA.

The following adverse reactions have been identified during post-approval use of FEIBA. Because post-marketing reporting of adverse reactions is voluntary and from a population of uncertain size, it is not always possible to reliably estimate the frequency of these reactions or establish a causal relationship to product exposure.

Consider the possibility of thrombotic events when systemic antifibrinolytics such as tranexamic acid and aminocaproic acid are used during treatment with FEIBA. No adequate and well-controlled studies of the combined or sequential use of FEIBA and recombinant factor VIIa antifibrinolytics, or emicizumab have been conducted. Use of antifibrinolytics within approximately 6 to 12 hours after the administration of FEIBA is not recommended.

Clinical experience from an emicizumab clinical trial suggests that a potential drug interaction may exist with emicizumab when FEIBA was used as part of a treatment regimen for breakthrough bleeding.6 [see Warnings and Precautions (5.1)]

In the U.S. general population, the estimated background risk for major birth defects and miscarriage in clinically recognized pregnancies is 2-4% and 15-20%, respectively.

There is no information available on the effect of FEIBA on labor and delivery.

There is no information regarding the presence of FEIBA in human milk, the effect on the breastfed child, or the effects on milk production.

The developmental and health benefits of breastfeeding should be considered along with the mother's clinical need for FEIBA and any potential adverse effects on the breastfed child from FEIBA or from the underlying condition.

The safety and efficacy of FEIBA has not been evaluated in neonates.

The safety and efficacy of FEIBA has not been evaluated in subjects ≥ 65 years of age.

FEIBA is manufactured from large pools of human plasma. Screening against potentially infectious agents begins with the donor selection process and continues throughout plasma collection and plasma preparation. Each individual plasma donation used in the manufacture of FEIBA is collected at FDA approved blood establishments and is tested by FDA licensed serological tests for Hepatitis B Surface Antigen (HBsAg), and for antibodies to Human Immunodeficiency Virus (HIV-1/HIV-2) and Hepatitis C Virus (HCV) Mini-pools of the plasma are tested and found negative for the presence of HIV-1 and HCV by FDA licensed Nucleic Acid Testing (NAT).

To reduce the risk of viral transmission, the manufacturing process of FEIBA includes two dedicated and independent virus removal/inactivation steps namely 35 nm nanofiltration and a vapor heat treatment process. In addition, the DEAE-Sephadex adsorption contributes to the virus safety profile of FEIBA.

In vitro spiking studies have been used to validate the capability of the manufacturing process to remove and inactivate viruses. Table 3 summarizes the results of the viral clearance studies for FEIBA.

The mechanism of action of FEIBA is still the subject of scientific discussion. FEIBA contains multiple components, mainly non-activated factors II, IX, X and mainly activated factor VII. These factors can interact with plasma coagulation factors and platelets to increase the impaired thrombin generation of hemophilia patients with inhibitors, leading to hemostasis.

Laboratory assessment of coagulation does not necessarily correlate with or predict the hemostatic effectiveness of FEIBA. Factor VIII inhibitor bypassing activity of FEIBA has been demonstrated in vitro as well as in vivo. FEIBA can shorten the activated partial thromboplastin time (aPTT) and increase the thrombin generation in plasma containing factor VIII inhibitor.4,5

FEIBA is composed of different coagulation factors, with varying half-lives for the individual components. The pharmacokinetic properties of FEIBA have not been formally studied in humans.

Control and Prevention of Bleeding Episodes

The efficacy of FEIBA in the treatment of bleeding episodes has been demonstrated by two prospective clinical trials.1,2

The first trial was a multicenter, randomized, double-blind trial comparing the effect of FEIBA and a non-activated prothrombin complex concentrate in 15 subjects with hemophilia A and inhibitors to factor VIII. The inclusion criteria were history of high titer inhibitors, high responder status, more than 1 bleeding episode per month in the prior year and no signs of liver failure. A total of 150 bleeding episodes including 117 joint, 20 musculoskeletal and 4 mucocutaneous bleeds, were treated. A single dose of 88 units per kg of body weight was used uniformly for treatments with FEIBA. A second treatment was allowed for muscle bleeds after 12 hours and 6 hours after mucocutaneous bleeds, if necessary.

The second trial with FEIBA was a multicenter randomized, prospective trial. This trial was conducted in 44 hemophilia A subjects with inhibitors, 3 hemophilia B subjects with inhibitors and 2 acquired factor VIII inhibitor subjects. It was designed to evaluate the efficacy of FEIBA in the treatment of joint, mucous membrane, musculocutaneous and emergency bleeding episodes such as central nervous system hemorrhages and surgical bleedings. The inclusion criteria used were age >4 years, history of inhibitor titer ≥4 Bethesda Units (BU) and without chronic liver disease. Subjects were excluded if they had a history of thromboembolic events or allergic reactions to FEIBA.

Forty-nine (49) subjects with inhibitor titers of greater than 5 BU were enrolled from nine co-operating hemophilia centers. Subjects were treated with 50 units per kg of body weight, repeated at 12-hour intervals (6-hour intervals in mucous membrane bleedings), if necessary. A total of 489 infusions were given for the treatment of 165 bleeding episodes (102 joint, 33 muscle and soft tissue, 20 mucous membrane, and 10 emergency bleeds, including 3 central nervous system bleeds and 4 surgical procedures). Bleeding was controlled in 153 episodes (93%). In 130 (78%) of the episodes, hemostasis was achieved with one or more infusions within 36 hours. Of these, 36% were controlled with one infusion within 12 hours. An additional 14% of episodes responded after more than 36 hours.

In a multicenter, open-label, prospective, randomized clinical trial comparing subjects receiving FEIBA for prophylaxis with subjects receiving FEIBA for on-demand treatment, 36 hemophilia A and B subjects with inhibitors to factor VIII or IX were analyzed in the intent-to-treat analysis. Study population included 29 (80.6%) Caucasian, 3 (8.3%) Asian, 2 (5.6%) Black/African American, and 2 (5.6%) other. Inclusion criteria were subjects with a history of high titer inhibitors or low titer refractory to increased factor VIII or IX dosing, age range between 4 and 65, and subjects receiving bypassing agents with ≥12 bleeds in the 12 months prior to trial entry. Subjects with a history of thromboembolic events, symptomatic liver disease, or a platelet count <100,000 per mL, and those receiving immune tolerance induction or routine prophylaxis were excluded.

Hemostatic efficacy for treatment of acute bleeds was evaluated at 6 and 24 hours according to a pre-specified four-point scale of excellent, good, fair, or none. An evaluation of "none" was considered a treatment failure. The criteria for evaluation of the effectiveness were relief of pain, cessation of bleeding, and number of infusions required to treat a bleed.

Hemostatic efficacy for routine prophylaxis was evaluated against subjects who received on-demand therapy.

ABR by age category between on-demand and prophylaxis regimens is provided in Table 4. One adolescent subject on prophylaxis had a higher rate of bleeding possibly due to increased physical activity after study enrollment.

FEIBA is available in single-dose vials in the following nominal dosage strengths:

The number of units of factor VIII inhibitor bypassing activity is stated on the label of each vial.

FEIBA is packaged with a suitable volume (10 mL, 20 mL or 50 mL) of Sterile Water for Injection, U.S.P., one BAXJECT II Hi-Flow Needleless Transfer Device, and one Package Insert.

Not made with natural rubber latex.

To enroll in the confidential, Industry-wide Patient Notification System, call 1-888-873-2838.

FEIBA® is a registered trademark of Baxalta Incorporated, a Takeda company. 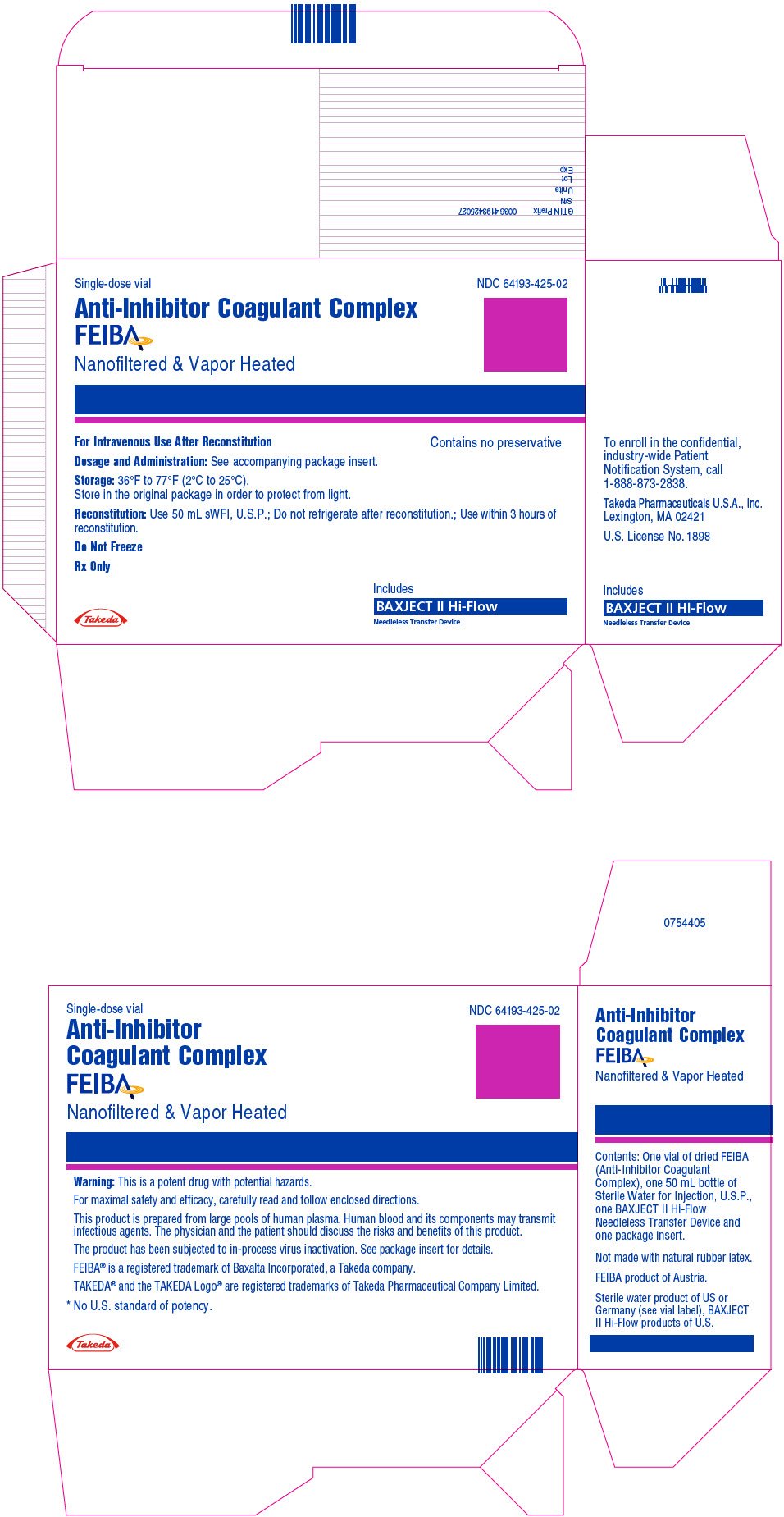 For Intravenous Use After Reconstitution
No preservative