Indications and Usage for Exondys 51

EXONDYS 51 is indicated for the treatment of Duchenne muscular dystrophy (DMD) in patients who have a confirmed mutation of the DMD gene that is amenable to exon 51 skipping. This indication is approved under accelerated approval based on an increase in dystrophin in skeletal muscle observed in some patients treated with Exondys 51 [see Clinical Studies (14)]. Continued approval for this indication may be contingent upon verification of a clinical benefit in confirmatory trials.

The recommended dose of EXONDYS 51 is 30 milligrams per kilogram administered once weekly as a 35 to 60 minute intravenous infusion via an in-line 0.2 micron filter.

If a dose of EXONDYS 51 is missed, it may be administered as soon as possible after the scheduled time.

Application of a topical anesthetic cream to the infusion site prior to administration of EXONDYS 51 may be considered.

EXONDYS 51 is administered via intravenous infusion. Flush the intravenous access line with 0.9% Sodium Chloride Injection, USP, prior to and after infusion.

If a hypersensitivity reaction occurs, consider slowing the infusion or interrupting the Exondys 51 therapy [see Warnings and Precautions (5.1) and Adverse Reactions (6.1)].

EXONDYS 51 is a clear and colorless solution that may have some opalescence, and may contain trace amounts of small, white to off-white amorphous particles, and is available as follows:

Hypersensitivity reactions, including bronchospasm, chest pain, cough, tachycardia, and urticaria, have occurred in patients who were treated with Exondys 51. If a hypersensitivity reaction occurs, institute appropriate medical treatment and consider slowing the infusion or interrupting the Exondys 51 therapy [see Dosage and Administration (2.3)].

EXONDYS 51 was studied in a double-blind, placebo-controlled study for 24 weeks (Study 1), followed by an open label extension (Study 2). In Study 1, 12 patients were randomized to receive weekly intravenous infusions of EXONDYS 51 (n=8) or placebo (n=4) for 24 weeks. All 12 patients continued in Study 2 and received open-label EXONDYS 51 weekly for up to 208 weeks

Adverse reactions that occurred in 2 or more patients who received Exondys 51 and were more frequent than in the placebo group in Study 1 are presented in Table 1 (the 30 and 50 mg/kg groups are pooled). Because of the small numbers of patients, these represent crude frequencies that may not reflect the frequencies observed in practice. The 50 mg/kg once weekly dosing regimen of EXONDYS 51 is not recommended [see Dosage and Administration (2.1)].

The most common adverse reactions were balance disorder and vomiting.

The following adverse reactions have been identified during observational studies that were conducted as part of the clinical development program and continued postapproval.

In open-label observational studies, 163 patients received at least one intravenous dose of EXONDYS 51, with doses ranging between 0.5 mg/kg (0.017 times the recommended dosage) and 50 mg/kg (1.7 times the recommended dosage). All patients were male and had genetically confirmed Duchenne muscular dystrophy. Age at study entry was 6 months to 19 years. Most (85%) patients were Caucasian.

The most common adverse reactions seen in greater than 10% of the study population were headache, cough, rash, and vomiting.

Hypersensitivity reactions have occurred in patients treated with Exondys 51 [see Warnings and Precautions (5.1)].

The following adverse reactions have been identified during postapproval use of Exondys 51. Because these reactions are reported voluntarily from a population of uncertain size, it is not always possible to reliably estimate their frequency or establish a causal relationship to drug exposure.

There are no human or animal data available to assess the use of EXONDYS 51 during pregnancy. In the U.S. general population, major birth defects occur in 2 to 4% and miscarriage occurs in 15 to 20% of clinically recognized pregnancies.

The developmental and health benefits of breastfeeding should be considered along with the mother's clinical need for EXONDYS 51 and any potential adverse effects on the breastfed infant from EXONDYS 51 or from the underlying maternal condition.

EXONDYS 51 is indicated for the treatment of Duchenne muscular dystrophy (DMD) in patients who have a confirmed mutation of the DMD gene that is amenable to exon 51 skipping, including pediatric patients [see Clinical Studies (14)].

Intravenous administration of eteplirsen (0, 100, 300, or 900 mg/kg) to juvenile male rats once weekly for 10 weeks beginning on postnatal day 14 resulted in renal tubular necrosis at the highest dose tested and decreased bone densitometry parameters (mineral density, mineral content, area) at all doses. The kidney findings were associated with clinical pathology changes (increased serum urea nitrogen and creatinine, decreased urine creatinine clearance). No effects were observed on the male reproductive system, neurobehavioral development, or immune function. An overall no-effect dose was not identified. Plasma eteplirsen exposure (AUC) at the lowest dose tested (100 mg/kg) was similar to that in humans at the recommended human dose (30 mg/kg).

DMD is largely a disease of children and young adults; therefore, there is no geriatric experience with EXONDYS 51.

Renal clearance of eteplirsen is reduced in non-DMD adults with renal impairment based on estimated creatinine clearance [see Clinical Pharmacology (12.3)]. However, because of the effect of reduced skeletal muscle mass on creatinine measurements in DMD patients, no specific dosage adjustment can be recommended for DMD patients with renal impairment.

There is no experience with overdose of EXONDYS 51.

EXONDYS 51 (eteplirsen) injection is a sterile, aqueous, preservative-free, concentrated solution for dilution prior to intravenous administration. EXONDYS 51 is clear and colorless, and may have some opalescence, and may contain trace amounts of small, white to off-white amorphous particles. EXONDYS 51 is supplied in single dose vials containing 100 mg or 500 mg eteplirsen (50 mg/mL). EXONDYS 51 is formulated as an isotonic, phosphate buffered saline solution with an osmolality of 260 to 320 mOsm and a pH of 7.5. Each milliliter of EXONDYS 51 contains 50 mg eteplirsen; 0.2 mg potassium chloride, 0.2 mg potassium phosphate monobasic, 8 mg sodium chloride, and 1.14 mg sodium phosphate dibasic, anhydrous, in water for injection. The product may contain hydrochloric acid or sodium hydroxide to adjust pH.

Eteplirsen is an antisense oligonucleotide of the phosphorodiamidate morpholino oligomer (PMO) subclass. PMOs are synthetic molecules in which the five-membered ribofuranosyl rings found in natural DNA and RNA are replaced by a six-membered morpholino ring. Each morpholino ring is linked through an uncharged phosphorodiamidate moiety rather than the negatively charged phosphate linkage that is present in natural DNA and RNA. Each phosphorodiamidate morpholino subunit contains one of the heterocyclic bases found in DNA (adenine, cytosine, guanine, or thymine). Eteplirsen contains 30 linked subunits. The molecular formula of eteplirsen is C364H569N177O122P30 and the molecular weight is 10305.7 daltons.

The structure and base sequence of eteplirsen are:

Eteplirsen is designed to bind to exon 51 of dystrophin pre-mRNA, resulting in exclusion of this exon during mRNA processing in patients with genetic mutations that are amenable to exon 51 skipping. Exon skipping is intended to allow for production of an internally truncated dystrophin protein, which was evaluated in Study 2 and Study 3 [see Clinical Studies (14)].

Following single or multiple intravenous infusions of EXONDYS 51 in male pediatric DMD patients, plasma concentration-time profiles of eteplirsen were generally similar and showed multi-phasic decline. The majority of drug elimination occurred within 24 hours. Approximate dose-proportionality and linearity in PK properties were observed following multiple-dose studies (0.5 mg/kg/week [0.017 times the recommended dosage] to 50 mg/kg/week [1.7 times the recommended dosage]). There was no significant drug accumulation following weekly dosing across this dose range. The inter-subject variability for eteplirsen Cmax and AUC range from 20 to 55%.

Following single or multiple intravenous infusions of EXONDYS 51, the peak plasma concentrations (Cmax) of eteplirsen occurred near the end of infusion (i.e., 1.1 to 1.2 hours across a dose range of 0.5 mg/kg/week to 50 mg/kg/week).

In vitro investigation suggested that plasma protein binding of eteplirsen in human ranges between 6 to 17%. The mean apparent volume of distribution (Vss) of eteplirsen was 600 mL/kg following weekly intravenous infusion of EXONDYS 51 at 30 mg/kg.

Twenty-four hours after the end of the infusion, mean concentrations of eteplirsen were 0.07% of Cmax. Accumulation of eteplirsen during once weekly dosing has not been observed.

The total clearance of eteplirsen was 339 mL/hr/kg following 12 weeks of therapy with 30 mg/kg/week.

Eteplirsen did not appear to be metabolized by hepatic microsomes of any species tested, including humans.

Renal clearance of eteplirsen accounts for approximately two-thirds of the administered dose within 24 hours of intravenous administration. Elimination half-life (t1/2) of eteplirsen was 3 to 4 hours.

The pharmacokinetics of eteplirsen have been evaluated in male pediatric DMD patients. There is no experience with the use of EXONDYS 51 in patients 65 years of age or older.

Sex effects have not been evaluated; Exondys 51 has not been studied in female patients.

Potential impact of race is not known because 89% of the patients in studies were Caucasians.

Estimated creatinine clearance values derived from the Cockcroft-Gault equation and the threshold definitions for mild, moderate, and severe renal impairment in otherwise healthy adults would not be generalizable to patients with DMD. Therefore, no specific dosage adjustment can be recommended for patients with renal impairment.

EXONDYS 51 has not been studied in patients with hepatic impairment.

In vitro data showed that eteplirsen did not significantly inhibit CYP1A2, CYP2B6, CYP2C8, CYP2C9, CYP2C19, CYP2D6, or CYP3A4/5. Eteplirsen did not induce CYP2B6 or CYP3A4, and induction of CYP1A2 was substantially less than the prototypical inducer, omeprazole. Eteplirsen was not a substrate nor did it have any major inhibitory potential for any of the key human transporters tested (OAT1, OAT3, OCT1, OCT2, OATP1B1, OATP1B3, P-gp, BCRP, MRP2 and BSEP). Based on in vitro data on plasma protein binding, CYP or drug transporter interactions, and microsomal metabolism, eteplirsen is expected to have a low potential for drug-drug interactions in humans.

Eteplirsen was negative in in vitro (bacterial reverse mutation and chromosomal aberration in CHO cells) and in vivo (mouse bone marrow micronucleus) assays.

Fertility studies in animals were not conducted with eteplirsen. No effects on the male reproductive system were observed following intravenous administration of eteplirsen (0, 5, 40, or 320 mg/kg) to male monkeys once weekly for 39 weeks. Plasma eteplirsen exposure (AUC) in monkeys at the highest dose tested was 20 times that in humans at recommended human dose (30 mg/kg).

EXONDYS 51 was evaluated in three clinical studies in patients who have a confirmed mutation of the DMD gene that is amenable to exon 51 skipping.

In Study 1, patients were randomized to receive weekly infusions of EXONDYS 51 (30 mg/kg, n=4); Exondys 51 (50 mg/kg, n=4), or placebo (n=4) for 24 weeks. The primary endpoint was dystrophin production; a clinical outcome measure, the 6-minute walk test (6MWT), was also assessed. The 6MWT measures the distance that a patient can walk on a flat, hard surface in a period of 6 minutes. Patients had a mean age of 9.4 years, a mean 6-minute walk distance (6MWD) at baseline of 363 meters, and were on a stable dose of corticosteroids for at least 6 months. There was no significant difference in change in 6MWD between patients treated with EXONDYS 51 and those treated with placebo.

In Study 3, 13 patients were treated with open-label Exondys 51 (30 mg/kg) weekly for 48 weeks and had a muscle biopsy at baseline and after 48 weeks of treatment. Patients had a mean age of 8.9 years and were on a stable dose of corticosteroids for at least 6 months. Dystrophin levels in muscle tissue were assessed by Western blot. In the 12 patients with evaluable results, the pre-treatment dystrophin level was 0.16% ± 0.12% (mean ± standard deviation) of the dystrophin level in a healthy subject and 0.44% ± 0.43% after 48 weeks of treatment with Exondys 51 (p < 0.05). The median increase after 48 weeks was 0.1%.

Individual patient dystrophin levels from Study 3 are shown in Table 2.

EXONDYS 51 injection is supplied in single-dose vials. The solution is clear and colorless, and may have some opalescence, and may contain trace amounts of small, white to off-white amorphous particles.

SAREPTA, SAREPTA THERAPEUTICS, EXONDYS, Exondys 51, and the Exondys 51 Logo are trademarks of Sarepta Therapeutics, Inc. registered in the U.S. Patent and Trademark Office and may be registered in various other jurisdictions. 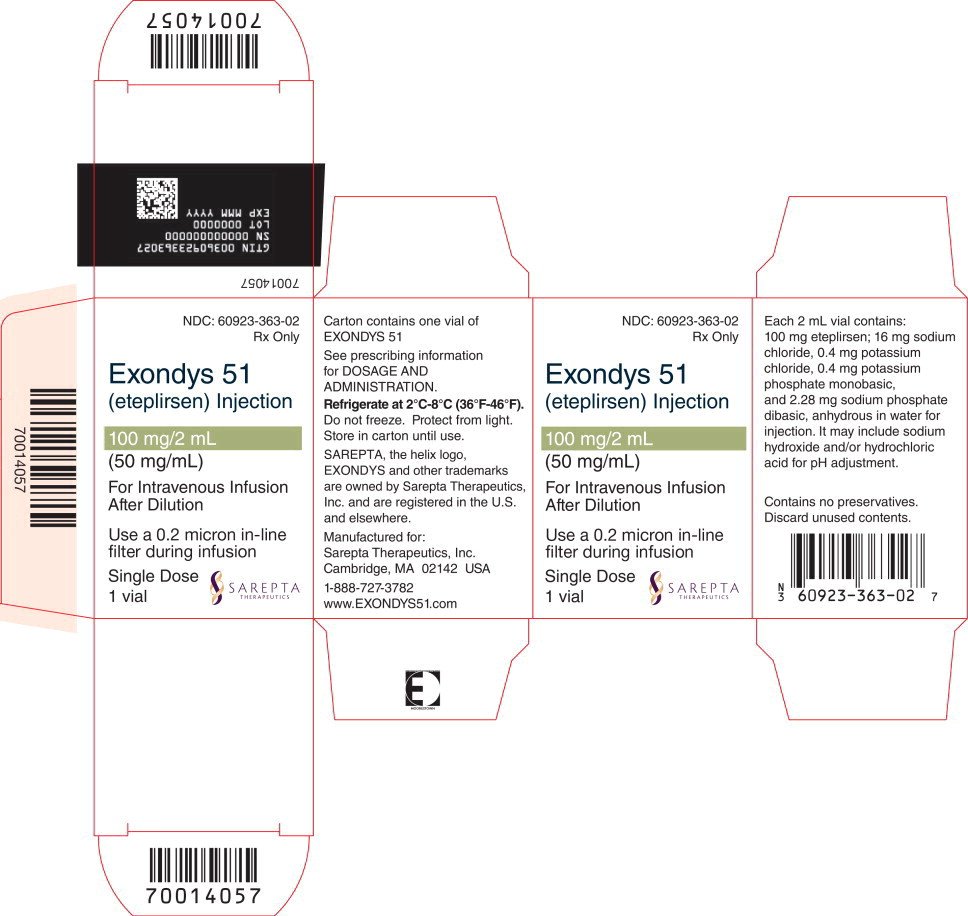 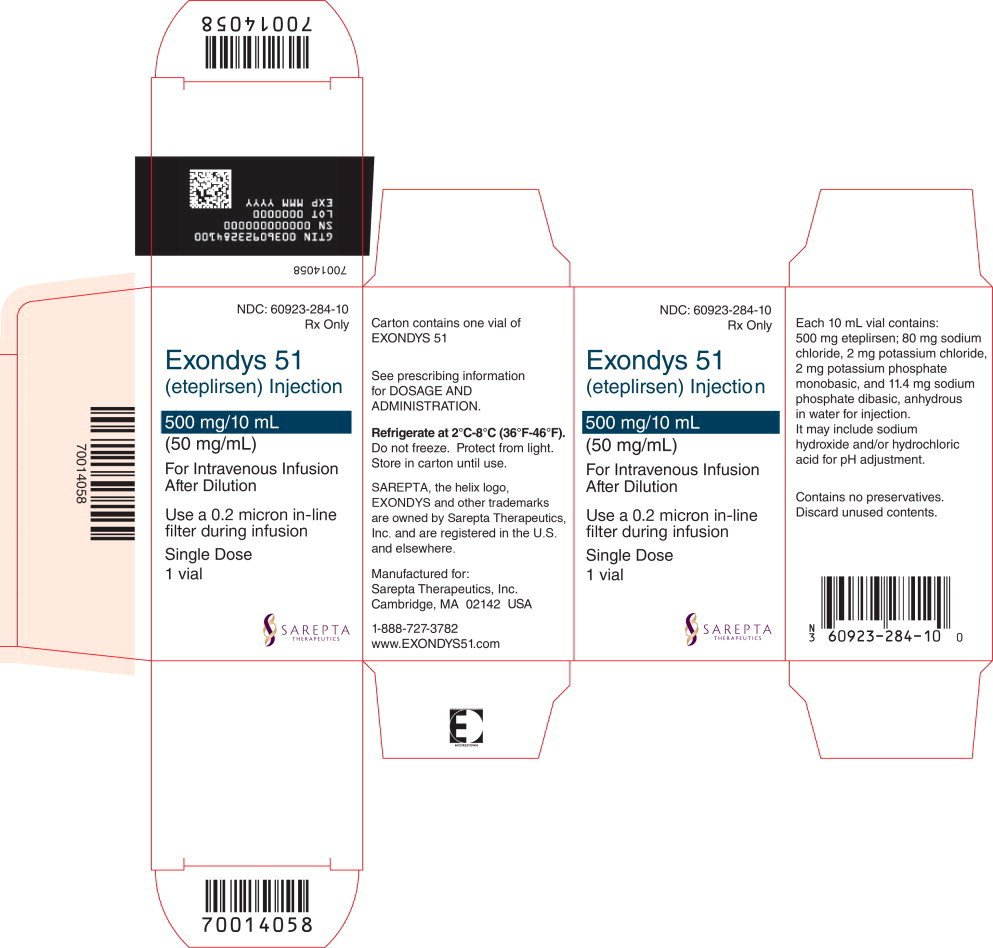 For Intravenous Infusion After Dilution