Indications and Usage for Deferiprone

Deferiprone tablets are indicated for the treatment of transfusional iron overload in adult and pediatric patients 8 years of age and older with thalassemia syndromes.

•
​Safety and effectiveness have not been established for the treatment of transfusional iron overload in patients with myelodysplastic syndrome or in patients with Diamond Blackfan anemia.

Due to the risk of agranulocytosis, monitor ANC before and during Deferiprone tablets therapy.

Test ANC prior to start of Deferiprone tablets therapy and monitor on the following schedule during treatment:

Due to the risk of hepatic transaminase elevations, monitor ALT before and monthly during Deferiprone tablets therapy [see Warnings and Precautions (5.2)].

Due to the risk of zinc deficiency, monitor zinc levels before and regularly during Deferiprone tablets therapy [see Warnings and Precautions (5.3)].

Recommended Dosage for 1,000 mg Deferiprone Tablets (three times a day) for Adult and Pediatric Patients with Transfusional Iron Overload due to Thalassemia Syndromes

To minimize gastrointestinal upset when first starting therapy, dosing can start at 45 mg/kg/day and increase weekly by 15 mg/kg/day increments until the full prescribed dose is achieved.

Allow at least a 4-hour interval between administration of Deferiprone tablets and other drugs or supplements containing polyvalent cations such as iron, aluminum, or zinc [see Drug Interactions (7.2), Clinical Pharmacology (12.3)].

•
Tablets (three times a day): 1,000 mg film-coated, modified capsule shaped, white to off-white with functional scoring and debossed with 54 [score] 23 on one side and plain on the other.

Deferiprone tablets are contraindicated in patients with known hypersensitivity to Deferiprone or to any of the excipients in the formulation. The following reactions have been reported in association with the administration of Deferiprone: Henoch-Schönlein purpura; urticaria; and periorbital edema with skin rash [see Adverse Reactions (6.2)].

Reduction in the frequency of ANC monitoring should be considered on an individual patient basis, according to the health care provider’s assessment of the patient’s understanding of the risk minimization measures required during therapy.

Advise patients taking Deferiprone tablets to immediately interrupt therapy and report to their physician if they experience any symptoms indicative of infection.

Implement a plan to monitor for and to manage agranulocytosis and neutropenia prior to initiating Deferiprone tablets treatment.

Consider hospitalization and other management as clinically appropriate.

Instruct the patient to immediately discontinue Deferiprone tablets and all other medications with a potential to cause neutropenia.

In pooled clinical trials, 7.5% of 642 patients with thalassemia syndromes treated with Deferiprone tablets developed increased ALT values. Four (0.62%) Deferiprone tablet-treated subjects discontinued the drug due to increased serum ALT levels and 1 (0.16%) due to an increase in both ALT and AST.

Monitor serum ALT values monthly during therapy with Deferiprone tablets and consider interruption of therapy if there is a persistent increase in the serum transaminase levels [see Dosage and Administration (2.1)].

Decreased plasma zinc concentrations have been observed on Deferiprone tablets therapy. Monitor plasma zinc annually, and supplement in the event of a deficiency [see Dosage and Administration (2.1)].

Based on findings from animal reproduction studies and evidence of genotoxicity, Deferiprone tablets can cause fetal harm when administered to a pregnant woman. The available data on the use of Deferiprone tablets in pregnant women are insufficient to inform risk. In animal studies, administration of Deferiprone during the period of organogenesis resulted in embryo-fetal death and malformations at doses lower than equivalent human clinical doses. Advise pregnant women and females of reproductive potential of the potential risk to the fetus [see Use in Specific Populations (8.1)].

The following clinically significant adverse reactions are described below and elsewhere in the labeling:

The most serious adverse reaction reported in clinical trials with Deferiprone tablets was agranulocytosis [see Warnings and Precautions (5.1)].

The table below lists the adverse drug reactions that occurred in at least 1% of patients treated with Deferiprone tablets in clinical trials in patients with thalassemia syndromes.

Gastrointestinal symptoms such as nausea, vomiting, and abdominal pain were the most frequent adverse reactions reported by patients participating in clinical trials and led to the discontinuation of Deferiprone tablets therapy in 1.6% of patients.

Chromaturia (reddish/brown discoloration of the urine) is a result of the excretion of iron in the urine.

The following additional adverse reactions have been reported in patients receiving Deferiprone tablets. Because these reactions are reported voluntarily from a population of uncertain size, it is not always possible to reliably estimate their frequency or to establish a causal relationship to drug exposure.

Drugs Associated with Neutropenia or Agranulocytosis

Avoid co-administration of Deferiprone tablets with other drugs known to be associated with neutropenia or agranulocytosis. If co-administration is unavoidable, closely monitor the absolute neutrophil count [see Warnings and Precautions (5.1)].

Effect of Other Drugs on Deferiprone Tablets

In animal reproduction studies, oral administration of Deferiprone to pregnant rats and rabbits during organogenesis at doses 33% and 49%, respectively, of the maximum recommended human dose (MRHD) resulted in structural abnormalities, embryo-fetal mortality and alterations to growth (see Data). The limited available data from Deferiprone use in pregnant women are insufficient to inform a drug-associated risk of major birth defects and miscarriage. Based on evidence and developmental toxicity in animal studies, Deferiprone tablets can cause fetal harm when administered to a pregnant woman. Advise pregnant women and females of reproductive potential of the potential risk to a fetus.

During organogenesis, pregnant rats and rabbits received Deferiprone at oral doses of 0, 30, 80 or 200 mg/kg/day, and 0, 10, 50, or 150 mg/kg/day, respectively. The daily dose was administered as two equal divided doses approximately 7 hours apart. Doses of 200 mg/kg/day in rats and 150 mg/kg/day in rabbits, approximately 33% and 49% of the MRHD, respectively, resulted in increased post-implantation loss and reduced fetal weights in the presence of maternal toxicity (reduced maternal body weight and body weight gain in both rats and rabbits; abnormal large placenta at low incidence in rats). The 200 mg/kg/day dose in rats resulted in external, visceral and skeletal fetal malformations, such as cranial malformations, cleft palate, limb malrotation, anal atresia, internal hydrocephaly, anophthalmia, and fused bones. The dose of 150 mg/kg/day in rabbits resulted in external fetal malformations (partially opened eyes) and minor blood vessel and skeletal variations.

In rats, malformations including micrognathia and persistent ductus arteriosus could be observed in the absence of maternal toxicity at doses equal to or greater than 30 and 80 mg/kg/day, approximately 5% and 13% of the MHRD, respectively.

Because of the potential for serious adverse reactions in the breastfed child, including the potential for tumorigenicity shown for Deferiprone in animal studies, advise patients that breastfeeding is not recommended during treatment with Deferiprone tablets, and for at least 2 weeks after the last dose.

Pregnancy testing is recommended for females of reproductive potential prior to initiating Deferiprone tablets.

Deferiprone tablets can cause embryo-fetal harm when administered to a pregnant woman [see Use in Specific Populations (8.1)]. Advise female patients of reproductive potential to use effective contraception during treatment with Deferiprone tablets and for at least 6 months after the last dose.

Based on genotoxicity findings, advise males with female partners of reproductive potential to use effective contraception during treatment with Deferiprone tablets and for at least 3 months after the last dose [see Nonclinical Toxicology (13.1)].

Safety and effectiveness of Deferiprone tablets have not been established in pediatric patients with chronic iron overload due to blood transfusions who are less than 8 years of age.

Clinical studies of Deferiprone did not include sufficient numbers of subjects aged 65 and over to determine whether they respond differently from younger subjects. Other reported clinical experience has not identified differences in responses between the elderly and younger patients.

No cases of acute overdose have been reported. There is no specific antidote to Deferiprone tablets overdose.

Neurological disorders such as cerebellar symptoms, diplopia, lateral nystagmus, psychomotor slowdown, hand movements and axial hypotonia have been observed in children treated with 2.5 to 3 times the recommended dose for more than one year. The neurological disorders progressively regressed after Deferiprone discontinuation. 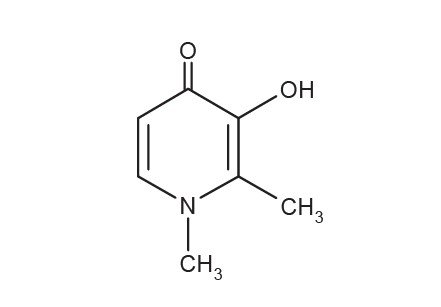 Deferiprone is a white crystalline powder. It is slightly soluble in deionized water and has a melting point range of 271°C - 273°C.

Deferiprone tablets, 1,000 mg are white to off-white, modified capsule shaped, biconvex, film coated tablet, debossed with 54 [score] 23 on one side and plain on the other. The tablets can be broken in half along the score line.

Deferiprone is a chelating agent with an affinity for ferric ions (iron III). Deferiprone binds with ferric ions to form neutral 3:1 (Deferiprone:iron) complexes that are stable at physiological pH.

No clinical studies were performed to assess the relationship between the dose of Deferiprone and the amount of iron eliminated from the body.

At the maximum approved recommended dose, Deferiprone does not prolong the QT interval to any clinically relevant extent.

The mean Cmax and AUC of Deferiprone was 20 mcg/mL and 50 mcg∙h/mL, respectively, in healthy subjects. The dose proportionality of Deferiprone over the approved recommended dosage range is unknown.

Deferiprone appeared in the blood within 5 to 10 minutes after oral administration. Peak serum concentration of Deferiprone was reached approximately 1 to 2 hours after a single dose.

No clinically significant differences in the pharmacokinetics of Deferiprone were observed following administration with food.

The elimination half-life of Deferiprone is approximately 2 hours.

Deferiprone is metabolized primarily by UGT1A6. The major metabolite of Deferiprone is the 3-O-glucuronide, which lacks iron binding capability.

Following oral administration, 75% to 90% of the administered dose was recovered in urine (primarily as metabolite) in the first 24 hours.

UGT1A6 Inhibitors: Phenylbutazone (UGT1A6 inhibitor) decreased glucuronidation of Deferiprone by up to 78%.

A fertility and early embryonic development study of Deferiprone was conducted in rats. Sperm counts, motility and morphology were unaffected by treatment with Deferiprone. There were no effects observed on male or female fertility or reproductive function at the highest dose which was 25% of the MRHD.

In a prospective, planned, pooled analysis of patients with thalassemia syndromes from several studies, the efficacy of Deferiprone was assessed in transfusion-dependent iron overload patients in whom previous iron chelation therapy had failed or was considered inadequate due to poor tolerance. The main criterion for chelation failure was serum ferritin > 2,500 mcg/L before treatment with Deferiprone. Deferiprone therapy (35-99 mg/kg/day) was considered successful in individual patients who experienced a ≥ 20% decline in serum ferritin within one year of starting therapy.

A small number of patients with thalassemia and iron overload were assessed by measuring the change in the number of milliseconds (ms) in the cardiac MRI T2* value before and after treatment with Deferiprone for one year. There was an increase in cardiac MRI T2* from a mean at baseline of 11.8 ± 4.9 ms to a mean of 15.1 ± 7.0 ms after approximately one year of treatment. The clinical significance of this observation is not known.

Deferiprone Tablets (three times a day) are white to off-white, modified capsule shaped, biconvex, film coated tablets, debossed with 54 [score] 23 on one side and plain on the other. They are provided in a 50 count, 150 count, and 300 count HDPE bottle with a child-resistant cap.

Store at 20° to 25°C (68° to 77°F) [see USP Controlled Room Temperature]. Keep the bottle tightly closed to protect from moisture.

Store in the originally supplied bottle, closed tightly to protect from moisture.

Advise patients to take the first dose of Deferiprone in the morning, the second dose at midday, and the third dose in the evening. Clinical experience suggests that taking Deferiprone tablets with meals may reduce nausea.

Advise females not to breastfeed during treatment with Deferiprone tablets and for at least 2 weeks after the last dose [see Use in Specific Populations (8.2)].

This Medication Guide has been approved by the U.S. Food and Drug Administration. 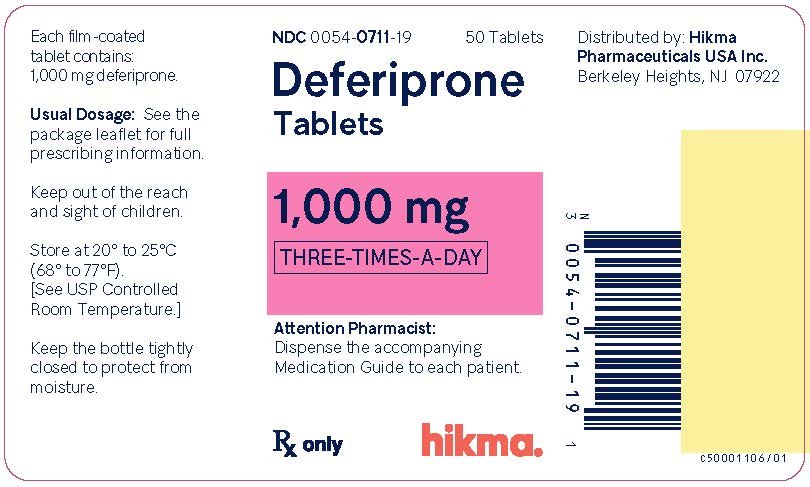 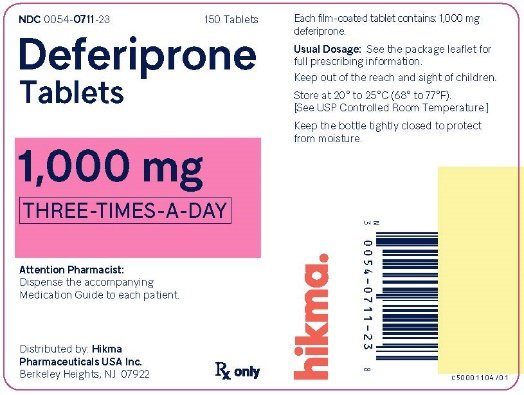 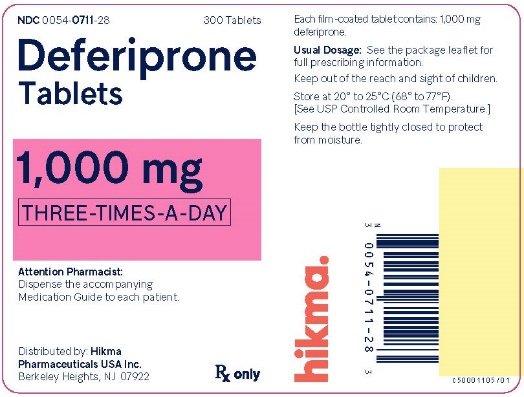 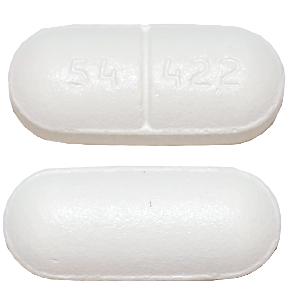