Ciprodex® is indicated for the treatment of infections caused by susceptible isolates of the designated microorganisms in the specific conditions listed below:

The recommended dosage regimen through tympanostomy tubes is as follows:

Ciprodex should be discontinued at the first appearance of a skin rash or any other sign of hypersensitivity. Serious and occasionally fatal hypersensitivity (anaphylactic) reactions, some following the first dose, have been reported in patients receiving systemic quinolones. Some reactions were accompanied by cardiovascular collapse, loss of consciousness, angioedema (including laryngeal, pharyngeal, or facial edema), airway obstruction, dyspnea, urticaria, and itching.

Prolonged use of Ciprodex may result in overgrowth of non-susceptible bacteria and fungi. If the infection is not improved after one week of treatment, cultures should be obtained to guide further treatment. If such infections occur, discontinue use and institute alternative therapy.

If otorrhea persists after a full course of therapy, or if two or more episodes of otorrhea occur within six months, further evaluation is recommended to exclude an underlying condition, such as cholesteatoma, foreign body, or a tumor.

In Phases II and III clinical trials, a total of 937 patients were treated with Ciprodex. This included 400 patients with acute otitis media with tympanostomy tubes (AOMT) and 537 patients with AOE. The reported adverse reactions are listed below:

The following adverse reactions occurred in 0.5% or more of the patients with non-intact tympanic membranes.

The following adverse reactions occurred in 0.4% or more of the patients with intact tympanic membranes.

The following adverse reactions were each reported in a single patient: ear discomfort; decreased hearing; and ear disorder (tingling).

The following adverse reactions have been identified during post approval use of Ciprodex. Because these reactions are reported voluntarily from a population of unknown size, it is not always possible to reliably estimate their frequency or establish a causal relationship to drug exposure. These reactions include auricular swelling, headache, hypersensitivity, otorrhea, skin exfoliation, rash erythematous, and vomiting.

There are no available data on Ciprodex use in pregnant women to evaluate for a drug-associated risk of major birth defects, miscarriage or adverse maternal, or fetal outcomes. Because of the minimal systemic absorption of ciprofloxacin and dexamethasone following topical otic administration of Ciprodex, this product is expected to be of minimal risk for maternal and fetal toxicity when administered to pregnant women [see Clinical Pharmacology (12.3)].

Animal reproduction studies have not been conducted with Ciprodex. Oral administration of ciprofloxacin during organogenesis at doses up to 100 mg/kg to pregnant mice and rats, and up to 30 mg/kg to pregnant rabbits did not cause fetal malformations (see Data). These doses were at least 200 times the recommended otic human dose (ROHD in mice, rats, and rabbits, respectively, based on body surface area (BSA). With dexamethasone, malformations have been observed in animal studies after ocular and systemic administration.

Developmental toxicology studies have been performed with ciprofloxacin in rats, mice, and rabbits. The doses used in these studies are, at a minimum, approximately 200 times greater than the recommended otic human dose based on body surface area. In rats and mice, oral doses up to 100 mg/kg administered during organogenesis (Gestation Days [GD], 6-17) were not associated with adverse developmental outcomes, including embryofetal toxicity or malformations. A 30 mg/kg oral dose was associated with suppression of maternal and fetal body weight gain, but fetal malformations were not observed. Intravenous administration of doses up to 20 mg/kg to pregnant rabbits was not maternally toxic and neither embryo-fetal toxicity nor fetal malformations were observed. To mitigate maternal toxicity in these studies, groups of rabbits received ciprofloxacin for a different 5 day dosing period covering organogenesis (GD 6-18).

Dexamethasone has been shown to be teratogenic in mice and rabbits following topical ophthalmic application. In a rat oral developmental toxicity study, no adverse effects were observed at 0.01 mg/kg/day (0.1 times the ROHD based on BSA), although embryotoxicity was observed at higher doses.

It is not known whether ciprofloxacin and dexamethasone are present in human milk following topical otic administration.

Systemically administered corticosteroids appear in human milk. Dexamethasone in breast milk could suppress growth, interfere with endogenous corticosteroid production, or cause other untoward effects. However, it is not known whether topical otic administration of Ciprodex could result in systemic absorption that is sufficient to produce detectable quantities of dexamethasone in human milk.

There are no data on the effects of ciprofloxacin or dexamethasone on milk production.

The developmental and health benefits of breastfeeding should be considered along with the mother’s clinical need for Ciprodex and any potential adverse effects on the breast-fed child from Ciprodex.

The safety and efficacy of Ciprodex have been established in pediatric patients 6 months and older (937 patients) in adequate and well-controlled clinical trials.

No clinically relevant changes in hearing function were observed in 69 pediatric patients (age 4 to 12 years) treated with Ciprodex and tested for audiometric parameters.

Due to the characteristics of this preparation, no toxic effects are to be expected with an otic overdose of this product.

Ciprofloxacin, a quinolone antimicrobial is available as the monohydrochloride monohydrate salt of 1-cyclopropyl-6-fluoro-1,4-dihydro-4-oxo-7-(1-piperazinyl)-3-quinoline carboxylic acid. The empirical formula is C17H18FN3O3·HCl·H2O. The molecular weight is 385.82 g/mol and the structural formula is: 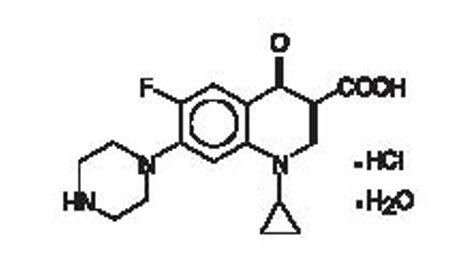 Dexamethasone has been added to aid in the resolution of the inflammatory response accompanying bacterial infection (such as otorrhea in pediatric patients with AOMT).

Mechanism of Action
The bactericidal action of ciprofloxacin results from interference with the enzyme, DNA gyrase, which is needed for the synthesis of bacterial DNA.

Antimicrobial Activity
Ciprofloxacin has been shown to be active against most isolates of the following microorganisms, both in vitro and clinically in otic infections [see Indications and Usage (1)].

Long-term carcinogenicity studies in mice and rats have been completed for ciprofloxacin. After daily oral doses of 750 mg/kg (mice) and 250 mg/kg (rats) were administered for up to 2 years, there was no evidence that ciprofloxacin had any carcinogenic or tumorigenic effects in these species. No long-term studies of Ciprodex have been performed to evaluate carcinogenic potential.

Long-term studies have not been performed to evaluate the carcinogenic potential of topical otic dexamethasone.

Dexamethasone has been tested for in vitro and in vivo genotoxic potential and shown to be positive in the following assays: chromosomal aberrations, sister-chromatid exchange in human lymphocytes, and micronuclei and sister-chromatid exchanges in mouse bone marrow. However, the Ames/Salmonella assay, both with and without S9 mix, did not show any increase in His+ revertants.

The effect of dexamethasone on fertility has not been investigated following topical otic application. However, the lowest toxic dose of dexamethasone identified following topical dermal application was 1.802 mg/kg in a 26-week study in male rats and resulted in changes to the testes, epididymis, sperm duct, prostate, seminal vesicle, Cowper's gland, and accessory glands. The relevance of this study for short-term topical otic use is unknown.

Guinea pigs dosed in the middle ear with Ciprodex for one month exhibited no drug-related structural or functional changes of the cochlear hair cells and no lesions in the ossicles.

Ciprodex (ciprofloxacin 0.3% and dexamethasone 0.1%) Sterile Otic Suspension is a white-to off-white suspension supplied as follows: 7.5 mL fill in a system consisting of a natural polyethylene bottle and natural plug, with a white polypropylene closure. Tamper evidence is provided with a shrink band around the closure and neck area of the package.

Advise the patient to read the FDA-approved patient labeling (Patient Information and Instructions for Use).

For Otic Use Only

Advise patients that Ciprodex is for otic use (ears) only. This product must not be used in the eye [see Dosage and Administration (2.2)].

Instruct patients to warm the bottle in their hand for one to two minutes prior to use and shake well immediately before using [see Dosage and Administration (2.1, 2.2)].

Advise patients to discontinue use immediately and contact their physician, if rash or allergic reaction occurs [see Warnings and Precautions (5.1)].

Advise patients to avoid contaminating the tip with material from the ear, fingers, or other sources [see Instructions for Use].

Advise patients that it is very important to use the eardrops for as long as their doctor has instructed, even if the symptoms improve [see Patient Information].

Advise patients to protect the product from light [see How Supplied/Storage and Handling (16)]. 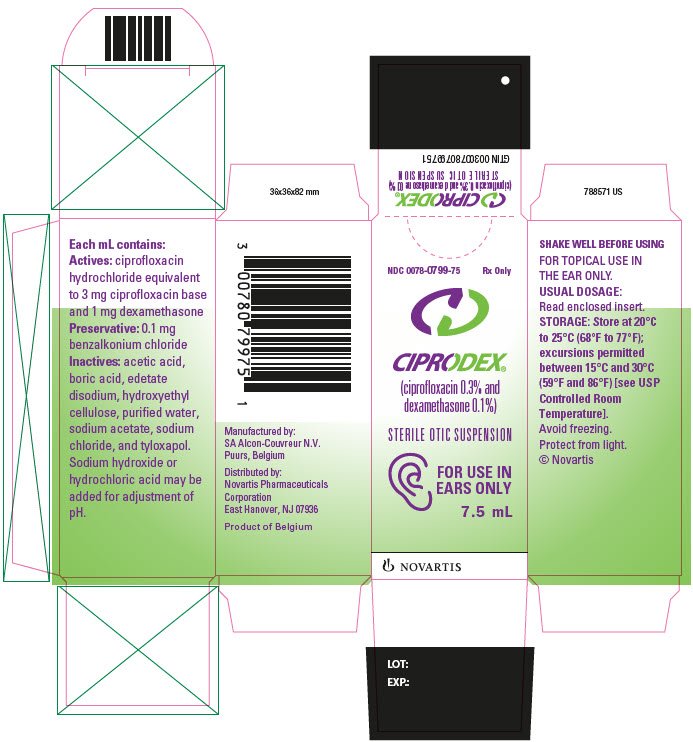