Ciprofloxacin, a fluoroquinolone, is available as the monohydrochloride monohydrate salt of 1-cyclopropyl-6-fluoro-1,4-dihydro-4-oxo-7-(1-piperazinyl)-3-quinolinecarboxylic acid. Its empirical formula is C17H18FN3O3•HCI•H2O and its chemical structure is as follows: 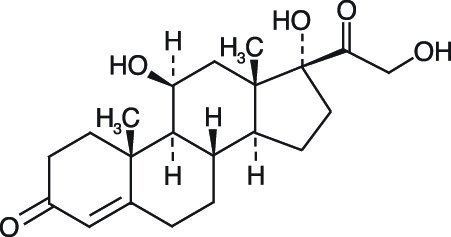 The plasma concentrations of ciprofloxacin were not measured following three drops of otic suspension administration because the systemic exposure to ciprofloxacin is expected to be below the limit of quantitation of the assay (0.05 μg/mL).

Preclinical studies have shown that CIPRO® HC OTIC was not toxic to the guinea pig cochlea when administered intratympanically twice daily for 30 days and was only weakly irritating to rabbit skin upon repeated exposure.

Hydrocortisone has been added to aid in the resolution of the inflammatory response accompanying bacterial infection.

Ciprofloxacin has been shown to be active against most strains of the following microorganisms, both in vitro and in clinical infections of acute otitis externa as described in the INDICATIONS AND USAGE section:

CIPRO® HC OTIC is indicated for the treatment of acute otitis externa in adult and pediatric patients, one year and older, due to susceptible strains of Pseudomonas aeruginosa, Staphylococcus aureus, and Proteus mirabilis.

CIPRO® HC OTIC is contraindicated in persons with a history of hypersensitivity to hydrocortisone, ciprofloxacin or any member of the quinolone class of antimicrobial agents. This nonsterile product should not be used if the tympanic membrane is known or suspected to be perforated. Use of this product is contraindicated in viral infections of the external canal including varicella and herpes simplex infections.

NOT FOR OPHTHALMIC USE. NOT FOR INJECTION.

CIPRO® HC OTIC should be discontinued at the first appearance of a skin rash or any other sign of hypersensitivity. Serious and occasionally fatal hypersensitivity (anaphylactic) reactions, some following the first dose, have been reported in patients receiving systemic quinolones. Serious acute hypersensitivity reactions may require immediate emergency treatment. The dropper cap contains natural rubber (latex) which may cause severe allergic reactions.

As with other antibiotic preparations, use of this product may result in overgrowth of nonsusceptible organisms, including fungi. If the infection is not improved after one week of therapy, cultures should be obtained to guide further treatment.

If rash or allergic reaction occurs, discontinue use immediately and contact your physician.

Avoid contaminating the dropper with material from the ear, fingers, or other sources.

Long-term carcinogenicity studies in mice and rats have been completed for ciprofloxacin. After daily oral doses of 750 mg/kg (mice) and 250 mg/kg (rats) were administered for up to 2 years, there was no evidence that ciprofloxacin had any carcinogenic or tumorigenic effects in these species. No long term studies of CIPRO® HC OTIC suspension have been performed to evaluate carcinogenic potential.

Fertility studies performed in rats at oral doses of ciprofloxacin up to 100 mg/kg/day revealed no evidence of impairment. This would be over 1000 times the maximum recommended clinical dose of ototopical ciprofloxacin based upon body surface area, assuming total absorption of ciprofloxacin from the ear of a patient treated with CIPRO® HC OTIC twice per day.

Long term studies have not been performed to evaluate the carcinogenic potential or the effect on fertility of topical hydrocortisone. Mutagenicity studies with hydrocortisone were negative.

Reproduction studies have been performed in rats and mice using oral doses of up to 100 mg/kg and IV doses up to 30 mg/kg and have revealed no evidence of harm to the fetus as a result of ciprofloxacin. In rabbits, ciprofloxacin (30 and 100 mg/kg orally) produced gastrointestinal disturbances resulting in maternal weight loss and an increased incidence of abortion, but no teratogenicity was observed at either dose. After intravenous administration of doses up to 20 mg/kg, no maternal toxicity was produced in the rabbit, and no embryotoxicity or teratogenicity was observed.

Ciprofloxacin is excreted in human milk with systemic use. It is not known whether ciprofloxacin is excreted in human milk following topical otic administration. Because of the potential for serious adverse reactions in nursing infants, a decision should be made whether to discontinue nursing or to discontinue the drug, taking into account the importance of the drug to the mother.

The safety and efficacy of CIPRO® HC OTIC have been established in pediatric patients 2 years and older (131 patients) in adequate and well-controlled clinical trials. Efficacy has been extrapolated for patients, age 1 year and above based on studies in adults and older pediatric patients.

In Phase 3 clinical trials, a total of 564 patients were treated with CIPRO® HC OTIC. Adverse events with at least remote relationship to treatment included headache (1.2%) and pruritus (0.4%). The following treatment-related adverse events were each reported in a single patient: migraine, hypesthesia, paresthesia, fungal dermatitis, cough, rash, urticaria, and alopecia.

The following reactions have been identified during post-approval use of CIPRO® HC OTIC in clinical practice. Because they are reported voluntarily from a population of unknown size, estimates of frequency cannot be made. The reactions, which have been chosen for inclusion due to either their seriousness, frequency of reporting, possible causal connection to CIPRO® HC OTIC, or a combination of these factors, include: dizziness, ear canal erythema, ear congestion, hypoacusis and medication residue.

For children (age 1 year and older) and adults, 3 drops of the suspension should be instilled into the affected ear twice daily for seven days. The suspension should be warmed by holding the bottle in the hand for 1-2 minutes to avoid the dizziness which may result from the instillation of a cold solution into the ear canal. The patient should lie with the affected ear upward and then the drops should be instilled. This position should be maintained for 30-60 seconds to facilitate penetration of the drops into the ear. Repeat, if necessary, for the opposite ear. Discard unused portion after therapy is completed.

CIPRO® HC OTIC is supplied as a white to off-white opaque suspension in a 10 mL bottle with a dropper dispenser.

Rx Only Alcon®
a Novartis company 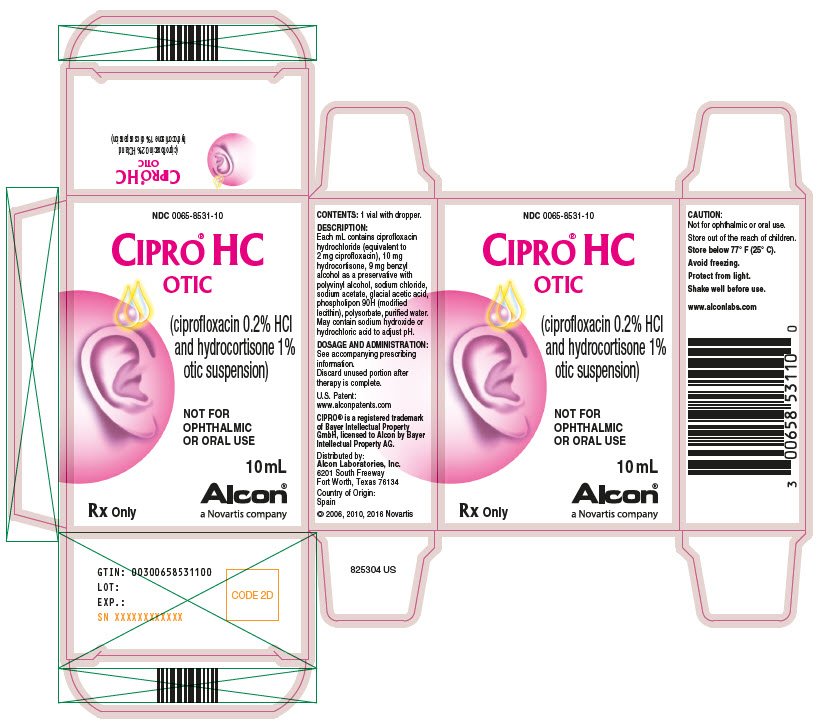