Amicar (aminocaproic acid) is 6-aminohexanoic acid, which acts as an inhibitor of fibrinolysis.

Amicar is soluble in water, acid, and alkaline solutions; it is sparingly soluble in methanol and practically insoluble in chloroform.

The fibrinolysis-inhibitory effects of Amicar appear to be exerted principally via inhibition of plasminogen activators and to a lesser degree through antiplasmin activity.

Renal excretion is the primary route of elimination. Sixty-five percent of the dose is recovered in the urine as unchanged drug and 11% of the dose appears as the metabolite adipic acid. Renal clearance (116 mL/min) approximates endogenous creatinine clearance. The total body clearance is 169 mL/min. The terminal elimination half-life for Amicar is approximately 2 hours.

Indications and Usage for Amicar

Amicar is useful in enhancing hemostasis when fibrinolysis contributes to bleeding. In life-threatening situations, transfusion of appropriate blood products and other emergency measures may be required.

Amicar should not be used when there is evidence of an active intravascular clotting process.

When there is uncertainty as to whether the cause of bleeding is primary fibrinolysis or disseminated intravascular coagulation (DIC), this distinction must be made before administering Amicar.

Platelet count is usually decreased in DIC but normal in primary fibrinolysis.

Protamine paracoagulation test is positive in DIC; a precipitate forms when protamine sulfate is dropped into citrated plasma. The test is negative in the presence of primary fibrinolysis.

The euglobulin clot lysis test is abnormal in primary fibrinolysis but normal in DIC.

Amicar must not be used in the presence of DIC without concomitant heparin.

In patients with upper urinary tract bleeding, Amicar administration has been known to cause intrarenal obstruction in the form of glomerular capillary thrombosis or clots in the renal pelvis and ureters. For this reason, Amicar should not be used in hematuria of upper urinary tract origin, unless the possible benefits outweigh the risk.

Rarely, skeletal muscle weakness with necrosis of muscle fibers has been reported following prolonged administration. Clinical presentation may range from mild myalgias with weakness and fatigue to a severe proximal myopathy with rhabdomyolysis, myoglobinuria, and acute renal failure. Muscle enzymes, especially creatine phosphokinase (CPK) are elevated. CPK levels should be monitored in patients on long-term therapy. Amicar administration should be stopped if a rise in CPK is noted. Resolution follows discontinuation of Amicar; however, the syndrome may recur if Amicar is restarted.

The possibility of cardiac muscle damage should also be considered when skeletal myopathy occurs. One case of cardiac and hepatic lesions observed in man has been reported. The patient received 2 g of aminocaproic acid every 6 hours for a total dose of 26 g. Death was due to continued cerebrovascular hemorrhage. Necrotic changes in the heart and liver were noted at autopsy.

Amicar inhibits both the action of plasminogen activators and to a lesser degree, plasmin activity. The drug should NOT be administered without a definite diagnosis and/or laboratory finding indicative of hyperfibrinolysis (hyperplasminemia).1 Inhibition of fibrinolysis by aminocaproic acid may theoretically result in clotting or thrombosis. However, there is no definite evidence that administration of aminocaproic acid has been responsible for the few reported cases of intravascular clotting which followed this treatment. Rather, it appears that such intravascular clotting was most likely due to the patient's preexisting clinical condition, e.g., the presence of DIC. It has been postulated that extravascular clots formed in vivo may not undergo spontaneous lysis as do normal clots.

The use of Amicar should be accompanied by tests designed to determine the amount of fibrinolysis present. There are presently available: (a) general tests such as those for the determination of the lysis of a clot of blood or plasma; and (b) more specific tests for the study of various phases of the fibrinolytic mechanisms. These latter tests include both semiquantitative and quantitative techniques for the determination of profibrinolysin, fibrinolysin, and antifibrinolysin.

Prolongation of the template bleeding time has been reported during continuous intravenous infusion of Amicar at dosages exceeding 24 g/day. Platelet function studies in these patients have not demonstrated any significant platelet dysfunction. However, in vitro studies have shown that at high concentrations (7.4 mMol/L or 0.97 mg/mL and greater) aminocaproic acid inhibits ADP and collagen-induced platelet aggregation, the release of ATP and serotonin, and the binding of fibrinogen to the platelets in a concentration-response manner. Following a 10 g bolus of Amicar, transient peak plasma concentrations of 4.6 mMol/L or 0.60 mg/mL have been obtained. The concentration of Amicar necessary to maintain inhibition of fibrinolysis is 0.99 mMol/L or 0.13 mg/mL. Administration of a 5 g bolus followed by 1 to 1.25 g/hr should achieve and sustain plasma levels of 0.13 mg/mL. Thus, concentrations which have been obtained in vivo clinically in patients with normal renal function are considerably lower than the in vitro concentrations found to induce abnormalities in platelet function tests. However, higher plasma concentrations of Amicar may occur in patients with severe renal failure.

Long-term studies in animals to evaluate the carcinogenic potential of Amicar and studies to evaluate its mutagenic potential have not been conducted. Dietary administration of an equivalent of the maximum human therapeutic dose of Amicar to rats of both sexes impaired fertility as evidenced by decreased implantations, litter sizes and number of pups born.

Amicar is generally well tolerated. The following adverse experiences have been reported:

Urogenital: BUN increased, renal failure. There have been some reports of dry ejaculation during the period of Amicar treatment. These have been reported to date only in hemophilia patients who received the drug after undergoing dental surgical procedures. However, this symptom resolved in all patients within 24 to 48 hours of completion of therapy.

A few cases of acute overdosage with Amicar administered intravenously have been reported. The effects have ranged from no reaction to transient hypotension to severe acute renal failure leading to death. One patient with a history of brain tumor and seizures experienced seizures after receiving an 8 gram bolus injection of Amicar. The single dose of Amicar causing symptoms of overdosage or considered to be life-threatening is unknown. Patients have tolerated doses as high as 100 grams while acute renal failure has been reported following a dose of 12 grams.

No treatment for overdosage is known, although evidence exists that Amicar is removed by hemodialysis and may be removed by peritoneal dialysis. Pharmacokinetic studies have shown that total body clearance of Amicar is markedly decreased in patients with severe renal failure.

An identical dosage regimen may be followed by administering Amicar Tablets or Amicar Oral Solution as follows:

Each round, white tablet, engraved with XP on one side and scored on the other with A to the left of the score and 10 on the right, contains 500 mg of aminocaproic acid.

Each oblong, white tablet, engraved with XP on one side and scored on the other with A to the left of the score and 20 on the right, contains 1000 mg of aminocaproic acid. 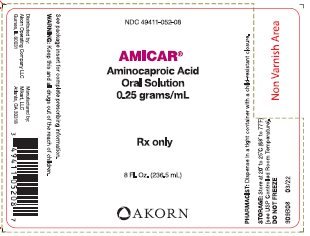 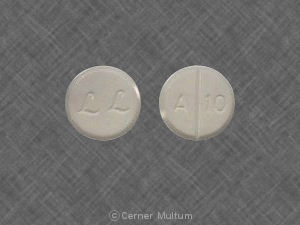