Indications and Usage for Agrylin

Agrylin is indicated for the treatment of patients with thrombocythemia, secondary to myeloproliferative neoplasms, to reduce the elevated platelet count and the risk of thrombosis and to ameliorate associated symptoms including thrombo-hemorrhagic events.

Dose Titration Based Upon Platelet Response

Continue the starting dose for at least one week and then titrate to reduce and maintain the platelet count below 600,000/µL, and ideally between 150,000/µL and 400,000/µL. The dose increment should not exceed 0.5 mg/day in any one week. Dosage should not exceed 10 mg/day or 2.5 mg in a single dose. Most patients will experience an adequate response at a dose of 1.5 to 3.0 mg/day. Monitor platelet counts weekly during titration then monthly or as necessary.

To prevent the occurrence of thrombocytopenia, monitor platelet counts every two days during the first week of treatment and at least weekly thereafter until the maintenance dosage is reached. Typically, platelet counts begin to respond within 7 to 14 days at the proper dosage. In the clinical trials, the time to complete response, defined as platelet count ≤600,000/µL, ranged from 4 to 12 weeks. In the event of dosage interruption or treatment withdrawal, the rebound in platelet count is variable, but platelet counts typically will start to rise within 4 days and return to baseline levels in one to two weeks, possibly rebounding above baseline values. Monitor platelet counts frequently.

Agrylin increases the QTc interval of the electrocardiogram and increases the heart rate in healthy volunteers [see Clinical Pharmacology (12.2)].

Do not use Agrylin in patients with known risk factors for QT interval prolongation, such as congenital long QT syndrome, a known history of acquired QTc prolongation, medicinal products that can prolong QTc interval and hypokalemia [see Drug Interactions (7.1)].

In patients with cardiac disease, use Agrylin only when the benefits outweigh the risks.

Cases of pulmonary hypertension have been reported in patients treated with Agrylin. Evaluate patients for signs and symptoms of underlying cardiopulmonary disease prior to initiating and during Agrylin therapy [see Adverse Reactions (6.1)].

Use of concomitant Agrylin and aspirin increased major hemorrhagic events in a postmarketing study. Assess the potential risks and benefits for concomitant use of Agrylin with aspirin, since bleeding risks may be increased. Monitor patients for bleeding, including those receiving concomitant therapy with other drugs known to cause bleeding (e.g., anticoagulants, PDE3 inhibitors, NSAIDs, antiplatelet agents, selective serotonin reuptake inhibitors) [see Drug Interactions (7.3), Clinical Pharmacology (12.3)].

Interstitial lung diseases (including allergic alveolitis, eosinophilic pneumonia and interstitial pneumonitis) have been reported to be associated with the use of Agrylin in post-marketing reports. Most cases presented with progressive dyspnea with lung infiltrations. The time of onset ranged from 1 week to several years after initiating Agrylin. If suspected, discontinue Agrylin and evaluate. Symptoms may improve after discontinuation [see Adverse Reactions (6)].

The most frequently reported adverse reactions to Agrylin (in 5% or greater of 942 patients with myeloproliferative neoplasms) in clinical trials were listed in Table 1.

Other less frequent adverse reactions (<1%) were:

The following adverse reactions have been identified during post-marketing use of Agrylin. Because these reactions are reported voluntarily from a population of uncertain size, it is not always possible to reliably estimate their frequency or establish a causal relationship to drug exposure.

Other adverse reactions in pediatric patients reported in spontaneous reports and literature reviews include:

Avoid use of Agrylin in patients taking medications that may prolong QT interval (including, but not limited to, chloroquine, clarithromycin, haloperidol, methadone, moxifloxacin, amiodarone, disopyramide, procainamide, and pimozide) [see Warnings and Precautions (5.1) and Clinical Pharmacology (12.2)].

Agrylin is a phosphodiesterase 3 (PDE3) inhibitor. Avoid use of drug products with similar properties such as inotropes and other PDE3 inhibitors (e.g., cilostazol, milrinone) [see Warnings and Precautions (5.1) and Clinical Pharmacology (12.2)].

Co-administration of single-dose or repeat-dose Agrylin and aspirin showed greater ex vivo anti-platelet aggregation effects than administration of aspirin alone [see Clinical Pharmacology (12.3)]. Results from an observational study in patients with essential thrombocythemia suggest the rate of major hemorrhagic events (MHEs) in patients treated with Agrylin is higher than in those subjects treated with another cytoreductive treatment. The majority of the major hemorrhagic events occurred in patients who were also receiving concomitant anti-aggregatory treatment (primarily, aspirin). Therefore, the potential risks of the concomitant use of Agrylin with aspirin should be assessed, particularly in patients with a high-risk profile for hemorrhage, before treatment is initiated [see Warnings and Precautions (5.3)].

CYP1A2 inhibitors: Agrylin and its active metabolite are primarily metabolized by CYP1A2. Drugs that inhibit CYP1A2 (e.g., fluvoxamine, ciprofloxacin) could increase the exposure of Agrylin. Monitor patients for cardiovascular events and titrate doses accordingly when CYP1A2 inhibitors are co-administered.

Thrombotic events, such as stroke, deep vein thrombosis, or myocardial infarction, can be complications of thrombocythemia. Thrombocythemia in pregnancy is associated with an increased risk for miscarriage, stillbirth, and other maternal outcomes, such as preeclampsia.

In a pre- and post-natal study conducted in female rats, anagrelide hydrochloride administered at oral doses of 60 mg/kg/day (58 times the maximum clinical dose based on body surface area) or higher during organogenesis through lactation produced delay or blockage of parturition, deaths of non-delivering pregnant dams and their fully developed fetuses, and increased mortality in the pups born.

In a placental transfer study, a single oral dose of [14C]-anagrelide hydrochloride (3 mg/kg) was administered to pregnant rats on gestation Day 17. Drug-related radioactivity was detected in maternal and fetal tissue.

There is no information regarding the presence of anagrelide in human milk, the effect on the breastfed child, or the effects on milk production. Anagrelide or its metabolites have been detected in the milk of lactating rats (see Data). Because of the potential for serious adverse reactions, including thrombocytopenia, in a breastfed child, advise patients that breastfeeding is not recommended during treatment with Agrylin, and for one week following the last dose.

In a rat milk secretion study, a single oral dose of [14C]-anagrelide hydrochloride (3 mg/kg) was administered to lactating female rats on postnatal Day 10. Drug-related radioactivity was detected in the maternal milk and blood.

There were no apparent trends or differences in the types of adverse events observed between the pediatric patients compared with those of the adult patients [see Adverse Reactions (6.1)].

Of the 942 subjects in clinical studies of Agrylin, 42.1% were 65 years and over, while 14.9% were 75 years and over. No overall differences in safety or effectiveness were observed between these subjects and younger subjects, and other reported clinical experience has not identified differences in response between the elderly and younger patients, but greater sensitivity of some older individuals cannot be ruled out.

At higher than recommended doses, Agrylin has been shown to cause hypotension. There have been postmarketing case reports of intentional overdose with Agrylin. Reported symptoms include sinus tachycardia and vomiting. Symptoms resolved with supportive management. Platelet reduction from Agrylin therapy is dose-related; therefore, thrombocytopenia, which can potentially cause bleeding, is expected from overdosage.

Agrylin (anagrelide hydrochloride) is a platelet-reducing agent. Its chemical name is 6,7-dichloro-1,5-dihydroimidazo[2,1-b]quinazolin-2(3H)-one monohydrochloride monohydrate. The molecular formula is C10H7Cl2N3O∙HCl∙H2O which corresponds to a molecular weight of 310.55. The structural formula is:

Anagrelide hydrochloride is an off-white powder. It is very slightly soluble in water and sparingly soluble in dimethyl sulfoxide and dimethylformamide.

In blood withdrawn from normal volunteers treated with anagrelide, a disruption was found in the postmitotic phase of megakaryocyte development and a reduction in megakaryocyte size and ploidy. At therapeutic doses, anagrelide does not produce significant changes in white cell counts or coagulation parameters, and may have a small, but clinically insignificant effect on red cell parameters. The active metabolite, 3-hydroxy anagrelide, has similar potency and efficacy to that of anagrelide in the platelet lowering effect; however, exposure (measured by plasma AUC) to 3-hydroxy anagrelide is approximately 2-fold higher compared to anagrelide. Anagrelide and 3-hydroxy anagrelide inhibit cyclic AMP phosphodiesterase 3 (PDE3) and 3-hydroxy anagrelide is approximately forty times more potent than anagrelide (IC50s = 0.9 and 36 nM, respectively). PDE3 inhibition does not alter platelet production. PDE3 inhibitors, as a class can inhibit platelet aggregation. However, significant inhibition of platelet aggregation is observed only at doses of anagrelide higher than those typically required to reduce platelet count. PDE3 inhibitors have cardiovascular (CV) effects including vasodilation, positive inotropy and chronotropy.

The effect of anagrelide dose (0.5 mg and 2.5 mg single doses) on the heart rate and QTc interval prolongation potential was evaluated in a double-blind, randomized, placebo- and active-controlled, cross-over study in 60 healthy adult men and women.

A dose-related increase in heart rate was observed, with the maximum increase occurring around the time of maximal drug concentration (0.5 – 4 hours). The maximum change in mean heart rate occurred at 2 hours after administration and was +7.8 beats per minute (bpm) for 0.5 mg and +29.1 bpm for 2.5 mg.

Dose proportionality has been found in the dose range 0.5 mg to 2.5 mg.

Following oral administration of Agrylin, at least 70% is absorbed from the gastrointestinal tract. In fasted subjects, anagrelide peak plasma concentrations occur within about 1 hour after administration.

Pediatric: Dose-normalized Cmax and AUC of anagrelide were higher in children and adolescents (age range 7 through 16 years) with essential thrombocythemia, by 17% and 56%, respectively, than in adult patients (19 through 57 years).

Renal Impairment: Pharmacokinetic study at a single dose of 1 mg anagrelide in subjects with severe renal impairment (creatinine clearance <30 mL/min) showed no significant effects on the pharmacokinetics of anagrelide.

Anagrelide hydrochloride was not mutagenic in the bacterial mutagenesis (Ames) assay or the mouse lymphoma cell (L5178Y, TK+/-) forward mutation assay, and was not clastogenic in the in vitro chromosome aberration assay using human lymphocytes or the in vivo mouse micronucleus test.

Anagrelide hydrochloride at oral doses up to 240 mg/kg/day (233 times the recommended human dose of 10 mg/day based on body surface area) had no effect on fertility and reproductive function of male rats. However, in fertility studies in female rats, oral doses of 30 mg/kg/day (29 times the recommended maximum human dose based on body surface area) or higher resulted in increased pre- and post-implantation loss and a decrease in the number of live embryos.

Patients were enrolled in clinical trials if their platelet count was ≥900,000/µL on two occasions or ≥650,000/µL on two occasions with documentation of symptoms associated with thrombocythemia. The mean duration of Agrylin therapy for ET, PV, CML, and OMPN patients was 65, 67, 40, and 44 weeks, respectively; 23% of patients received treatment for 2 years. Patients were treated with Agrylin starting at doses of 0.5-2.0 mg every 6 hours. The dose was increased if the platelet count was still high, but to no more than 12 mg each day. Efficacy was defined as reduction of platelet count to or near physiologic levels (150,000-400,000/µL). The criteria for defining subjects as "responders" were reduction in platelets for at least 4 weeks to ≤600,000/µL, or by at least 50% from baseline value. Subjects treated for less than 4 weeks were not considered evaluable. The results are depicted graphically below: 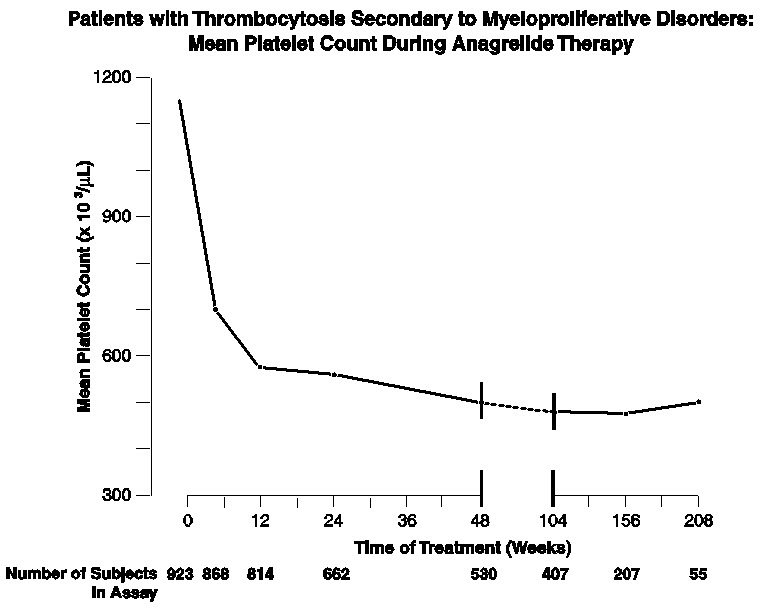 Agrylin was effective in phlebotomized patients as well as in patients treated with other concomitant therapies including hydroxyurea, aspirin, interferon, radioactive phosphorus, and alkylating agents.

Agrylin is available as:

Agrylin® is a registered trademark of Takeda Pharmaceuticals U.S.A., Inc. 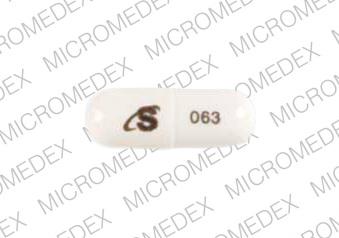