Smallpox is a serious and often deadly viral infection. It's contagious — meaning it spreads from person to person — and can cause permanent scarring. Sometimes, it causes disfigurement.

Smallpox has affected humans for thousands of years but was wiped out worldwide by 1980 thanks to smallpox vaccines. It's no longer found naturally in the world. The last case of naturally occurring smallpox was reported in 1977.

Samples of smallpox virus have been kept for research purposes. And scientific advances have made it possible to create smallpox in a lab. This has led to concerns that smallpox could someday be used as a bioweapon.

Vaccines can prevent smallpox, but because most people are unlikely to come in contact with smallpox naturally, routine vaccination isn't recommended. New antiviral medications can be used to treat people who develop smallpox.

The first symptoms of smallpox usually appear 12 to 14 days after you're exposed to the smallpox virus. However, the virus can be in your body from 7 to 19 days before you look or feel sick. This time is called the incubation period.

After the incubation period, sudden flu-like symptoms occur. These include:

A few days later, flat, red spots appear on the body. They may start in the mouth and on the tongue and then spread to the skin. The face, arms and legs are often affected first, followed by the torso, hands and feet.

Within a day or two, many of the spots turn into small blisters filled with clear fluid. Later, the blisters fill with pus. These sores are called pustules. Scabs form 8 to 9 days later and eventually fall off, leaving deep, pitted scars.

Smallpox can be spread from person to person when the rash appears and until the scabs fall off. 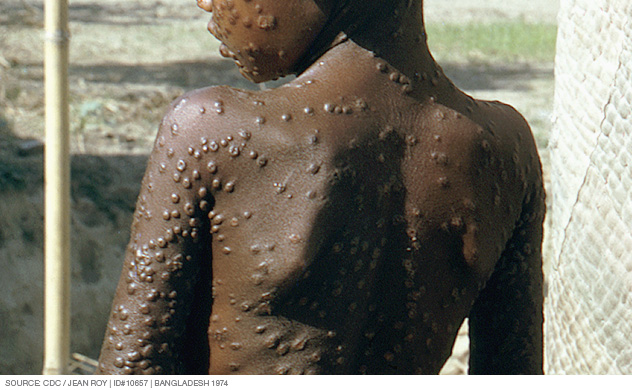 These are smallpox sores on the skin. This photograph was taken in Bangladesh in 1974.

Smallpox is caused by the variola virus. The virus can spread:

Most people who get smallpox survive. However, some rare types of smallpox are almost always deadly. These more-severe forms are most common in pregnant women and children.

If a smallpox outbreak happened, people with smallpox would be isolated to try to stop the spread of the virus. Anyone who had contact with someone who had smallpox would need a smallpox vaccine. A vaccine can protect you from getting sick or cause you to get less sick if you get smallpox. The vaccine should be given before or one week after exposure to the virus.

Smallpox vaccines also provide protection against other similar viral infections such as monkeypox and cowpox.

If you had the smallpox vaccine as a child, you have some level of protection against the smallpox virus. Full or partial immunity after a smallpox vaccine may last up to 10 years, and 20 years with booster shots. If an outbreak happened, people who got vaccinated as children would likely get a new vaccination if they were exposed to the virus.

If a smallpox outbreak happened today, most health care providers probably wouldn't recognize the virus in its early stages. This would allow the smallpox virus to spread.

Even one case of smallpox would be a public health emergency. The Centers for Disease Control and Prevention uses special labs to test tissue samples for smallpox. This test can tell for sure if a person has the virus.

If someone were infected with smallpox, new antiviral medications may be used.

It's unknown if these drugs work in a person with smallpox. Research continues to study other antiviral drugs to treat smallpox.