A patent foramen ovale (PFO) is a hole in the heart that didn't close the way it should after birth. The small flaplike opening is between the right and left upper chambers of the heart (atria).

It's unclear what causes the foramen ovale to stay open in some people, though genetics may play a role.

Understanding how the heart works may help you understand the role of the foramen ovale before birth.

Your heart has four chambers that pump blood:

Baby's heart in the womb

Because a baby in the womb isn't breathing, the lungs aren't working yet. That means there's no need to pump blood to the lungs. At this stage, blood bypasses the baby's lungs and uses a different path to move oxygen-rich blood from the mother to the baby's body.

The oxygen-rich blood travels from the placenta to the baby's body through the umbilical cord. In the baby's body, blood vessels connect to the umbilical cord. Oxygen-rich blood travels to the heart through the vein that drains blood from the body to the right atrium (inferior vena cava). That blood is directed across the foramen ovale and into the left atrium. From there the blood enters the left ventricle, which pumps it throughout the body.

When a baby's lungs begin working, blood flow through the heart changes. Now the oxygen-rich blood comes from the lungs and enters the left atrium. At this point, blood flow follows the normal route.

The pressure of the blood pumping through the heart usually forces the flap opening of the foramen ovale to close. In most people, the opening eventually closes, usually sometime during infancy. 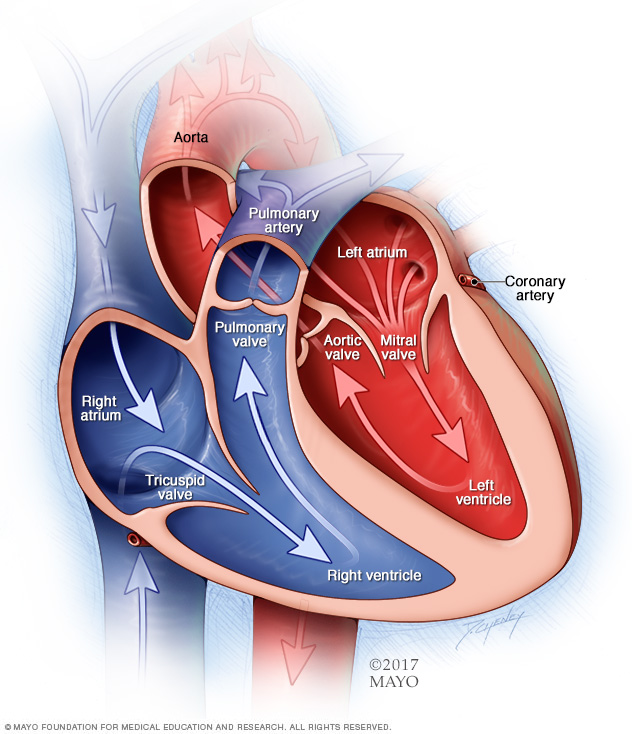 Chambers and valves of the heart

Generally, a patent foramen ovale (PFO) doesn't cause complications. Some people with a PFO may have other heart defects.

Possible complications of patent foramen ovale may include:

Some studies have found that PFOs are more common in people with unexplained strokes and migraines with aura. However, more research is needed. Usually, there are other reasons for these conditions, and it's just a coincidence the person also has a PFO. 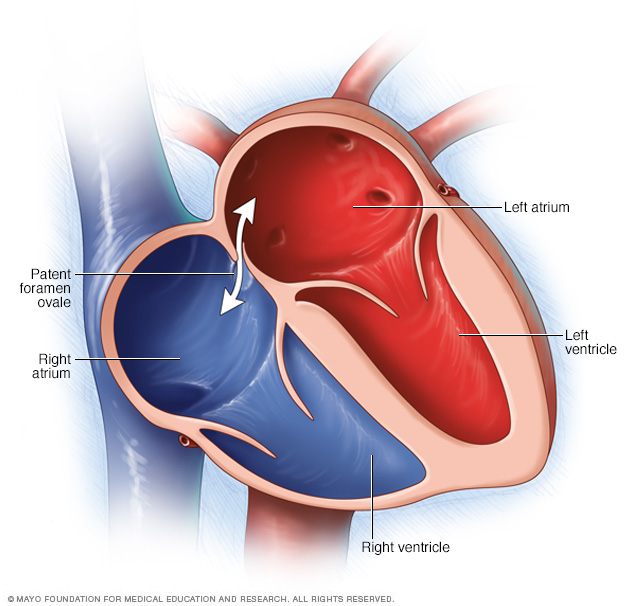 A patent foramen ovale is a small, flap-like opening in the wall between the right and left upper chambers of the heart. It usually causes no signs or symptoms and rarely requires treatment.

Usually a PFO is diagnosed when tests are done for another health concern. If your primary care doctor thinks you may have a PFO or if you've already been diagnosed with one, a doctor trained in heart conditions (cardiologist) may recommend some type of echocardiogram to get a closer look at how your heart works.

If you're diagnosed with a patent foramen ovale and you have had a stroke, your doctor may also refer you to a doctor trained in brain and nervous system conditions (neurologist).

In this common test, sound waves directed at your heart from a wandlike device (transducer) produce video images of your heart in motion. Doctors may use this test to diagnose a patent foramen ovale and detect other heart problems.

Variations of this procedure may be used to identify patent foramen ovale, including:

A patent foramen ovale may be difficult to confirm by transthoracic echocardiography. Your doctor may need to do a special type of echocardiogram called a transesophageal echocardiogram to get a closer look at the heart and blood flow through the heart.

Unlike a standard echocardiogram, in which the wand (transducer) is moved across your chest, a transesophageal echocardiogram uses a small transducer attached to the end of a probe. A doctor gently inserts the probe down the tube leading from your mouth to your stomach (esophagus). Before the procedure starts, your throat will be numbed, and you'll be given medication (sedative) to keep you comfortable.

A transesophageal echocardiogram is generally the most accurate available test to diagnose a patent foramen ovale.

Most people with a patent foramen ovale don't need treatment. If a PFO is found when an echocardiogram is done for other reasons, a procedure to close the opening usually isn't done.

However, your doctor may recommend a procedure to close the hole in your heart if you have low blood oxygen levels linked to the patent foramen ovale or if you've had an unexplained stroke.

Surgical or other procedures

Procedures to close a patent foramen ovale include:

If you know you have a patent foramen ovale, but don't have symptoms, you probably won't have any restrictions on your activities.

If you'll be traveling long distances, it's important to follow recommendations for preventing blood clots. If you're traveling by car, take breaks and go for short walks. On an airplane, be sure to drink plenty of fluids and walk around whenever it's safe to do so.

After a patent foramen ovale has been diagnosed, you'll likely have a lot of questions for your doctor. Some questions you may want to ask include: