Bile reflux occurs when bile — a digestive liquid produced in your liver — backs up (refluxes) into your stomach and, in some cases, into the tube that connects your mouth and stomach (esophagus).

Bile reflux may accompany the reflux of stomach acid (gastric acid) into your esophagus. Gastric reflux may lead to gastroesophageal reflux disease (GERD), a potentially serious problem that causes irritation and inflammation of esophageal tissue. 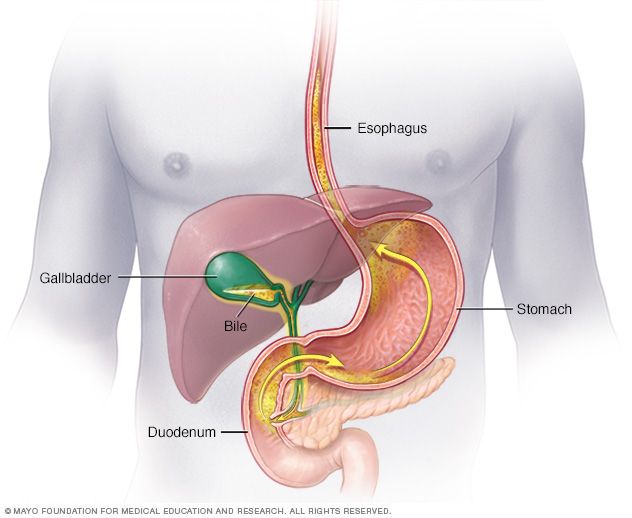 Bile is a digestive fluid produced by the liver and stored in the gallbladder. During bile reflux, digestive fluid backs up into the stomach and, in some cases, the esophagus.

Bile reflux can be difficult to distinguish from gastric acid reflux. The signs and symptoms are similar, and the two conditions may occur at the same time.

Bile reflux signs and symptoms include:

Make an appointment with your doctor if you frequently experience symptoms of reflux, or if you're losing weight without trying.

If you've been diagnosed with GERD but aren't getting enough relief from your medications, call your doctor. You may need additional treatment for bile reflux.

Bile is essential for digesting fats and for eliminating worn-out red blood cells and certain toxins from your body. Bile is produced in your liver and stored in your gallbladder.

Eating a meal that contains even a small amount of fat signals your gallbladder to release bile, which flows through a small tube into the upper part of your small intestine (duodenum).

Bile reflux into the stomach

Bile and food mix in the duodenum and enter your small intestine. The pyloric valve, a heavy ring of muscle located at the outlet of your stomach, usually opens only slightly — enough to release about an eighth of an ounce (about 3.75 milliliters) or less of liquefied food at a time, but not enough to allow digestive juices to reflux into the stomach.

In cases of bile reflux, the valve doesn't close properly, and bile washes back into the stomach. This can lead to inflammation of the stomach lining (bile reflux gastritis).

Bile reflux into the esophagus

What leads to bile reflux?

Bile reflux may be caused by:

Bile reflux gastritis has been linked to stomach cancer. The combination of bile reflux and acid reflux also increases the risk of the following complications:

A description of your symptoms and knowledge of your medical history is usually enough for your doctor to diagnose a reflux problem. But distinguishing between acid reflux and bile reflux is difficult and requires further testing.

You're also likely to have tests to check for damage to your esophagus and stomach, as well as for precancerous changes.

Lifestyle adjustments and medications can be very effective for acid reflux into the esophagus, but bile reflux is harder to treat. There is little evidence assessing the effectiveness of bile reflux treatments, in part because of the difficulty of establishing bile reflux as the cause of symptoms.

Doctors may recommend surgery if medications fail to reduce severe symptoms or there are precancerous changes in your stomach or esophagus.

Some types of surgery can be more successful than others, so be sure to discuss the pros and cons carefully with your doctor.

Unlike acid reflux, bile reflux seems unrelated to lifestyle factors. But because many people experience both acid reflux and bile reflux, your symptoms may be eased by lifestyle changes:

Many people with frequent stomach problems, including heartburn, use over-the-counter or alternative therapies for symptom relief. Remember that even natural remedies can have risks and side effects, including potentially serious interactions with prescription medications. Always do careful research and talk with your doctor before trying an alternative therapy.

Make an appointment with your doctor if you have signs or symptoms common to bile reflux. After your doctor's initial evaluation, you may be referred to a specialist in digestive disorders (gastroenterologist).

Here's some information to help you prepare for your appointment and what to expect from your doctor.

Don't hesitate to ask questions during your appointment. Some questions to ask your doctor include:

Your doctor is likely to ask you a number of questions. Being ready to answer them may give you time to go over points you want to spend more time on. You may be asked: