Anthrax is a rare but serious illness caused by a spore-forming bacterium, Bacillus anthracis. Anthrax mainly affects livestock and wild game. Humans can become infected through direct or indirect contact with sick animals.

There's no evidence that anthrax is transmitted from person to person, but it's possible that anthrax skin lesions may be contagious through direct contact or through contact with a contaminated object (fomite). Usually, anthrax bacteria enter the body through a wound in the skin. You can also become infected by eating contaminated meat or inhaling the spores.

Signs and symptoms, which depend on how you're infected, can include skin sores, vomiting and shock. Prompt treatment with antibiotics can cure most anthrax infections. Inhaled anthrax is more difficult to treat and can be fatal.

Anthrax is very rare in the developed world. However, the illness remains a concern because the bacteria have been used in bioterrorism attacks in the United States.

There are four common routes of anthrax infection, each with different signs and symptoms. In most cases, symptoms develop within six days of exposure to the bacteria. However, it's possible for inhalation anthrax symptoms to take more than six weeks to appear.

A skin-related (cutaneous) anthrax infection enters your body through your skin, usually through a cut or other sore. It's by far the most common route of the disease. It's also the mildest. With appropriate treatment, cutaneous anthrax is seldom fatal. Signs and symptoms include:

A gastrointestinal anthrax infection results from eating undercooked meat from an infected animal. It can affect your gastrointestinal tract from your throat to your colon. Signs and symptoms include:

Inhalation anthrax develops when you breathe in anthrax spores. It's the most deadly form of the disease, and is often fatal, even with treatment. Initial signs and symptoms include:

This recently identified route of anthrax infection has so far been reported only in Europe. It's contracted through injecting illegal drugs. Initial signs and symptoms include:

Many common illnesses start with symptoms that resemble the flu. The chances that your sore throat and aching muscles are due to anthrax are extremely small.

If you think you may have been exposed — for example, if you work in an environment where anthrax is likely to occur — see a doctor immediately for evaluation and care. If you develop signs and symptoms of the disorder after exposure to animals or animal products in parts of the world where anthrax is common, seek prompt medical attention. Early diagnosis and treatment are crucial. 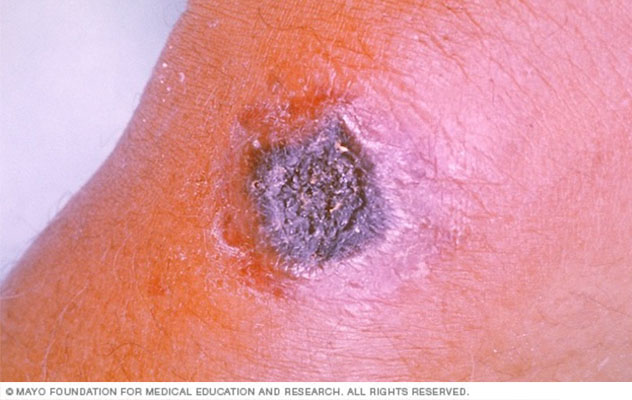 You can contract anthrax when spores penetrate your skin, usually through an open wound. The infection begins as a raised, sometimes itchy, bump resembling an insect bite. But within a day or two, the bump develops into an open, usually painless sore with a black center. 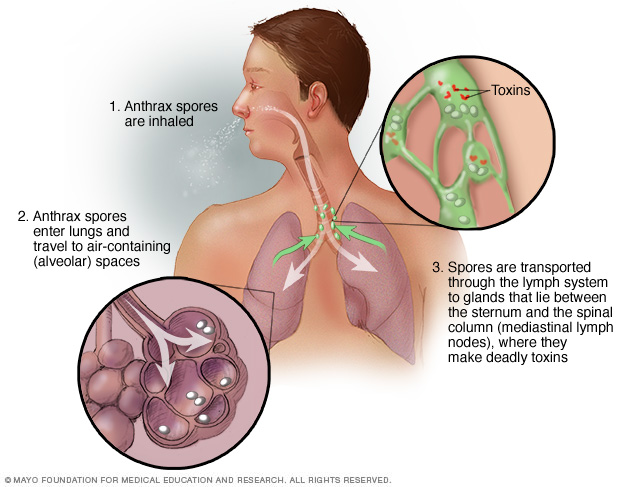 This illustration shows how the spores that cause inhalation anthrax — the most deadly form of anthrax infection — enter and affect the body.

Anthrax spores are formed by anthrax bacteria that occur naturally in soil in most parts of the world. The spores can remain dormant for years until they find their way into a host. Common hosts for anthrax include wild or domestic livestock, such as sheep, cattle, horses and goats.

Although rare in the United States, anthrax is still common throughout the developing world, in places such as Central America and South America, sub-Saharan Africa, Central Asia and southwestern Asia, southern Europe and Eastern Europe, and the Caribbean.

Most human cases of anthrax occur as a result of exposure to infected animals or their meat or hides. In the United States, a few people have developed anthrax while making traditional African drums from the skins of infected animals.

One of the few known instances of nonanimal transmission was a bioterrorism attack that occurred in the United States in 2001. Twenty-two people developed anthrax after being exposed to spores sent through the mail, and five of those infected died.

To contract anthrax, you must come in direct contact with anthrax spores. This is more likely if you:

The most serious complications of anthrax include:

To prevent infection after being exposed to anthrax spores, the Centers for Disease Control and Prevention recommends:

An anthrax vaccine is available for certain groups of people. The vaccine doesn't contain live bacteria and can't lead to infection. However, the vaccine can cause side effects, ranging from soreness at the injection site to more-serious allergic reactions.

The vaccine isn't intended for the general public. Instead, it's reserved for military personnel, scientists working with anthrax and people in other high-risk professions.

If you live or travel in a country where anthrax is common and herd animals aren't routinely vaccinated, avoid contact with livestock and animal skins as much as possible. Also avoid eating meat that hasn't been properly cooked.

Even in developed countries, it's important to handle any dead animal with care and to take precautions when working with or processing imported hides, fur or wool.

Your doctor will ask you what kind of work you do, along with other questions to determine the likelihood of your having been exposed to anthrax. He or she will first want to rule out other, more-common conditions that may be causing your signs and symptoms, such as flu (influenza) or pneumonia.

You may have a rapid flu test to quickly diagnose a case of influenza. If other tests are negative, you may have further tests to look specifically for anthrax, such as:

The standard treatment for anthrax is an antibiotic such as ciprofloxacin (Cipro), doxycycline (Vibramycin) or levofloxacin. Which single antibiotic or combination of antibiotics, and the length of treatment, will be most effective for you depends on how you were infected with anthrax, your age, your overall health and other factors. Treatment is most effective when started as soon as possible.

Since the 2001 attacks in the United States, researchers have developed antitoxin therapies — raxibacumab and obiltoxaximab — for inhalation anthrax. Instead of going after the bacteria that causes the disease, these medications help eliminate the toxins caused by the infection. Anthrax immunoglobulin also may be used to neutralize the toxins. These medications are given in addition to antibiotics and are available to doctors through the U.S. Centers for Disease Control and Prevention.

Some cases of injection anthrax have been successfully treated with surgical removal of infected tissue.

Although some cases of anthrax respond to antibiotics, advanced inhalation anthrax may not. By the later stages of the disease, the bacteria have often produced more toxins than drugs can eliminate.

Along with antibiotics, people with anthrax may be treated with intensive supportive care including ventilators, fluids and medicines to tighten blood vessels and raise blood pressure (vasopressors).

Symptoms of anthrax often come on suddenly and can be very serious. If you know you've been exposed to anthrax or if you develop symptoms after a possible exposure, immediately go to the emergency room.

If you have time before you go: