What are Colon Polyps?

Colon polyps are growths of tissue inside the large intestine, also called the colon. Some polyps are mushroom-shaped protrusions on the end of a stalk. Others appear as bumps that lie flat against the intestinal wall. 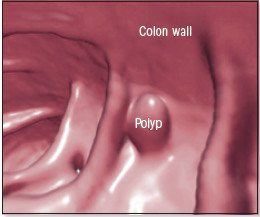 There are several types of polyps. Most are noncancerous (benign), but one type, the adenomatous polyp, is associated with changes (called mutations) in the DNA of the lining of the colon. These mutations can progress into colon cancer. The larger the polyp, the greater the chance that it contains cancerous cells.

Some people are born with a genetic tendency to develop multiple polyps. Inherited conditions such as familial adenomatous polyposis and Gardner's syndrome can cause hundreds of polyps to grow in the colon and rectum. Without surgery to remove the affected section of the intestine, it is almost certain that at least one of these polyps will turn into cancer by middle age. These two conditions are rare.

Many times, people are not aware they have colon polyps because there are no symptoms. Larger growths can bleed, causing blood in the stool. Sometimes bleeding polyps can cause fatigue and other symptoms of anemia (low levels of red blood cells). On rare occasions, a large polyp can cause diarrhea or secretion of large amounts of potassium. This can cause marked fatigue and muscle weakness.

Your doctor may use one or more of the following tests to determine whether you have colon polyps: 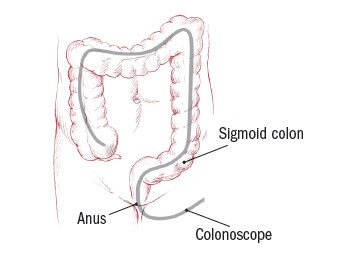 If a polyp is not removed, it will continue to grow larger. It usually takes several years for a polyp to change to a cancer. However, some polyps have malignant cells even though they are small. About one-third of adenomatous polyps will progress to cancer in three to five years if undetected or ignored.

The danger from polyps is that most cases of colon cancer spring from these growths. You can lower your chances of developing cancerous polyps in the following ways:

In addition, some research suggests these measures may help decrease the risk of colon cancer:

Women who take hormones after menopause have a lower risk of colon cancer. However, long term use of estrogen and progesterone after menopause should not be used for this purpose.

Because the risk of colon cancer increases with age, people age 50 and older should have periodic screening for early detection of polyps and colon cancer. Options for screening include:

If you have a hereditary condition that causes polyps to overgrow in the large intestine, you should begin frequent examinations at puberty. Your doctor may advise complete removal of the colon because there is a high likelihood of developing colon cancer by age 40. The other option is frequent screening with colonoscopy. How often you will need to have this done depends upon your age and what was seen on your last colonoscopy.

Often, the doctor can remove polyps during a colonoscopy. This is done by cutting the polyp from the wall of the colon using an electrical current passed through a wire loop at the end of the colonoscope. Sometimes, open surgery through the abdomen is necessary to remove a very large polyp. For cancerous polyps, surrounding tissue or a section of the colon may be removed as well. 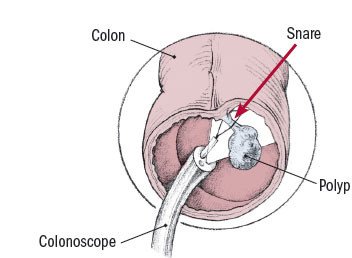 When To Call A Professional

You should call immediately for advice if you develop rectal bleeding. You also should have routine colon examinations starting at age 50. People with a family history of colon cancer at an early age, familial adenomatous polyposis, or Gardner's syndrome should begin screening earlier.

Polyps are common. But less than 1% of all polyps ever become cancerous. By removing polyps, the risk is even lower. Survival depends on the stage of cancer. If the cancerous cells are confined to a polyp or they have not grown deep into the outer layer of the colon, the prognosis is excellent. Colon cancer that spreads beyond the colon is associated with a lower risk of long term cancer-free survival.