Published as part of a U.S. Food and Drug Administration and Drugs.com partnership to protect and promote your health

Don't Get Burned: Stay Away From Ear Candles

A lit "candle" that can drip hot wax into your ear, usually as you lie on your side.

Sound dangerous? The Food and Drug Administration (FDA) thinks so, and is warning consumers to steer clear of products being sold as ear candles.

These "candles"—hollow cones that are about 10 inches long and made from a fabric tube soaked in beeswax, paraffin, or a mixture of the two—are being marketed as treatments for a variety of conditions. These conditions include ear wax buildup, sinus infections, hearing loss, headaches, colds, flu, and sore throats.

Marketers of ear candles claim that warmth created by the lit device produces suction that draws wax and other impurities out of the ear canal.

"Some ear candles are offered as products that purify the blood, strengthen the brain, or even 'cure' cancer," says Eric Mann, M.D., Ph.D., clinical deputy director of FDA's Division of Ophthalmic, Neurological, and Ear, Nose, and Throat Devices.

He adds that some firms claim the candles are appropriate for use on children.

But FDA warns that ear candles can cause serious injuries, even when used in accordance to manufacturers' directions. "Also," says Mann, "FDA believes that there is no valid scientific evidence for any medical benefit from their use."

Burns and Other Risks

Even many promoters of ear candles warn potential users to have the procedure done by an experienced "candler," and to not use the candles on themselves.

Ear candling involves placing the candle in the outer ear, usually while the recipient lies on his or her side. It is also done with the recipient sitting upright.

Often, before being lit, the candle is placed through a hole located in the center of a plate. The plate is supposed to protect against hot wax or ash coming down the side of the device and onto the recipient.

FDA and the Canadian health regulatory agency Health Canada have acted against manufacturers of ear candles. These actions have included import alerts, seizures, injunctions, and warning letters. FDA import alerts identify products that are suspected of violating the law so that agency field personnel and U.S. Customs and Border Protection staff can stop these entries at the border prior to distribution in the United States.

In February 2010, FDA issued warning letters to three large manufacturers of ear candles. These firms were informed that FDA had determined that there was no agency approval or clearance, no manufacturing facility registration or device listing, and no adverse-event reporting systems in place in regard to their ear candles.

FDA will continue to take enforcement action when appropriate.

Claims that ear candling is appropriate for kids have caused great concern at FDA. "Children of any age, including babies, are at increased risk for injuries and complications if they are exposed to ear candles," says Mann.

He adds that small children and infants may move while the device is being used, increasing the likelihood of wax burns and ear candle wax plugging the ear canal. "Also, their smaller ear canal size may make children more susceptible than adults to injuries from ear candles," he says.

Since FDA views ear candles as medical devices, manufacturers seeking approval to sell them must submit evidence to FDA that the products are safe and effective.

Over the past decade, FDA has received reports of burns, punctured eardrums, and blockage of the ear canal which required outpatient surgery from the use of ear candles.

In its testing, Health Canada found that ear candles produce no measurable effect in the ear and have no therapeutic value.

And in a survey published in 1996, the medical journal Laryngoscope reported 13 cases of burns of the ear, seven cases of ear canal blockage due to wax, and one case of a punctured eardrum.

That study also reported that ear candles produced no measurable vacuum pressure or suction on a model of the ear, and that burning ear candles dripped candle wax onto the eardrum of test subjects and of the ear model.

This article appears on FDA's Consumer Updates page, which features the latest on all FDA-regulated products. 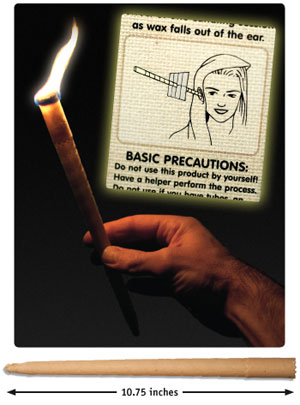