Zarontin (ethosuximide) is an anticonvulsant succinimide, chemically designated as alpha-ethyl-alpha-methyl-succinimide, with the following structural formula:

Ethosuximide suppresses the paroxysmal three cycle per second spike and wave activity associated with lapses of consciousness which is common in absence (petit mal) seizures. The frequency of epileptiform attacks is reduced, apparently by depression of the motor cortex and elevation of the threshold of the central nervous system to convulsive stimuli.

Indications and Usage for Zarontin

Zarontin is indicated for the control of absence (petit mal) epilepsy.

Ethosuximide should not be used in patients with a history of hypersensitivity to succinimides.

Drug-induced immune thrombocytopenia (DITP) has been reported with ethosuximide. In the reported cases, the onset of symptoms occurred 1 to 3 weeks after initiation of ethosuximide; one patient had recurrence of symptoms within 1 day of a subsequent re-challenge with the drug. In those cases in which the platelet count was specified, the nadir was 2,000 and 3,000/mm3. When DITP is suspected, discontinue Zarontin, monitor serial platelet counts, and treat as appropriate. If possible, assess the presence of drug-dependent antiplatelet antibodies. Avoid future use of Zarontin in patients with history of ethosuximide-induced DITP.

Effects on Liver and Kidneys

Ethosuximide is capable of producing morphological and functional changes in the animal liver. In humans, abnormal liver and renal function studies have been reported. Ethosuximide should be administered with extreme caution to patients with known liver or renal disease. Periodic urinalysis and liver function studies are advised for all patients receiving the drug.

Cases of systemic lupus erythematosus have been reported with the use of ethosuximide. The physician should be alert to this possibility.

Pooled analyses of 199 placebo-controlled clinical trials (mono- and adjunctive therapy) of 11 different AEDs showed that patients randomized to one of the AEDs had approximately twice the risk (adjusted Relative Risk 1.8, 95% CI:1.2, 2.7) of suicidal thinking or behavior compared to patients randomized to placebo. In these trials, which had a median treatment duration of 12 weeks, the estimated incidence rate of suicidal behavior or ideation among 27,863 AED-treated patients was 0.43%, compared to 0.24% among 16,029 placebo-treated patients, representing an increase of approximately one case of suicidal thinking or behavior for every 530 patients treated. There were four suicides in drug-treated patients in the trials and none in placebo-treated patients, but the number is too small to allow any conclusion about drug effect on suicide.

The risk of suicidal thoughts or behavior was generally consistent among drugs in the data analyzed. The finding of increased risk with AEDs of varying mechanisms of action and across a range of indications suggests that the risk applies to all AEDs used for any indication. The risk did not vary substantially by age (5–100 years) in the clinical trials analyzed.

Table 1 shows absolute and relative risk by indication for all evaluated AEDs.

Patients, their caregivers, and families should be informed that AEDs increase the risk of suicidal thoughts and behavior and should be advised of the need to be alert for the emergence or worsening of the signs and symptoms of depression, any unusual changes in mood or behavior, or the emergence of suicidal thoughts, behavior, or thoughts about self-harm. Behaviors of concern should be reported immediately to healthcare providers.

Serious dermatologic reactions, including Stevens-Johnson syndrome (SJS), have been reported with ethosuximide treatment. SJS can be fatal. The onset of symptoms is usually within 28 days, but can occur later. Zarontin should be discontinued at the first sign of a rash, unless the rash is clearly not drug-related. If signs or symptoms suggest SJS, use of this drug should not be resumed and alternative therapy should be considered.

Drug Reaction with Eosinophilia and Systemic Symptoms (DRESS), also known as multi organ hypersensitivity, has occurred with Zarontin. Some of these events have been fatal or life-threatening. DRESS typically, although not exclusively, presents with fever, rash, lymphadenopathy and/or facial swelling, in association with other organ system involvement, such as hepatitis, nephritis, hematologic abnormalities, myocarditis, or myositis, sometimes resembling an acute viral infection. Eosinophilia is often present. This disorder is variable in its expression, and other organ systems not noted here may be involved. It is important to note that early manifestations of hypersensitivity (e.g. fever, lymphadenopathy) may be present even though rash is not evident. If such signs or symptoms are present, the patient should be evaluated immediately. Zarontin should be discontinued if an alternative etiology for the signs or symptoms cannot be established.

Cases of birth defects have been reported with ethosuximide. The reports suggesting an elevated incidence of birth defects in children of drug-treated epileptic women cannot be regarded as adequate to prove a definite cause and effect relationship. There are intrinsic methodological problems in obtaining adequate data on drug teratogenicity in humans; the possibility also exists that other factors, e.g., genetic factors or the epileptic condition itself, may be more important than drug therapy in leading to birth defects. The great majority of mothers on anticonvulsant medication deliver normal infants. It is important to note that anticonvulsant drugs should not be discontinued in patients in whom the drug is administered to prevent major seizures because of the strong possibility of precipitating status epilepticus with attendant hypoxia and threat to life. In individual cases where the severity and frequency of the seizure disorder are such that the removal of medication does not pose a serious threat to the patient, discontinuation of the drug may be considered prior to and during pregnancy, although it cannot be said with any confidence that even minor seizures do not pose some hazard to the developing embryo or fetus.

The prescribing physician will wish to weigh these considerations in treating or counseling epileptic women of childbearing potential.

Ethosuximide, when used alone in mixed types of epilepsy, may increase the frequency of grand mal seizures in some patients.

As with other anticonvulsants, it is important to proceed slowly when increasing or decreasing dosage, as well as when adding or eliminating other medication. Abrupt withdrawal of anticonvulsant medication may precipitate absence (petit mal) status.

Ethosuximide may impair the mental and/or physical abilities required for the performance of potentially hazardous tasks such as driving a motor vehicle or other such activity requiring alertness; therefore, the patient should be cautioned accordingly.

Patients taking ethosuximide should be advised of the importance of adhering strictly to the prescribed dosage regimen.

Patients should be instructed to promptly contact their physician when they develop signs and/or symptoms suggesting an infection (e.g., sore throat, fever).

Patients, their caregivers, and families should be counseled that AEDs, including Zarontin, may increase the risk of suicidal thoughts and behavior and should be advised of the need to be alert for the emergence or worsening of symptoms of depression, any unusual changes in mood or behavior, or the emergence of suicidal thoughts, behavior, or thoughts about self-harm. Behaviors of concern should be reported immediately to healthcare providers.

Patients should be encouraged to enroll in the North American Antiepileptic Drug (NAAED) Pregnancy Registry if they become pregnant. This Registry is collecting information about the safety of antiepileptic drugs during pregnancy. To enroll, patients can call the toll free number 1-888-233-2334 (see PRECAUTIONS: Pregnancy section).

Since Zarontin (ethosuximide) may interact with concurrently administered antiepileptic drugs, periodic serum level determinations of these drugs may be necessary (e.g., ethosuximide may elevate phenytoin serum levels and valproic acid has been reported to both increase and decrease ethosuximide levels).

To provide information regarding the effects of in utero exposure to Zarontin, physicians are advised to recommend that pregnant patients taking Zarontin enroll in the (NAAED) Pregnancy Registry. This can be done by calling the toll free number 1-888- 233-2334, and must be done by patients themselves. Information on the registry can also be found at the website: http://www.aedpregnancyregistry.org/.

Safety and effectiveness in pediatric patients below the age of 3 years have not been established. (See DOSAGE AND ADMINISTRATION section.)

Gastrointestinal System: Gastrointestinal symptoms occur frequently and include anorexia, vague gastric upset, nausea and vomiting, cramps, epigastric and abdominal pain, weight loss, and diarrhea. There have been reports of gum hypertrophy and swelling of the tongue.

Hemopoietic System: Hemopoietic complications associated with the administration of ethosuximide have included leukopenia, agranulocytosis, pancytopenia, with or without bone marrow suppression, eosinophilia, and thrombocytopenia (see WARNINGS).

Psychiatric or psychological aberrations associated with ethosuximide administration have included disturbances of sleep, night terrors, inability to concentrate, and aggressiveness.

These effects may be noted particularly in patients who have previously exhibited psychological abnormalities. There have been rare reports of paranoid psychosis, increased libido, and increased state of depression with overt suicidal intentions.

Integumentary System: Dermatologic manifestations which have occurred with the administration of ethosuximide have included urticaria, pruritic erythematous rashes, Stevens-Johnson syndrome, and hirsutism.

Acute overdoses may produce nausea, vomiting, and CNS depression including coma with respiratory depression. A relationship between ethosuximide toxicity and its plasma levels has not been established. The therapeutic range of serum levels is 40 mcg/mL to 100 mcg/mL, although levels as high as 150 mcg/mL have been reported without signs of toxicity.

Treatment should include emesis (unless the patient is or could rapidly become obtunded, comatose, or convulsing) or gastric lavage, activated charcoal, cathartics, and general supportive measures. Hemodialysis may be useful to treat ethosuximide overdose. Forced diuresis and exchange transfusions are ineffective.

Zarontin is administered by the oral route. The initial dose for patients 3 to 6 years of age is one teaspoonful (250 mg) per day; for patients 6 years of age and older, 2 teaspoonfuls (500 mg) per day. The dose thereafter must be individualized according to the patient's response. Dosage should be increased by small increments. One useful method is to increase the daily dose by 250 mg every four to seven days until control is achieved with minimal side effects. Dosages exceeding 1.5 g daily, in divided doses, should be administered only under the strictest supervision of the physician. The optimal dose for most pediatric patients is 20 mg/kg/day. This dose has given average plasma levels within the accepted therapeutic range of 40 to 100 mcg/mL. Subsequent dose schedules can be based on effectiveness and plasma level determinations.

Zarontin may be administered in combination with other anticonvulsants when other forms of epilepsy coexist with absence (petit mal). The optimal dose for most pediatric patients is 20 mg/kg/day.

Each 5 mL of oral solution contains 250 mg ethosuximide in a raspberry flavored base.

What is the most important information I should know about Zarontin?

Do not stop taking Zarontin without first talking to your healthcare provider.

Zarontin can cause serious side effects, including:

Who should not take Zarontin?

What should I tell my healthcare provider before taking Zarontin?

Before you take Zarontin, tell your healthcare provider if you:

Know the medicines you take. Keep a list of them with you to show your healthcare provider and pharmacist when you get a new medicine.

How should I take Zarontin?

What should I avoid while taking Zarontin?

What are the possible side effects of Zarontin?

Zarontin may cause other serious side effects, including:

Call your healthcare provider right away, if you have any of the symptoms listed above.

The most common side effects of Zarontin include

Tell your healthcare provider about any side effect that bothers you or that does not go away.

These are not all the possible side effects with Zarontin. For more information, ask your healthcare provider or pharmacist.

Call your doctor for medical advice about side effects. You may report side effects to FDA at 1-800-FDA-1088.

How should I store Zarontin?

Keep Zarontin and all medicines out of the reach of children.

Medicines are sometimes prescribed for purposes other than those listed in a Medication Guide. Do not use Zarontin for a condition for which it was not prescribed. Do not give Zarontin to other people, even if they have the same condition. It may harm them.

What are the ingredients in Zarontin?

This Medication Guide has been approved by the U.S. Food and Drug Administration. 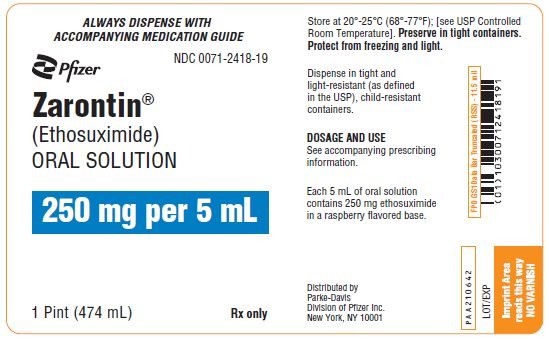 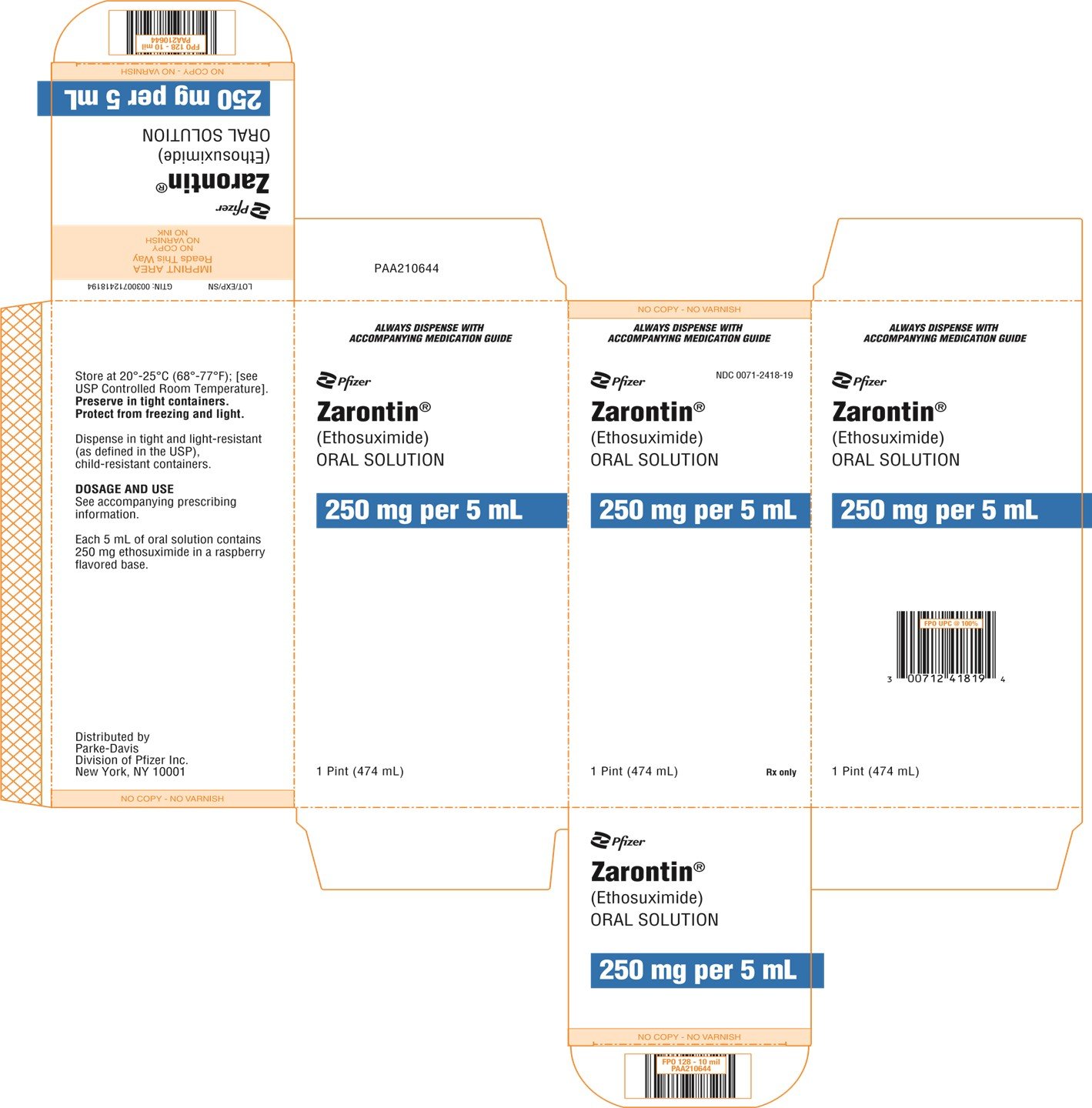 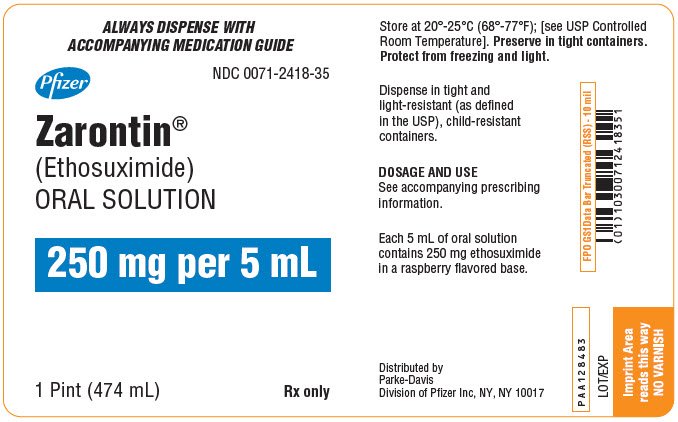 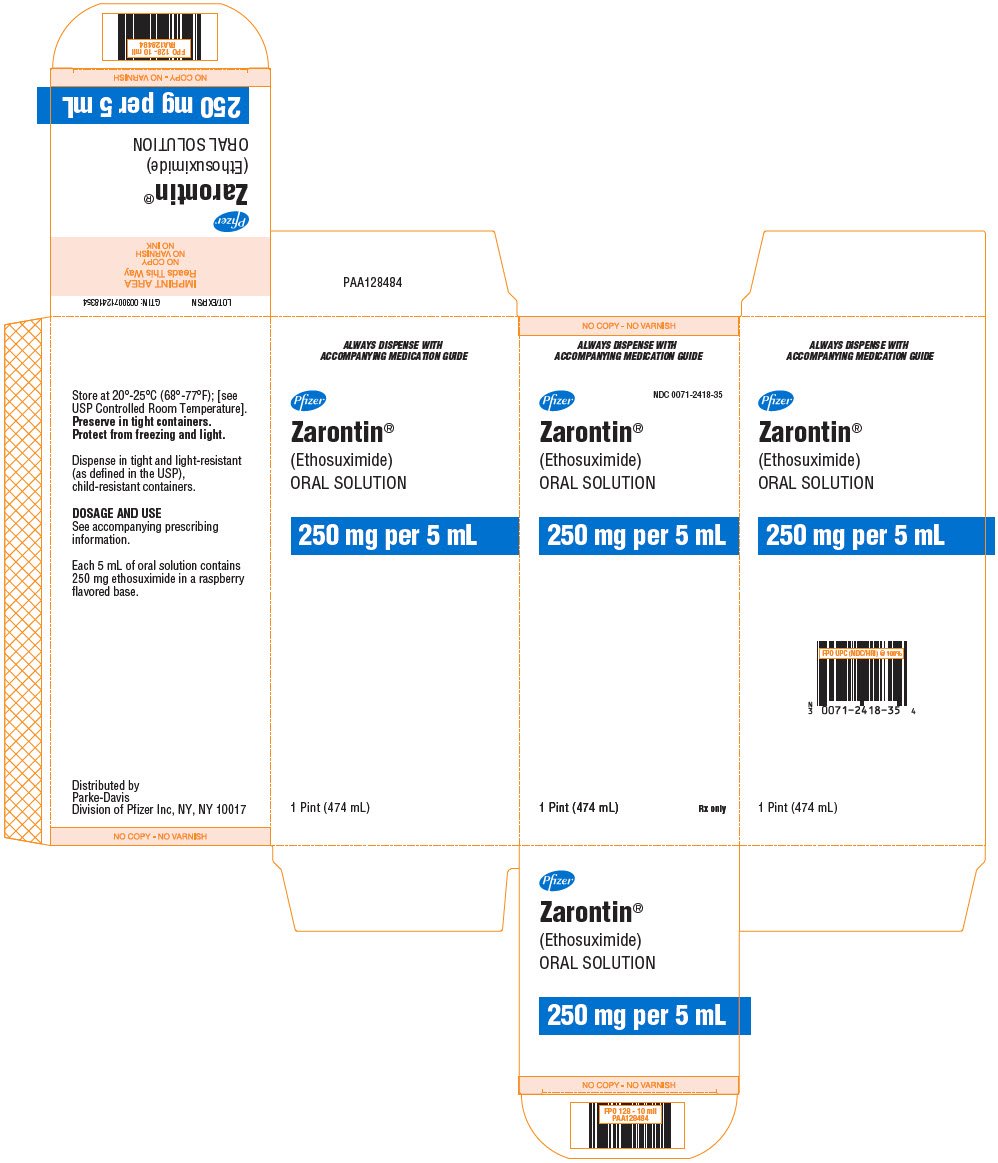