FOR ADDITIVE USE ONLY AFTER

DILUTION IN I.V. FLUIDS TO CORRECT

Sodium Lactate Injection, USP 50 mEq (5 mEq/mL), is a sterile, nonpyrogenic, concentrated solution of Sodium Lactate in water for injection. The solution is administered after dilution by the intravenous route as an electrolyte replenisher and systemic alkalizer. It should not be administered undiluted. Each 10 mL vial contains Sodium Lactate, anhydrous 5.6 g (50 mEq each of Na+ and lactate anion). The solution contains no bacteriostat, antimicrobial agent or added buffer. Contains hydrochloric acid for pH adjustment. The osmolar concentration is 10 mOsmol/mL (calc.). When diluted with water for injection to make a 1/6 molar solution, the pH of Sodium Lactate injection is 6.5 (6.0 to 7.3).

The semi-rigid vial is fabricated from a specially formulated polyolefin. It is a copolymer of ethylene and propylene. The safety of the plastic has been confirmed by tests in animals according to USP biological standards for plastic containers. The container requires no vapor barrier to maintain the proper drug concentration.

Lactate anion [CH3CH(OH)COO−] serves the important purpose of providing "raw material" for subsequent regeneration of bicarbonate (HCO3−) and thus acts as a source (alternate) of bicarbonate when normal production and utilization of lactic acid is not impaired as a result of disordered lactate metabolism. Lactate anion is usually present in extracellular fluid at a level of less than 1 mEq/liter, but may attain a level of 10 mEq/liter during exercise. It is seldom measured as such and thus is one of the "unmeasured anions" ("anion gap") in determinations of the ionic composition of plasma.

The lactate anion is in equilibrium with pyruvate and has an alkalizing effect resulting from simultaneous removal by the liver of lactate and hydrogen ions. In the liver, lactate is metabolized to glycogen which is ultimately converted to carbon dioxide and water by oxidative metabolism.

The sodium (Na+) ion combines with bicarbonate ion produced from carbon dioxide of the body and thus retains bicarbonate to combat metabolic acidosis (bicarbonate deficiency). The normal plasma level of lactate ranges from 0.9 to 1.9 mEq/liter.

Sodium is the principal cation of extracellular fluid. It comprises more than 90% of total cations at its normal plasma concentration of approximately 140 mEq/liter. The sodium ion exerts a primary role in controlling total body water and its distribution.

Indications and Usage for Sodium Lactate

Sodium Lactate Injection, USP 50 mEq (5 mEq/mL), is primarily indicated, after dilution, as a source of bicarbonate for prevention or control of mild to moderate metabolic acidosis in patients with restricted oral intake whose oxidative processes are not seriously impaired. It is not intended nor effective for correcting severe acidotic states which require immediate restoration of plasma bicarbonate levels. Sodium Lactate has no advantage over sodium bicarbonate and may be detrimental in the management of lactic acidosis.

It should not be used in conditions in which lactate levels are increased (e.g., shock, congestive heart failure, respiratory alkalosis) or in which utilization of lactate is diminished (e.g., anoxia, beriberi).

NOT FOR USE IN THE TREATMENT OF LACTIC ACIDOSIS.

The intravenous administration of this solution (after appropriate dilution) can cause fluid and/or solute overloading resulting in dilution of other serum electrolyte concentrations, overhydration, congested states or pulmonary edema.

Excessive administration of potassium-free solutions may result in significant hypokalemia.

Sodium Lactate Injection, USP 50 mEq must be suitably diluted before infusion to avoid a sudden increase in the level of sodium or lactate. Too rapid administration and overdosage should be avoided.

The potentially large loads of sodium given with lactate require that caution be exercised in patients with congestive heart failure or other edematous or sodium-retaining states, as well as in patients with oliguria or anuria.

Solutions containing lactate ions should be used with caution as excess administration may result in metabolic alkalosis.

Do not administer unless solution is clear and seal is intact. Discard unused portion.

Studies with Sodium Lactate Injection have not been performed to evaluate carcinogenic potential, mutagenic potential or effects on fertility.

The safety and effectiveness of Sodium Lactate have not been established in pediatric patients. Its limited use has been inadequate to fully define proper dosage and limitations for use.

An evaluation of current literature revealed no clinical experience identifying differences in response between elderly and younger patients. In general, dose selection for an elderly patient should be cautious, usually starting at the low end of the dosing range, reflecting the greater frequency of decreased hepatic, renal, or cardiac function, and of concomitant disease or other drug therapy.

Sodium ions are known to be substantially excreted by the kidney, and the risk of toxic reactions to this drug may be greater in patients with impaired renal function. Because elderly patients are more likely to have decreased renal function, care should be taken in dose selection, and it may be useful to monitor renal function.

Adverse effects of Sodium Lactate are essentially limited to overdosage of either sodium or lactate ions. See WARNINGS and PRECAUTIONS.

Sodium Lactate Injection, USP 50 mEq (5 mEq/mL) is administered intravenously only after addition to a larger volume of fluid. The amount of sodium ion and lactate ion to be added to larger volume intravenous fluids should be determined in accordance with the electrolyte requirements of each individual patient.

All or part of the content(s) of one (50 mEq in 10 mL) or more vial containers may be added to other intravenous solutions to provide any desired number of milliequivalents of lactate anion (with the same number of milliequivalents of Na+). The contents of one container (50 mEq in 10 mL) added to 290 mL of a nonelectrolyte solution or of sterile water for injection will provide 300 mL of an approximately isotonic (1/6 molar) concentration of Sodium Lactate (1.9%), containing 167 mEq/liter each of Na+ and lactate anion.

Parenteral drug products should be inspected visually for particulate matter and discoloration prior to administration. See CONTRAINDICATIONS.

How is Sodium Lactate Supplied

CAUTION: MUST BE DILUTED.
For Intravenous Use.

CAUTION: MUST BE DILUTED.
FOR INTRAVENOUS USE. 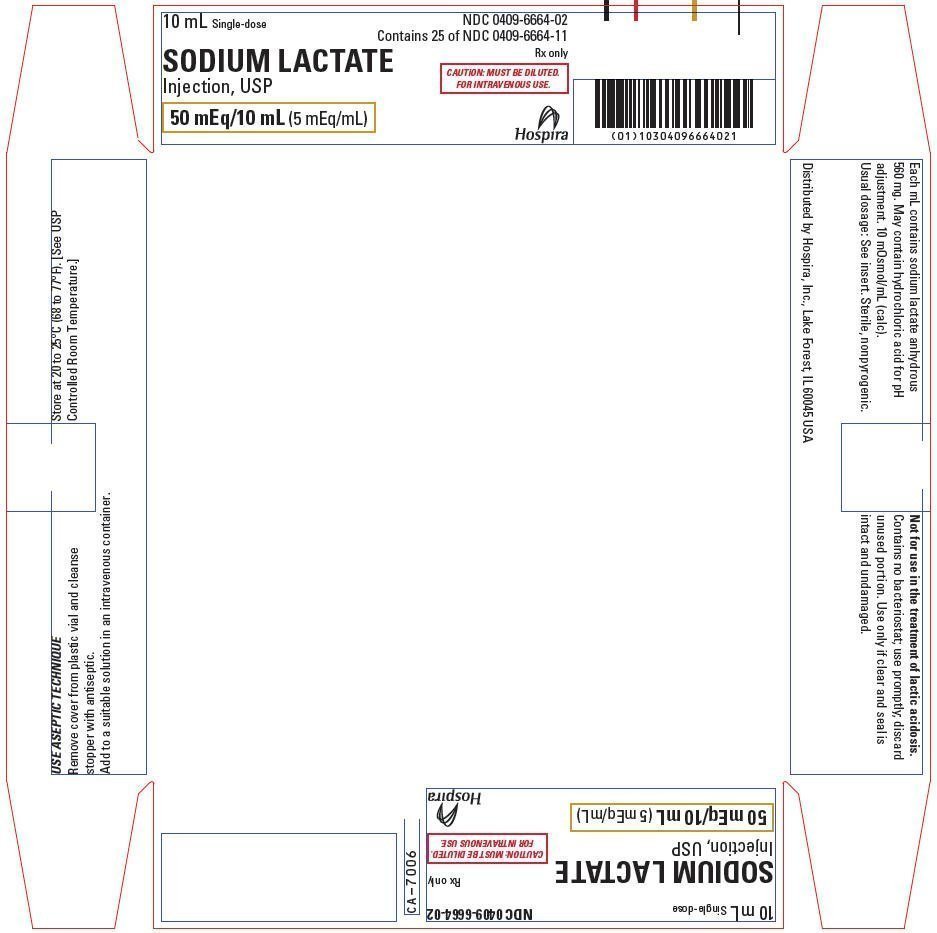