Indications and Usage for Quadracel

For intramuscular injection only.

Just before use, shake the vial well, until a uniform, white, cloudy suspension results. Parenteral drug products should be inspected visually for particulate matter and discoloration prior to administration, whenever solution and container permit. If either of these conditions exist, the product should not be administered.

Withdraw and administer a 0.5 mL dose of Quadracel vaccine intramuscularly into the deltoid muscle of the upper arm. Discard unused portion.

Quadracel should not be combined through reconstitution or mixed with any other vaccine.

Quadracel is a suspension for injection in 0.5 mL single-dose vials.

Severe allergic reaction (e.g., anaphylaxis) to any ingredient of Quadracel [see Description (11)] or following any diphtheria toxoid, tetanus toxoid, pertussis-containing vaccine, or inactivated poliovirus vaccine, is a contraindication to administration of Quadracel.

Progressive neurologic disorder, including infantile spasms, uncontrolled epilepsy, or progressive encephalopathy is a contraindication to administration of any pertussis-containing vaccine including Quadracel. Pertussis vaccine should not be administered to individuals with such conditions until a treatment regimen has been established and the condition has stabilized.

Epinephrine hydrochloride solution (1:1,000) and other appropriate agents and equipment must be available for immediate use in case an anaphylactic or acute hypersensitivity reaction occurs.

If any of the following events have occurred within the specified period after administration of a pertussis vaccine, the decision to administer Quadracel should be based on careful consideration of benefits and risks.

Vaccination with Quadracel may not protect all individuals.

If Quadracel is administered to immunocompromised persons, including persons receiving immunosuppressive therapy, the expected immune response may not be obtained. [See Drug Interactions (7.2).]

Syncope (fainting) may occur in association with administration of injectable vaccines including Quadracel. Procedures should be in place to avoid injury from fainting.

The incidence and severity of solicited injection site and systemic adverse reactions that occurred within 7 days after vaccination in each study group are shown in Table 1.

The following adverse events have been spontaneously reported, during the post-marketing use of Quadracel outside the US, in infants and children from 2 months through 6 years of age. Because these events are reported voluntarily from a population of uncertain size, it is not possible to estimate their frequency reliably or establish a causal relationship to vaccine exposure. This list includes adverse events based on one or more of the following factors: severity, frequency of reporting, or strength of evidence for a causal relationship to Quadracel.

Concomitant Administration with Other Vaccines

In the US clinical trial, Study M5I02, Quadracel was administered concomitantly with one or more of the following US-licensed vaccines: MMR vaccine and varicella vaccine. [See Adverse Reactions (6.1).]

When Quadracel is given at the same time as another injectable vaccine(s), the vaccines should be administered with different syringes and at different injection sites.

The safety and effectiveness of Quadracel has not been established in children less than 4 years of age or children 7 through 16 years of age and is not approved for use in these age groups.

Quadracel (Diphtheria and Tetanus Toxoids and Acellular Pertussis Adsorbed and Inactivated Poliovirus Vaccine) is a sterile suspension for intramuscular injection.

Corynebacterium diphtheriae is grown in modified Mueller's growth medium. (1) After purification by ammonium sulfate fractionation, the diphtheria toxin is detoxified with formaldehyde and diafiltered.

The acellular pertussis vaccine antigens are produced from Bordetella pertussis cultures grown in Stainer-Scholte medium (3) modified by the addition of casamino acids and dimethyl-beta-cyclodextrin. PT, FHA and PRN are isolated separately from the supernatant culture medium. FIM are extracted and copurified from the bacterial cells. The pertussis antigens are purified by sequential filtration, salt-precipitation, ultrafiltration and chromatography. PT is detoxified with glutaraldehyde. FHA is treated with formaldehyde and the residual aldehydes are removed by ultrafiltration. The individual antigens are adsorbed separately onto aluminum phosphate.

Poliovirus Type 1, Type 2 and Type 3 are each grown in separate cultures of MRC-5 cells, a line of normal human diploid cells, by the microcarrier method. (4) (5) The cells are grown in CMRL (Connaught Medical Research Laboratories) 1969 medium, supplemented with calf serum. For viral growth, the culture medium is replaced by Medium 199, without calf serum. After clarification and filtration, the viral suspensions are concentrated by ultrafiltration, and purified by liquid chromatography steps. The monovalent viral suspensions are inactivated with formaldehyde. Monovalent concentrates of each inactivated poliovirus are combined to produce a trivalent poliovirus concentrate.

The adsorbed diphtheria, tetanus and acellular pertussis antigens are combined with aluminum phosphate, 2-phenoxyethanol (not as a preservative) and water for injection, into an intermediate concentrate. The trivalent poliovirus concentrate is added and the vaccine is diluted to its final concentration.

Quadracel does not contain a preservative.

Both diphtheria and tetanus toxoids induce at least 2 neutralizing units per mL in the guinea pig potency test. The potency of the acellular pertussis antigens is evaluated by the antibody response of immunized mice to detoxified PT, FHA, PRN and FIM as measured by enzyme-linked immunosorbent assay (ELISA). The potency of the inactivated poliovirus antigens is determined by measuring antibody-mediated neutralization of poliovirus in sera from immunized rats.

Diphtheria is an acute toxin-mediated disease caused by toxigenic strains of C. diphtheriae. Protection against disease is due to the development of neutralizing antibodies to diphtheria toxin. A serum diphtheria antitoxin level of 0.01 IU/mL is the lowest level giving some degree of protection. Antitoxin levels of at least 0.1 IU/mL are generally regarded as protective. (6) Levels of 1.0 IU/mL have been associated with long-term protection. (7)

Tetanus is an acute disease caused by an extremely potent neurotoxin produced by C. tetani. Protection against disease is due to the development of neutralizing antibodies to tetanus toxin. A serum tetanus antitoxin level of at least 0.01 IU/mL, measured by neutralization assay, is considered the minimum protective level. (6) (8). A tetanus antitoxoid level ≥0.1 IU/mL as measured by the ELISA used in clinical studies of Quadracel is considered protective.

Pertussis (whooping cough) is a respiratory disease caused by B. pertussis. This Gram-negative coccobacillus produces a variety of biologically active components, though their role in either the pathogenesis of, or immunity to, pertussis has not been clearly defined.

Polioviruses, of which there are three serotypes (Types 1, 2, and 3), are enteroviruses. The presence of poliovirus type-specific neutralizing antibodies has been correlated with protection against poliomyelitis. (9)

Quadracel has not been evaluated for carcinogenic or mutagenic potential or impairment of fertility.

In Study M5I02, children 4 through 6 years of age received Quadracel or DAPTACEL + IPOL as the fifth dose in the diphtheria, tetanus, and pertussis vaccination series and the fourth or fifth dose in the inactivated poliovirus vaccination series. Subjects also received their second dose of MMR and Varicella vaccines, concomitantly. The immunogenicity subset comprised 263 subjects in the Quadracel group and 253 subjects in the DAPTACEL + IPOL vaccines group. [See study description in Adverse Reactions (6.1)].

Quadracel was non-inferior to DAPTACEL + IPOL vaccines administered concomitantly at separate sites, as demonstrated by comparison of the post-vaccination antibody booster response rates and GMCs/GMTs to diphtheria and tetanus (Table 2), to all pertussis antigens (Table 3) and to poliovirus 1, 2 and 3 (Table 4).

The vial stopper for this product is not made with natural latex rubber.

Quadracel should be stored at 2° to 8°C (35° to 46°F). Do not freeze. Product which has been exposed to freezing should not be used. Do not use after expiration date shown on the label.

Inform the parent or guardian of the following:

Provide the Vaccine Information Statements (VIS), which are required by the National Childhood Vaccine Injury Act of 1986.

Quadracel® is a registered trademark of Sanofi, its affiliates and subsidiaries.

Rx only
IM only

For children 4 years
through 6 years of age 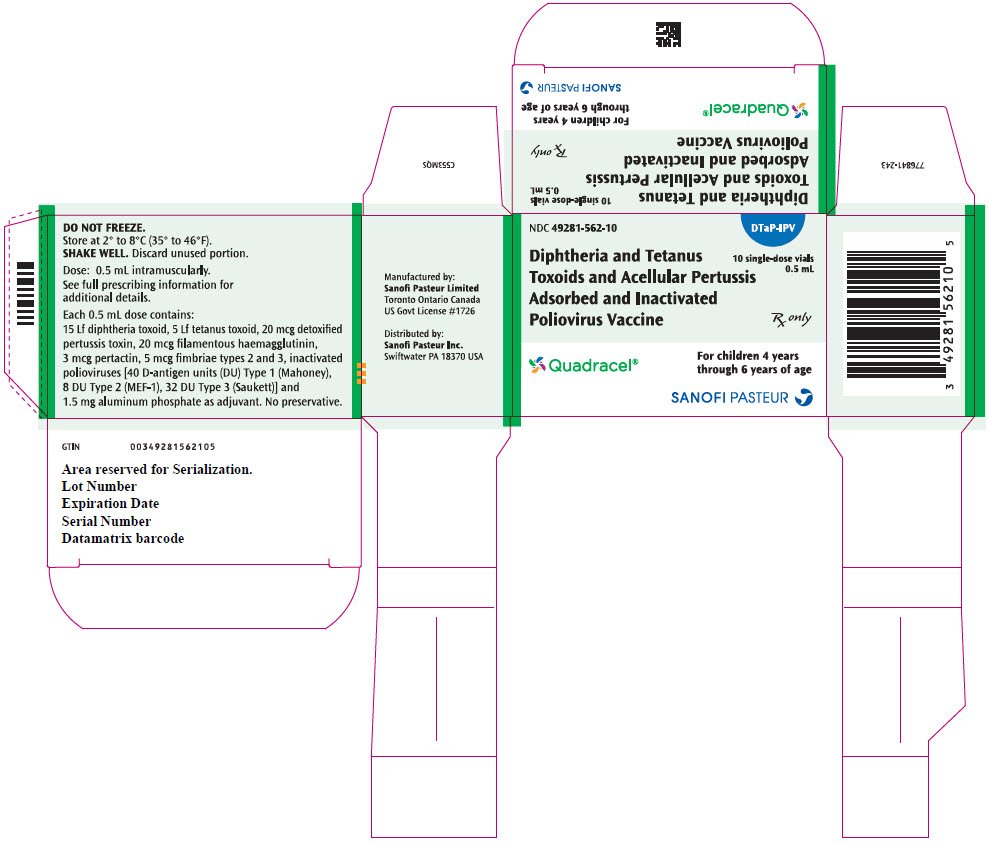