Indications and Usage for Pylarify

Pylarify is a radioactive drug. Only authorized persons qualified by training and experience should receive, use, and administer Pylarify. Handle Pylarify with appropriate safety measures to minimize radiation exposure during administration [see Warnings and Precautions (5.3)]. Use waterproof gloves and effective radiation shielding, including syringe shields, when preparing and handling Pylarify.

The recommended amount of radioactivity to be administered for PET imaging is 333 MBq (9 mCi) with an acceptable range of 296 MBq to 370 MBq (8 mCi to 10 mCi) administered as a single bolus intravenous injection.

Instruct patients to drink water to ensure adequate hydration prior to administration of Pylarify and to continue drinking and voiding frequently for the first few hours following administration to reduce radiation exposure [see Warnings and Precautions (5.3)].

Pylarify binds to prostate-specific membrane antigen (PSMA). Based on the intensity of the signals, PET images obtained using Pylarify indicate the presence of PSMA in tissues. Lesions should be considered suspicious if uptake is greater than physiologic uptake in that tissue or greater than adjacent background if no physiologic uptake is expected. Tumors that do not express PSMA will not be visualized. Increased uptake in tumors is not specific for prostate cancer [see Warnings and Precautions (5.1)].

Radiation absorbed dose estimates are shown in Table 1 for organs and tissues of adult male patients from intravenous administration of Pylarify. The radiation effective dose resulting from administration of 370 MBq (10 mCi) of Pylarify to an adult weighing 70 kg is estimated to be 4.3 mSv. The radiation doses for this administered dose to the critical organs, which are the kidneys, liver, and spleen, are 45.5 mGy, 13.7 mGy, and 10 mGy respectively. When PET/CT is performed, exposure to radiation will increase by an amount dependent on the settings used in the CT acquisition.

Injection: clear, colorless solution in a multiple-dose vial containing 37 MBq/mL to 2,960 MBq/mL (1 mCi/mL to 80 mCi/mL) of piflufolastat F 18 at calibration date and time.

Imaging interpretation errors can occur with Pylarify imaging. A negative image does not rule out the presence of prostate cancer and a positive image does not confirm the presence of prostate cancer. The performance of Pylarify for imaging of patients with biochemical evidence of recurrence of prostate cancer seems to be affected by serum PSA levels [see Clinical Studies (14)]. The performance of Pylarify for imaging of metastatic pelvic lymph nodes prior to initial definitive therapy seems to be affected by risk factors such as Gleason score and tumor stage [see Clinical Studies (14)]. Pylarify uptake is not specific for prostate cancer and may occur with other types of cancer as well as non-malignant processes and in normal tissues. Clinical correlation, which may include histopathological evaluation of the suspected prostate cancer site, is recommended.

Monitor patients for hypersensitivity reactions, particularly patients with a history of allergy to other drugs and foods. Reactions may not be immediate. Always have trained staff and resuscitation equipment available.

The adverse reactions reported in >0.5% of patients within the studies are shown in Table 2. In addition, a hypersensitivity reaction was reported in one patient (0.2%) with a history of allergic reaction.

Androgen deprivation therapy and other therapies targeting the androgen pathway

Androgen deprivation therapy (ADT) and other therapies targeting the androgen pathway, such as androgen receptor antagonists, may result in changes in uptake of Pylarify in prostate cancer. The effect of these therapies on performance of Pylarify PET has not been established.

Pylarify is not indicated for use in females. There is no information on the risk of adverse developmental outcomes in pregnant women or animals with the use of piflufolastat F 18. All radiopharmaceuticals, including Pylarify, have the potential to cause fetal harm depending on the fetal stage of development and the magnitude of the radiation dose.

Pylarify is not indicated for use in females. There is no information on the presence of piflufolastat F 18 in human milk, the effect on the breastfed infant, or the effect on milk production.

The safety and effectiveness of Pylarify in pediatric patients have not been established.

Of the 593 patients in completed clinical studies of Pylarify, 355 (60%) were ≥65 years old, while 76 (12.8%) were ≥75 years old. The efficacy and safety of Pylarify appear similar in adult and geriatric patients with prostate cancer, although the number of patients in the trials was not large enough to allow definitive comparison.

In the event of an overdose of Pylarify, reduce the radiation absorbed dose to the patient where possible by increasing the elimination of the drug from the body using hydration and frequent bladder voiding. A diuretic might also be considered. If possible, an estimate of the radiation effective dose administered to the patient should be made. 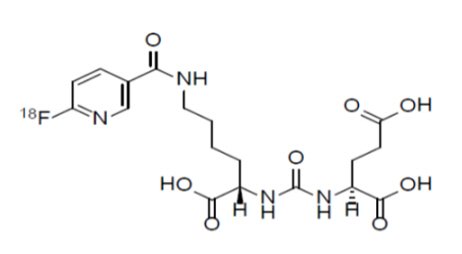 The chiral purity of the unlabeled piflufolastat F 18 precursor is greater than 99% (S,S).

Pylarify is a sterile, non-pyrogenic, clear, colorless solution for intravenous injection. Each milliliter contains 37 to 2,960 MBq (1 to 80 mCi) piflufolastat F 18 with ≤0.01 µg/mCi of piflufolastat at calibration time and date, and ≤ 78.9 mg ethanol in 0.9% sodium chloride injection USP. The pH of the solution is 4.5 to 7.0.

Pylarify has a radiochemical purity of at least 95% up to 10 hours following end of synthesis, and specific activity of at least 1000 mCi/µmol at the time of administration.

Pylarify is radiolabeled with fluorine 18 (F 18), a cyclotron produced radionuclide that decays by positron emission to stable oxygen 18 with a half-life of 109.8 minutes. The principal photons useful for diagnostic imaging are the coincident pair of 511 keV gamma photons, resulting from the interaction of the emitted positron with an electron (Table 3).

The point source air-kerma coefficient for F 18 is 3.75 × 10-17 Gy m2/(Bq s). The first half-value thickness of lead (Pb) for F 18 gamma rays is approximately 6 mm. The relative reduction of radiation emitted by F 18 that results from various thicknesses of lead shielding is shown in Table 4. The use of 8 cm Pb decreases the radiation transmission (i.e. exposure) by a factor of about 10,000.

The relationship between piflufolastat F 18 plasma concentrations and image interpretation has not been studied.

Following intravenous administration of piflufolastat F 18, blood levels decline in a biphasic fashion. The distribution half-life is 0.17 ± 0.044 hours and the elimination half-life is 3.47 ± 0.49 hours.

Elimination is by urinary excretion. In the first 8 hours post-injection, approximately 50% of administered radioactivity is excreted in the urine.

No animal studies with piflufolastat have been performed to evaluate the potential impairment of fertility in males or females.

The safety and efficacy of Pylarify were evaluated in two prospective, open-label, multi-center clinical studies in men with prostate cancer: OSPREY (NCT02981368) and CONDOR (NCT03739684).

OSPREY enrolled a cohort of 268 men with biopsy-proven prostate cancer who were considered candidates for radical prostatectomy and pelvic lymph node dissection. These patients were all considered to have high risk disease based on criteria such as Gleason score, PSA level, and tumor stage. Each patient received a single Pylarify PET/CT from mid-thigh to skull vertex.

Three central readers independently interpreted each PET scan for the presence of abnormal Pylarify uptake in pelvic lymph nodes in multiple subregions, including the common iliac lymph nodes. The readers were blinded to all clinical information. While readers also recorded the presence of Pylarify PET-positive lesions in the prostate gland and outside the pelvis, those results were not included in the primary efficacy analysis.

0.2 ng/mL) or by an increase in serum PSA of at least 2 ng/mL above the nadir after other therapies. The mean age was 68 years (range 43 to 91 years), and 90% of patients were white. The median serum PSA was 0.82 ng/mL. Prior treatment included radical prostatectomy in 85% of the patients.

All enrolled patients had conventional imaging evaluation (for most patients, CT or MRI) within 60 days prior to receiving Pylarify PET, and this evaluation was negative or equivocal for prostate cancer. All patients received a single Pylarify PET/CT from mid-thigh to skull vertex with optional imaging of the lower extremities.

Three central readers independently evaluated each Pylarify PET scan for the presence and location of positive lesions. Location of each lesion was categorized in one of 19 subregions that were grouped into 5 regions (prostate/prostate bed, pelvic lymph nodes, other lymph nodes, soft tissue, bone). The readers were blinded to all clinical information.

Depending on the reader, a total of 123 to 137 patients (59% to 66%) had at least one lesion that was identified as Pylarify PET-positive (Table 6, TP + FP + PET-Positive Without Reference Standard). The region most commonly observed to have a Pylarify PET-positive finding was pelvic lymph nodes (40% to 42% of all PET-positive regions) and the least common region was soft tissue (6% to 7%).

Depending on the reader, 99 to 104 patients with a Pylarify PET-positive region had location-matched composite reference standard information available (Evaluable Set, Table 6, TP + FP) that consisted of histopathology, imaging (CT, MRI, ultrasound, fluciclovine PET, choline PET, or bone scan) obtained within 60 days of the Pylarify PET scan, or response of serum PSA level to targeted radiotherapy. Reference standard information for PET-negative regions was not systematically collected in this study.

An exploratory analysis of region-level positive predictive value using only PET-positive regions that had sufficient composite reference standard information to determine true positive or false positive status demonstrated results of 67% to 70% with the lower bound of the 95% confidence interval ranging from 59% to 63%.

The percentage of patients categorized as true positive in a location-matched analysis out of all patients scanned with Pylarify was an additional exploratory endpoint. Using the same imputation approach for PET-positive patients who lacked reference standard information as in Table 6 above, this value was 47% to 51%, with the lower bound of the 95% confidence interval ranging from 40% to 45%.

Table 7 shows patient-level Pylarify PET results from the majority read stratified by serum PSA level. Percent PET positivity was calculated as the proportion of patients with a positive Pylarify PET out of all patients scanned. Percent PET positivity includes patients determined to be either true positive or false positive as well as those in whom such determination was not made due to lack of composite reference standard information. The likelihood of a patient having at least one Pylarify PET-positive lesion generally increased with higher serum PSA level.

Store Pylarify at controlled room temperature (USP) 20°C to 25°C (68°F to 77°F). Pylarify does not contain a preservative. Store Pylarify in the original container with radiation shielding. The expiration date and time are provided on the container label. Use Pylarify within 10 hours from the time of end of synthesis.

This preparation is approved for use by persons under license by the Nuclear Regulatory Commission or the relevant regulatory authority of an Agreement State.

Instruct patients to drink a sufficient amount of water to ensure adequate hydration before their PET study and urge them to drink and urinate as often as possible during the first hours following the administration of Pylarify, in order to reduce radiation exposure [see Dosage and Administration (2.3) and Warnings and Precautions (5.3)].

Pylarify® is a trademark of Progenics Pharmaceuticals, Inc.

Do not use if discolored or if it contains particulate matter.
Calculate correct dosage from date and time of calibration.
Recommended Dosage: See Prescribing Information