Netspot, after radiolabeling with Ga 68, is indicated for use with positron emission tomography (PET) for localization of somatostatin receptor positive neuroendocrine tumors (NETs) in adult and pediatric patients.

Radiopharmaceuticals should be used by or under the control of physicians who are qualified by specific training and experience in the safe use and handling of radionuclides, and whose experience and training have been approved by the appropriate governmental agency authorized to license the use of radionuclides.

Patient Preparation
Instruct patients to drink a sufficient amount of water to ensure adequate hydration prior to administration of Ga 68 dotatate. Drink and void frequently during the first hours following administration to reduce radiation exposure.

In adults and pediatric patients, the recommended amount of radioactivity to be administered for PET imaging is 2 MBq/kg (0.054 mCi/kg) of body weight up to 200 MBq (5.4 mCi).

Netspot may be radiolabeled with Ga 68 chloride eluate from the following generators:

The Netspot kit is supplied as 2 vials [see Dosage Forms and Strengths (3)] which allows for direct preparation of Ga 68 dotatate injection with the eluate from one of the following generators (see below for specific instructions for use with each generator):

The Ge 68/Ga 68 generators are not supplied with the Netspot kit.

Components of the kit:

Ancillary supplies (not included in the kit):

Prepare Ga 68 dotatate for intravenous injection according to the following aseptic procedure:

a. Use suitable shielding to reduce radiation exposure.

e. Prepare syringes for elution and reconstitution steps per Table 1 below.

g. Use 1 mL low dead space plastic syringe to precisely measure the adequate volume of reaction buffer to be added during preparation. Do Not use glass syringe.

h. Prior to piercing vial septums, flip-off cap and swab the top of the vial closure with alcohol to disinfect the surface, and allow the stopper to dry.

i. Pierce the Vial 1 septum with a sterile needle connected to a 0.2 micron sterile vented filter (not supplied) to maintain atmospheric pressure within the vial during the reconstitution process.

j. Follow the generator specific reconstitution procedures below. Then continue with the incubation step k.

l. After 7 minutes, remove the vial from the dry bath, place it in an appropriate lead shield and let it cool down to room temperature for approximately 10 minutes.

n. Perform the quality controls according to the recommended methods in order to check the compliance with the specifications [see Dosage and Administration (2.5)].

o. Prior to use, visually inspect the solution behind a shielded screen for radioprotection purposes. Only use solutions that are clear without visible particles.

p. Keep the vial containing the Ga 68 dotatate injection upright in a radio-protective shield container at a temperature below 25°C (77°F) until use.

q. After addition of Ga 68 chloride to the reaction vial, use Ga 68 dotatate injection within 4 hours. 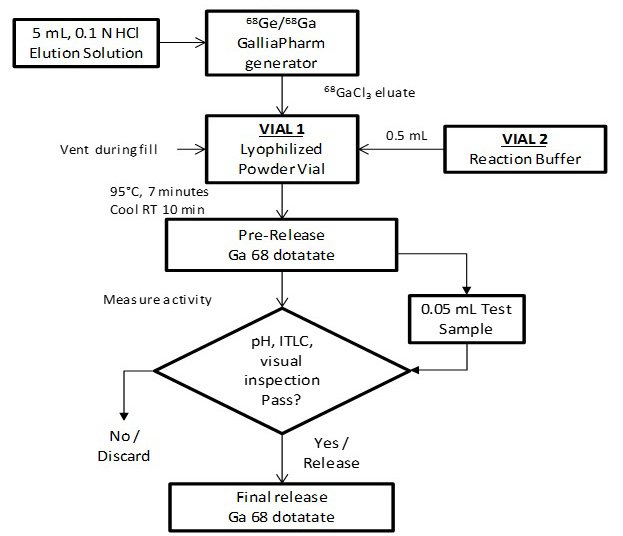 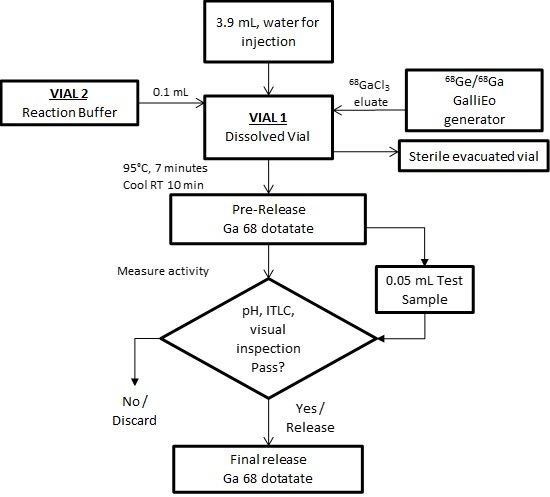 Prior to use, visually inspect the prepared Ga 68 dotatate injection behind a lead glass shield for radioprotection purposes. Only use solutions that are clear without visible particles. Using a single-dose syringe fitted with a sterile needle and protective shielding, aseptically withdraw the prepared Ga 68 dotatate injection prior to administration. Measure the total radioactivity in the syringe by a dose calibrator immediately prior to administration. The dose calibrator must be calibrated with National Institute of Standards and Technology (NIST) traceable standards.

Handle and dispose radioactive material in accordance with applicable regulations.

Perform the quality controls in Table 2 behind a lead glass shield for radioprotection purposes.

Determine labeling efficiency of Ga 68 dotatate applying one of the following recommended methods:

a) Pour ammonium acetate 1M: Methanol (1:1 V/V) solution to a depth of 3 mm to 4 mm in the developing tank, cover the tank, and allow it to equilibrate.

b) Apply a drop of the Ga 68 dotatate injection on a pencil line 1 cm from the bottom of an ITLC SG strip.

c) Place the ITLC SG strip in the developing tank and allow it to develop for a distance of 6 cm from the point of application (i.e., to 7 cm from the bottom of the ITLC strip).

d) Scan the ITLC SG with a radiometric ITLC scanner.

e) Calculate radiochemical purity (RCP) by integration of the peaks on the chromatogram. Do not use the reconstituted product if the RCP is less than 95%.

For Ga 68 dotatate PET imaging, the acquisition must include a whole body acquisition from skull to mid-thigh. Images can be acquired 40 minutes to 90 minutes after the intravenous administration of the Ga 68 dotatate. Adapt imaging acquisition delay and duration according to the equipment used, and the patient and tumor characteristics, in order to obtain the best image quality possible.

The effective radiation dose resulting from the administration of 150 MBq (4.05 mCi) [within the range of the recommended Ga 68 dotatate injection dose] to an adult weighing 75 kg, is about 3.15 mSv. For an administered activity of 150 MBq (4.05 mCi) the typical radiation dose to the critical organs, which are the urinary bladder wall, the spleen and the kidneys/adrenals, are about 18 mGy, 16 mGy and 12 mGy, respectively. Because the spleen has one of the highest physiological uptakes, higher uptake and radiation dose to other organs or pathologic tissues may occur in patients with spleen disorders (e.g., splenectomy and splenosis) [see Risk for Image Misinterpretation (5.3)].

Table 4 indicates how effective dose per injection activity scales with body habitus in computational models of adult and pediatric patients.

For Injection: Netspot is supplied as a single-dose kit, containing two vials for preparation of Ga 68 dotatate injection:

Gallium 68 is obtained from one of the following generators:

After reconstitution with Ga 68 and pH adjustment with Reaction Buffer, Vial 1 contains a sterile solution of Ga 68 dotatate at a strength of up to 218 MBq/mL (5.89 mCi/mL).

Avoid close contact with infants and pregnant women during the first 12 hours after administration of Ga 68 dotatate.

The uptake of Ga 68 dotatate reflects the level of somatostatin receptor density in NETs. However, uptake can also be seen in a variety of other tumor types (e.g., those derived from neural crest tissue). Increased uptake might also be seen in sites of splenosis or other pathologic conditions (e.g., thyroid disease or subacute inflammation) or might occur as a normal physiologic variant (e.g., uncinate process of the pancreas). PET images with Ga 68 dotatate should be interpreted visually and the uptake may need to be confirmed by histopathology or other assessments [see Dosage and Administration (2.7)].

A negative scan after the administration of Ga 68 dotatate in patients who do not have a history of NETs, including in patients suspected of ectopic ACTH-secreting tumors, does not rule out the presence of NETs.

The safety of Ga 68 dotatate was evaluated in three single center studies [see Clinical Studies (14)] and in a survey of the scientific literature. No serious adverse reactions were identified.

The following adverse reactions have been identified during post-approval use of Netspot or other somatostatin receptor imaging agents. Because these reactions are reported voluntarily from a population of uncertain size, it is not always possible to reliably estimate their frequency or establish a causal relationship to the drug.

In the U.S. general population, the estimated background risks of major birth defects and miscarriage in clinically recognized pregnancies are 2-4% and 15-20%, respectively.

Advise a lactating woman to interrupt breastfeeding and pump and discard breast milk for 12 hours after Ga 68 dotatate administration in order to minimize radiation exposure to a breastfed infant.

Clinical studies of Ga 68 dotatate injection did not include sufficient numbers of subjects aged 65 and over, to determine whether they respond differently from younger subjects. Other reported clinical experience has not identified differences in responses between the elderly and younger patients.

In the event of a radiation overdose, the absorbed dose to the patient should be reduced where possible by increasing the elimination of the radionuclide from the body by reinforced hydration and frequent bladder voiding. A diuretic might also be considered. If possible, an estimate of the radioactive dose given to the patient should be performed.

Netspot is supplied as a sterile, single-dose kit for preparation of Ga 68 dotatate injection for intravenous use.

Dotatate, also known as DOTA-0-Tyr3-Octreotate, is a cyclic 8 amino acid peptide with a covalently bound chelator (dota). The peptide has the amino acid sequence: H-D-Phe-Cys-Tyr-D-Trp-Lys-Thr-Cys-Thr-OH, and contains one disulfide bond. Dotatate has a molecular weight of 1435.6 Daltons and its chemical structure is shown in Figure 3. 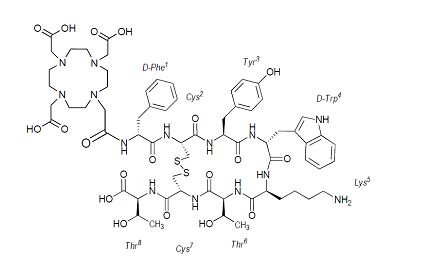 Netspot is a Kit with the following components:

After reconstitution and radiolabeling, [see Dosage and Administration (2.3)], Ga 68 dotatate injection also contains hydrochloric acid as an excipient derived from the generator eluate. The prepared Ga 68 dotatate injection for intravenous use, is a sterile, pyrogen free, clear, colorless, buffered solution, with a pH between 3.2 - 3.8. Table 5, Table 6, and Table 7 display the principle radiation emission data, radiation attenuation by lead shielding, and physical decay of Ga 68.

The relationship between Ga 68 dotatate plasma concentrations and successful imaging was not explored in clinical trials.

Ga 68 dotatate distributes to all sstr2-expressing organs, such as pituitary, thyroid, spleen, adrenals, kidney, pancreas, prostate, liver, and salivary glands. There is no uptake in the cerebral cortex or in the heart, and usually thymus and lung uptakes are low.

A total of 12% of the injected dose is excreted in urine in the first four hours post-injection.

No animal studies on fertility, embryology, mutagenic potential, or carcinogenic potential have been conducted with Ga 68 dotatate. However, genotoxicity studies conducted with a very similar molecule (mixture Lu 175 dotatate/dotatate) shows that these non-radioactive compounds do not induce mutation at the TK locus of L5178Y mouse lymphoma cells in vitro, nor reverse mutation in Salmonella typhimurium, or Escherichia coli (both in the absence or presence of S9 metabolic activation).

Study B was a published study which involved 104 patients (mean age 58; 52 men and 52 women) with suspected NETs due to clinical symptoms, elevated levels of tumor markers, or indeterminate tumors suggestive of NET. Diagnostic performance of Ga 68 dotatate PET in localizing tumor sites was retrospectively assessed using a reference standard: histopathology (n = 49) or clinical follow up of up to 5-month duration (n = 55). Images were interpreted by consensus between two on-site readers who were not blinded to clinical information. NET sites were localized by reference standard in 36 patients (all by histopathology). Out of these, Ga 68 dotatate was positive, correctly identifying an NET site, in 29 patients and was falsely negative in seven. In 68 patients with no NET identified by a reference standard, the images were negative in 61 and falsely positive in seven patients.

The radionuclide is not part of the kit. Before reconstitution and radiolabeling with Ga 68, the contents of this kit are not radioactive.

For prolonged storage, store Netspot in its original packaging at room temperature below 25°C (77°F) (do not freeze). After reconstitution and radiolabeling [see Dosage and Administration (2.3)] with activities of up to 1,110 MBq (30 mCi), keep Ga 68 dotatate injection upright with an appropriate shielding to protect from radiation, at a temperature below 25°C (77°F) (do not freeze), and for a maximum of 4 hours. Netspot should not be used more than 4 hours after reconstitution and radiolabeling; discard if not used within 4 hours. The storage of the radiolabeled product must comply with regulatory requirements for radioactive materials.

Advise patients to drink a sufficient amount of water to ensure adequate hydration before their PET study and urge them to drink and urinate as often as possible during the first hours following the administration of Ga 68 dotatate injection, in order to reduce radiation exposure [see Dosage and Administration (2.3)].

Advise a lactating woman to interrupt breastfeeding and pump and discard breast milk for 12 hours after Ga 68 dotatate injection administration in order to minimize radiation exposure to a breastfed infant [see Use in Specific Populations (8.2)].

Advise patients to avoid close contact with infants and pregnant women during the first 12 hours after administration of Ga 68 dotatate.

(kit for the preparation of
Ga 68 dotatate injection) 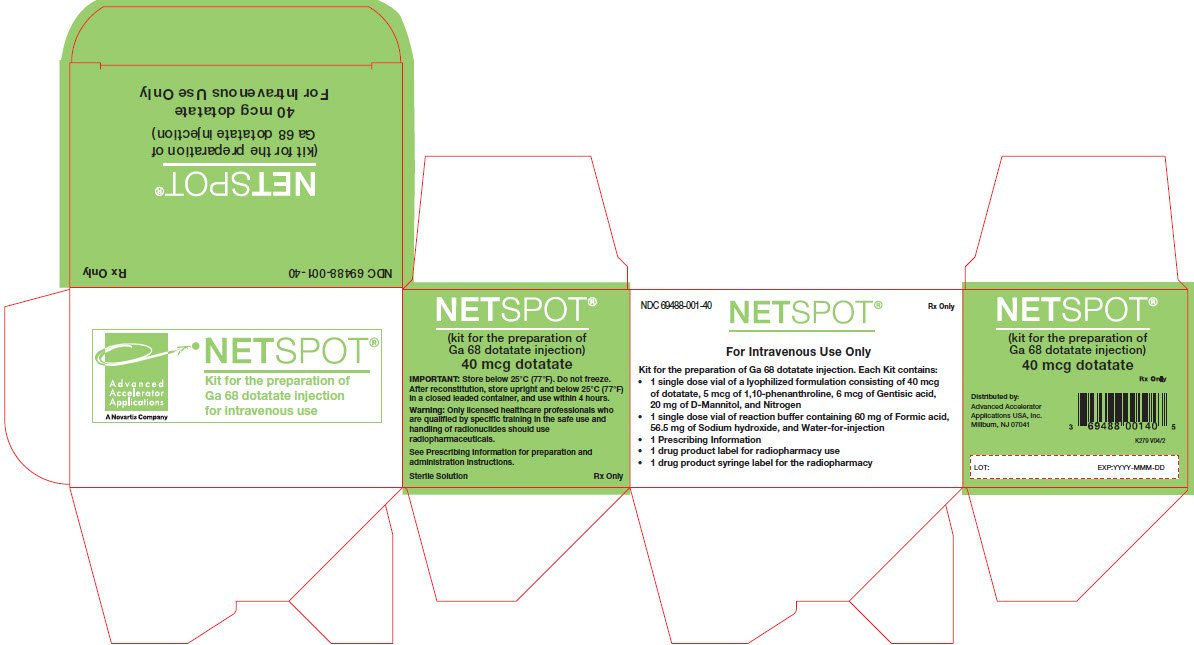 For pH adjustment of radiolabeled Netspot only

(kit for the preparation of
Ga 68 dotatate injection) syringe

See Prescribing Information before use. 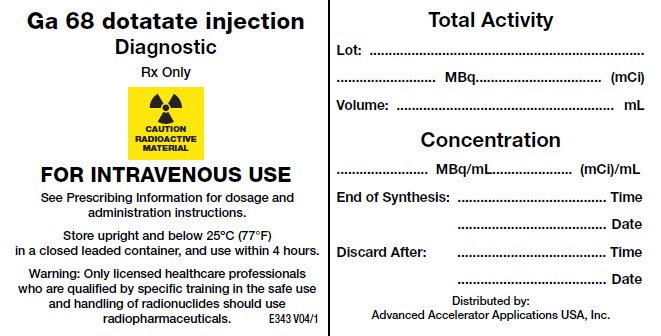