Indications and Usage for Defitelio

The recommended dosage of Defitelio for adult and pediatric patients is 6.25 mg/kg every 6 hours given as a 2‑hour intravenous infusion. The dose should be based on patient’s baseline body weight, defined as the patient’s weight prior to the preparative regimen for HSCT.

Administer Defitelio for a minimum of 21 days. If after 21 days signs and symptoms of hepatic VOD have not resolved, continue Defitelio until resolution of VOD or up to a maximum of 60 days.

Treatment modification, including temporary or permanent discontinuation of Defitelio, should follow the recommendations in Table 1.

Dilute Defitelio in 5% Dextrose Injection, USP or 0.9% Sodium Chloride Injection, USP to a concentration of 4 mg/mL to 20 mg/mL. Administer the diluted solution over 2 hours.

Vials contain no antimicrobial preservatives and are intended for a single-patient-use only. Partially used vials should be discarded. Use the diluted Defitelio solution within 4 hours if stored at room temperature or within 24 hours if stored under refrigeration. Up to four doses of Defitelio solution may be prepared at one time, if refrigerated.

•
Determine the dose (mg) and number of vials of Defitelio based on the individual patient’s baseline weight (weight prior to the preparative regimen for HSCT).
•
Calculate the volume of Defitelio needed, withdraw this amount from the vial(s) and add it to the infusion bag containing 0.9% Sodium Chloride Injection or 5% Dextrose Injection for each dose to make a final concentration of 4 mg/mL to 20 mg/mL.
•
Gently mix the solution for infusion.
•
Parenteral drug products should be inspected visually for particulate matter and discoloration prior to administration, whenever solution and container permit. Only clear solutions without visible particles should be used. Depending on the type and amount of diluent, the color of the diluted solution may vary from colorless to light yellow.

Injection: 200 mg/2.5 mL (80 mg/mL) of defibrotide sodium as a clear, light yellow to brown solution in a single-patient-use glass vial.

The use of Defitelio is contraindicated in the following conditions:

Defitelio increased the activity of fibrinolytic enzymes in vitro, and it may increase the risk of bleeding in patients with VOD after hematopoietic stem-cell transplantation (HSCT). Do not initiate Defitelio in patients with active bleeding. Monitor patients for signs of bleeding. If patients on Defitelio develop bleeding, discontinue Defitelio, treat the underlying cause, and provide supportive care until the bleeding has stopped [see Dosage and Administration (2.3)].

The following adverse reactions are discussed in greater detail in other sections of the labeling:

The safety of Defitelio was determined in 176 adult and pediatric patients with hepatic VOD with pulmonary and/or renal dysfunction following HSCT who were treated with Defitelio 6.25 mg/kg every 6 hours [see Clinical Studies (14)]. Patients were excluded from these trials if at time of study entry they had significant acute bleeding, active grades B-D graft-versus-host disease, or a requirement for multiple vasopressors to provide blood pressure support. For the purposes of adverse event recording in the clinical trials, events were not required to be reported if they were related to the hepatic VOD, or if they were expected to occur after hematopoietic stem-cell transplantation (HSCT), unless they were serious or Grade 4-5.

The median age of the safety population was 25 years (range: 1 month to 72 years), and 63% were ≥17 years of age. A total of 60% of patients were male, 78% were white, 89% had undergone allogeneic HSCT, and the underlying diagnosis was acute leukemia for 43%. At study entry, 13% were dialysis dependent and 18% were ventilator dependent. Defitelio was administered for a median of 21 days (range: 1 to 83 days).

a Excludes events considered to be due to the underlying disease: multi-organ failure, veno-occlusive disease, respiratory failure, renal failure, and hypoxia

There are no available data on Defitelio use in pregnant women. When administered to pregnant rabbits during the period of organogenesis at doses that were comparable to the recommended human dose based on body surface area, defibrotide sodium decreased the number of implantations and viable fetuses. Advise pregnant women of the potential risk of miscarriage.

Embryo-Fetal toxicity assessment was attempted in rats and rabbits, but was not possible because of high maternal mortality, abortion, and fetal resorption at all doses. Pregnant rats were administered defibrotide sodium from gestational day (GD) 6 to 15 at 0, 240, 1200, and 4800 mg/kg/day by continuous intravenous infusion over 24 hours or at 60, 120, and 240 mg/kg/day by 2-hour infusions 4 times per day. Pregnant rabbits were administered defibrotide sodium at 0, 30, 60, or 120 mg/kg/day from GD 6 to 18 by 2-hour infusions 4 times per day.

A juvenile toxicity study in 21-day-old rats was conducted with intravenous bolus administration of defibrotide sodium at 40, 150, or 320 mg/kg/day for 4 weeks. A delayed mean age of preputial separation was observed at all doses, suggesting a delay in onset of male puberty. The dose of 40 mg/kg/day is approximately 0.4 times the clinical dose on a mg/m2 basis for a child. The relevance of this finding for the onset of male puberty in humans is unknown.

Clinical studies of Defitelio did not include sufficient numbers of subjects aged 65 and over to determine whether they respond differently from younger subjects. Other reported clinical experience has not identified differences in responses between the elderly and younger patients.

There are no known cases of overdose with Defitelio. There is no known antidote for Defitelio, and Defitelio is not dialyzable. If an overdose occurs, institute general supportive measures. 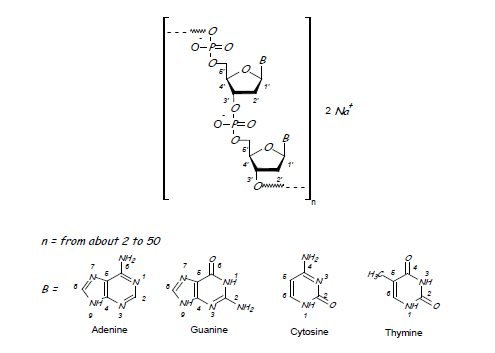 Defitelio (defibrotide sodium) injection is a clear, light yellow to brown, sterile, preservative-free solution in a single-patient-use vial for intravenous use. Each milliliter of the injection contains 80 mg of defibrotide sodium and 10 mg of Sodium Citrate, USP, in Water for Injection, USP. Hydrochloric Acid, NF, and/or Sodium Hydroxide, NF, may have been used to adjust pH to 6.8-7.8.

At a dose 2.4 times the maximum recommended dose, Defitelio does not prolong the QTc interval to any clinically relevant extent.

Plasma concentrations of PAI-1 were assessed on an exploratory basis as a potential pharmacodynamic marker for efficacy in Study 2. PAI-1 is an inhibitor of t-PA and therefore of fibrinolysis. Mean PAI-1 levels on Days 7 and 14 were lower than those at baseline in patients with complete response (CR) and in those who were alive at Day+100, but this trend did not reach statistical significance. There were no statistically significant differences in mean PAI-1 levels by treatment or outcome.

After intravenous administration, peak plasma concentrations of defibrotide sodium occur approximately at the end of each infusion.

Defibrotide sodium is highly bound to human plasma proteins (average 93%) and has a volume of distribution of 8.1 to 9.1 L.

Metabolism followed by urinary excretion is likely the main route of elimination. The estimated total clearance was 3.4 to 6.1 L/h. The elimination half-life of defibrotide sodium is less than 2 hours. Similar plasma concentration profiles were observed in VOD patients after initial and multiple-dose administration of 6.25 mg/kg every 6 hours for 5 days. Therefore, no accumulation is expected following multiple-dose administration.

After administration of 6.25 mg/kg to 15 mg/kg doses of Defitelio as 2-hour infusions, approximately 5-15% of the total dose was excreted in urine as defibrotide sodium, with the majority excreted during the first 4 hours.

There is some evidence (animal studies, ex vivo human plasma, and healthy volunteers) that defibrotide sodium may enhance the pharmacodynamic activity of heparin and alteplase [see Drug Interactions (7)].

No carcinogenicity studies have been conducted with intravenous administration of defibrotide sodium.

In the 13-week toxicity studies in rats and dogs, intravenous administration of defibrotide sodium transiently prolonged activated partial thromboplastin time (APTT) at 1200 and 4800 mg/kg/day administered as a continuous infusion in rats and at 300 and 1600 mg/kg/day administered in 2-hour infusions 4 times daily in dogs. Prothrombin time (PT) was also transiently increased at 4800 mg/kg/day in rats. These findings were observed at doses at least 6 times higher on a mg/m2 basis than the clinical dose of 25 mg/kg/day. The effects on APTT and PT may be due to direct effects on coagulation based on the dose-dependent response observed.

The efficacy of Defitelio was investigated in three studies: two prospective clinical trials (Study 1 and Study 2), and an expanded access study (Study 3).

Study 1 enrolled 102 adult and pediatric patients in the Defitelio treatment group with a diagnosis of VOD according to the following criteria (bilirubin of at least 2 mg/dL and at least two of the following findings: hepatomegaly, ascites, and weight gain greater than 5% by Day+21 post-HSCT) with an associated diagnosis of multi-organ dysfunction (pulmonary, renal, or both) by Day+28 post-HSCT. Defitelio was administered to the treatment group at a dose of 6.25 mg/kg infused every 6 hours for a minimum of 21 days and continued until patient was discharged from the hospital. Patients enrolled in the Defitelio treatment group were not permitted to receive concomitant medications such as heparin, warfarin, or alteplase because of an increased risk of bleeding.

Study 2 included adult and pediatric patients with a diagnosis of hepatic VOD and multi-organ dysfunction following HSCT, with 75 patients treated with Defitelio at a dose of 6.25 mg/kg infused every 6 hours. The planned minimum duration of treatment was 14 days. The treatment could be continued until signs of hepatic VOD resolved.

Study 3 is an expanded access program for Defitelio for the treatment of adult and pediatric patients with hepatic VOD. The efficacy of defibrotide was evaluated in 351 patients who had received a HSCT and developed hepatic VOD with renal or pulmonary dysfunction. All patients received Defitelio at a dose of 6.25 mg/kg infused every 6 hours.

Baseline demographic information and details for patients treated in these studies are provided below in Table 3.

Table 3: Baseline Demographics of Patients Treated with Defitelio at 6.25 mg/kg Every 6 Hours

a Duration of treatment from first dose to last dose is presented because days without treatment were not captured for the expanded access study.

Based on published reports and analyses of patient level data for individuals with hepatic VOD with renal or pulmonary dysfunction who received supportive care or interventions other than Defitelio, the expected Day +100 survival rates are 21% to 31%.

Defitelio (defibrotide sodium) injection is supplied in a single-patient-use, clear glass vial as a clear, light yellow to brown, sterile, preservative-free solution for intravenous infusion. Each vial (NDC 68727-800-01) contains 200 mg/2.5 mL (at a concentration of 80 mg/mL) of defibrotide sodium.

•
Hemorrhage: Advise patients and caregivers that Defitelio may increase the risk of bleeding (hemorrhage). Instruct patients to immediately report any signs or symptoms suggestive of hemorrhage (unusual bleeding, easy bruising, blood in urine or stool, headache, confusion, slurred speech, or altered vision) [see Warnings and Precautions (5.1)].
•
Hypersensitivity Reactions: Ask patients if they have been treated with defibrotide sodium previously. Instruct patients on the risk of allergic reactions, including anaphylaxis. Describe the symptoms of allergic reactions, including anaphylaxis, and instruct the patient to seek medical attention immediately if they experience such symptoms [see Warnings and Precautions (5.2)]. 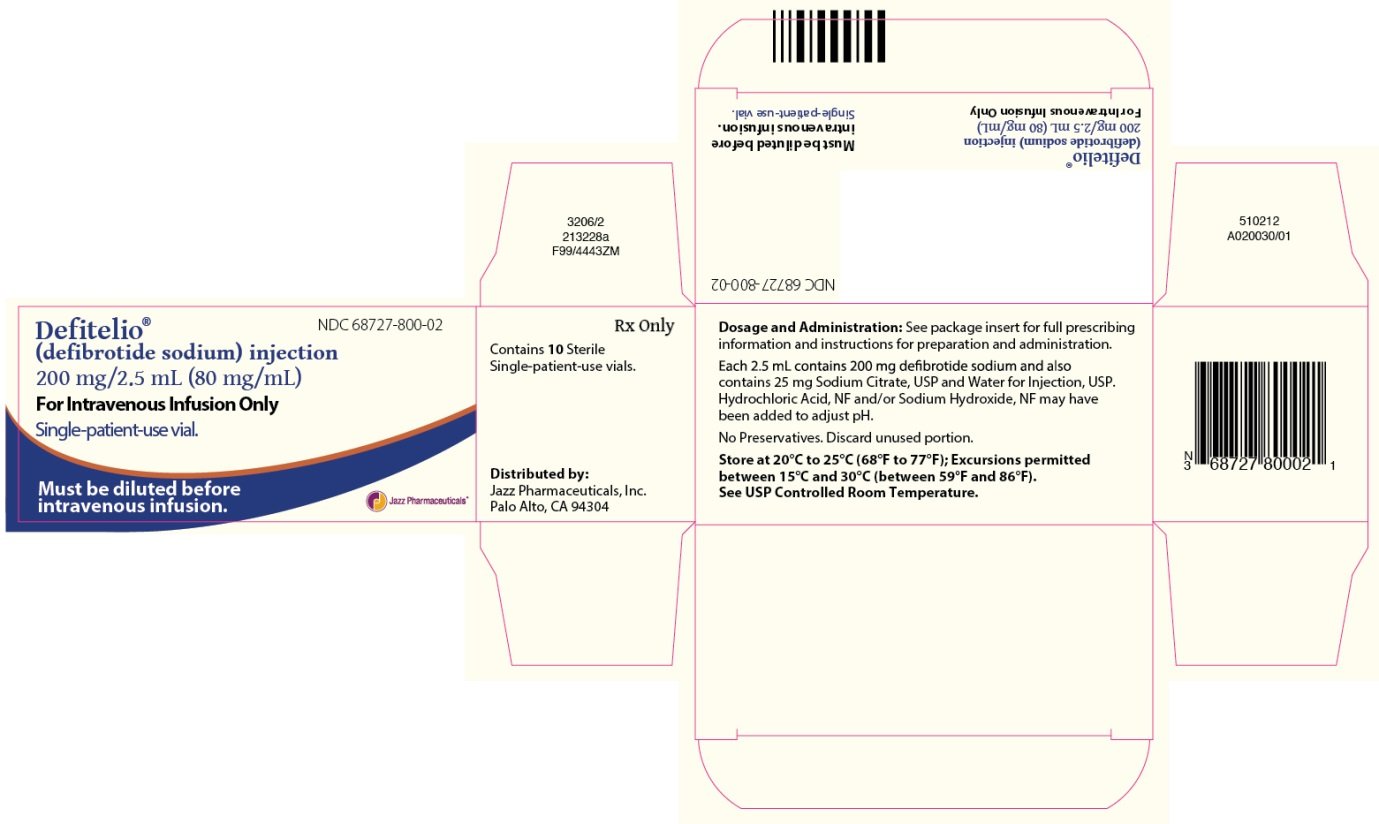 This product's label may have been updated. For full prescribing information, please visit labels.fda.gov.